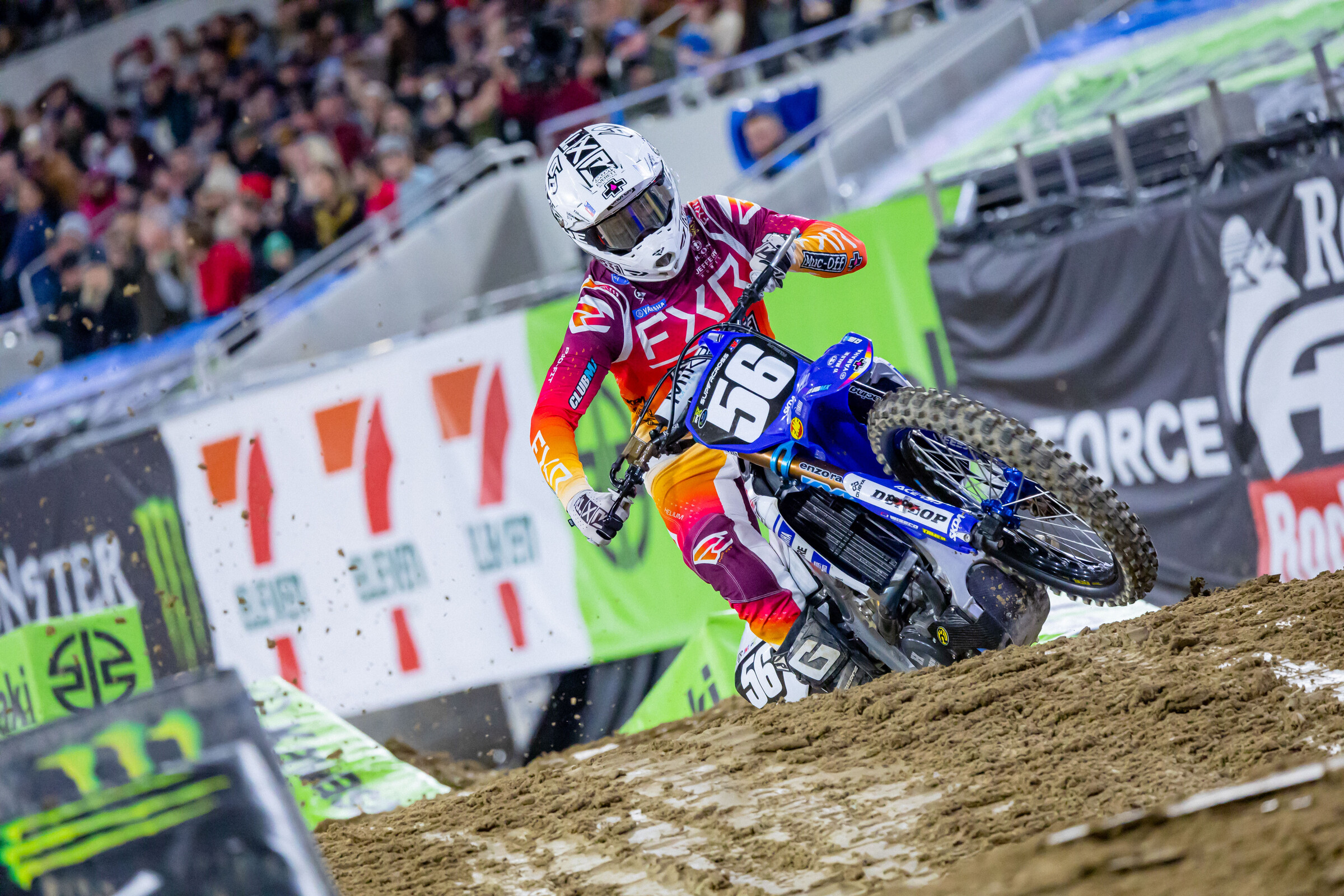 Between the Motos Enzo Lopes

Muc-Off/FXR/ClubMX Yamaha’s Enzo Lopes has had two very solid weekend’s to start his 2023 Monster Energy AMA Supercross campaign. The Brazilian was fast all day in Anaheim before a bad start held him to P6 on the night but then at San Diego he holeshot his heat race before finishing second and then started in second in the main event before finishing fourth. He still wasn’t quite the pace of Jett Lawrence, RJ Hampshire, or Cameron McAdoo ahead of him, but he is certainly looking capable of mixing it up this year.

After the fourth place in San Diego, we caught up with Lopes to hear what he thought of his night.

Racer X: Good all day, good in qualifying. Led the heat race a little, got up front in the main. Overall, pretty good even though you just missed the box.
Enzo Lopes: No. It was unbelievable for me. It’s a personal best to get fourth, but like you said, the whole day felt incredible. Good in practice. Good in the heat race to lead a few laps and Hampshire got me. I was struggling with my starts, to be honest, before then we worked really hard this week at Club. Then to pull a holeshot in the heat and a really good start in the main, it was pretty good. In the main, I rode that pace for a bit, but I’m just missing that endurance. But I’ve just got to keep progressing. I’m super happy that I have the speed. Right now I believe I’m one of the guys, whereas before I never really believed because I never had that speed. So, I’m just super stoked and happy to be here.

Last week you kind of started behind everybody and had to catch up, so this week being able to get up there with them, did you learn some stuff about what they’re doing or anything you can take into next time you’re up there?
Just learning to be in that position. Two weekends ago at A1, I was there in the heat race but it’s not the same in the main. Then in the main, Hampshire hit me on the start, so I was dead last, whereas this weekend I started in second behind Jett. It’s just being in that position, running that pace, feeling comfortable being there. Something I’ve never dealt with before. That’s what I learned. Just super, super grateful.

Going back to that heat race, obviously a weird deal with the red flag coming out. How hard is that to reset? They put you back in front again, which was another thing, and then you had to try to hold off Hampshire.
It was different. I’ve never had that happen. I didn’t know what was going to happen with the board, because we had the 30-second board, and he would turn sideways. I don't know if we should go or wait for the green flag. So, I was all over. I didn’t know. Then I was in front of Hampshire, then he was applying pressure to me again. Then you go from like 2,000 heart rate back to 130. So, it’s kind of like doing intervals on practice days. Super different, but it was okay. I hope the guy that crashed is okay. That’s the main thing.

Talk about the track a little bit. It kind of changed throughout the day. It was softer earlier, then it kind of got hard and slick by the end. How did you work with your setup a little bit to adapt to that?
To be honest, we went a little bit higher on my forks because my bike wasn’t turning that well because the track was tighter than we thought it would be. But for me, it was technical, and I like it because it suits my style better. But overall, I feel like after track walk, I was thinking too much about the dragon’s back, which turned out super fine. But other than that, the track was awesome. It got pretty gnarly by the main event, all the ruts and stuff. But I would say first and second practice, it was the gnarliest. It’s been the whole day with all the ruts. It was overall a nice track. I liked it.

If someone told you coming into the season that you’d roll out of A1 and San Diego with these two results, would you be pretty happy?
I would, but I expected that of myself. Like I told everyone else, no one really talked about me. They were going to say Phil was going to out-perform me. I’m like, are you f***ing kidding me? II knew how I was feeling at Club, after I got my surgery on my arm and fixed it. So I knew coming in, I would be good, but it’s one thing when you feel it and another thing to do it on race day. It’s completely different. So, I kind of expected it, but I’m super happy still. I just want to make that dream come true of getting on the box.