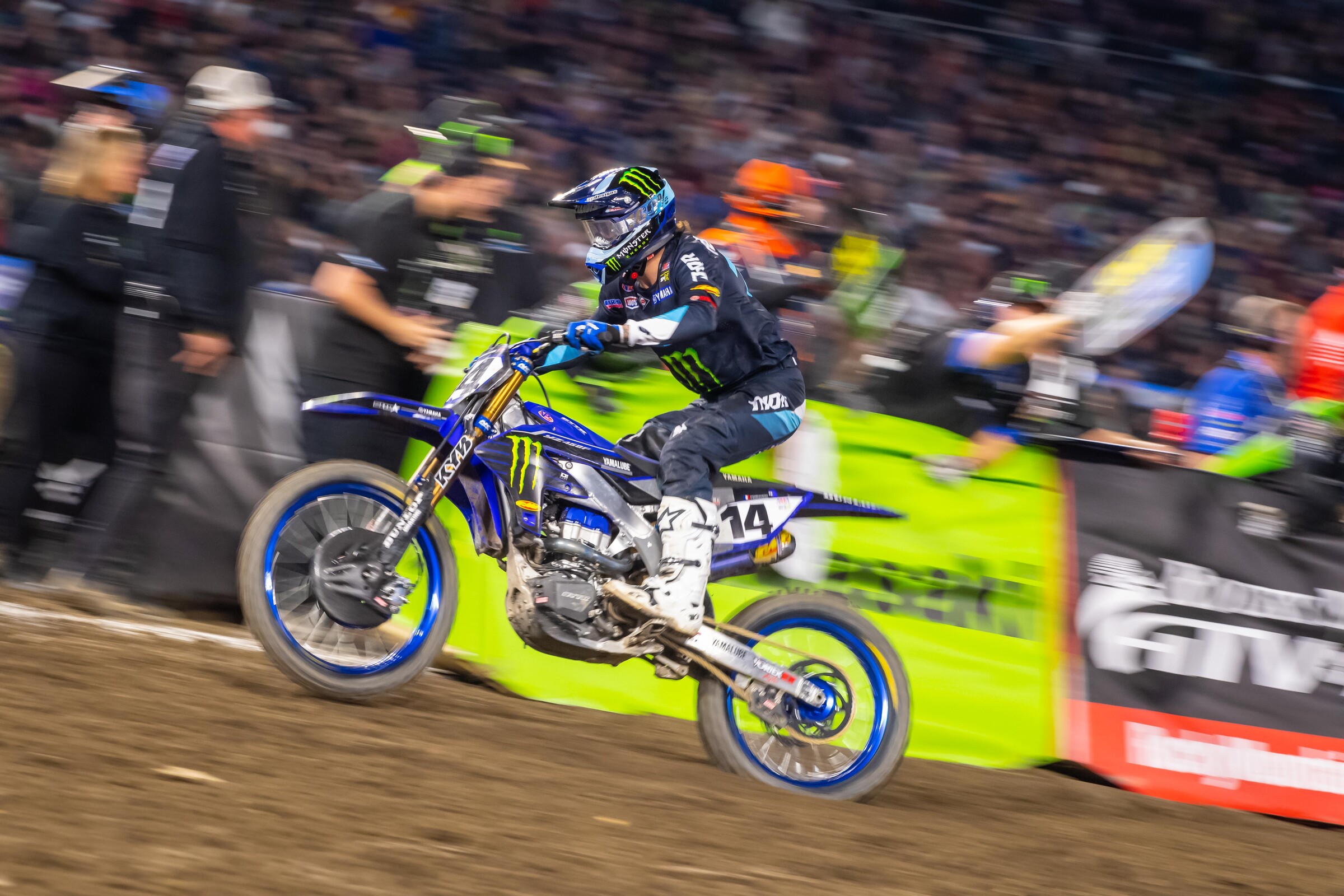 The Elephant in the room, or in the pool, in the case of this weekend, is the weather that California has been experiencing—by now anyone out west is absurdly tired of the term, atmospheric river! The deluge soaked just about every square inch of the state, leaving the dirt in Snapdragon Stadium totally unfit for track building. Thankfully Feld has a plan and is removing that dirt and replacing it with dirt that can actually be formed into supercross features. Odds are it’ll still have moisture in it, but it’s got to be much better than what was in the open stadium. How much better? We’ll see this Saturday. -Aaron Hansel

Even though we’re only one round in (at round three!), things are looking good for Dylan Ferrandis. The Monster Energy Yamaha/Star Racing rider struggled somewhat in his first two years in the 450SX Class but came through the field at the opener to finish fourth. We spoke with him afterward and he told us he really, really likes the feel of the new Yamaha, and that he’s had a good feeling about it for a while now. We’re still early in the season, but things seem like this just might be a breakout year for Ferrandis. We’ll see how things play out in San Diego. – Hansel

Malcolm Stewart getting his first 450SX win is something that’s been talked about over and over, and for good reason—he’s been tantalizingly close to lighting the torches for a long time now! Well, two weeks ago he sure came close when he found himself leading for several laps in the 450SX main. We all know what happened, Chase Sexton passed him, and Stewart would later crash in a rhythm lane, but still, Stewart looked very strong out there. With speed like that, you have to think that first win is just around the corner for Stewart. -Hansel

To the Shock of Nobody

To the surprise of approximately zero people, Jett Lawrence was fast in Anaheim. After taking the holeshot the Honda HRC rider pretty much checked out and never looked uncomfortable for even a moment, which is pretty impressive considering how technical the track was in spots. One race doesn’t make a season, however, and while he’s clearly the favorite this season for every race he lines up for, he isn’t going to win ‘em all. And depending on how the dirt stacks up in San Diego, we could be in for an extremely rutted and treacherous track, where survival becomes more important than winning. -Hansel

Everyone works hard to continuously improve and evolve, but Max Vohland really seems to have taken home the award for most improved over the offseason so far. Vohland has been the subject of plenty of criticism for his short-lived performance in supercross last year, but he was head and shoulders better at A1. He was fast in practice, looked comfortable, and ran as high as third in the main event before he ended up in fifth. Yes, podiums and wins should be the goal for a rider employed by Red Bull KTM, but Vohland’s performance at A1 was a big step forward from where he was in 2022. Will he take another step forward this weekend? -Hansel

The winners of the last four Monster Energy AMA Supercross titles went 1-2 at Anaheim 1 with Eli Tomac (2020 and 2022) winning ahead of Cooper Webb (2019 and 2021). Normally Anaheim 1 seems to provide some shock winners or results but the top two ended up showing why they have been the championship rivals the last few years. But the oddity of the first round coupled with an even odder weekend off right after might make San Diego this weekend perhaps the most unique early season shake up yet. If Tomac and Webb are just as good this weekend, it might set an alarming trend for everyone else much earlier than we’re used to. –Kellen Brauer

One Under the Belt

Adam Cianciarulo and Christian Craig both came into Anaheim 1 with question marks as Cianciarulo was coming off another injury riddled season while Craig was making the leap to the 450SX class full time. They both ended up crashing in the exact same set of whoops in Free Practice at Anaheim which somewhat set the tone for their days. The potential for both riders is very high and it’s only a matter of time before one or both of them light up the time sheets in qualifying or perhaps make a dent in the main event. Christian Craig was born just about 15 minutes from Snapdragon Stadium also and maybe the hometown vibes kick in for him this weekend. –Brauer

Muc-Off/FXR/ClubMX Yamaha’s Enzo Lopes turned quite a few heads when he qualified fastest in the first qualifying session of the 250SX West season. He eventually qualified third overall and finished sixth in the main event, but he was maybe a good start away from battling for the podium. Lopes was solid in 2022 but the speed he displayed at Anaheim was a different level for the Brazilian. If he can keep the ball rolling, the podium is just a few steps away. –Brauer

Unfortunately, some bad news did come out of the weekend off as Red Bull KTM’s Marvin Musquin crashed earlier this week while training in California and injured his wrist in the process. The team did not disclose a timetable for when Musquin might return to the track in what many believe will be the final year of his career, but it doesn’t sound like it’s going to be any time soon. Hopefully he has a speedy recovery, and we will see him back at full pace in the second half of the season. –Brauer

Snap Back Into It

With 14 whole days separating the first and second rounds of this series, it presents uncharted territory for many riders. Usually Anaheim is full of nerves and jitters but riders can usually find more comfort within themselves by the second round of the series once the initial hype has calmed down. With the weekend off, it feels like it’s calmed down completely which means getting back into a racing mentality this weekend could affect some riders. Whoever used this little break most efficiently could come out firing on Saturday and possibly give us some surprise results. –Brauer