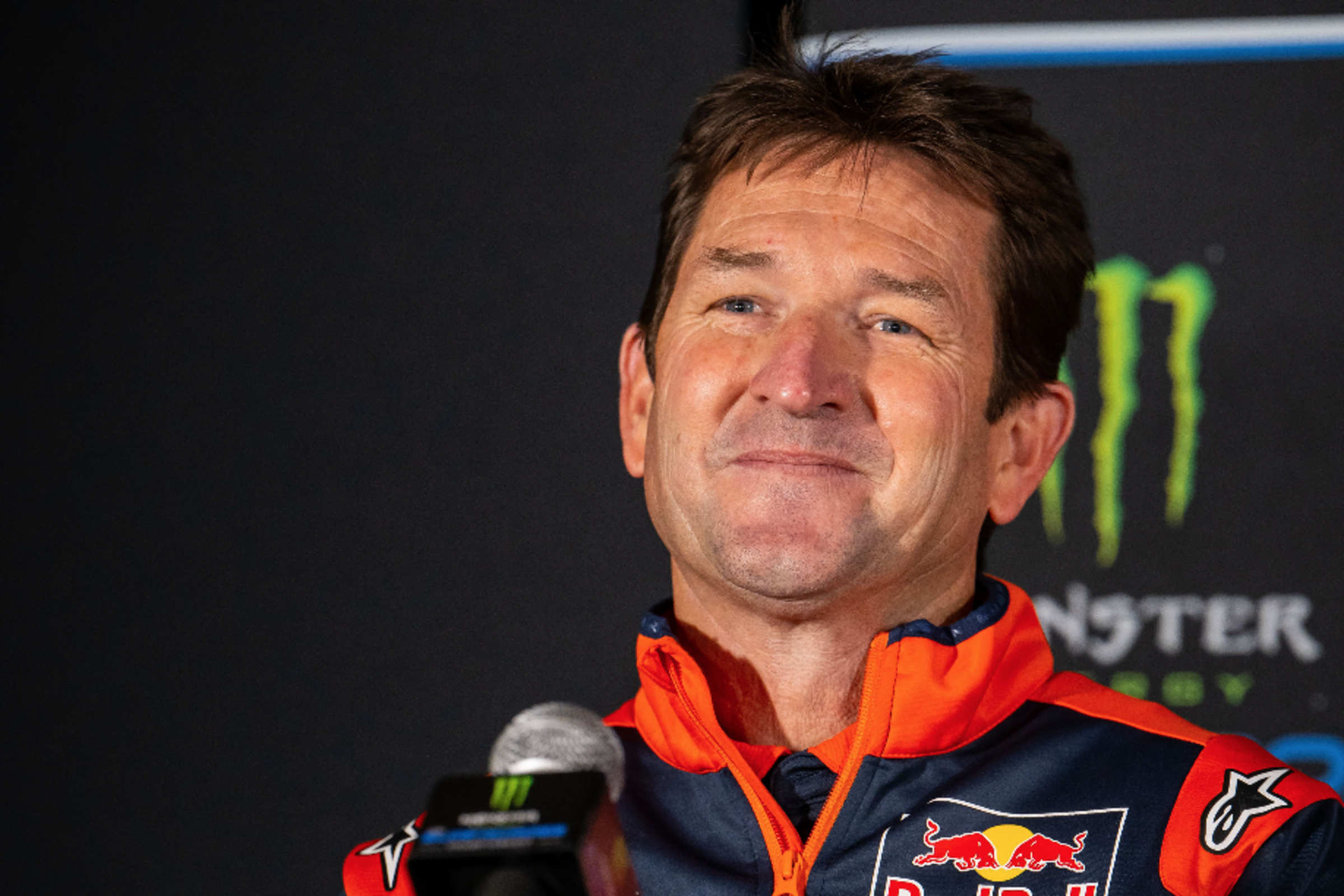 Between the Motos Ian Harrison

Volumes need to be written one day over KTM’s 2022 season, which started with so much promise of new motorcycles and big-time defending champions, like Cooper Webb in Monster Energy AMA Supercross and Jeffrey Herlings in the FIM Motocross World Championship (MXGP), but fizzled out with Webb and his U.S. teammates logging sub-par seasons, and much chatter (most not good) about the new bike. Marvin Musquin delivered one win, the only one for a KTM 450 rider during the year. Herlings, meanwhile, never even raced due to injury.

Red Bull KTM is a proud brand so you know the team would not settle for another rough season. On the new SMX Insider Show, Jason Weigandt and Daniel Blair chatted with Red Bull KTM Team Manager Ian Harrison to see how the off-season and Anaheim 1 Supercross went.

Racer X: Ian, I know the team didn’t win Anaheim 1, but with Cooper Webb finishing on the podium and passing a lot of guys to get there, it had to be a sense of relief. He listed this unbelievable list of parts that were changed on the bike compared to last year. From your perspective, did that work pay off at Anaheim?
Ian Harrison: Yeah. A lot of those parts he mentioned, we actually went through them at the end of last season, in supercross. It wasn’t all new, but we basically, through our testing, both in the off-season and what we learned in supercross [last year], we basically knew we had to start with a blank page. So we were lucky enough to get some data acquisition from our MotoGP department, we got a good test rider and we just ran through every single setting we had. We were out there for several days, and it gets a little boring. But I remember going through all of these things, and then I said “Wait, what is that one?” That’s when he knew we had hit it. So we used that for our base and we moved forward from there. That was right about the middle of November.

In the press conference you mentioned you had five riders on five different settings. What is the off-season like when you’re working with five different guys on five different settings? Did they learn from each other? Did they not? Seemed like a pretty complicated process?
It was. And even this weekend they all stayed on their own separate setting, which is surprising to me, generally you have one of two of them that are pretty close, besides just springs or something like that for their different weights. We kind of just let it go. From that data test and having good people help us with it, what we found out is that the bike has a pretty broad setting base, but if you go extreme one way or the other way you can definitely fall off the edge. I think that’s what happened in supercross in 2022. We would go from one side to the extreme of the other side. Yes, the bike wasn’t perfect, but neither was Cooper. It was a combination of both of them that contributed to the lack of results.

Watch the SMX Insider episode 6 where Blair and Weigandt break down A1 and catch up with Ian Harrison:

Well again, coming into the season with all that testing, part of that testing is that 250 program as well. Maximus Vohland is coming into his third season but due to injuries he’s only ridden a few actual supercross races. Were you surprised how veteran-like he looked that day? No big mistakes.
Yeah, I was impressed. This was his first off-season that he spent in Florida, and we had a lot of support from Austria, especially on the engine side this off-season. We really focused on that and we made some big steps forward. It seems like it really translated for all the guys who rode that bike [Note: Rockstar Energy Husqvarna’s RJ Hampshire, who finished second, is on a similar machine under the KTM Group umbrella]. I was really, really happy. I think he just needs to put more of the laps together, they seem to drop off a little bit. But once he gets that we should see him be able to fight for a podium position.

I know the result probably wasn’t what Aaron Plessinger wanted, but from what I saw, especially in practice, he was more aggressive. He wanted to get out front. What do you make of his day and night, outside of the result?
Jason, I’m with you 100 percent. He looked good from the very first time he went out on the track, and it’s been like this pretty much since December. He’s had a lot of good days at the test track, and he’s stayed with his bike setting. I was really happy. Getting out first in practice, getting good starts and pushing, and even in the main event he was riding really good. When he and Jason [Anderson] got into their battle, it didn’t seem like that was his cup of tea. It didn’t really go well for him and he tipped over. But to finish seventh? I was happy for him, and the whole day, we didn’t really make any changes, and he’s definitely a huge step ahead of last year. The things we learned from that data acquisition, they applied to all of those guys. Even thought they’re on different settings.

So overall then, like I said, you didn’t win Anaheim 1, but were you and the team happy with what you saw?
Yeah. Because I was holding my breath, man! [Laughs] Because you never know how it’s going to go until you’re in the thick of it. Yeah, I was happy. It was nice to see Coop, how well he did, and Aaron. Marvin had an off day, but some of our other guys from our group, with other brands, and they did well, too. So I feel like we’re pretty solid.