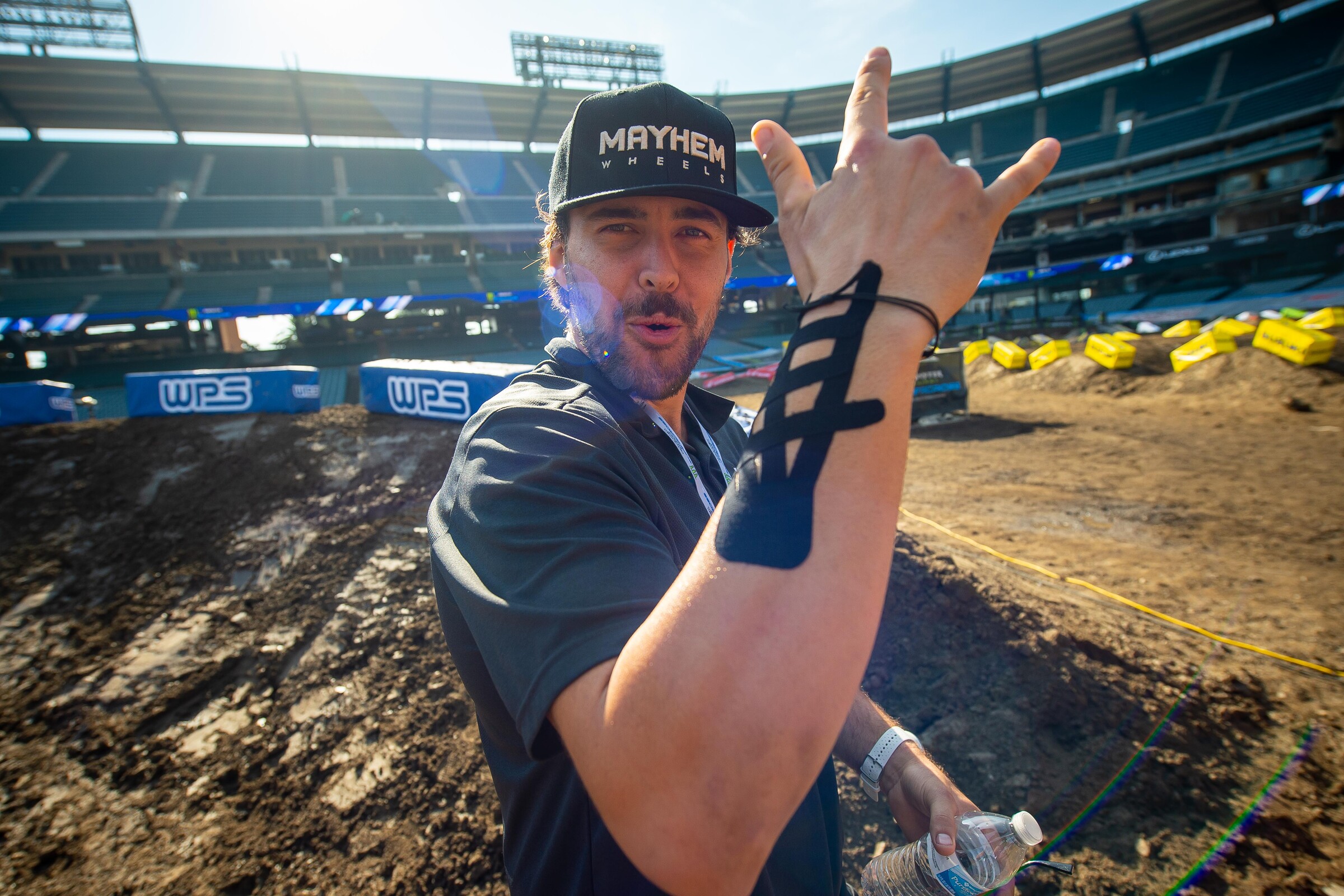 Anaheim 1 went off this past weekend without one of the sport’s most popular privateers out there. Adam Enticknap, who’s been riding with the Twisted Tea/HEP Motorsports Suzuki guys the last couple of years, has decided to hang up the boots. The 722, known for his gregarious personality and rapping skills, will be missed out there. On Monday night’s PulpMX Show we talked to Adam about why he decided that was it and what’s next.

Racer X: How are you?
Adam Enticknap: I’m alright. I’m a little bummed.

So, you hung up the boots. Take us through this a little. We’ll talk about what you’re doing but talk about the decision to sit out.
Pretty much what happened was two years ago in Orlando, kind of during the COVID season, I had a really big crash in practice. I hit the side of my body super, super hard. After that, I had some nervous system problems after that crash in Orlando and then all through the summer. Then tried to work it out. Tried to get through it. Was on some different medications and all kinds of stuff. It was getting better slowly, and it still has, but I just haven’t been the same mentally and physically. I kind of told myself if I was getting better at it, I would race until I was 45 years old. It was one of those things where that crash messed me up just enough to where I felt like I couldn’t put my best foot forward. I made the decision with my wife and I. Just time to move on. Time to start moving forward.

Is it tingling? Is it numbness? What kind of symptoms do you have?
No. So, what happens, I don’t really want to get too in depth with it. I damaged my vagal nerve, which is right by your collarbone. I started to develop anxiety, but kind of to an extreme. I never even knew what anxiety was in my entire life. Like, I didn’t even know what it was. I literally didn’t have a care in the world. I had no idea. After that crash, my right side was so damaged, and that vagal nerve is one of the major nerves that runs your body system. One of the biggest problems that people don’t know is they don’t know very much about your nervous system. They can’t really fix it. They can’t go in there. They can’t do anything. You kind of just have to hope it heals over time and do the best you can to manage it, and that’s what we did. But unfortunately, it’s just taken way, way, way longer than I thought it would.

Tough decision, for sure. JT, you talked about your first Anaheim. You were happy. You were gassed that it was over. You ran out of gas. You were fine watching the races. Brayton told me a few times. “Look, man. It always ran poorly.” That’s why you quit because it goes south, so I’m on top kind of, so I’m going to step away.
Jason Thomas: I woke up every race day morning, like a pit in my stomach, super nervous. I remember waking up that A1. I was staying with Forrest Butler in his motor home. I just woke up stress-free. I was like, this is going to be an awesome day. I get to go to the race. I get to watch it. It was such a different feeling. Now I feel it every Saturday. It’s normal. But it was such a stark contrast to every other race day morning.

So how were you on Saturday, Adam? You weren’t there, but you knew what was going on. All your friends at Anaheim Stadium. How were you doing?
Dude, I’m bummed. It really sucks. On the contrary to a lot of racers in our sport, I hated working hard. I always hated working out. It was the worst part. But something about riding a dirt bike and racing, I just had so much fun doing. Enjoying hanging out with all the fans and just being there at the races, enjoying the challenge of every weekend getting better. Towards the end of my career, I was really enjoying that I got to do something that was so hard. Not very many people in their lives get to really do something that’s that difficult and that’s just one-off.

Every day I woke up like, damn, this is so cool that I get to do something that is this difficult and I’m actually halfway decent at it. It made me want to get better and better every single day. I loved the racing aspect. You could go there, and it was like, all that work that we put in, we could get better. Then at the end there, I did some testing for the team, and I got to have some input on some of that stuff. So to see it kind of help the team as well was really cool.

Okay, so you’re still riding!
Yeah, I ride all the time. I absolutely love it. It’s getting back. I just can’t put in the gnarly days where my body gets super, super fatigued. That was the biggest problem with what was going on. The more I pushed it, the more my body reacted the wrong way. We were trying to figure it out, but it just wasn’t enough.

That’s cool, you get to ride. Moto, not supey, I’m assuming?
I wish I could ride supercross. There’s just no little supercross tracks that are ready to go around here. I’m sure if I lived down south, I’d just go ride on supercross because it’s so much fun to me. But, just local tracks, outdoors. It’s actually really cool because something I’ve never got to do was ride during the wintertime on all these cool outdoor tracks. Every year it’s like supercross, supercross, supercross when the rain comes around, and we’re all like shitting bricks trying to figure out where can we ride because it’s raining. You’ve got to ride these supercross tracks and you’re stressing out. Now, when it rains, the hills are unbelievable out here. The sand tracks are awesome. The outdoor tracks become even better. It’s unreal. So, that part has been fun.

You’re moving on, though. You’ve got some cool things lined up. Feld guys are stepping up and putting you to work.
Yeah. The reason why I was in San Diego is I was at the first round of Monster Jam, which Feld also owns. I got to do kind of like my first practice run. I’m the color analyst in the booth for this year’s Monster Jam season. So, I’m really excited for the transition. I kind of get to step into something that’s totally different, which is cool for me because I love getting better and better at stuff. It’s pretty similar in ways - obviously it’s quite a bit different because it’s four wheels compared to two wheels, but it’s still dirt. It’s still jumps. It’s still the crowd. I’m having a lot of fun doing it.

So, are you on the live PA or are you up in the booth? Where are you at?
So, I’ll be on the broadcast where it’s televised. So, kind of like what Ricky [Carmichael] does with Leigh Diffey. I’ll be kind of doing Ricky’s spot for Monster Jam.

Don’t take this the wrong way, but ‘Yay, he crushed all the cars! What are they doing? Pete, look how far he flew!’ What are we doing? I don’t get it.
It’s so much more in depth than you would think. One of the biggest things about Monster Jam that people don’t know is keeping your truck together is like part of it, and why Ryan Anderson and some of the other drivers are so much better at it is because they don’t just send their truck into oblivion. There is actually racing in Monster Jam. There’s three competitions per event. It’s two-wheel skills, racing, and freestyle. It’s actually pretty crazy how skilled some of these dudes are. I kind of thought the exact same thing when I first got into it. You jump a jump across the stadium, and you hold the truck wide open. What do you mean? But it takes a lot of skill. There’s a lot of little landmines and how you maneuver the truck. Those backflip ramps, you can see the guys that are really good at it, how high they can get with the truck, depending on when they hit the throttle, when they lift on the throttle. Like I said before, a lot of it is just mechanical.

There’s a twelve-round series. I think the biggest difference between mechanicals in supercross and in Monster Jam is these guys run it, so it breaks no matter what. It’s not like they replace the part early. If something is going out, they just run the thing until it breaks and then they better hope that that part you can fix in-between one competition to the next. So, it’s been pretty interesting. The deeper I get into it, it’s pretty awesome. Those trucks are badass. If you get a chance to go look at them, they are freaking unreal. There’s 1500 horsepower coming out of those methanol trucks.

Does [Dave] Prater [from Feld] reach out to you, or do you reach out to Dave? How does it come together? How did this gig come to happen? Props to the Feld guys for giving you a shot.
Yeah. That was all me actually contacting Dave at the end of the supercross season. I wasn’t final at the end of supercross if I was going to retire or not, but I reached out to Dave Prater and said, “Hey, I’m interested in getting into some announcing stuff and working with you guys. I’d love to come over and check it out.” It was kind of like, yeah, this is the spot we’ve got. One of the drivers, Colt Stephens, was in the booth last year and decided he wanted to drive a truck and so he moved down. Everything kind of fell into place.

Are you still going to do some rap stuff?
Yeah. I’m right in the middle of working on an album. I’m actually going to release that song, “Hey, Momma” here pretty quickly, like within the next month, which I got a really big response. I don't know if it’s going to be as rappy as it was before, but I’m definitely going to be doing more music. I’d love to do that as a side gig on the side. It actually does make quite a bit of money, which is pretty cool. Obviously, it’s not enough to make a living, but if I can do it as a hobby and it’s something that I love to do and it makes money, then hell yeah, I’m going to do it.

Listen to the full interview starting at the 3:04:00 mark below: