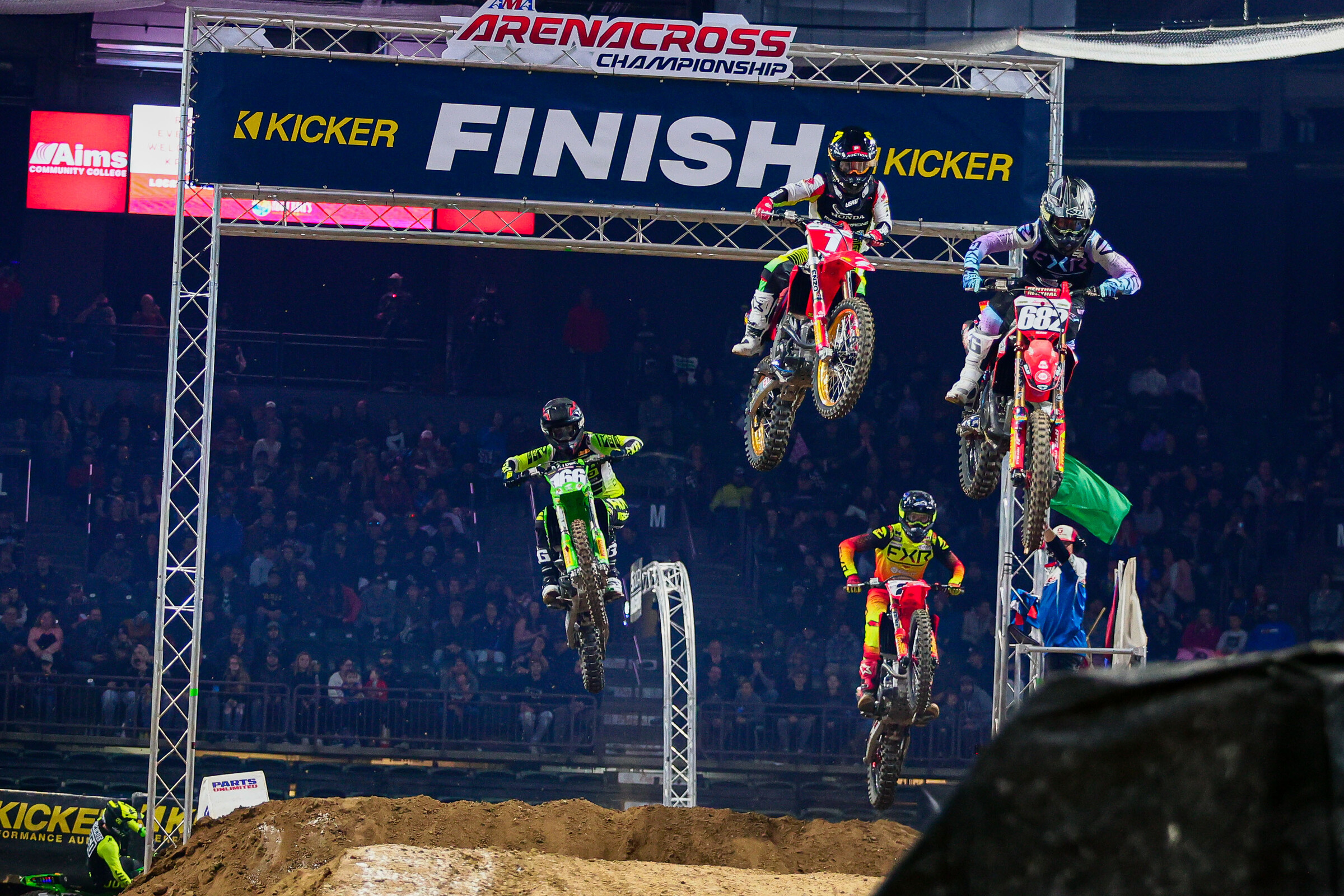 A nearly full house of race fans showed up to watch the best AMA Arenacross Championship riders in the country race at the Budweiser Events Center in Loveland, Colorado. The night held several great battles in various classes throughout the night and several races came down to last lap, last corner duels. The whoops were especially tough, which really had a lot of riders struggling.

There was great, competitive racing all night long, but the “Fast 4” (Kyle Peters, Kyle Bitterman, Izaih Clark, and Chandler Baker) did take their respective heats with comfortable leads and very few lead changes.

The “1v1” race was one of the more interesting races of the night. It’s a true sprint, with only three laps and two competitors chosen by the fans in the stands. The base $500 purse was built to $1k by the fans, so there was a fair amount of coin on the table. Can we say a dash for cash! Carlos “Flying Taco” Short from North Carolina ended up taking the win plus a cool grand in this action packed three lap “Mano a Mano” sprint. The Flying Taco had to battle Blake Smith for the money, and they fought very hard, though they both had areas they were stronger than the other. Smith got holeshot and led until the first trip through the whoops, where Short used his superior whoop speed to take over the lead. Things heated up on the second lap when Smith passed Short in turn two and ran him wide, which meant Short had to shut off or crash. Short backed off, but immediately regrouped with a blistering charge through the whoops and returned the favor in the last corner, running Smith wide. Smith didn’t back off and went down, leaving Short to take an easy final lap, the win, and the dinero.

The main event was the first time we got to see the “fast 4” all on the track at the same time. Iziah Clark took the holeshot and led the first lap and a half, but North Carolina’s Kyle Peters showed why he wears the #1 plate, put in a clean pass on lap two and slowly but surely opened a gap, eventually winning the race over six seconds. Behind him, the battle was just getting started! After being passed by Peters, Clark seemed to lose a little momentum and fell prey to Bitterman. Bitterman was riding perfect, but Clark regrouped while he was following and eventually made it back by a few laps later. Once in front of Bitterman, Clark actually closed on Peters for a lap or two, but Peters picked up the pace in the final laps. All three were separated by several seconds at the finish. Honorable mention goes to Chandler Baker, who was a very close fourth for the early stages of the race but went down. He remounted and pushed hard for several laps, closing on Clark and Bitterman, but backed off a little at the end when he saw the gap was just too large.

The B main had some excitement when Adam Conway took the holeshot and led the first two laps. Sadly, he took a nasty spill on the third lap and was slow getting up. Robert Fitch took over the lead and was never challenged. Shout out to Nick Jones who was the only pro rider on a two stroke and struggled most of the night. In this race, all of his struggles evaporated, and not only did he find himself running in third after Conway went down, but he was catching second and would have likely been able to pass him if he just had one more lap. The crowd loved that ride!

The final race of the night was the second Pro Main, which has the added twist of inverting the field from the first races finishing order. This saw the top half of the field from the first pro main starting in the second wave. Braden Spangle was fastest off the line, with Aaron Siminoe hot on his heels. Bitterman had a brilliant first lap and took over third as they began the second lap. Peters was only two spots behind Bitterman, but Clark was mired pretty far back. Spangle and Siminoe continued to lead with the gap staying fairly constant for several laps as both Kyles played it conservative, waiting for mistakes. Those mistakes came just shy of the halfway point when first Spangle, and two laps later, Siminoe, both crashed hard. This handed the lead to Bitterman with Peters in tow. For a while, Bitterman held onto the lead but when Peters started pressuring him, Bitterman started taking defensive lines, which slowed himself down a tiny bit. This was all the opening Peters needed and he pounced. Once in front, Peters pulled his famous disappearing act and checked out. For a few laps it looked like Bitterman might fall into the clutches of Clark, but Clark started to fade, probably due to how hard he had to ride to get through all of the traffic from his slow start. In the end, it was Peters for the win, Bitterman second, and Clark third.

AX Pro Championship Standings After Round 3

All in all, it was a very exciting night of racing, but Kyle Peters remains in control. Next up, the series heads to Prescott, Arizona, for racing on Friday night, January 13.