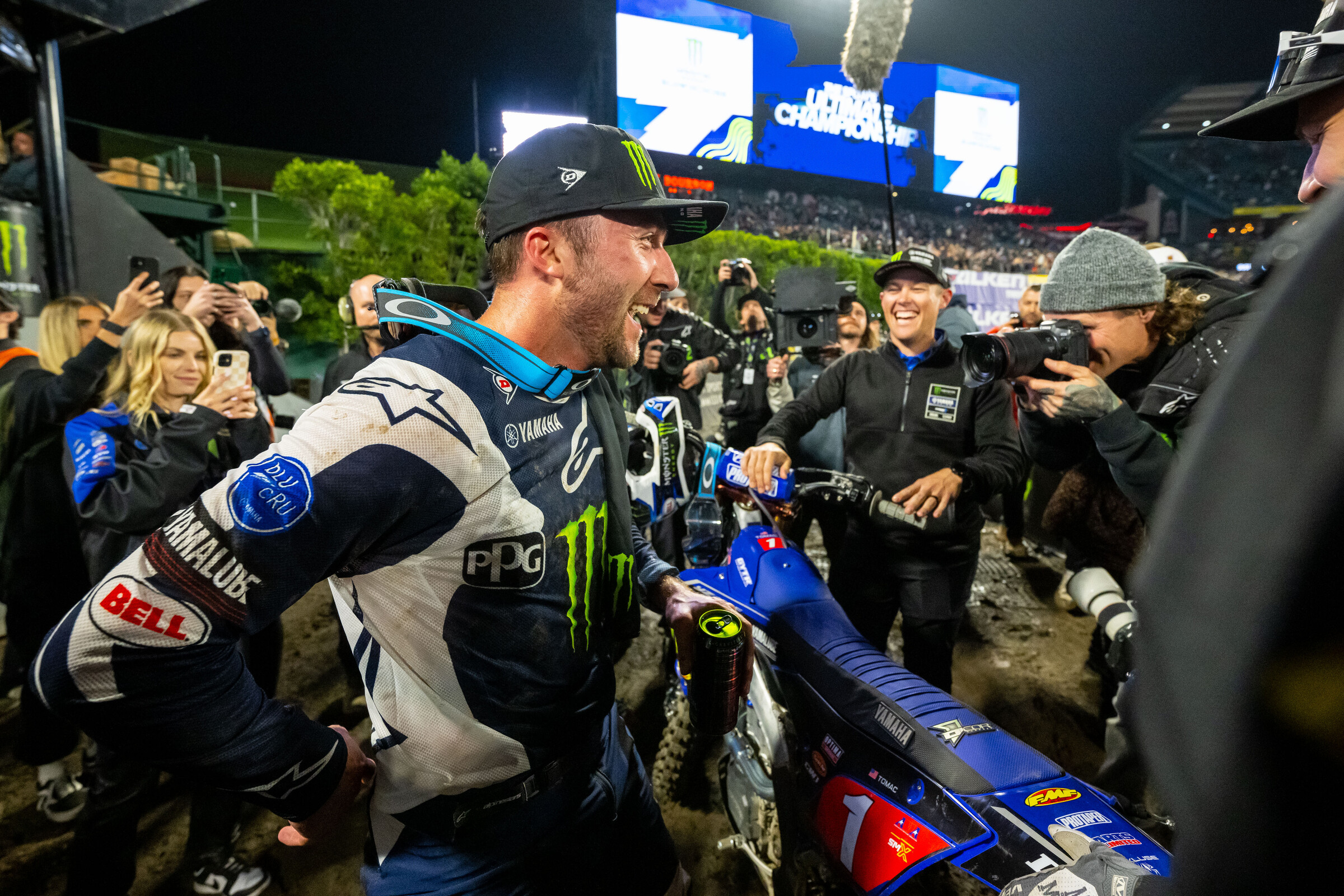 It might seem normal to hear about Eli Tomac winning a race. He's rapidly closing on the legendary Ricky Carmichael on the career supercross wins list and is certainly considered an all-time great. But one win usually doesn't come Tomac's way, and that's the Monster Energy Supercross opener, which Tomac has never won in nine tries. In fact, he rarely even grabs a podium at the first race!

Looked like he was in trouble again when he dropped his Monster Energy/Yamaha Star Racing machine while leadind, but this track was super tough, lashed by rain all week and covered in ruts. These conditions led everyone else to have mistakes, too, and Tomac was able to pick his was back to the front and win. A significant first for him, and a great debut for the brand new 2023 YZ450F.

The defending champion talked about it in the post-race media conference.

Racer X: Eli, a lot of wins, and championships. But Anaheim 1 has not been your friend. Today from qualifying to the heat, the main event, you were extremely impressive. Why? New comfort this year? Just a mentality shift to start the season? This was incredible. Why so hot at Anaheim 1?
Eli Tomac: I guess just experience. This is my tenth Anaheim 1 in the 450 class, so apparently it took me ten times to figure it out, [laughs] how to get everything to go the right way for round one, and from pre-season to the race itself. But overall, that was just a wild race. Early battling with Justin [Barcia] there and then crashing up the tunnel jump. I just got a little bit in the backseat of my bike, washed the front end up and then thankfully everything stayed straight. Bars and my clutch was good. I was able to stay within a touch of the front. The track was probably top three on just pure gnarliness, the way the transitions were. You had to time the jumps literally perfect or you’re launching off the track and making mistakes. But overall, such a good start for us, especially on this new platform.

When you got up after the crash, was it, let’s just get some points? Or was it, look up, see the leader and go, no, I’ve got this?
That was not my thought at first. I honestly thought that I threw it away, and I would be lucky to get a podium. But the way the track was, it was so gnarly I guess there was time to be lost and time to be made, for sure. So maybe that was a little bit in my favor.

That first five minutes was great racing from first to seventh. The crowd was super into it. How do you manage it? You hear all that going on. How do you not get overwhelmed and get into mistakes or anything?
You hear it [the crowd], and there’s nothing you can do about it, so it’s just like, can you focus? That’s just part of supercross, though, and that’s what makes it so cool is you hear the action whether it’s you yourself in a battle or you hear something else going on on the track. It’s just something you’ve got to deal with.

Now that you’ve experienced the new Yamaha in a race setting, can you just kind of talk about just how comfy and how confident you feel with this new bike?
I honestly was surprised how good we were for round one, and it being a new bike. It’s not easy setting up a new motorcycle, no matter what anyone says. A lot of times it just takes race experience, period, and being in the moment and learning things. But somehow we did start off in the right spot, and the platform totally performed well. I’ve said this a bunch lately, but the big thing about this bike is it lost a lot of weight and I can totally feel it. For supercross, it’s amazing for changing direction.

You usually do a great job of showing that you don’t care too much about little things, and you only focus on championship. So many people were asking you the question yesterday, do you want to win Anaheim 1? Now you’ve finally made it happen. How much does this mean to you? Or are you truly as stoic as you seem to be? You just want to win the championship? How much does this mean to you?
Yeah, it’s nice to have the win here, absolutely, but I’m always big picture in my head which is racing for the championship.

Eli, we keep talking about how gnarly the track was, particularly I believe the rhythm lane from third base to home base was insane for you guys. But what stood out to you most each lap?
Well, there was that lane you mentioned, the triple, triple, triple, triple. Whatever it was. The first ramp had a massive pothole leading up to the ramp. It was unbelievable. We kind of started way inside, and then that got super steep with a kicker. Then after that, you had to go down the middle of it and just deal with it. Then you tried to land and pick a rut on the next one. When the dirt is like that, it’s really easy to either short or go long on those jumps. So, that’s another thing that’s though to deal with. Then after the start straightaway, that last double into the turn, that thing had a nasty curve in it, too. So, you really had to be careful with your line selection in there.

Eli, a little bit different start to what we’ve seen in the last couple years with the split section and the whoops in the middle of that as well. It seemed like you guys were separated for a lot longer before coming together and we had seen a few crashes. Did you base your gate pick on that a little bit? To try to avoid where the pack comes together?
Yeah, I stayed in the same gate basically all day other than my very first practice start, and I just stayed there which was on the inside gates. It was like gate three from the tunnel. Any first turn can be a little bit sketchy, but I had really good starts today so I was able to luckily stay out of the mess.

What’s your confidence on your bike going into next week?
It was like an east-coast condition, so if you’re going to say my bike works good on east coast! [Laughs.] It wasn’t like the typical hard-pack Anaheim, but overall, I feel very comfortable with what I’ve got going on.