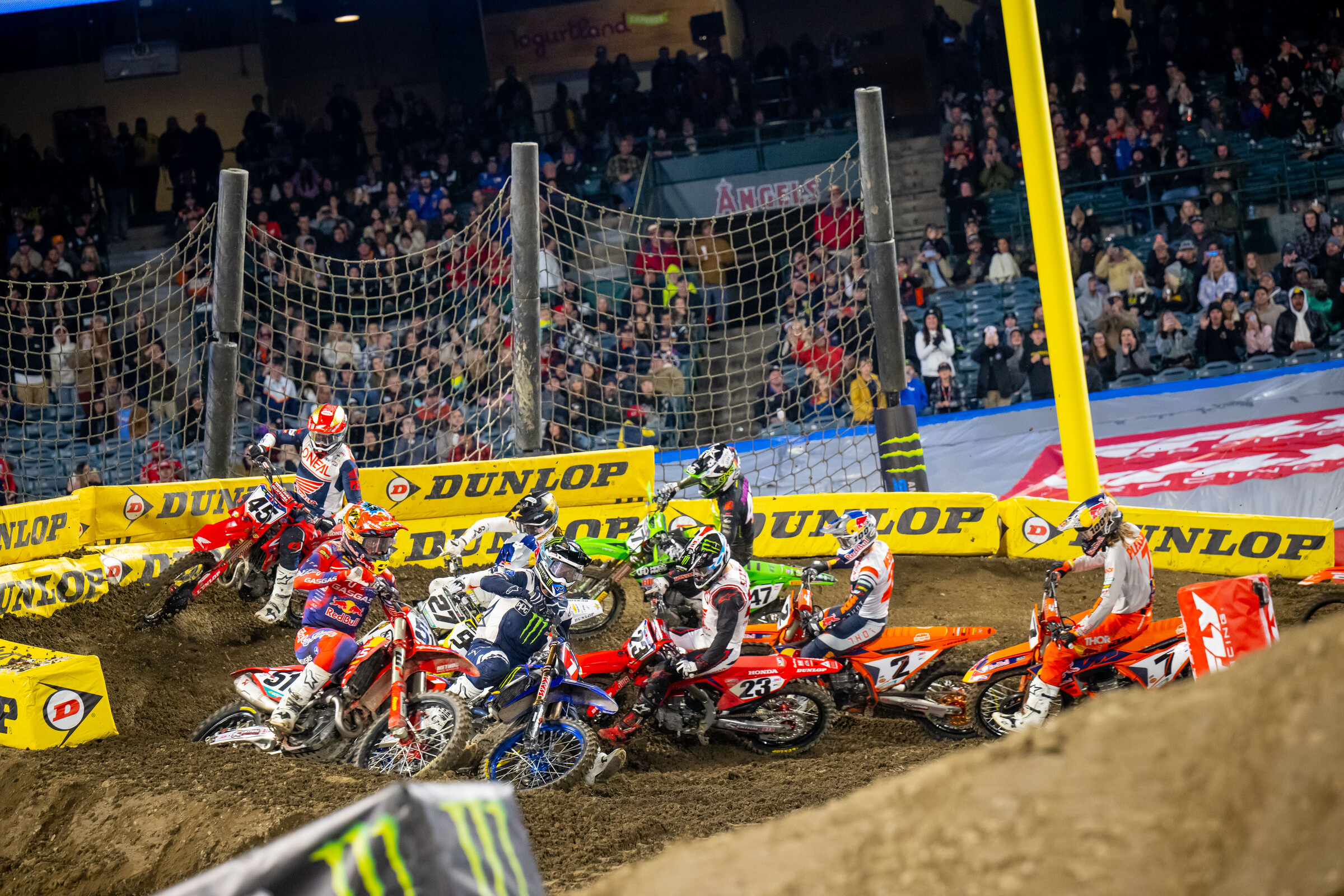 The gates have dropped and the 2023 Monster Energy AMA Supercross Championship is in full swing! With lots of storylines coming from the Anaheim 1 Supercross over the weekend, we fired off several questions to former long-time pro racer Jason Thomas.

Talk about the insane track conditions, specifically the toughest areas and what that leads to with the dynamics of the race.

With so much rain leading up to the event, the base soil was thoroughly soaked simply from a lack of drainage. Luckily, Feld Motor Sports had gotten the track crew inside Angel Stadium early enough to build and cover the jumps, protecting them from the deluge. The tough part of that is the transition between the soft base soil and where it meets the dry, hard jumps. A ledge forms at that transition point and riders often refer to this as a “g-out.” Those “g-out” sections were the culprit for most of the mistakes we witnessed all day and night. There is simply nothing that can be done other than continual track work when possible. Riders will often stiffen their fork setting to compensate for the harsh impact of the ledge but when trying to seat bounce triples, a stiffer setting will only help so much.

Eli Tomac crashed and still won on the new Yamaha YZ450F. Does this mean he's good to go?

He was wildly impressive. Remember, he had never won Anaheim 1 and somehow only had one podium in nine previous attempts. To see him at the front all afternoon, win his heat race, and win despite a crash had to be troubling for his rivals. He’s usually a “start slow and then slowly ramp up” guy. Being that good this early is a scary proposition.

Talk about Jett Lawrence's approach to the day and night.

This was likely the worst I have ever seen Jett look during the afternoon sessions. He looked uncomfortable, unsure of himself, and on the edge of control several times. I expected him to settle for whatever the night brought, knowing things were just not going his way. As we should know by now, though, Jett just pushed all of that out of his mind when the lights came on and won both his heat race and the main event relatively uncontested. The guy continues to find new ways to impress me.

Chase Sexton podiumed and had speed, which was good, but he led and didn't win. Was this a good or bad night?

I think it was a good night but with a caveat. The only thing I wanted to see from Sexton was continuation from everything I saw last summer. I wanted to see the same confidence, the same elite form, and the same ability to dispatch the rest of the field when needed. I believe he displayed all of those things. He is clearly ready to be a contender in this series in 2023. The aforementioned caveat is that when Tomac gives you an opportunity, you absolutely must capitalize. Tomac can be so robotic in his consistency, sucking the life out of anyone else’s championship aspirations. When he throws a lead away, you have to take advantage. Sexton had that chance Saturday and wasn’t able to make it count.

Cooper Webb podiumed last year's A1, and his year then went downhill. Is this podium a sign of life, or not?

I think this year’s podium was more convincing. Last year, I didn’t see a lot of flash from him, and it “felt” like he was just in the right spot in the right situation. This year, he had to move forward and earn it. He passed several of the championship contenders, most notably Sexton late in the race. If you wanted to put one asterisk on the result, though, you could point to the “jumper” whoops as to a possible reason for the success. Due to expected rains throughout California for weeks to come, we may not have a race track that can handle big blitzer whoops for a while. That “did they fix the whoops issue?” question may have to marinate.

Man, what a bummer. Forkner looked like he was “back.” He had that same speed and air of confidence in his riding from yesteryear. I really thought he was going to win A1. Now, we sit and wonder if he is done for yet another extended period. That huge crash down the start straight certainly didn’t look good. I heard he has a knee issue but to what extent I don’t know yet (maybe no one does as of this article). The crash was spectacular, but the dynamic was common. He clipped bars with RJ Hampshire and that sent him to his right. Unfortunately, Cameron McAdoo was there but not even with him. McAdoo was a wheel ahead and caused Forkner to spill over the rear wheel of McAdoo instead of a more helpful shoulder/bars bump that could have kept him upright. When that rear wheel was no longer there, Forkner veered even harder to the right and then catapulted forward as his front wheel finally tucked. It was a brutal turn of events and went about as poorly as you could possibly draw it up.

How did Ken Roczen look on the Suzuki?

I thought he looked a bit cautious. He is not a rider that you typically see with the front wheel high through rhythm sections or mistiming things. The track was certainly a huge factor, but he is one of the most picture-perfect riders in the sport in terms of technique. On an new-ish bike with wildly different track conditions, it shouldn’t be a surprise that he was learning on the fly. I think a fifth at the opener was a very respectable way to kick things off and I’m sure he and his team learned a lot on Saturday. With Oakland looking like more of the same when it comes to adverse conditions, maybe they will have a leg up on where they began last Saturday morning. (Tried for as many subtle kickstart references here but sadly only ended up with two.)

Who surprised you (in a positive way) this weekend?

Enzo Lopes was incredibly impressive. He was near the top of the board all afternoon and backed that up with a sixth in the main event. There are many riders that could have ended up on this list including Colt Nichols, Aaron Plessinger, Mitchell Oldenburg, and Grant Harlan.

Who did you expect more from coming into the weekend that did not deliver?

Jason Anderson was my pick to win A1 but after his huge practice crash and broken nose, I felt that was unlikely. He never looked the same after that which is fair. I do think Anderson wins multiple races this year but much like 2021, he didn’t start the season with the bang he was hoping for.