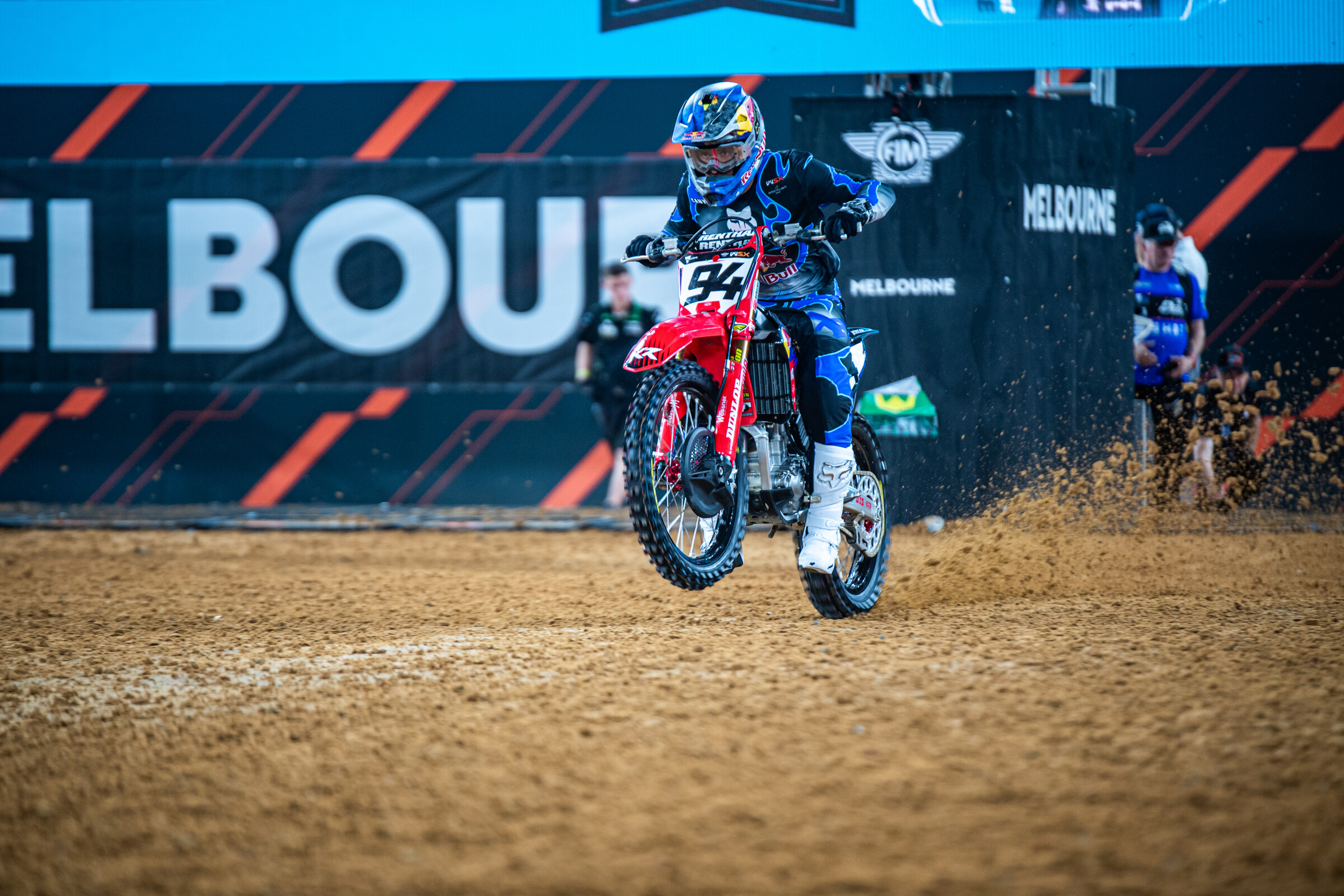 450 Words Roczen Escapes with the Crown

Ken Roczen versus Vince Friese isn’t a title duel you would have expected in advance of the final round of a championship, but in a series that only comprised two events, the short sample size left the door open for the unexpected. Roczen was set to roll to the world title after coming into the finale of the new FIM World Supercross Championship, in Melbourne, Australia’s Marvel Stadium. Roczen, second at the season opener two weeks ago, was the default points leader after Eli Tomac, who won the previous race in Cardiff, Wales, didn’t make the trip Down Under. Tomac wasn’t eligible to win the title since he isn’t part of one of the series’ approved teams, as he was only a Wild Card entry in Wales.

So Roczen was in a great position coming into the race, and then he checked out immediately and won the first of the three GP main events in Australia. He took the lead early in race two, also, while Friese struggled uncharacteristically off the start again. Roczen looked set to dominate until he suddenly got a flat rear tire with two laps to go in the second race. Just like that, Roczen was headed to the mechanic’s area, his race done. TV commentators Chad Reed and Jeff Emig questioned why Roczen wouldn’t just stay out and circulate for points with the rear flat, but the metal ramp jump at the finish line isn’t friendly to flat tires (250 rider Derek Drake suffered a huge crash and a wrist injury trying to jump the metal ramp with a flat earlier in the weekend).

Luckily for Roczen, a few others had gone down and had problems, so he didn’t get last place and still scored a few points despite not completing the last two laps. The beneficiary of all of this was Rick Ware Racing’s Joey Savatgy, who finished second to Roczen in GP Race 1, then inherited the lead to win GP Race 2.

Going into the final gate drop, Friese now held a 1 point lead over his SmarTop/Bullfrog Spas MotoConcepts Honda teammate Brayton, with Roczen four points back. The start was super/ultra/mega critical on a track that didn’t allow much passing, plus, the first turn and start had been causing havoc all night with crashes. Friese didn’t get a good jump, but he cut inside and tried to get to both Brayton and Roczen on the exit of turn one. He ended up missing Roczen but smashing his teammate Brayton, and then they both went down. This essentially eliminated both Friese and Brayton from title contention.

Of course, with a title on the line and Friese behind both Brayton and Roczen going into turn one, you could call it simply desperate times calling for desperate measures. Brayton, though, just traces it all back to Friese's checkered past with rough riding incidents.

“The adversity came from my teammate [Friese],” said Brayton “The guy just keeps doing it over and over, his whole career. Yeah just go ahead and clean me out in the first turn, no big deal, just launch his bike at me and then act like nothing even happened, just like he’s always done. Just crazy, ridiculous, never thought I would be in this position but it’s actually like the fourth time I’ve been in this position, even as his teammate. Yeah, I’m pretty fired up.”

Roczen was able to survive, taking second to Savatgy in the race and overall was enough to wrestle the title away from Friese and Brayton.

“It was an amazing race, I tried really hard but Joey was riding an amazing race and the track was really deteriorating,” said Roczen. “Lots of stuff going on! I had a good start going into the first turn, but I think Joey’s holeshot device was stuck on, then it popped up, and we collided going into the first turn. I almost went down. But it was a fun, race, though. It sounds like I got the championship, which I’m so happy to give that to my team, because we did have to fight through some adversity. The Genuine Honda World Supercross team did such a great job.”

Savatgy’s overall win launched him up to second in the final series standings. Only a bad race in the very first race in Cardiff kept him from title contention.

“It’s unfortunate I had that mistake in the first race in Cardiff,” said Savatgy. “I felt really good considering the amount of time we had on the bike. We did no testing. Mitch [Payton], I can’t thank him enough for getting everything together, and all the boys at Pro Circuit, and obviously Rick Ware. I’ve been fighting demons here all week. The last time I was here, I was carted off with a pretty serious injury. I’ve tried to play it cool all week, like it was no big deal, but mentally it was a lot. It was like facing the devil, looking him right in the eyes and coming back. The crowd was great here in Australia and I’m glad we were able to put on a show for you guys.”

Savatgy, Roczen and Brayton ended up as the top three overall in Australia, with Roczen, Savatgy and Friese top three in points.

We’ll have more to unpack from Australia, but Roczen gets to return home packing the 2022 FIM World Supercross Championship. It was a title most expected him to win, but it certainly didn’t come easy.