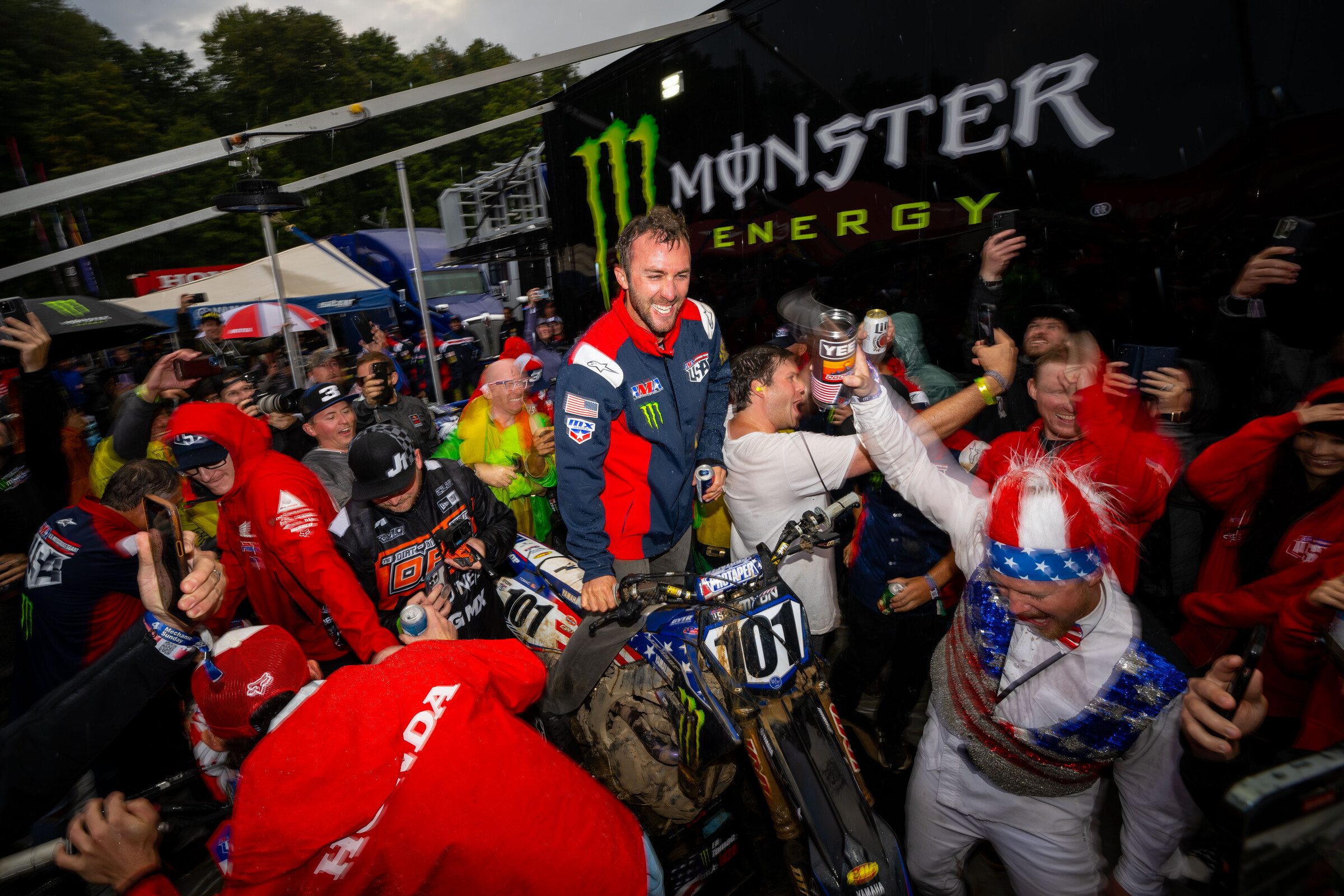 Monster Energy Yamaha Star Racing’s Eli Tomac had won everything there is to win on a dirt bike. From Monster Energy AMA Supercross and the Lucas Oil AMA Pro Motocross Championship titles on a 250 and 450 to Monster Energy Cup and MXGP victories, Tomac has found his way to the top step everywhere. There was one huge exception though to that stat that was still haunting Tomac and that was to claim a Motocross of Nations victory for Team USA.

Tomac had been to the Motocross of Nations three previous times riding in the MX2 class in Germany in 2013, the Open class in Latvia in 2014, and then in the MXGP class in the USA at RedBud in 2018. But each time he went, things went slightly wrong each time to keep him from helping USA back to that Chamberlain Trophy that they had not claimed since 2011.

That was until yesterday when Tomac won the first race at the Motocross of Nations at RedBud and coupled that with a sixth-place finish in his second moto to help USA win the Motocross of Nations for the first time in 11 years. In doing so, Tomac essentially completed the perfect season as he won his second Monster Energy AMA Supercross crown in May and his fourth 450 class Lucas Oil Pro Motocross Championship earlier this month as well. Everything Tomac has done since joining Yamaha for this season has now resulted in a victory and finally it’s also a Motocross of Nations victory as well. After his crowning moment, we caught up with the Colorado native to ask him how it feels.

Racer X: Finally! This is the basic question of racing. Is it elation, is it a thrill, or is it a relief to finally have this one?
Eli Tomac: [Laughs] It’s a lot of things! But a massive relief and just rad. Rad for the USA you know. It’s been 11 years and we’ve been so close to many times and haven’t gotten it done. And then of course the rain shows up today. We got it done. We made it happen.

I saw your faces on that podium, it’s like nothing else. I’ve never seen you react quite like that.
It’s cool! And there’s no sea of people like that, period, off the podium. It was like quadruple what we normally get. It was epic.

Talk about the team unity compared to previous Team USA’s, I’ve heard much more organization. Did you feel that comradery and organization this year?
Yeah. We were good, we were solid. I mean, let’s say we were vibing! Vibes were high! All the way from Friday until now, I told the guys, the only think I really told them was just try to not let stuff wear you down. At the end of the day, we’re riding a dirt bike track. The event itself feels a lot different but at the end of the day, we’re still just riding our bikes on the same dirt bike track. A lot of things feel different here. The starting procedure, you have to race Saturday, there’s a lot of things that kind of throw you off.

So what we’ve learned here is you did take a bit of leadership role here yourself because you have more experience in this event and you were providing advice to your guys?
That was the one thing I told these guys is to try not to let all the other stuff wear you down today. That was my one word of advice and other than that it was just trying to come together as a team, period. Sitting down together, talking about the track, walking the track, that sort of stuff.

Last thing, with the rain obviously, we can get bad demons from 2018. When you pulled that holeshot in Moto 1, how much did that help the whole day get off on the right foot?
[Laughs] It was a big deal! I mean any time you get the holeshot in those conditions it’s a big deal. Got off to the right start and it was way better than my qualifying moto start, I was a little nervous about that since I was in the same gate. But yeah man, that was big to get that lead and get that win.