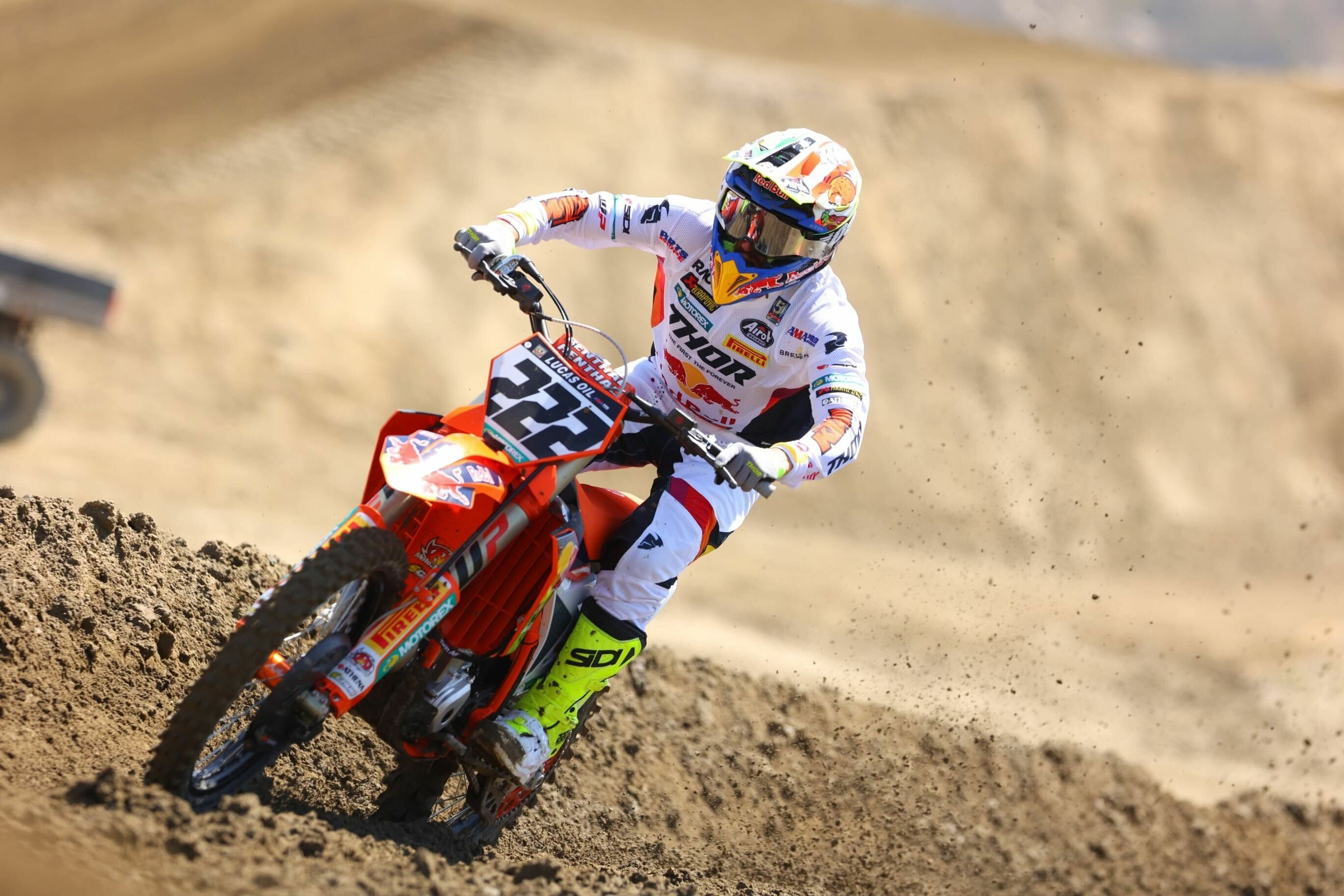 3 on 3 Big Questions for the Nationals

So many unknowns heading into the Lucas Oil AMA Pro Motocross Championship opener this weekend. Unlike a normal season where you just roll the bench-racing convos over from Monster Energy AMA Supercross, this motocross season has riders coming at it from all angles: some from retirement, some from Europe, some after time off, and some still firing after the stadium season.

This is nuts! We put up over two hours of preview videos, and we’ve culled some of the key debate points right here. Enjoy the convo with Jason Weigandt, Steve Matthes, and Jason Thomas.

Jason Weigandt: I should start this conversation with Dylan Ferrandis and Eli Tomac, but I don’t have as many questions there. They’re known commodities. They just won the last two titles that were up for grabs. The real wild cards are over at the Red Bull KTM truck. Shocking the world bringing back riders who were basically retired. Tony Cairoli racing in the U.S. And Ryan Dungey is coming out of retirement! This is shocking!

Steve Matthes: Yeah, it’s amazing. Ryan Dungey is coming back. We saw him practicing a little while ago, and I sent a text out and everyone said, “Yeah he’s just testing.” That makes sense because there’s no way Ryan Dungey is racing again, right? Well, he’s racing! He was on our Pulp[MX] Show a few Mondays ago. This is what we’ve been talking about since this news hit. He’s not coming back to run five-to-ten. He would just stay at home in Minnesota with his smoking hot wife and his kids. He said on the Pulp Show that’s he coming back because he thinks he can challenge for wins, that’s why he’s coming back. To hear him say it, after five-plus years gone, it’s pretty shocking! However he does, it’s awesome that he’s coming back. Call me skeptical on this working out to the level Dunge just told us he hopes to be at. It’s awesome that he’s there but call me skeptical that he can come back and win races and win a title.

Weigandt: Yeah, it was 2016 since Dungey last raced motocross. He did race supercross and win the title in 2017. JT, this would be like you coming back in 2019…and yes let’s just be honest here, Dungey was at a higher level than you. But that’s still a long time off.

Jason Thomas: Yeah, and there was a different age range there, I stopped racing at 33 and he was 27. I also tried racing a race just two years after I stopped. The biggest challenge for me was finding that intensity. Not only does he have to get back to where we was, and that will be difficult, now he’s got to get to the level where everyone else has risen. Let’s assume Eli Tomac is healthy, he’s rejuvenated and maybe the best we’ve ever seen him. You’ve got this new upstart, for Dungey, in Dylan Ferrandis who is the defending champion. You have Jason Anderson riding better than ever, all these things to think about, not to mention Dungey’s own hiatus from the series. I’m kind of in the camp with Steve, I think going out and winning races is going to be very, very difficult, and more difficult than maybe he realizes in the moment. That doesn’t mean he can’t run around top five, top ten all summer long without a problem, and be in the podium conversation when things go well. I just think asking for him to be title relevant is asking a lot.

Weigandt: That’s the thing. Every time we hear about one of these Dungey comebacks, we hear he wants to win. To get a bunch of top fives and two podiums this summer would be amazing, but wanting to win a lot, that’s the whole question. Also, Antonio Cairoli is here. He says he’s racing the first two. Maybe more. JT what do you think? He is older than Dungey, at 36.

Thomas: Yeah, but his time away is so much shorter. He was a race winner and podium guy just last season, and that series didn’t wrap up until last November. So, he has had almost normal off-season timing. Surely, he took some time off and got to regroup, but then he got back on a bike, and I don’t think there will be much drop off. I’m actually higher on Cairoli’s chances than Dungey’s, just because his time off has been so much shorter. He’s current on bike setup, on having a fitness base. He doesn’t have to go find the pace because he was already on the pace. Yes, learning the tracks will be a challenge and we don’t know how he will assimilate into the U.S. series, but I think he can surprise people, especially early, when most of these riders are still trying to find their outdoor legs. He’s going to come in hot because he didn’t race supercross for the last nine months.

Weigandt: Steve, where are you on Cairoli?

Matthes: Well certainly the tracks are different and there’s that factor. But I’m excited, man. The amount of texts I’ve gotten from industry people wanting to make bets on Cairoli and Dunge, that shows you how exciting this is, and how fun it will be to watch. Also, you have Aaron Plessinger over there who probably hasn’t even heard of either guy is just going to laugh at everything! It will be really interesting to watch Cairoli and Dungey go at it. My money is on Cairoli. I think it would have to go very badly for him to only do two rounds. He’s a class act and a great human being. We’re lucky to have him, even if it’s at the end. I’m really excited to go to the Red Bull KTM truck at the end of each race day and see how those guys are doing.

Weigandt: Okay, on to the Yamaha teammates. First, are we worried at all about the Ferrandis and Tomac relationship if they have to battle each other?

Matthes: No, I don’t think so, they’ll be fine. I think there’s a lot of respect there. I think back to RedBud last year when Ferrandis beat Tomac and he said, “I can’t believe it. It was incredible to beat a guy like Eli Tomac!” He really threw him a lot of respect, which is something you don’t always see from fierce competitors like that.

My question, though, is are we sure Eli Tomac’s knee is going to be okay? Is he going to be okay to race all 12 rounds this summer? I’m thinking not right now. I would bet on Eli not racing. He’s got this MCL injury right now and he says it hurts to grip the bike, and the only thing it will take to heal it is time. He’s had to take time off presumably, so no testing. He’s going to come into the season not at 100 percent, he’s got that supercross title in the bag. If he struggles in the first two or three rounds, I don’t see him keeping it going! I think this is a real interesting thing to watch, and a real bummer he hurt that knee in Atlanta. Look, I don’t have any insider knowledge on this, no one from Yamaha has told me this, but I don’t think he races all 12 rounds this summer.

Weigandt: Ferrandis is coming back from a wrist injury. JT do you have any concerns about that?

Thomas: For Ferrandis, no. I firmly believe he could have continued to race supercross if he had any kind of championship relevancy at all, or even getting podiums would have been a reason to continue on. Things were just kind of coming off the rails, and they were counting the days to the Lucas Oil Pro Motocross Championship. So those two things together were kind of converging. I remember him riding off of the track and thinking “That’s probably the last time we see him in supercross this year.” It was just a case of “Yeah my wrist is no good here.” He cased a jump and rode off the track. I think he’s fine now. I don’t think you’ll see lingering effects going into the first round.

Tomac, I’m less sure. I think he will race. Dealing with my own knee injuries, I saw too much speed and intensity from Tomac [even after the injury at Atlanta] to think that he can’t do it. Did he fall off, toward the end of the races? Yes. But you could also argue some of that was the championship pressure and him not wanting to take big risks. But you look at that Denver heat race, and he looked the best, on the same form we had seen him all season. I think taking that last round off was smart, letting it heal, letting the inflammation come down, and then get back down to it. As long as it’s not something where the doctors say it’s something they have to fix surgically, which it sounds like it’s not, I don’t think he will have a problem getting through the whole season.

I will follow up on Steve’s point a little bit. It only takes one dab of the knee, one mistake like what he did in Atlanta, and it’s all wiped away.

Weigandt: Ken Roczen said he’s back and even put out a big Instagram post saying he will get back to where he was. So where are we with Ken? Same old story?

Steve: I take umbrage with your statement, Weege, that Ryan Dungey is the real wild card here. The wild card is Ken Roczen.

Weigandt: Wilder than a guy that’s been retired for six years?!

Matthes: Yeah, because if I told you Ken Roczen was going to have races where he goes 1-1, you’d be like “yup.” Right?

Matthes: So, what if I told you he gets 8-10 and pulls out halfway through the year.

Weigandt: Well, I could see a world where Dungey does all 12 rounds and Roczen doesn’t.

Matthes: Thank you. That’s the definition of wild card, everybody. Ken Roczen, strap in and enjoy the ride. I think we’re going to see more of the same.

Weigandt: JT, what do you think of Ken Roczen’s prospects for the summer?

Thomas: Well, I think it’s fair for him to be a little upset on Instagram. If people are counting him out, just look back at how great he was last year, especially at the start of the series. Now, to Steve’s point, can he maintain that at rounds 8-9-10 when the title is really on the line? It’s usually hotter at those races, Kenny has run into physical issues that start ailing him.

Matthes: JT, if he goes 1-1 on Pala, would you be surprised?

Thomas: I shrug my shoulders. I would not be surprised. Doubting Kenny, especially in the first part of a series, do that at your own peril.