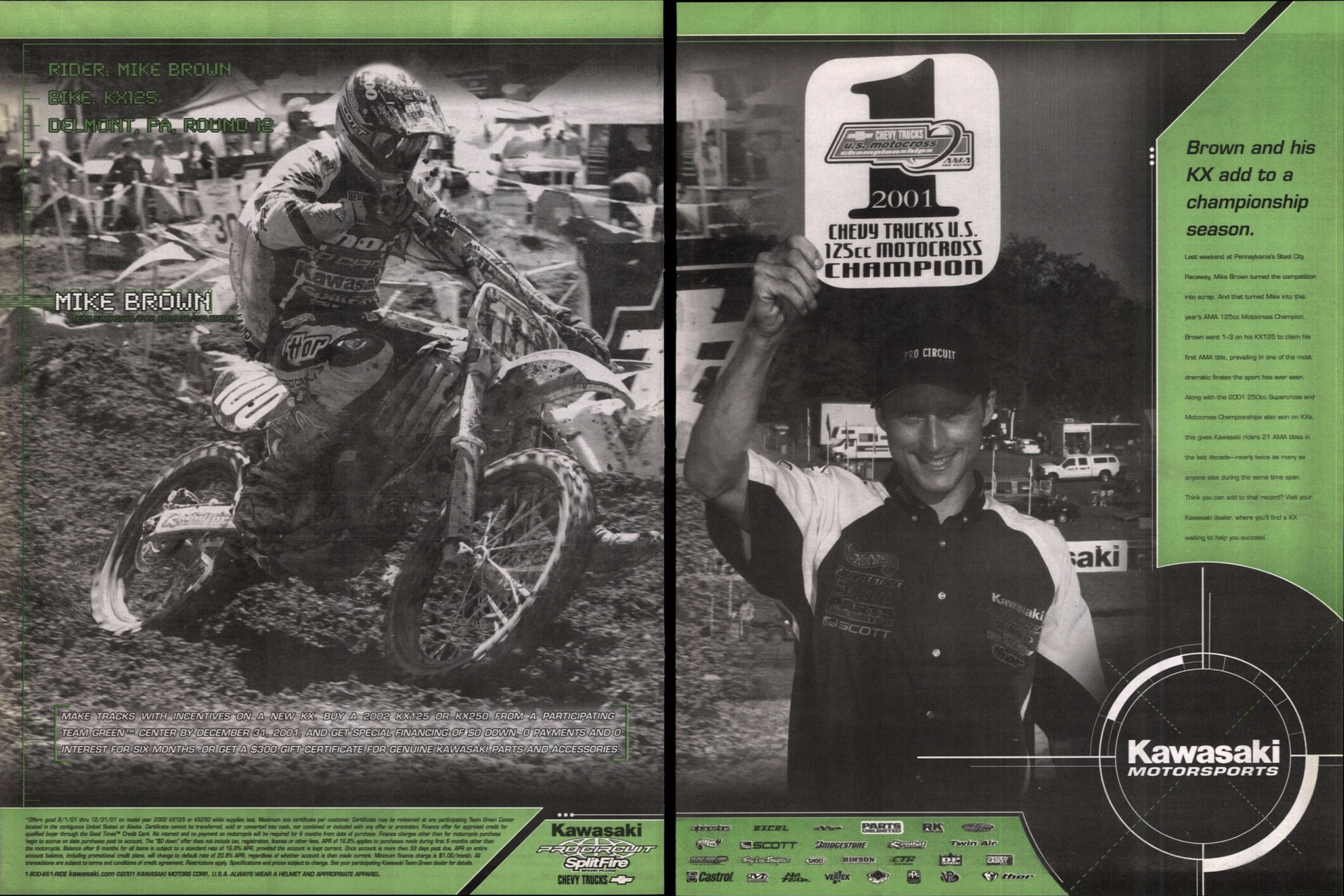 Welcome back to our 50-Day MAVTV+ Countdown to the opening round of Lucas Oil Pro Motocross, which will is celebrating its 50 years in existence this summer. After taking a short break over the weekend for the last round of the Monster Energy AMA Supercross Championship, which wrapped up in Salt Lake City on Saturday night, we’re grabbing another gear, getting back up to speed and catching up with all that happened in 2001.

The 2001 season was the first in which the AMA’s new permanent numbering system went into effect. That meant that defending 250 Pro Motocross Champion Ricky Carmichael was free to either use the #1 he earned in 2000—his first in the 250 class—or the #4 that he had chosen as his new permanent number. The future GOAT chose #4 for outdoors, which just happened to be the same number he wore in 2000. In supercross it was Jeremy McGrath who was #1, as he had won his seventh title in eight years in 2000 while riding a Chaparral Yamaha YZ250. If he were to line up outdoors, he would wear #2, but McGrath was pretty much supercross-only by this point of his career.

In the 125 class Travis Pastrana was the defending champion, and he chose to wear his #1 outdoors, but his new permanent number for SX/MX would be his trademark number #199.

The supercross series started with an excellent duel between McGrath and Carmichael that would last through the first month of the season. McGrath won both the Anaheim opener and Anaheim 2 a couple weeks later while the Kawasaki-mounted Carmichael would win San Diego and Phoenix (rounds 2 and 4). It was at the third and final Anaheim of 2001 that everything changed. Carmichael overcame a poor start to catch the leader McGrath, pass him and pull away. Carmichael would go on to win the last 13 rounds of the series in a row; McGrath would never win again. The torch had been passed and the era of Jeremy McGrath as reigning champion was over, though he remains the all-time King of Supercross with his out-of-reach records of seven AMA Supercross title and 72 main event wins. He also remains a household name even twenty years after he quite racing full time.

A couple of other milestones happened in the 2001 season, including the first AMA Supercross race ever won by a KTM (Grant Langston in the 125 class at Dallas) as well as the first AMA 125cc championship won by a 250F four-stroke (Yamaha of Troy’s Ernesto Fonseca in the 125 West Region). And Travis Pastrana would earn his one and only SX title in the 125 East Region aboard a Suzuki RM125.

Pastrana appeared to be a lock for a successful repeat as 125 Pro Motocross Champion, especially after he opened a 44-point lead over Red Bull KTM’s Grant Langston, who had moved to America after winning the 2000 FIM 125cc World Championship. Langston had started hot, winning the first four motos at Glen Helen and Hangtown. But then Langston dislocated his shoulder in a crash at Southwick and would end up missing Budds Creek. Pastrana kept plugging along and building points, despite a few big crashes for himself. After RedBud, which was won by Moto-XXX privateer Larry Ward, the first AMA 125 National won by a four-stroke 250cc motorcycle, Pastrana had a clear path to the title. Or so it seemed.

All hell broke loose on the last lap at Unadilla when Pastrana, holding a huge lead over Langston on the last lap of the second moto, crashed on his head as he was doubling up a hill, causing a DNF. Travis made it worse two weeks later when he crashed hard at Washougal, a race won by the suddenly rising veteran Mike Brown, who had finished third in the 125 World Championships the previous year behind Langston and British rider James Dobb. Brown had been picked up by Pro Circuit Kawasaki to race in the U.S. in ’01 and had already won at Budds Creek and Kenworthy’s.

Pastrana’s situation got even worse. After wrapping up the Philadelphia X Games gold medal in freestyle motocross, he did an extra and unnecessary trick that made the concussion even worse. He then flew on a private plane to the next day’s Spring Creek National in Minnesota, only to pull out of the race while running third, effectively ending his season on the spot. Incredibly, Pastrana, just 17 years old, would never win another motocross race or supercross main event.

The title came down to the last round at Steel City in Pennsylvania between Langston and Brown, with a wild card thrown into the deck: Ricky Carmichael, who had by this point clinched the 250 National Championship, decided to drop down to a 125cc motorcycle for the last round in order to try to break a tie he was in with Mark Barnett for the all-time 125 National wins record at 25 apiece. Langston fans howled that Carmichael was dropping down to help Brown in the title chase, who was nine points behind Langston after GL swept both motos at Broome-Tioga in New York.

In the first moto, Brown topped Langston for the win after Carmichael went down on the start. Ricky raced back up to third, but it was too late to catch the leaders. That meant that Langston had a six-point lead going into the final moto and only needed to finish third if Brown were to win. This time Carmichael got a better start and simply disappeared from the whole pack while Langston safely rode in third. Brown, meanwhile, went down early in the race and was way back, meaning Langston’s title was secure. With what would have been KTM’s first-ever AMA Pro Motocross title in reach, Langston’s rear wheel suddenly began to wobble. He had landed hard off of one of the big tabletops and spokes were starting to crumble. Meanwhile, Brown had launched an epic comeback after his early crash, and he caught Langston just as the South African’s wheel was about to give way. Brown sailed through, and then the wheel finally gave way completely, leaving Langston shattered and upset on the infield. Langston and KTM were going to lose the title.

Brown saw what was happening and immediately slowed down, having done the math in his head that if he got third in this moto, Carmichael’s 3-1 would beat his 1-3 and give Ricky his all-time 125-win record, and Brownie would still win the title. So, he slowed and let Factory Connection Honda rider Branden Jesseman go past, then celebrated after the race with the whole Pro Circuit Kawasaki team. It was one of the wildest seasons ever, with Brown down on the track and in points early in the second moto, only to emerge with the title.

For a deep dive, read Jason Weigandt and Steve Matthes’ long form story with Pastrana, Langston, Brown and all the key players in that wild 125 season.

More recently, Weege and Matthes did an excellent Leatt Re-Raceables podcast on the 2001 Steel City 125 National with extensive interviews with both Langston and Brown that you can listen to right here:

Brown, Kawasaki, and Pro Circuit had pulled off the impossible, but there wasn’t much celebrating going on over at Carmichael’s Chevy Trucks/Kawasaki factory rig. In fact, Carmichael was packing his gear up. He had decided way back in the spring that he was going to leave Kawasaki for a new deal with Team Honda. It was shocking news to the industry, especially after he won 14 of 16 AMA Supercross rounds and the title, plus his second straight 250 Pro Motocross title. Carmichael had been a Kawasaki rider since he was on KX60s. His next race—the 2001 FIM Motocross of Nations in three weeks—he would be on a red bike, leading Team USA’s Brown and Kevin Windham, the Suzuki rider who had won at both Washougal and Steel City.

But that race never happened, at least not for Team USA. Nine days later, on September 11, 2001, the terrorist’s attacks on the World Trade Centers, the Pentagon in Washington, DC, and the crash of a jetliner in Shanksville, PA shook up the whole world, and Team USA decided collectively to stay home.

Carmichael’s Honda debut would come at the U.S. Open of Supercross at Las Vegas instead, and while he would win, he would cause a ruckus by wearing a cape and a king’s crown for the opening ceremonies, as requested by the promoter, not realizing that this would be perceived by the fans as an insult to Jeremy McGrath, still the King of Supercross. It was one of the few mistakes that Ricky Carmichael would make on his way to becoming the greatest of all time.