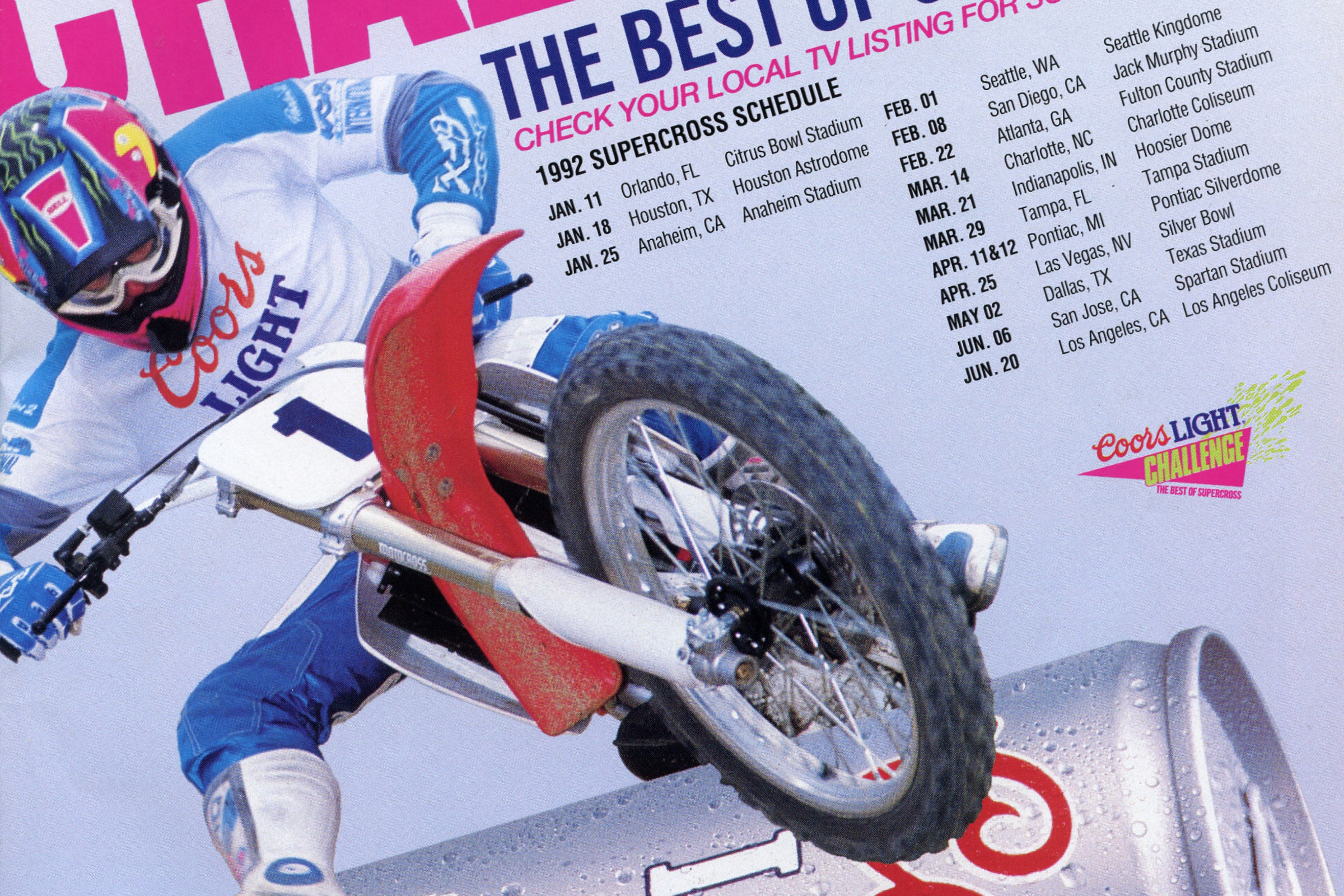 Welcome back to the MAVTV+ 50-Day Countdown to the opening round of the 2022 Lucas Oil AMA Pro Motocross Championship, which got a huge boost today when we found out that Ryan Dungey is coming back! In this countdown we are working through each of the 50 years of AMA Pro Motocross, and today we are 1992, a very strange season for sure.

After emerging from the 1991 season with all three AMA titles (SX, 250 MX, 500 MX) Jean-Michel Bayle made it clear to American Honda that he wanted to go back to Europe and begin a new career in road racing. Honda held firm and exercised his contract to stay one more year on the AMA circuit, which JMB did so begrudgingly. His heart just wasn’t in it. He was still remarkably fast, but only when he wanted to be, like in the St. Petersburg, Florida Supercross race, where later in the race, in just two-and-a-half straightaways, he goes from fourth to first, passing Jeff Stanton, Damon Bradshaw, and Guy Cooper. Check it out at about the 13-minute mark:

Still, Bayle would finish on the SX podium 12 times out of the 16 rounds and win two races (St. Pete and Las Vegas). He was just 11 points behind the leader when the series ended. Bayle also went ahead and rode and won the 500cc U.S. Grand Prix at Glen Helen, racing as a favor to Roger De Coster, the co-promoter of the event as well as the man who brought him to America in the first place.

The real supercross battle in ’92 was between Bayle’s Honda teammate and Yamaha’s Bradshaw. For most of the series the 19-year-old Bradshaw had the upper hand, winning nine rounds, the record to that point for most wins in a season. But he didn’t the one he needed, which was the final round at the Los Angeles Coliseum. That race was delayed for several weeks due to the riots in Los Angeles that followed the acquittal of three police officers accused of beating a black man named Rodney King. During that period the outdoor nationals went on, one week before the LA SX was finally set to take place on July 11, Bradshaw crashed hard at RedBud. Still, he went into the last SX round with a six-point lead and simply needed to finish third if Stanton won.

Unfortunately for Bradshaw and Yamaha, the press got to him. Damon rode his worst race of the season and had trouble moving forward from the start, despite the fact that his teammate Jeff Emig was purposely staying behind him, as was Bayle. In the end, with Bradshaw stuck in fourth, well behind the top three of Stanton, Mike Kiedrowski, and Guy Cooper, JMB went ahead and passed him as well. Stanton crossed the finish line as the 1992 AMA/Camel Supercross Champion.

The final SX began a remarkable three-week run for Stanton. After winning the LASX and the title, he then went to Unadilla and won the 250cc USGP for the third year in a row, then one week he clinched the ’92 AMA 250 Pro Motocross Championship, his third in four years, just as he had done in SX. That’s quite a run!

But then just as he did in ’89 and ’90, Stanton could not bag the final leg of the triple crown, the AMA 500 Nationals. Instead, it was Kawasaki’s Kiedrowski who garnered the title by just three points over Stanton. JMB’s last race was also the last for Jeff Ward, who had won the 500 National at Steel City the previous weekend. At Budds Creek, Ward ended up third and Bayle fourth.

In the 125 classes, the same two riders that won the 125 East and 125 West—Brian Swink and Jeremy McGrath—won their respective titles again, only in ’92 there were no longer teammates, as Swink moved over to Team Suzuki. McGrath would also get to do a few rounds on the 250, testing the riders for a move up in 1993. His best finish was a fifth at Tampa. No one at that point had any idea of just how good he was going to turn out to be, nor how quickly it was going to happen!

Finally, the 125 Nationals. Kawasaki’s Mike LaRocco got the drop on everyone by winning the opening round at Gatorback Cycle Park in Florida. He would stay towards the top of the leaderboard for the first ten races, and then had a lead of 47 points over Yamaha’s Jeff Emig, who won a 125 National for the first time at RedBud in July. LaRocco and Emig also teamed up with U.S. Grand Prix racer Billy Liles to win the ’92 FIM Motocross of Nations in Australia on a so-called “B team” after all of the other top Americans—Stanton, Bradshaw, Kiedrowski, and more—all decided against going because there were still two nationals left to be held after the MXoN.

The last four motos would prove absolutely disastrous for LaRocco. He suffered two DNFs at Steel City, which threw the series into a dead heat with overall winner Emig. And then right after the start of the last race of the season at Budds Creek, LaRocco busted his shifter on a big tractor tire that was marking the track. Just like that the long-gone Jeff Emig was the ’92 AMA 125 National Champion!

Here’s a handy season-in-review with many of the ’92 outdoor nationals.