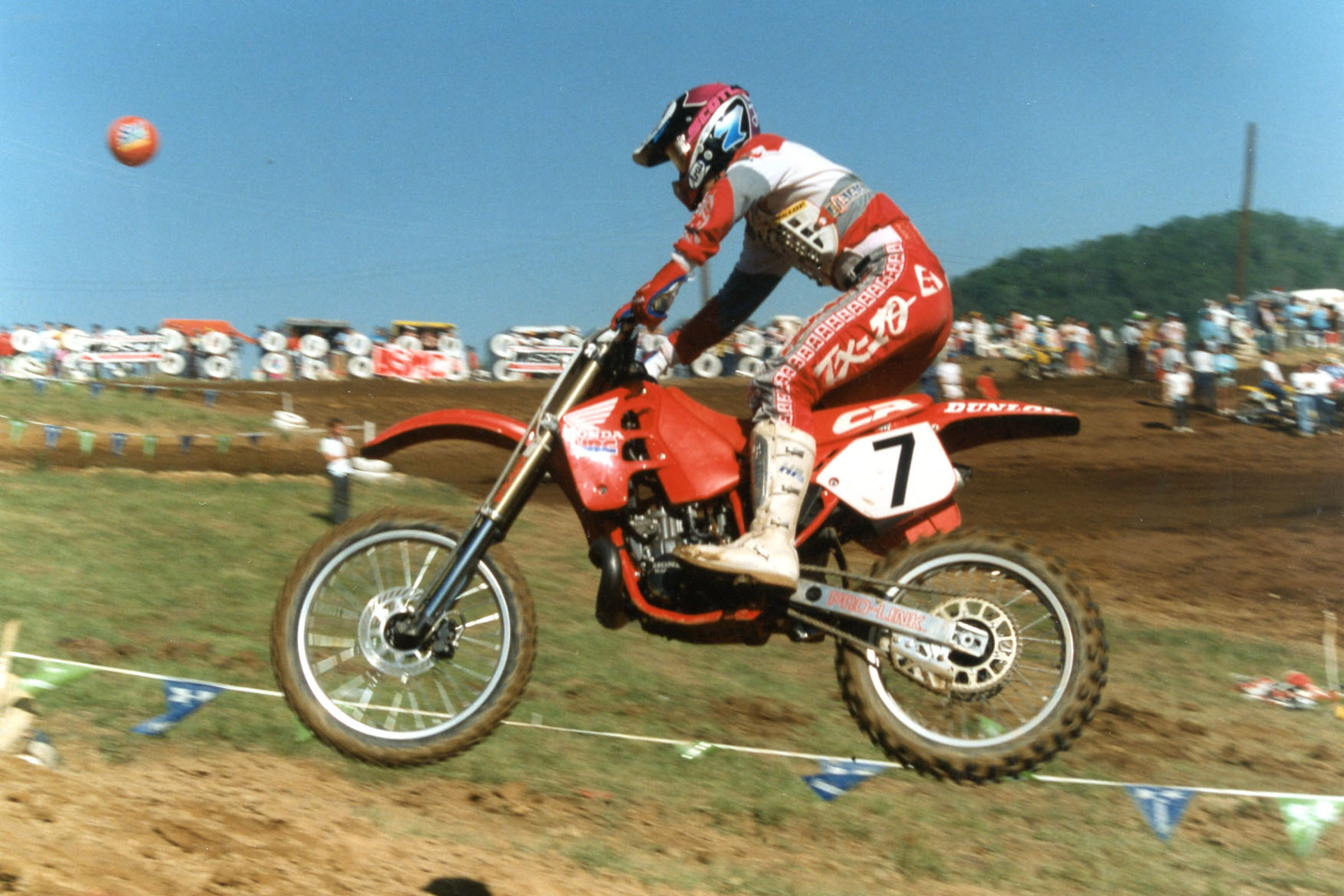 Welcome to 1989 as we continue to count down the 50-year history of AMA Pro Motocross one day at a time in our MAVTV+ 50-Day Countdown to the Fox Raceway opener of the ’22 Lucas Oil AMA Pro Motocross Championship. Today we’ve reached a very pivotal year in the history of the sport, not only in this country but worldwide. Nineteen eighty-nine would not only see one of America’s all-time greats in Bob “Hurricane” Hannah retire, it would also see the sudden and unfortunate end to Rick Johnson’s reign of the late-eighties, the rise of Jeff Stanton, Mike Kiedrowski, and Damon Bradshaw, plus a cameo appearance from the gamechanger himself, Jean-Michel Bayle (though he actually wore “Star-Buster” on the back on his JT Racing pants).

Everything started out well-enough with Team Honda’s Rick Johnson, the reigning AMA Supercross Champion, dominating the first five rounds, serving notice to all that he was at the peak of his game. He was mostly chased by his younger new teammate Stanton, who had left Yamaha after several years to be RJ’s understudy. The Honda squad also had a visitor in the Frenchman Jean-Michel Bayle, who was planning on moving to America to race full-time, but not until 1990. At this point he was the FIM 125cc World Champion, and he would easily add the ’89 250cc World Championship. But it’s what he did in America before and after the ’89 Grand Prix tour that began reshaping the motocross world as we know it.

There was also the arrival of North Carolina’s Bradshaw on the scene. A minicycle and amateur motocross prodigy, Yamaha believed in the kid enough to let Stanton go to Honda, and he almost immediately responded by finishing an astonishing third in his AMA Supercross debut—in the 250 class! Bradshaw was just 16 at the time when he lined up at San Diego in the premier class, as he would be riding the 125 East Region. Only Johnson and Stanton were able to beat him. When 125 East started, he was already on fire. The Beast from the East’s first four career professional SX results were third in a 250 SX and three straight wins in the 125 class.

Back to Johnson. He rolled through the first five races on the trot: Anaheim, Seattle 1 and 2, San Diego, and Miami. He finally tripped himself up in Atlanta with a crash that allowed Stanton to get his first career win. Johnson then went to the ’89 AMA Pro Motocross opener at Gatorback Cycle Park as the heavy favorite. But it was there that his Achilles heel was exposed: Privateer Honda rider Danny Storbeck collided with Johnson in practice, snapping Johnson’s wrist and basically beginning the downside of his career. Johnson would never be the same after that practice crash at Gatorback.

That wasn't the only significant thing that happened that day. The aforementioned Bayle, who struggled in his AMA Supercross debut but showed marked improvement—21st, 5th, 6th, 9th, 2nd—blew the Americans’ collective minds with a shocking win over Stanton and incumbent hero and reigning 250 National Champion Jeff Ward. It was certainly enough for Honda to seal a deal with JMB, who would then go back to Europe, win the FIM 250cc World Championship (despite missing the first round with a fractured arm), and then return to finish 2-2-3-1 in the last four 500 Nationals!

On a side note, while JMB was dominating the 250 Grand Prix tour, three Americans were vying for the FIM 125cc World Championship in 1989: Californians Bobby Moore and Mike Healey, and Louisiana’s Trampas Parker. Each rode for a different KTM team, and they ended up finishing first (Parker), third (Healey) and fourth (Moore). It was every bit the upset to European motocross as what Bayle did here to the Americans.

Now back to AMA Supercross first. With Johnson out with his wrist injury, Stanton stepped right up, winning the very next round at Daytona—but he did get something of a gift. When we did our Daytona Supercross preview a few weeks back I failed to mention the one-that-got-away for Ron Lechien. It happened in 1989 at Daytona after the Kawasaki factory rider appeared to have the main event in hand, only to have the “exhaust valve governor gear in his Kawasaki sheer all of its teeth,” according to Cycle News. The Dogger slowed dramatically, and Stanton ended up overtaking him.

Stanton would end up winning several more of the remaining rounds to clinch his first of three AMA Supercross crowns. He would end up beating Lechien by more than two races for the title.

Stanton also stepped up to fill the big shoes of Johnson in 250 Pro Motocross. He topped Kawasaki’s Ward and Lechien for his first of three titles there as well. The only title of the three he was competing for in ’89 that Stanton did not win was the AMA 500cc National Championship. He was in it until the end, but Jeff Ward put on another masterful performance to win the sixth major title of his career. (It should be mentioned that Johnson came back in the summer and actually won both the 250cc USGP races at Unadilla, only to re-injure the wrist.)

That left the 125 National for ’89. Many assumed that Bradshaw would blitz through, but a series of missteps by the Yamaha rider, along with an impressive summer by relatively unknown Honda support rider Mike Kiedrowski—he was #762—meant that Honda would again keep its 125 AMA Pro Motocross title streak going at five in a row.

When the season was all done Team USA decided to send Ward (500), Stanton (250) and Kiedrowski (125) to the FIM Motocross of Nations in Germany. They ended up winning again, marking the ninth year in a row that the Americans won. But their global dominance in all things SX/MX was about to take a hit.

(And on a personal note, I just realized in working through the Cycle News Archives that I got my first cover shot in 1989 from the High Point National, a first turn shot that I made at dozens of local races before they let me shoot the actual national!)