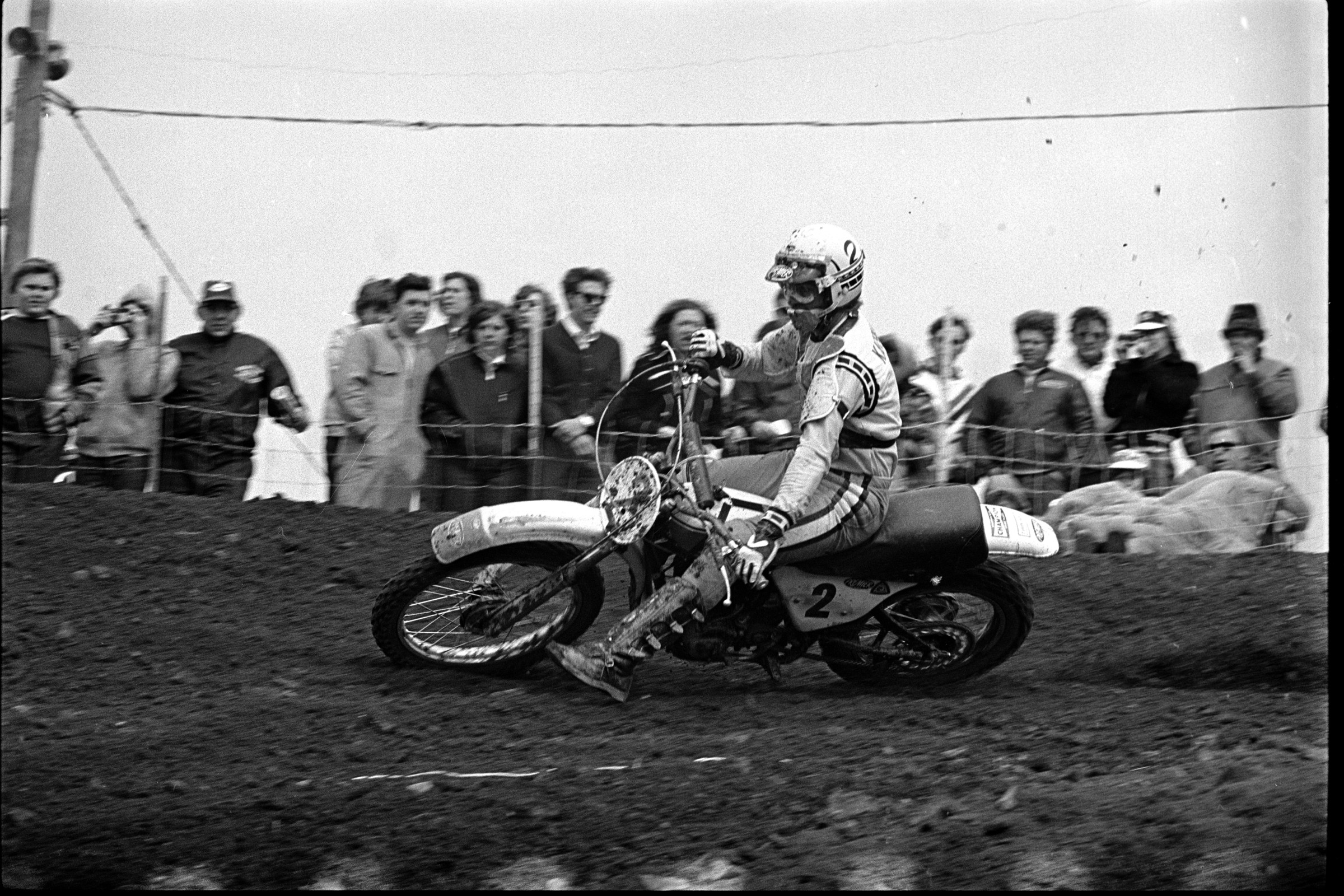 We’re down to Day 48 in our MAVTV+ 50-Day Countdown to the start of the 2022 Lucas Oil AMA Pro Motocross Championship, which is celebrating its 50 years of motocross history. By 1974, we were to the point of stand-alone AMA Nationals that no longer included results from the pre-existing 500cc Trans-AMA Series and the 250cc Inter-Am Series—at least not in the 250 and 500 classes. However, 1974 was a big year of change, with the addition of a new national class for 125cc riders, as well as the start of the very short Yamaha/AMA Super Series of Stadium Motocross, which is what we now know as Monster Energy AMA Supercross.

Read about the first two years of AMA Motocross in the U.S.:

Let’s start with supercross. As mentioned yesterday there were five races in 1973 that would have qualified for what we now think of as supercross: The Daytona, Poconos, and Talladega races at NASCAR facilities, the Inter-Am race at the Los Angeles Coliseum, and the Trans-AMA race at the old John F. Kennedy Stadium in Philadelphia. The AMA felt it was time to start a series just for those type races, and Daytona joined the new series immediately, though Superbowl of Motocross founder Mike Goodwin, the “godfather of supercross,” decided not to be part of this new series. At least not yet. In fact, the only new promoter that would join Daytona’s France family in joining this series was Allen Becker’s Houston-based PACE Motorsports, which held the rights to races in the Houston Astrodome and had been running flat track and TT races there since it opened. Here’s what those races looked like:

So, the Super Series kicked off at Daytona with a pair of three-moto classes for 250 and 500, and the winners were Pierre Karsmakers in the 250 class and visiting Belgian superstar Roger De Coster in the 500 class. One week later everyone went to the Houston Astrodome for a Friday/Saturday doubleheader. Well, almost everyone. Team Honda decided to sit the new series out. Also, Roger De Coster flew to Houston but could only race the first night due to a commitment to a race back home in Belgium on Sunday. After he DNF’d due to an engine failure he was helicoptered to the airport and was home by Saturday afternoon. The Houston winners? Karsmakers again in the 250 class and Husqvarna’s Gary Semics in the 500 class (which had equal value at that point, though by 1977 the 500 class would be phased out completely in AMA Supercross).

The other big development was the addition of a 125 class to the AMA Nationals. With a huge boost in sales the previous year, the AMA decided it was time to run a 125 class, but not completely. Rather, there was a single 125/250/500 National, and then the rest of the 125 Nationals ran as the second class in the fading Inter-Am Series, which was down to just four races. But only three would include a 125 National class. The biggest race of all that year, the Superbowl of Motocross at the Los Angeles Coliseum, would only run the 125 class as a California High School Motocross event. The winner? The same guy who would win the 125 National Championship, 17-year-old Marty Smith from Point Loma High School in San Diego.

The 1974 outdoor opener was another historic event, as not only was it the first 125 National, but because it was the first national for the Dirt Diggers North Motorcycle Club. They had been running their Hangtown event since the mid-sixties, but it joined the AMA Pro Motocross series for the first time in ’74. It has remained part of the schedule ever since—with the exception of 2020 due to COVID-19. The winners of that first Hangtown National were Honda teammates Marty Smith (125) and Billy Grossi (250) and Yamaha’s new hire Mike Hartwig (500).

All told, the rookie Smith would win two of the four 125 Nationals and the title. The other wins went to Yamaha’s Tim Hart (Mid-Ohio) and Can-Am’s Jimmy Ellis (Baldwin, Kansas). Marty Smith would go on to an AMA Hall of Fame Motorcycle career. Tragically, he passed away in April 2020 along with his wife Nancy in a dune buggy accident in the California desert. The Rookie of the Year Award in the Lucas Oil AMA Pro Motocross Championship is now called the Marty Smith Rookie of the Year Award.

The 1974 series also saw one of the more confusing, controversial and unfortunate moments in series history. The AMA had decided to not count any foreign-born riders in the standings, somehow thinking that would make the series more legitimate and prestigious, by kicking out one of the very best riders in the world—Dutch-born Pierre Karsmakers, who happened to be the ’73 AMA 500cc National Champion. Karsmakers was allowed to race, and he counted in the results, just not the AMA points. All of this despite being counted in the first AMA Supercross Championship, which he won previously the same year! Karsmakers won three of the first four races in the 250 class, but he was not recognized in the points.

In the end it would once again be Gary Jones who won the 250 National Championship, on his third different brand in three years, having gone from Honda to Can-Am. He would also win third straight title without winning a single round. Finishing second and third in the final standings were Jimmy Ellis (who won a round of both the 125 and 250 Nationals) and Marty Tripes (who only joined Can-Am for the very last round so that the brand could boast that it went 1-2-3 in the final standings).

The 500 class title would end up being won by Kawasaki’s Jimmy Weinert, who out-muscled CZ rider Tony DiStefano for the title. Weinert and DiStefano would be immortalized in a photograph by Charlie Morey from the Hillsboro, Ohio, round at Highland Hills MX that would end up on the cover of Cycle News, as well as years later on the cover of Racer X Magazine.

Some other notable moments of 1974 were the fact that this was the first year that RedBud was on the schedule, with Gene Ritchie as the promoter of what was to become one of the most famous motocross tracks in the world. The race was won by the late Kenny Zahrt in the 250 class (on a Bultaco!) and Michigan’s own Mike Hartwig on the 500 class.

And then one week later, Dave and Rita Coombs hosted their first national at Appalachia Lake MX Park in Bruceton Mills, West Virginia, won by Karsmakers (250) and Tony DiStefano (500). Both the Ritchie family and the Coombs family, as well as the Dirt Diggers from Hangtown, remain a part of Lucas Oil Pro Motocross.

Here’s some cool home movies of that ’74 Appalachia Lake National that someone shot and posted on YouTube.

At the end of the 1974 season the mighty Trans-AMA Series would once again dominate the headlines, as American riders were really challenging the European masters like Roger De Coster, Heikki Mikkola, Adolf Weil, Harry Everts, and more. No American riders won races in the ‘74 series, unless you count the winner of the last race at Saddleback Park, transplanted Pierre Karsmakers, who really got the last laugh in 1974!

Here’s some bonus 1974 footage, only from the Inter-Am Series at Mid-Ohio, shot by Yamaha factory rider Mike Hartwig’s father. Hartwig is #79 on the white Yamaha.