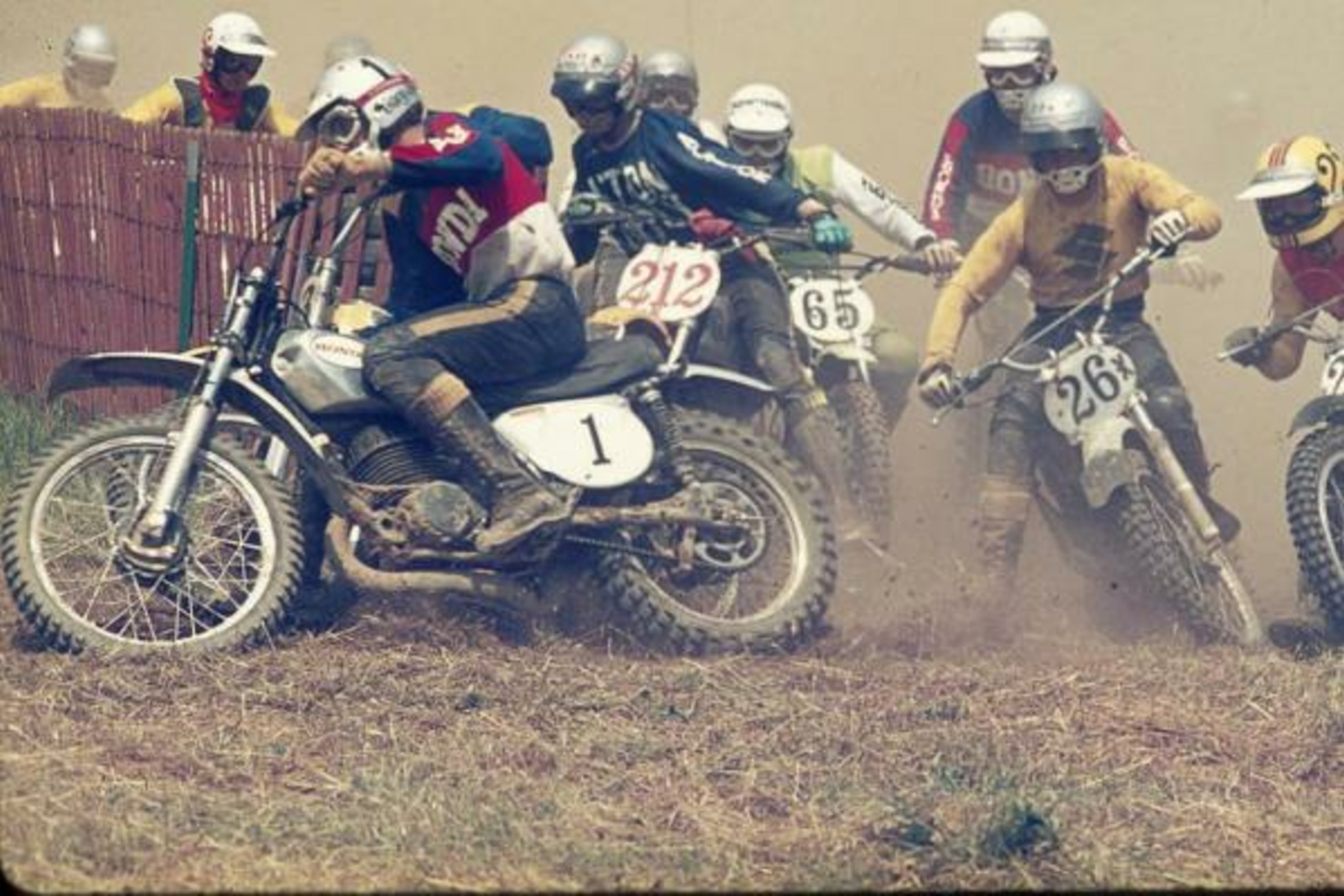 Welcome to Day 49 in our MAVTV+ 50-Day Countdown to the start of the 2022 Lucas Oil AMA Pro Motocross Championship, where American motocross is celebrating 50 years. Yesterday we kicked off our countdown by explaining the situation leading up to 1972, the first year for the AMA Pro Motocross Series. The first two champions were Yamaha rider Gary Jones in the 250 class and Kawasaki rider (and part-time CZ rider) “Bad” Brad Lackey in the 500 class. Jones and Lackey won their championships based on the stand-alone AMA Nationals, but also the inclusion of the results of the other existing series, the 250cc Inter-Am races and the 500cc Trans-AMA races, but without counting the Europeans who were also participating… Yes, very confusing. We explained it all in more detail in yesterday’s introduction, which you can dive into if you missed.

Nineteen-seventy-three would see some the same fairly confusing format, though Edison Dye’s Inter-Am Series was beginning to fade a bit. For ’73 the series that really started it all in 1967 was down to just five races, though they did decide to include Mike Goodwin’s Superbowl of Motocross for the ’73 Inter-Am tour, which meant it would also be part of the ’73 AMA National Motocross Championship.

As far as the 500cc Trans-AMA Series goes, it was still 11-rounds strong, which meant that the ’73 AMA National Championships for 500s would include the 12 outdoor nationals for 250/500 classes, plus the 11 Trans-AMA rounds. The 250 class would be 12 outdoor nationals plus five Inter-Am rounds. This would finally get sorted out for 1974, but the AMA still felt that their domestic series still needed the tie-in to the two international tours that predated it.

There were several other big developments. Daytona’s motocross race, which began in 1971 in the infield of Daytona International Speedway, would join the 1973 AMA Pro Motocross tour, as “supercross” still wasn’t really a thing.

Here’s some vintage home-movie footage from the ’73 Daytona Motocross shot by Wally Wallenberg:

A round would also be held on the infields of Pocono International Speedway in New York, and again at Alabama International Raceway in Talladega. Finally, there would be a night-time Trans-AMA promoter by Mike Goodwin inside John F. Kennedy Stadium in Philadelphia. That means that of the 1973 AMA schedule, five rounds—Daytona, the LA Coliseum, Pocono, Talladega and JFK Stadium—would be considered “AMA Supercross” rounds if they ran today (and that’s exactly what Daytona is!)

Okay, now let’s get to the racing. There was a huge change in the 500 class involving the defending champion. After dominating the ’72 series Brad Lackey wanted to go to Europe in 1973 to race the FIM 500cc Motocross World Championships instead, as that was the absolute zenith of motocross at that point in time. Lackey was Kawasaki’s top American rider (and also the top American, period). Now he would be Kawasaki’s first entry on the 500cc Grand Prix tour. But he wasn’t leaving the U.S. scene completely. Brad would travel back to America when he could during the summer and ended up winning two nationals (Lake Whitney in Texas and Motocross West in Louisiana). He would also compete in the full Trans-AMA Series, which allowed him to finish fifth overall in the ’73 AMA 500 Nationals. He struggled more so on the GP tour, finishing 13th overall.

While Lackey was splitting his time and focus, Pierre Karsmakers was firmly committed to his move to America. A journeyman from the Netherlands, Yamaha had decided to hire Karsmakers as something of a ringer, bringing him over to the states to help develop their program here. Karsmakers won the first race he entered—the Daytona MX opener—over Suzuki’s Mike Runyard, Lackey, and Husqvarna’s Mike Hartwig. Karsmakers would go on to win four of the first five rounds and was never really challenged, at least not until after Lackey was on a plane to Europe after winning the second round.

In the 250 class there was a different kind of shake up. Yamaha already had the #1 plate there with Gary Jones, but then during the off-season a new entity entered the arena: Team Honda. In their first official motocross program they hired Gary Jones and his brother Dewayne, as well as still-16-year-old Marty Tripes, to race their new lightweight motocross model, the CR250M Elsinore. With their father Don Jones as team manager, the Jones brothers set out to put Honda on the motocross map in America, and after a rough start—Dewayne finished sixth at Daytona but Gary failed to qualify when the clutch broke and the bike jumped the starting gate, and then his bike seized at the second round in Louisiana—it started coming together quickly. Gary Jones would give Honda its first major motocross win at round three, held at Amelia Earhart Park in Hialeah, Florida, with Tripes finishing second.

When the Inter-Am Series started up, the Americans were suddenly joined by some of the top 250cc riders in the world, on break from the 250 Grand Prix tour. That included America’s own Jim Pomeroy, who like Lackey had his career path fixed on racing in Europe. He would win the first 250cc Grand Prix he ever entered, the season-opening Spanish GP, aboard a Bultaco, also America’s first-ever GP win. Also arriving in the states for a racing holiday were Finland’s Heikki Mikkola and Czech CZ heroes Jaroslav Falta and Antonin Barbarovsky. They would dominate the five Inter-Am rounds, except for two: The Utah opener, which was won by Karsmakers, and the Superbowl of Motocross at the Los Angeles Coliseum on July 6. For the second year in a row, Marty Tripes (by this point in summer 17 years old), came out the winner, making him arguably the first “stadium motocross” specialist in history.

Mikkola would end up winning the Inter-Am Series on his Husqvarna and then head back to Europe with the Czech riders in tow. They would be replaced by the 500cc stars from Europe who would compete in the fall Trans-AMA Series: Roger De Coster, Adolf Weil, Sylvain Geboers, Hans Maisch, Gerrit Wolsink, Arne Kring, and more. They would dominate the series, with the exception of a single race, which would rattle the global motocross establishment. Kawasaki’s “Jammin’” Jimmy Weinert would win the muddy Rio Bravo MX Park round outside Houston, Texas, marking the first time in 500cc Trans-AMA racing an American had ever won. Like Pomeroy’s earlier 250 GP win, Jones’ win in the previous year’s Boise, Idaho Inter-Am, and even Gary Bailey’s 1969 win in the Firecracker International at Saddleback Park against the visiting Europeans, Weinert’s win was another major milestone in the Americans’ quest to catch up with the European masters.

The Trans-AMA Series would end with Adolf Weil, the German veteran, taking the biggest championship of his esteemed career, but it was Pierre Karsmakers who would win the grueling 23-race 1973 AMA 500 National Motocross Championship. As for the 250 AMA title, that had ended back in early September with the last stand-alone 250/500 AMA National outside New Orleans, and Gary Jones was again the champion, but this time he was on a Honda.

Tomorrow, we’ll bring you 1974 and the introduction of a whole new class for 125s, a whole new series in the AMA Yamaha Super-Series of Stadium Motocross, and a whole new superstar by the name of Marty Smith.