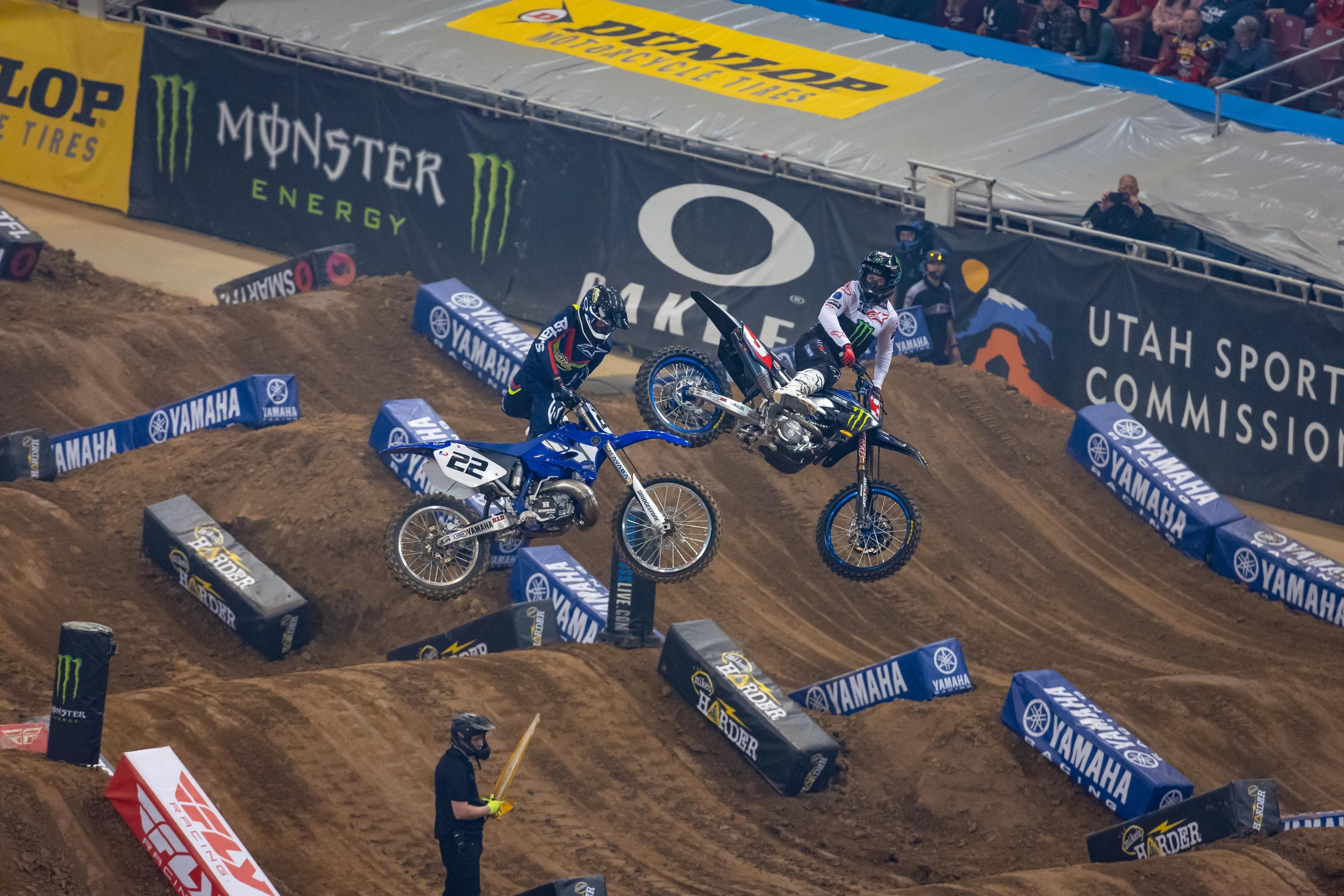 We had a pair of new winners in the 2022 Monster Energy AMA Supercross season at St. Louis with Marvin Musquin notching his first 450SX win of 2022 and RJ Hampshire collecting his first 250SX victory of his career. As such, we fired off some questions to long time pro racer Jason Thomas to get some of his thoughts on the two winners, Triple Crown racing, and much more.

Marvin Musquin got his first win of the season, but maybe most surprisingly was how competitive he was in the whoops. Is this a sign KTM is figuring out that bike or was this specific set of whoops too “weird” to tell?

I don’t think the whoops were really big enough or difficult enough to draw a conclusion like that. They were uneven and edgy but the steep, tall West Coast whoops are where Marvin and Coop were struggling. The whoops this weekend had plenty of traction and required more finesse than force. These East Coast style whoops aren’t typically as much of a problem and the KTM boys’ results are often better as a direct result of that.

Triple Crowns have mostly provided some great close racing, but this one didn’t seem to quite deliver. Thoughts as to why?

It was odd. Everyone just seemed to space out in unison. There was a few seconds between seemingly every key rider, and no one could close gaps or create battles. I’m befuddled as to why. Maybe the track was trickier than it looked?

RJ Hampshire has been searching for this first career 250SX victory for a long time. Now that he finally has it, will this be a big springboard for him?

I don’t really see it as an opening of the floodgates. He still has to deal with Jett Lawrence every Saturday. More than anything, it had to be a huge weight off of his shoulders. Until you get that first one, it’s always a lingering question of “Will I ever get this done?” Now, he can just race and let things happen, knowing that worst case, he still won a race in 2022. I am thinking if there is a residual bump in confidence here, it shows up in the Lucas Oil AMA Pro Motocross Championship where he gets to start over from scratch.

There seemed to be a lot of talk throughout the day of “new dirt” that was brought in for this St. Louis. What did you think of it?

I was fortunate enough to walk the track on Saturday afternoon and that was some sticky dirt! I think many of the crashes and mistakes we saw were a side effect of simply too much traction. I was always a big fan of the sticky, rutty races but they also come with a level of treachery. Mistakes are punished more viciously when dealing with six or seven ruts on a jump face.

Are you more happy that Mitchell Oldenburg finally made it back on the podium or more bummed that Kyle Chisholm just missed it?

I was really pulling for Chiz. It would have been such a great story to see him on the podium at this stage of his career. He is such a great guy and has such an underrated career. Hopefully he can pull it off before this East Coast series wraps.

Jett Lawrence said he didn’t practice starts all week and then got three mid-pack ones in St. Louis. What is lost in technique, timing, form, etc. if you don’t practice them during the week?

It’s unlikely that not practicing starts this week was the downfall. I thought he was being a bit conservative in the first corner and on the first lap. I don’t blame him after the issues he had at the prior triple crown event in Arlington. Jett has done thousands of starts. He didn’t forget how because he didn’t practice them this one week of the season. Having said that, he will probably practice a bunch this coming week and then holeshot in Atlanta. I still don’t necessarily think those two dynamics are able to be directly correlated.

Thoughts on 40-year-old Chad Reed’s speed in the whoops on a 250 two-stroke in opening ceremonies?

If Chad can do anything in this life, it is blitzing supercross whoops. The upside is that he got to blitz them when they were perfectly groomed and could really be aggressive. Whoops in that condition are actually fun. Blitzing them on lap 22 of a main event is not that much fun. Several decades from now when Chad Reed is no longer with us, I hope he has a picture of supercross whoops on his tombstone. He is one of the best to ever do it.

In case you were wondering, @CRTwoTwo can still hit whoops with the best of ‘em 😎#SupercrossLIVEpic.twitter.com/0j2q9DtHnj