MORGANTOWN, W.Va.—MX Sports Pro Racing, organizers of the Lucas Oil Pro Motocross Championship, sanctioned by AMA Pro Racing, has announced that its annual accolade recognizing the top performing freshman rider in the 250 Class will be renamed the Marty Smith Rookie of the Year Award, in honor of the late American motocross pioneer.

“Marty Smith was the original Rookie of the Year. He won the first AMA National he ever entered back in 1974, and then he became the first-ever 125cc AMA National Champion. It’s pertinent that we rename this prestigious award in his memory, in recognition of his contributions to the Pro Motocross Championship and the sport as a whole,” said Davey Coombs, President of MX Sports Pro Racing. “For an entire generation of racing enthusiasts Marty Smith was the epitome of cool in motocross. He proved that a motorcycle rider can become a household name alongside the likes of football, baseball and basketball stars. He was a charismatic, larger-than-life figure in motocross, one that any aspiring racer has and should look to emulate. We’re privileged to ensure that his legacy carries on to future generations of motocross racers and fans.”

Tragically, this past April, Marty Smith and his wife, Nancy, lost their lives in a dune buggy accident in Southern California’s rural Imperial Sand Dunes. He was 63 years old.

With his Southern California surfer looks and effortlessly smooth riding style, Marty Smith became the United States’ first motocross superstar. The San Diego native was a natural talent aboard a motorcycle, forming his own unique approach to racing that emphasized control and technique. This conservative method helped Smith earn his first major victory as an amateur at the 1973 Hangtown Motocross Classic, which resulted in a life changing phone call from Factory Honda. The Japanese motorcycle manufacturer put its trust in the teenager to bring it prominence in the newly formed 125cc AMA National class, in which Honda would be debuting its new CR125M Elsinore model. Smith made good on Honda’s gamble and went on to capture the inaugural 125cc National Championship at just 17 years of age. He dominated the four-race series, capturing two wins and nearly doubling the point total of the next best rider en route to the title, while still a senior at Point Loma High School. Thanks to the notoriety he achieved both on and off the track, he cemented the status of the 125cc division as the sport’s proving ground for aspiring young talent.

The following season, Smith successfully defended his 125cc title in even more dominant fashion, winning six of the seven rounds. And then, in 1977, he landed Honda its first 500cc National Championship when he outdueled his primary rival, Bob “Hurricane” Hannah, for the crown.

At the end of the 1981 season Smith decided to retire, which concluded a career that saw him collect 12 Pro Motocross victories and a trio of championships. He also won the first two U.S. 125cc Grand Prix events, in 1975 and 1976, as well as couple of rounds in what was a then-new AMA Supercross Championship. Smith will forever be known as the most influential motocross rider in the history of American Honda, where his talent, charisma, and success paved the way for the “Red Rider” to become one of the most iconic brands in American motocross history.

Smith was inducted into the AMA Motorcycle Hall of Fame in 2000 and remained a fixture in the industry through his Marty Smith Motocross School. He added to his racing legacy in 1991 by capturing victory at the legendary Baja 1000.

Marty Smith and his wife Nancy are survived by their three children, Tyler, Jillyin and Brooke, and seven grandchildren.

Read more about Marty Smith in the August 2020 issue of Racer X magazine: 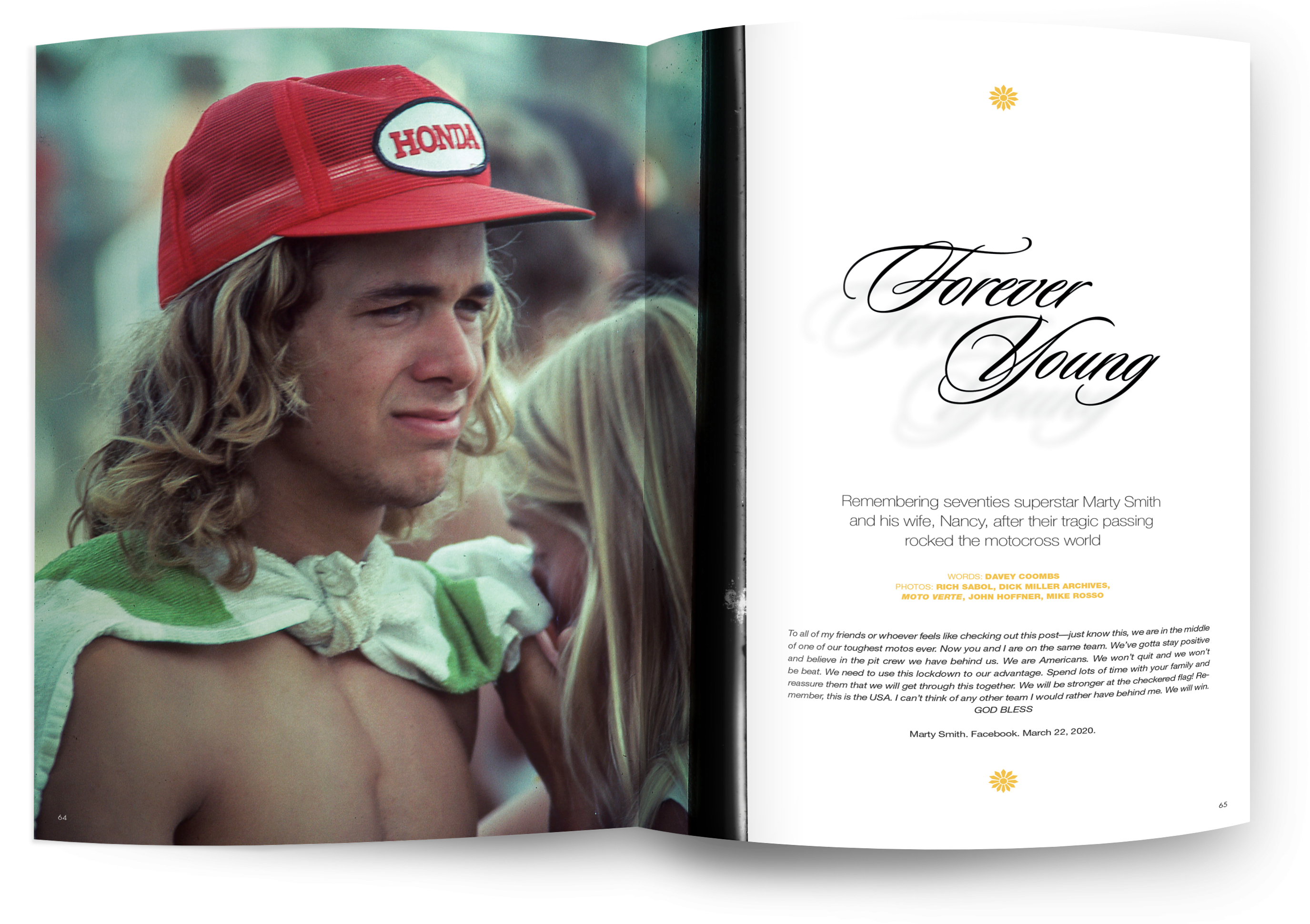