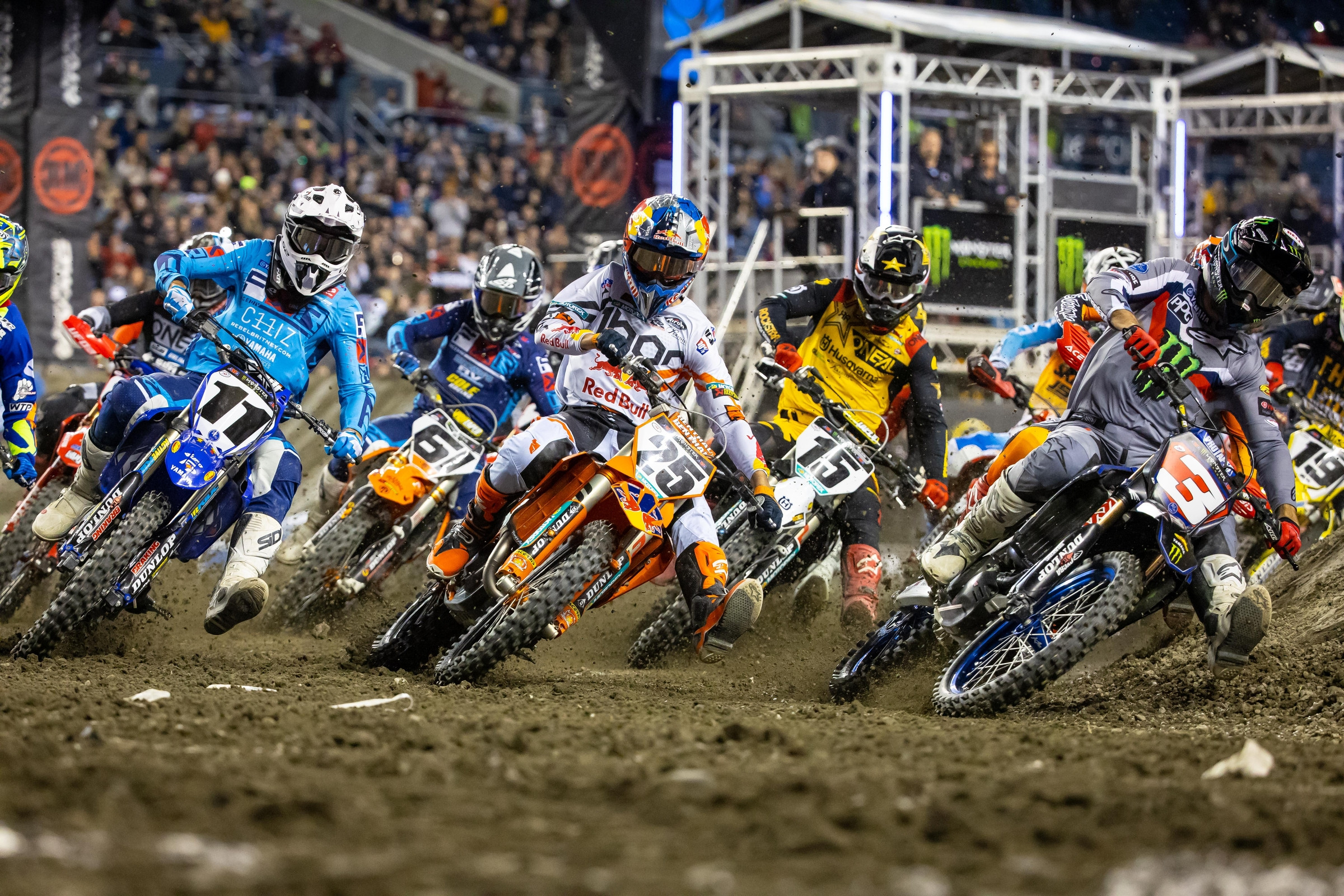 We’re back! After Jason Weigandt “some people” tried to bring OBS down, we stood up and fought the powers that be! Observations is back to its old glory, and many, many people are saying they’re happy about this.

Round 12 of the Monster Energy Supercross Series took place in Seattle and while the racing on the track wasn’t great, there’s still plenty to talk about regarding the series and more.

We’re going to keep it shorter this week people, after 12 straight weeks of observing the crap out of Monster Energy AMA  Supercross we need a bit of a break and we’re taking one. By the time you read this, I’ll be down in Cabo relaxing and not thinking about supercross at all.

Seriously, I think the question needs to be asked. Is Eli Tomac better than ever? Science says no rider is better than ever at 29 years of age, but this might be possible. If he wins the 450MX title again this year, there will be no doubt he’s better than any other Eli we’ve seen. Have we seen the old 15th to 1stEli Tomac SX races this year? No, because he hasn’t made mistakes/gotten garbage starts that put him back to 15th in the first place. The worst we saw was at the Minny [Minneapolis] Supercross where he went down with his teammate early on and took sixth.

ET won his fifth in a row in Seattle and looked amazing doing it. He was greasing the 4-3-3 with ease and every time he went for it, he did it easily. If he didn’t have it, no worries- he just jumped onto the tabletop. It was a tour de force performance for ET3 and he’s got an almost two race lead in the championship right now. The jury is still out on whether this is the best Tomac ever but it’s possible. And that’s amazing.

You can’t point to Tomac’s giant points lead and use that as most of your proof that he’s been better than ever, but I don’t think that is the best gauge. Generally, as the weeks go on, the cream rises to the top and we start to see some semblance of a pecking order, and the same riders hover around the podium every week.

Well, we have that from Eli but the other guys? Yeah, that’s a different story, we have Malcolm Stewart again setting the best qualifying time but unable to get the starts he needs to get on the podium more consistently. Cooper Webb is banged up and had another so-so night, Justin Barcia crashed while in second, Jason Anderson took second spot but last week was “helped” to a sixth by Barcia and the week before he suffered a concussion [Well, Kawasaki and Anderson won’t confirm he had a concussion in Detroit and Anderson tried to claim it was a shoulder injury in the press conference. Yeah, okay]. Chase Sexton can’t stay on two wheels right now (he didn’t race Seattle after a bad practice crash) and so on and so forth. It’s not one reason for any of ET’s challengers, it’s bone head decisions, it’s crashes, it’s average rides- it’s whatever.

Taking Olympic-style scoring (Hi Connor!) where a win equals one point, and for the last five weeks Tomac’s score is perfect. Here’s how it would look:

That’s how we end up where we are. So yeah, Eli Tomac’s been great, but the other guys are sureeee helping a lot with making this series a runaway.

Two straight podiums for Marvin Musquin and he got better toward the end of last year as well so maybe this is a trend. Look, I know Webb’s banged up (but that’s his fault) but Marv is only two points back of Webb in the standings. Not many people, including me, would’ve had that after twelve rounds. Musquin on a SX-only deal so it’ll be interesting to see what he does for next year. More on that below.

Mitchell Oldenburg was very good all day long. He rode the 450 one time after weeks on the 250 and he looked fast all day. He ate crap pretty good in the main and still got up and passed Brandon Hartranft back for a career high finish for him. Also, his teammate Vince Friese won a 250SX heat for the first time in his career so a great day for the SmarTop/Bullfrog Spas/MotoConcepts Honda guys.

Hunter Lawrence rode very well to another win and even though he looked to have things in control most of the race, Christian Craig was catching him by using his strength in the whoops to make up some serious time. The track was bombed out like Beirut so this wasn’t helping things but for every clean pass through the whoops for Lawrence, we saw two more that were shaky. Craig’s runs through the whoops were, duh, great. So, there was a chance that Craig could’ve won this thing if Hunter continued his run of “excellence” through the whoops but when he needed to get through them, he did. And he won. Great work for Lawrence and he would obviously prefer to be the guy with the points lead but he can still put pressure on Craig to ride well with two showdowns coming up. If Hunter can win those things, Craig’s got a lot of pressure to get on the box or this thing will get closer than CC and his team wants.

Craig was rather heated after Michael Mosiman’s pass for the lead took him down but calmed down afterwards. We texted a bit the next day and he admitted that he did overreact a bit on the podium. And that’s understandable, he was in the lead and then he was on the ground. But Mosiman, to me anyways, did nothing wrong and Craig needed to check up there and let the 29 by. He most likely would’ve gotten him back in the whoops. As it is he didn’t, and he went down. Another great ride to almost win thing.

I was talking to a top rider, and I remarked that I can’t believe that Jalek Swoll can’t seem to master the whoops. If you have a factory bike, access to great tracks, riding coaches, etc. and I can’t wrap my head around not at least being “ok” in the whoops. Swoll and his teammate Stilez Robertson are below average in maybe the most important section on a SX track. This rider agreed with me but said it’s just all commitment and no matter how good everything is, you just have to send it. Once bitten, twice shy I guess but even in practice when the whoops in Seattle were fresh and guys were flying through them, Swoll looked tentative.

When are we fixing the 250SX class? Anytime soon? No? When Hunter and Jo Shimoda take dives next year to stay in the class...then we’ll fix it? Probably not? Ok, moving on…

Privateer Island has been going off this year in 450’s and that’s cool to see. Those animals have been collecting points and main event spots like they’re Pac-Man gobbling pellets. Justin Starling qualified tenth, ahead of Cooper Webb! Tristan Lane made another main, Ryan Breece is crushing it and so on and so forth. Great to see, those guys are definitely giving the upper echelon riders a bit of a scare sometimes while they’re being lapped but hey, they can only race who shows up right?

These privateers are going great, but never, ever forget, Papa Chiz will always be at the front of the line. Since it’s timely right now, Chris Rock has a comedy bit where the big pork chop is always for daddy for when he gets home from work. Even though there are tons of privateers out there and even though he was on crutches on Wednesday due to a crash, Papa Chiz will always get the big pork chop out there. Never forget that you filthy Privateer Islanders.

I’ve heard some rumblings that Ken Roczen wasn’t going to ride outdoors this summer despite Honda saying that in the PR announcing Ken is taking a break. And truthfully, I wouldn’t be shocked if he didn’t do it. The MX series is a true grind for sure. Then I talked to someone at Honda HRC and they said, “99%” chance Roczen does the outdoors, the team is gearing up to start testing and all that. So, there you go.

Christian Craig signed a two-year deal for 450’s but I haven’t quite been able to figure out with whom yet. It’s possible, although he denied to me, that it’s with Triumph or Beta from some of the hints that are floating around out there. There’s not an easy landing place for Christian with the big six factory teams. Remember Colt Nichols and Justin Cooper are supposed to move up to the 450s next year also.

Dylan Ferrandis back to Yamaha? People there tell me they’re working on it, but other people say he’s talking to Honda. If I had to bet, I would bet he goes back to Yamaha though.

Musquin’s contract with KTM ends after the SX series. At first most of us thought he would retire. I hear that people close to him are talking to some teams to see if they would sign him for 2023. I was told that some days Marv says he’s done, other days he’s looking for a ride. Seeing Marv on anything other than a KTM would be VERY weird.

Jeremy Martin to SmarTop/Bullfrog Spas/MotoConcepts Honda? Something I heard out there…

Thanks for reading, email me at matthes@racerxonline.com if you want to chat about this or anything else.