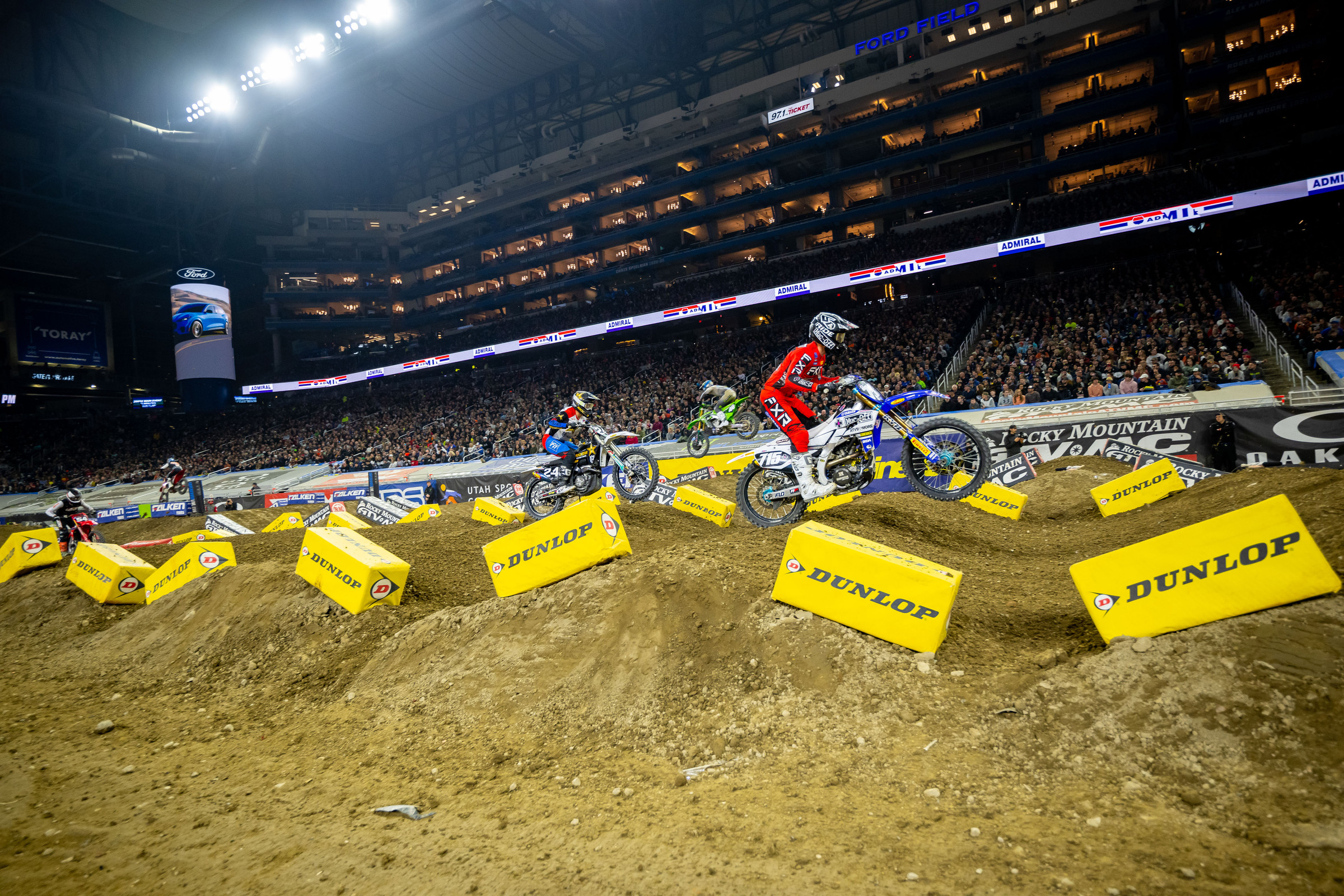 Our man Phil is on the gas! Phil Nicoletti will be lining up for the fifth round of the 250SX East Region Championship at the Indianapolis Supercross tomorrow. As he finishes up his final preparation for the race, today he is back answering your questions!

Hey Mr. Phil,
There has been a lot of talk in the chat room lately about the 450's having too much power these days and causing a lot of crashes. While I certainly agree that the 450s of today are grossly overpowered for SX tracks, in my limited field of vision from my couch, I don't see them being the reason for most of the crashes, but maybe causing harder crashes when it happens? I mean, let's face it....racing a 450 on these tracks would seem equivalent to taking your Big Bertha driver to the putt-putt course and wondering if you grabbed enough club! Since you have now raced both in recent years, I figure you are a perfect candidate to ask. Are the 450s too much power? And if so, what about making the premier class the 250s again, and developing a new 125 4-stroker for the smaller division?
Brad (woodshed addict)

Brad,
I have to agree with you that a 450 is way too much power for a supercross track. With that being said, a rider can tune it almost anyway they want to. What technicians at a factory level, or decent engine builders can do is crazy. They can de tune a 450 to the point where you think the clutch is completely smoked and the rear brake is stuck on. The 450 riders are the best in the world, and they can handle the power and manage it. Most of the guys on the line know they don’t need a fire breathing dragon, it’s all about having power that is reliable and useable. But the idea of making the premier class a 250 again is just dumb. That won’t ever happen. I do think at a ground level, the amateurs don’t need to be on a 450. Nowadays, a lot of the kids are veering away from 450s and riding 250s in the open classes anyway, which is much, much different from the days when I was in amateur. Having 15-16-year-old kids riding a 450 at 130 lbs. is crazy to me; but trust me in my day we had to sack up and try to manage that beast. Honestly, being able to ride it isn’t the issue. It’s when something goes wrong, are they strong enough to hold on and tough enough to take the hit when the 450 chases after them when they are cartwheeling? You know that Mike Tyson used to say: everyone has a plan until they get punched in the mouth. A 450 punches very, very hard.

Señor Filth,
As I sit here and watch the Detroit Supercross I have to wonder, do the almost obnoxiously long team names need to be rattled off by the announcing crew every time someone makes a pass? Or is that something that’s “paid for” by the title sponsors? I realize that this sport is 100 percent paid for by sponsors but is that totally necessary? It seems to become almost pedestrian to some announcers, a massive detriment to others, and a mouthful for all. Also congratulations for the awesome riding this season I’ve been very entertained following you this year and I wish you the best.
Sincerely,
Too tall for my own good

Too Tall,
I’ll probably get in shit for it, but I don’t like hearing it either. But I’d MUCH MUCH MUCH rather hear them rattle off 50 team sponsors than hear them say Chase Sexton on the red Honda. Or Eli Tomac on the blue Yamaha. Or “Justin Anderson” on the green Kawasaki!!! I mean…….FFS! I know what the manufacturer colors are!!!! I don’t care about Harry or Bobby just tuning in because they are flipping through the damn channels!!! It sucks, because I know NBC or whoever has certain parameters they want the announcers to stay in. I’m all for the sponsor part. Showcase the sponsors that pay for the sport and help fund the industry. For instance, our team at ClubMX. We have really good sponsors that fund our team. Ready? FXR, Muc-Off, IAMACOMEBACK, Motosport, ATVs And More. Show what they are about. Also, I don’t care about riders’ girlfriends, their favorite ice cream, or their hidden talents. Show it like F1. Show it for how gnarly the sport really is. Rant over.

Phil,
You already have like three guys on your ClubMX team battling for spots in the main every week, and then I know you have the Phoenix Racing Honda guys also riding at ClubMX. Probably some other privateers, too. How do the weeks go when you guys are battling for race results but also “helping” each other during the week? Does any drama spill into the weekdays? Do some guys not want to share secrets and stuff like that?
Jimmy from Nebraska

Jimmy,
First of all, let’s get it straight: ClubMX, FXR, Muc-Off, IAMACOMEBACK, Motosport, ATVs And More. Nice. Now you ask a good question. We have one helluva crew at ClubMX during the week for practicing. Sometimes we have up to 15-18 guys in a practice day. So there is mayhem for sure. It’s awesome, because I HATE riding by myself. So when it’s cold, a little rainy and shitty, I always have a load of dudes riding down to the track with me for practice. Sometimes we have some dramas on practice days. I love it, it’s actually quite entertaining. You can’t have that many guys riding and not except someone to yell at someone throughout the day. It’s impossible. But at the end of the day, everyone is there to get better for Saturday. Some days, Enzo Lopes is fastest. Some days Kyle Peters smashes it. Some days Justin Brayton just waxes. Some days Garrett Marchbanks crushes it. But at the end of the day, a Tuesday doesn’t mean jack shit. Saturday night at 9 p.m. is when it counts.