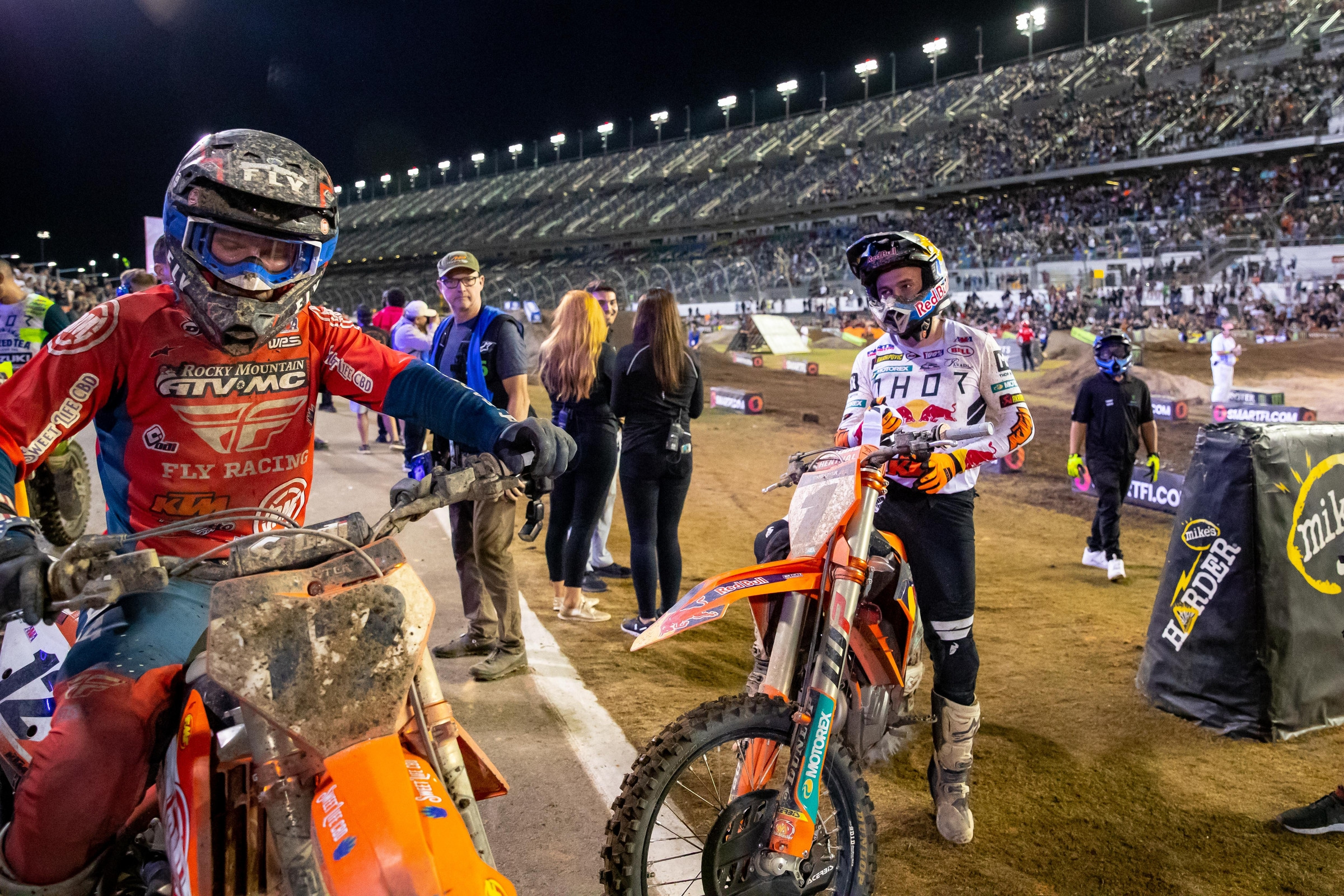 Defending Monster Energy AMA Supercross champion Cooper Webb had been winless in his title defense through eight rounds of the 2022 season. The Red Bull KTM rider has struggled to come to grips with his new 2022 KTM 450 SX-F Factory Edition and the 19-time 450SX main event winner has now endured his longest winless streak in supercross since joining KTM in 2019. It looked like the drought may end at Saturday’s Daytona Supercross though, as Webb quickly got into the race lead on the first lap and slowly pulled away from Honda HRC’s Chase Sexton.

Monster Energy/Star Yamaha Racing’s Eli Tomac would eventually make his way around Sexton for second on the seventh lap of the race and the race was on from there. Tomac was seeking his record-breaking sixth Daytona Supercross victory and it seemed inevitable that he would catch Webb out front. But as the race continued on, Webb managed to hold a small lead that hovered right around two or three seconds.

Then the duo began catching lapped traffic. Webb was initially held up by a few riders before Tomac as well, got caught up a few times as the typical flow of working through the back markers progressed. But on lap 16, Webb caught Rocky Mountain ATV/MC-KTM-WPS rider Shane McElrath as they entered the lone set of whoops on the track. Webb selected the far-right side of the track, which he had been intermittently taking throughout the race. Unfortunately for him, McElrath choose to use the far-right side of the track to move aside for the leaders. He gradually came across into Webb’s line and practically brought the Red Bull KTM man to a complete stop as they entered the rhythm section after the whoops.

Eli Tomac pounced at the opportunity as he already had great drive down the left side of the whoops and shot right into the lead. From there, the Yamaha man took off and immediately pulled out a few second gap to lead the final three laps and win his record-setting sixth Daytona Supercross.

“It’s unbelievable to get win number six, and it was everything I wished for!” said Tomac. “It was a tough day, though. I was having a little bit of a tough time with the track earlier in the day, but once the lights came on, it was like I flipped a switch, and it was game on. Me and Cooper rode wire-to-wire for most of the race. We were going back and forth around the different parts of the track on being the better guy, and I was able to capitalize on him being stuck behind a guy and made the move. I put myself in the position for that move, though, and just went on from there. It was such a cool night for us.”

The pass may have been coming anyway, as Tomac had been slowly pulling that gap in for much of the second half of the race and did have a better drive down the whoops in that particular moment. However, Webb is always so cagey late in these races that he would have at least made life a bit more difficult for Tomac to snatch the lead away had McElrath not intervened.

“Man, I was so close to getting the win, I could taste it,” said Webb. “I rode great the whole time and I felt like I rode strong, I knew Eli was coming because he’s so good here. I should have maybe anticipated a little bit better but it’s definitely a bummer when a race is decided - or goes that close – and a lapper gets involved but it’s racing. Overall, I’m happy but it sucks. I knew how hard I needed to push to go the distance, but it happens, I guess. We’ll come back next week and try to get that first win of the season.”

The frustration continues for Webb in 2022 as he continues to look for his first win of the season as we head into the second half. Daytona has been well to Webb before, but it still was a huge positive to see Webb have a solid day in qualifying, lead nearly the whole race, and keep Tomac, who is now quite literally the King of Daytona, at bay behind him for so long.

As for McElrath, he did reportedly speak to Webb right after the race, but Webb wasn’t in the mood to speak as they both had just come off the track. McElrath would later go to the Red Bull KTM truck when things had settled down. Both riders ride and train at the 83 Compound in Florida so the two will have continued chances to talk about each of their perspectives on the situation and this is likely to be put behind them quickly moving forward.