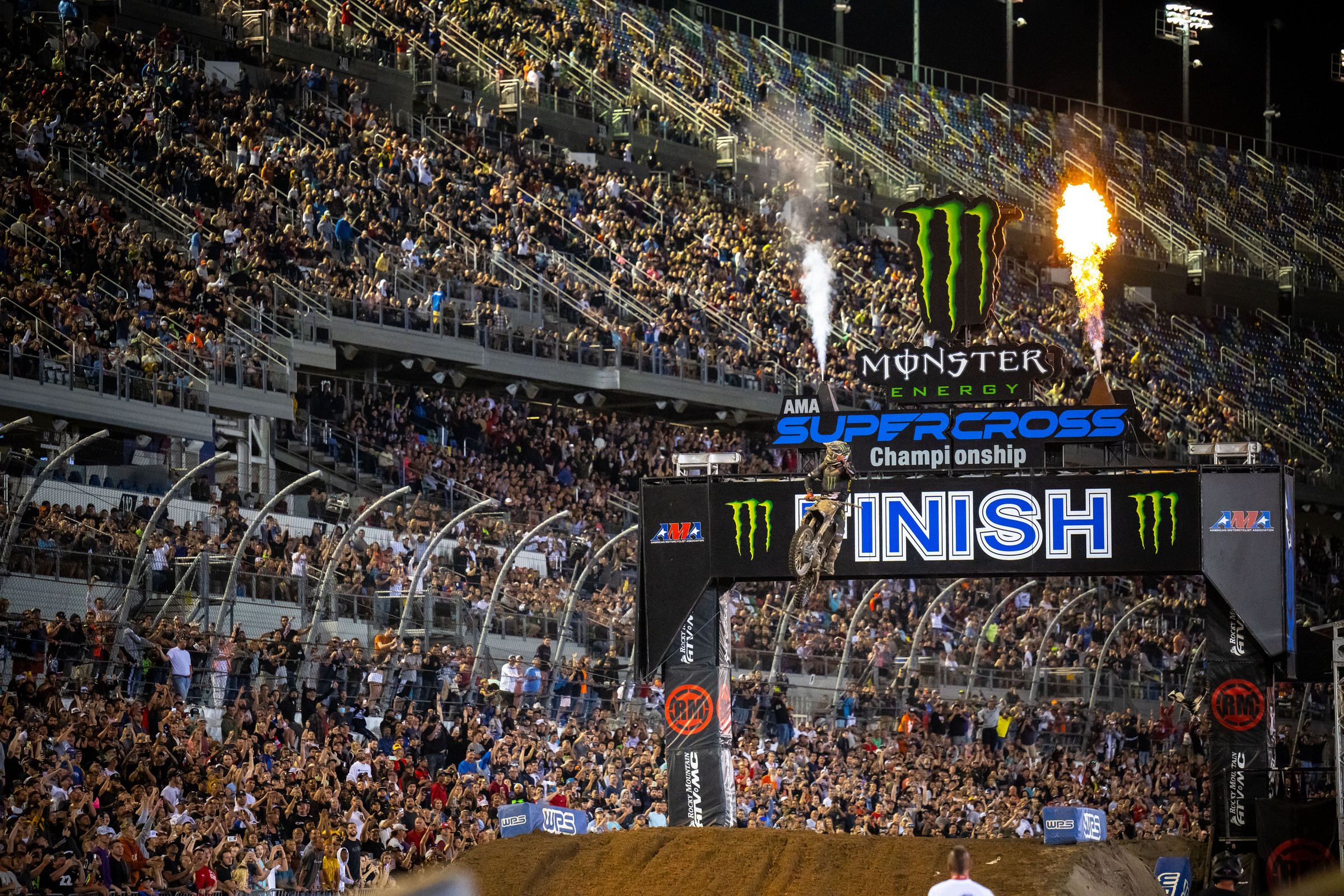 The Conversation King of Daytona

It was a record-breaking night for Eli Tomac at the 2022 Daytona Supercross. His sixth victory in the 450SX class at the speedway makes him the all-time winningest rider at the track, breaking a tie between him and five-time Monster Energy AMA Supercross Champion Ricky Carmichael. The win also moved into a tie for fifth all-time with Ryan Villopoto for 450SX main event victories (41) as well, and the next milestone of fourth all-time is just three wins away now. For Tomac, these marks only matter so much. He mainly wants to think about the championship and his points lead that ballooned out to an 18-point advantage with the win. But even he couldn’t help but enjoy the record-setting evening when he spoke with the media in the post-race press conference.

Eli, you’ve had to been hearing it all week long and definitely all day, getting that sixth one. Now that you do have it and we’re past it, what does it feel like to stand alone with that record and know that that’s a record that will be hard to break, with you starting your winning run there so long ago?
Eli Tomac: It’s unreal. I think back on it. I just think of this place and it's one of those places where it’s either good for you or it’s not. It’s just been really good for me. Today though, I had a lot of doubt in my mind. To be honest, I was not feeling great in practice. I was dinking with clickers and going back and forth on stuff. I felt like I had my work cut out for me. But once the lights came on, I don't know, it was like everything started working again. Six is crazy.

The last couple laps you were catching up to Coop [Cooper Webb]. It was kind of yo-yo back and forth a little bit. What were you thinking there with maybe two or three to go? Did you have a spot? Did you think you had a spot? He was holding pretty tight.
Yeah. It was yo-yo. The problem is I thought I was catching him a little bit in the whoops but then he would pull me actually after that, I think around the finish line and then even a little bit before the whoops through the tunnel. So, I could never really get really close to him. That lap that the pass happened, I was a little bit closer and then obviously it was a gift on the exit of the whoops. It was crazy wire to wire. We were just on rails really that whole race.

I think this is the most points you’ve had leaving round nine on your 450 career. So, can you talk about just the championship and obviously the little bit of shake-up with Jason [Anderson] back there? You gained a lot of points on him leaving today.
It’s just racing. We put ourselves in a good position. I credit that to everyone around me. Just a good group as a whole. Thankful to do it here tonight with the win.

Was there any point in that race where you were looking to the championship? Were you going to settle for second or the whole time did you just want to get that win? Can you talk us through that mindset there?
I was thinking that. I even glanced up at the big tower to see where Jason was, and then when I saw that it was like, second, I may have to settle with that. At the same time, Daytona, anything can happen. I kind of kept trucking along, and that was it. I never felt like I was in a position getting too wild or too crazy. Just trying to stay on Cooper’s wheel as much as I could.

Towards the end of that moto, we seen the bike was starting to get hot, coolant coming out. Did the team allude to you at all that this was happening? Did you ever have the thought, we might need to back this thing down and run it home for points? Or did you know anything about that?
I had no idea. They did mention it to me afterwards, but it was probably that sand and the way the whole track is. It’s just a beast. It’s like the Southwick of supercross. It’s torn up. The ruts are all crazy. Before the tunnel jump, the rut was more than above the pegs. We were making this tiny lip on the side. It was putting the bikes to the test.

Going in behind Coop into that sand corner, were you able to see at all?
It was just a sand blast. You can kind of see and you’re just hoping that the rut doesn’t go away. The right-hander was the sketchy one, for sure. It was getting a big hook in it, a big hockey-stick rut in it. You get sprayed in that turn, really bad. As much as it covers your hands. You can feel it on your grips and your hands. That section is tough.

At the start of that one, you kind of got stuck in the middle of the stuff that was going on between Mookie [Malcolm Stewart] and Jason. Was there a point there where you kind of just sat back and let it play out in front of you? Because obviously what happened afterwards happened.
Yeah. Turn two was just sketchy. It was like a big sandwich. I went in and I tried to half guard the inside. It’s always tough to know how far you need to go inside on that second turn. I came in and I ended up bumping into Malcolm, and then Jason came inside of me and bumped me. Then it was kind of a little bit of an explosion and Malcolm went flying off the track. That was it. I was just in a sandwich. Turn two is always like that for us in supercross. There’s always some sort of contact, it seems like. Lucky to get out of that one clean.

Obviously, you saw the chaos and the excitement from the crowd out there. I would argue that winning your sixth here is as big or bigger than winning a supercross title. Can you comment on that? How close is this? That was crazy.
It doesn’t top the title, but it’s very cool. I don't know what it is with this place, but it’s just worked for me. It’s clicked for me. That’s the mindset you have to have here and how you have to go about the day here. It was so cool. That was the biggest crowd we’ve had here and with the best energy. Not even close. It was cool to see.

I know in every race there’s sketchy moments. You guys were talking about the track. There was a moment watching it on TV coming out of the whoops where you got really sideways, maybe four or five minutes left, and you still did the triple afterwards. Do moments like that stand out post-race? Do you even remember that moment? What was your heart rate like?
I remember it a little bit. It was a pretty good step out, but not anything that was like, “Oh, my. I need to change up my line.” Maybe it looked worse. I felt like I was okay in there for what it was.

Did you guys notice a difference once you guys were able to go through the practice and through the different heats, between that last heat and the main event, did you guys notice any difference in your mindset when you headed into the main event?
Yeah, this track is a whole other beast. It changes the whole night, the whole day. I would say this year specifically, it was even more broken down by the end of the night. Bigger ruts, more lines. Just super challenging.

One of the things that I seem to think that you do very well at this particular race is being smooth but also very aggressive. Speak to that a little bit of just how tricky this place can be to still be smooth on the racetrack when still pushing.
That’s how you have to ride here. I think it’s because it has so much sand in it, it’s like rushing things a lot of times doesn’t work and you have to focus on momentum and traction and not making a mistake. There’s so many places when it gets torn up like this where you can make the mistake and guys can sneak away. Here you’ve got to master the sand and think about traction.