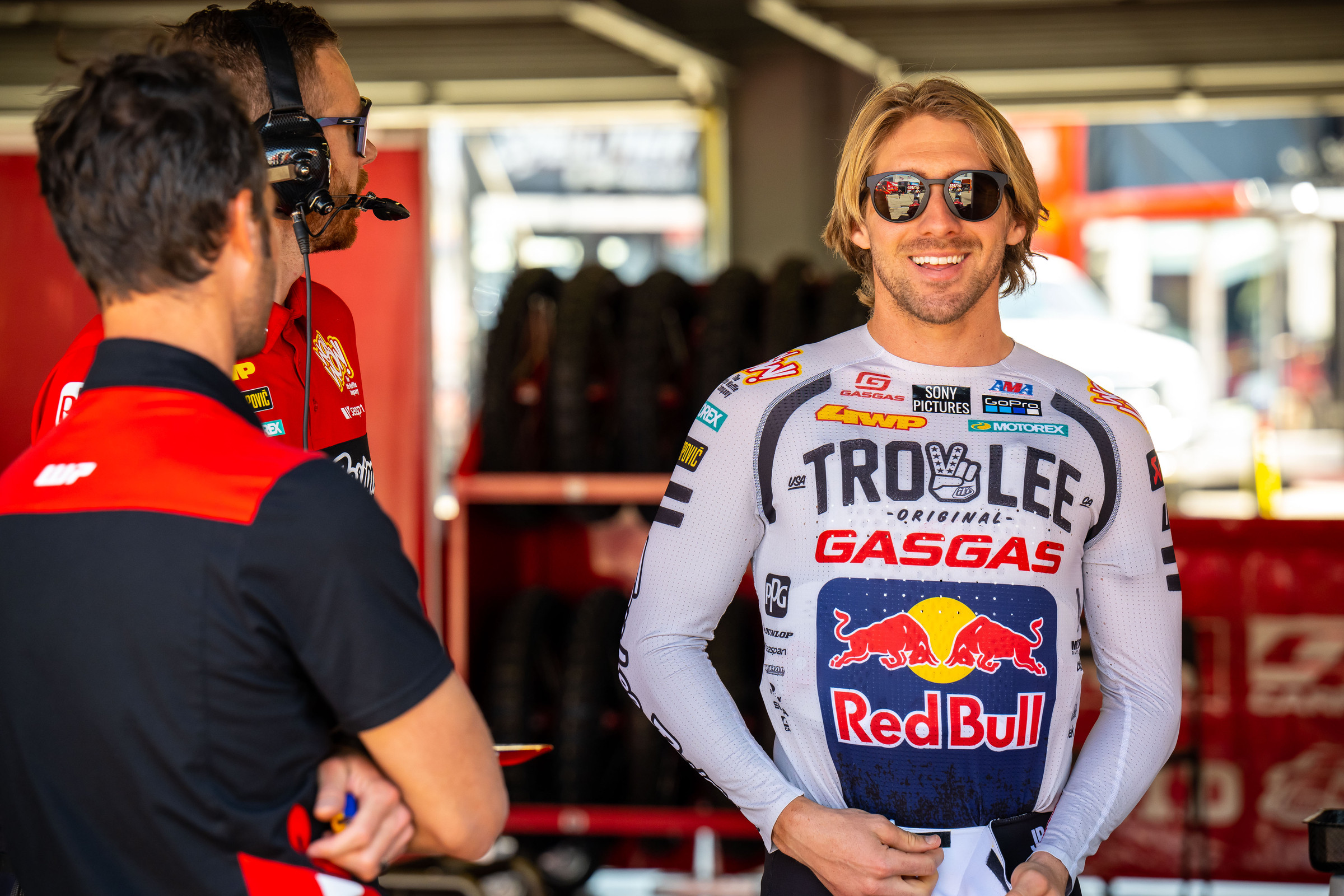 Everyone loves Daytona—on press day. The Florida sun is shining, a nice reprieve from the freezing conditions at the last two rounds in Minneapolis and Arlington. The track provides a nice break from endless laps on regular supercross tracks. However, thoughts might change later in the main event tonight, when the track is super rough, and the riders are super tired. We shall see, but for now, we found nothing but positive vibes chatting with the riders.

We asked three of them what they think about the weekend.

Racer X: Everyone likes Daytona, and I feel like it works pretty well for you.
Justin Barcia: Yeah, I like Daytona, I’ve had good luck here. It’s not far from home, good vibe, and I like the sand. It’s like supercross and motocross put together.

You are one of the guys who is comfortable hanging off the back, and the way this track gets, eventually you’re going to have to do that.
Yeah, you need to be able to be free and just kind of send it and let the bike do its thing. This track gets rough. It’s a supercross track but there are options there for sending it and hanging it out, and that’s kind of my style. I also like the weather out here. It’s beautiful, and we’ve been in the cold the last few weeks. It just feels really good here.

Racer X: Look everyone has a place in Florida where they ride, everyone has moved here, but for you, you’re a legit Floridian.
Malcolm Stewart: Oh yeah, Polk County boy. Live about an hour and a half north. I like this track, it’s always interesting for me, and the Florida dirt definitely reminds me of home. I think what brings the energy here, though, is the way the crowd is. Not just that I get fans here from my hometown, but just that it’s different. I think a lot of it is just that the fans are so close to the track! The fans are on the straight for the Daytona 500, right next to the side of the track. It’s interesting here racing at night, too. The dirt is a little darker, and it gets rough with these wall jumps. Another thing that’s interesting, this is like another A1. Everybody looks forward to it, it’s like a refresh button. Second half of the year starts here.

First half the year has been good for you.
It has been. Everything, so far, the season is starting out great for me. It’s just a matter of time before I get to pop one of those big W’s, hopefully tonight is where it happens.

Look if you were to pick one, this would be the one?
Well, I’m trying every weekend! Definitely isn’t happening because of lack of effort! But definitely to win this one in front of the home crowd, that would be great.

Racer X: Well, we know you’re on the verge of history, if you win six you take the all-time record, but I would guess you don’t want to get too far ahead of yourself. One step at a time?
Eli Tomac: One step at a time, but we have a chance! We’re lining up, and it’s cool.

What is it about Daytona that works so well for you?
You just have to be comfortable in this environment, right? The way the track forms, how it has sand, how the track breaks down, still has the supercross jumps but it’s just a gnarly beast at the end of the night, and the lighting gets tough, too. All those things combined, you either love it or hate it. It’s a fun challenge and I just enjoy it.

Some of these wins, you’ve had to come from behind late. Do you have patience, and confidence, that eventually it’s going to come to you?
I do. You know it’s going to be a long race, right. You have time to get it done. Mindset here is huge.

Have you started to think about what it would be like to get that sixth win, and make some history? Or do you not want to go that far yet?
I mean, yeah, it’s crossed my mind, but it’s not like I’m winning the championship or something like that. Any win here in the 450 class is good, but even the trophy here, it’s a different trophy and it’s cool. There’s just no place like it. Another thing, too, we get the fans down there on the side of the track, and if you win you do the burnout over there. It’s just really cool.