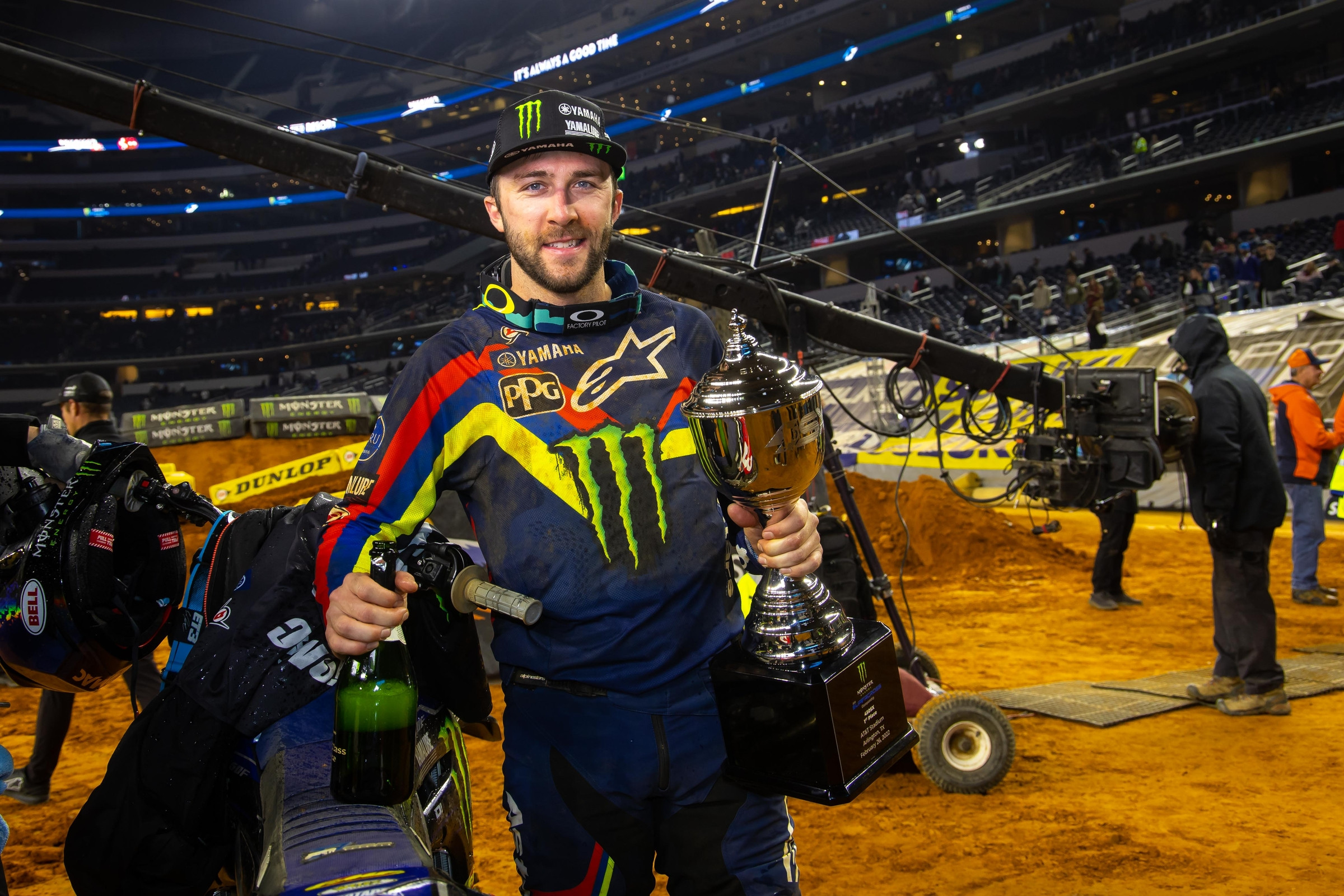 The Conversation Fun and First

We’ve never seen Eli Tomac have this much fun at the races. He didn’t win any individual race at the Triple Crown in Arlington, but yet he still won the night’s overall with 3-2-2 scores. That wasn’t the whole story, though. Jason Anderson actually out-dueled him in the second and third races after great battles, but Tomac took it in stride, not only because he was winning the overall, anyway, but because he just seems to be loving every part of racing life these days. Even if he doesn’t win the battle, he enjoys the battle!

He’s still competitive, though, don’t worry. Last week in Minneapolis he got knocked down on the first lap by his teammate Dylan Ferrandis. Tomac wasn’t mad at his teammate, he only blamed himself for getting a bad start and then bobbling on the first lap, which allowed Ferrandis to get around him and set up the rest of the chaos. As he told us: “If Dylan didn’t pass me down the second or third rhythm, and I was in front of him, I wouldn’t have gotten tangled up. So those thoughts were running through my head—if I had just stayed in front of him, or gotten a better start….”

Eli is still sweating the details, but he’s having fun while doing it.

He talked to the media after the Arlington race, round eight of Monster Energy AMA Supercross.

Eli, it’s the Triple Crown format. You and I have joked about it in the past. You’re really, really good at these things. Two for two on the season. Now that you’ve been through these two, what’s your thoughts as we have one more on the schedule?
Eli Tomac: They’re good for me, for some reason. It was kind of a night of consistency. I felt like moto one, I got pretty lucky with a lot of just wild stuff going on. That was it. Moto two and three, that was the good racing for me. It was exciting. Me and Jason made a bunch of passes on each other. It was just a fun night of racing. So, can’t complain about these things at this point. Another overall. Just a good weekend.

You didn’t win the third race, but was it still fun to get into that back and forth like that? You guys were playing a little bit of a game. The crowd was into it. Is it still fun even when you don’t come out on top?
Oh, yeah. It was fun. We had a couple good moments. One time when we went over the finish line I almost thought we were going to roll it! [Laughs] We were both just waiting, waiting, waiting, then we doubled! Then another time, going into that 90 before the whoops, I felt like he was better than me on the inside rut. So then I moved to the inside rut and that lap that I went over there he rolled it. I’m like, gosh, dang it! That was maybe my chance. Other than that, I just tucked in behind him and that was it. I knew the points spread, so I just stayed there.

[Anderson was also asked about the same battle]

Jason, I’ll ask you about your perspective in that same battle.
Jason Anderson: Yeah. I think for us right now, we’re riding really good. It’s hard for each of us to break away from each other. I feel like if he’s in front, it’s hard for him to break away from me and if I’m in front it's hard for me to break away from him. So, it just makes that race craft so important. Like he said, we went over the finish in one lap, I wanted to square him up but he read me like a book! [Laughs] So, it was hard for me to do it. Then you come in the other corner and he goes to the inside, because he thinks I’m going to dive in the inside [and] I’m just setting up outside. So, it’s just a game. But at the same time, we’re ripping while we’re doing it, so it’s pretty awesome. That’s what he fans need. I enjoy racing like that. It’s fun.

Break down for us a little bit your current schedule for training. Whereabouts are you?
Now I’m back in Colorado, so that’s it for me. I made the move last week. Right now, that’s all I’m doing. We’ve got Daytona next week, so I’m staying there. Don’t have any plans to do anything else right now.

With you in the championship lead right now, obviously you’re where you want to be. So, how do you take on these next few weeks?
Just try to keep doing what we’re doing. Looking forward to what we have in front of us for races. That’s it. Last week I really couldn’t believe it, that lap that I made that mistake on the double with my teammate. Glad for the rebound this week and looking forward to Daytona and what we’ve got in front of us.

Tonight the roller coaster up and down of your results, good rides, having to come through the pack, is it more mentally fatiguing a night like tonight than say what you had to go through last night coming through the back of the pack? What’s the difference between the two?
Well, the thing is with these, if you have a bad first one or if you podium you’re like, “Well, I have a chance still. I’m still in the game.” That’s the good thing about them, but the bad thing is there’s three races and they’re gnarly and a lot of stuff happens in them. That’s just the way they are. I don't know. Tonight it didn’t feel too bad, too gnarly. There’s definitely certain tracks and certain places where they are gnarly. I’m okay with them, I guess now.

Watching the race tonight I think a lot of riders in both classes were caught out by track conditions, maybe it being a little bit less traction than some guys expected, based on the amount of mistakes we saw. Did you notice personally a difference in Arlington this year?
It was a track that had a hard base on it. The dirt looks really good, and it is, it has good fluff in it, but there was still a dry base underneath that you kind of had to fight and pay attention to. It was easy to slide. Once again, the whoops were pretty nasty. They get beat up every weekend, but these were kind of West Coast style whoops where you’re dancing around. It was a little bit of both. You’d get some traction in some of the fluff, but there was definitely a base there.