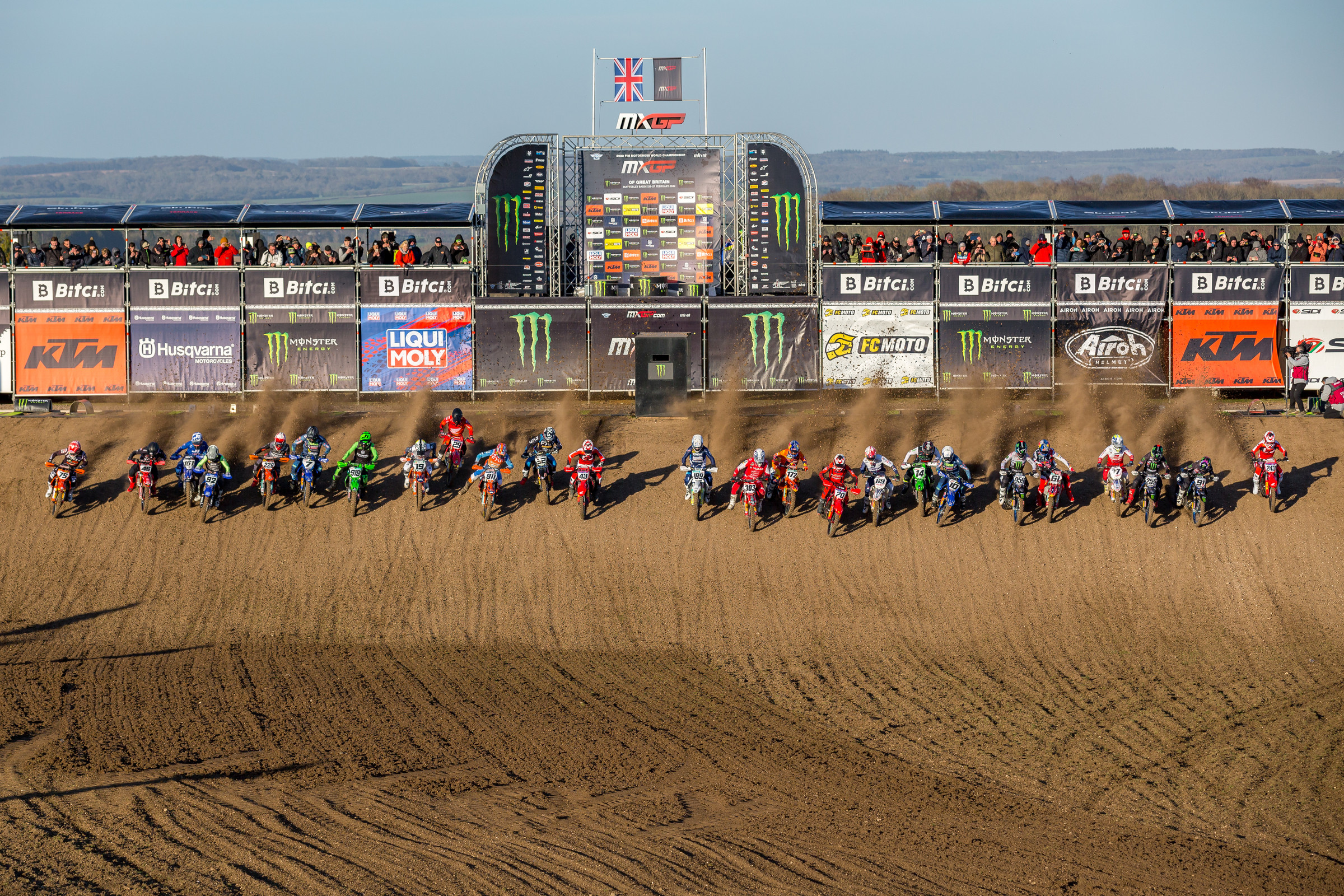 The FIM Motocross World Championship is underway for 2022 via the MXGP of Great Britain. We have plenty of coverage planned for the new season including the standard text recaps as well as a new podcast with insiders Adam Wheeler (journalist with OnTrack Off Road and Lewis Phillips (journalist with MX Vice).

Listen to The Racer X MXGP Review Show—the newest addition to the Racer X Podcast Network! Join hosts Adam Wheeler and Lewis Phillips as they break down the opening round of the FIM Motocross World Championship at Matterley Basin.

Gajser who secured his first Grand Prix win in Matterley Basin for the first time since 2016, when he still raced in MX2, and now heads into round two with the red plate back on his CRF450R. He split moto wins with Jorge Prado, with come-from-behind charges in both motos. Gajser, though, fell while leading moto two, and Prado slipped through to take the moto win. Gajser's 1-2 was enough for the overall win, with Prado going 4-1.

Team HRC’s Tim Gajser got squeezed in the start and was around ninth on the opening lap, as Honda 114 Motorsports’ Ruben Fernandez crashed.

Prado led Seewer, Coldenhoff and Alberto Forato of SM Action Racing Team YUASA Battery, as Maxime Renaux of Monster Energy Yamaha Factory Racing got by Gajser for fifth and set his sights on Forato, as F&H Kawasaki Racing’s Jed Beaton was right there in the mix behind Gajser. The Aussie eventually finished the race in fifth position.

Seewer then picked up the pace, setting the fastest lap of the race which allowed him within striking distance of Prado. And he did just that, to take over the lead.

Renaux took fifth from Forato and Gajser followed into suit, to remain close to the Yamaha rider.

We then saw Fernandez come into pitlane, before heading back on track again. A few laps later the Spaniard retired from the race.

Gajser then picked up the pace and was all over Renaux. Meanwhile Renaux was busy battling his teammate Coldenhoff, which allowed the Slovenian to close in further.

Gajser then launched an attack onto Renaux, and then passed Coldenhoff too, to move into third position. It didn’t take long for the Honda rider to also catch Prado and slip into second position.

With 12 minutes to go Seewer had a 2.325 second advantage, but that was brought down rapidly by a hard charging Gajser. We then witnessed an intense battle between the pair, which lasted seven laps, until Seewer went down with just two laps to go. This gave Gajser a clear path to take the first MXGP race win of 2022.

Seewer managed to get going quickly and secure second place, while Renaux finished third ahead of Prado and Beaton.

In race two, it was again Prado with the Fox Holeshot ahead of Coldenhoff and Seewer, Fernandez and Gajser. Alessandro Lupino of Beta SDM Corse MX Team went out of the race early on, similar to race one.

Prado was looking to waste no time at making a run for it, as he extended his lead to over 3 seconds, while Beaton chased Fernandez for fifth.

Gajser meanwhile was making progress on Seewer for third and on lap three was ahead of the Swiss. A couple of laps later he also managed to get by Coldenhoff and then it was game on for the race win.

Gajser was flying and managed to bring down Prado’s five second lead down to almost nothing in a matter of a couple of laps, with still more than 10 minutes on the clock. He took chunks of time out of the Spaniard until finally on lap 11 he made the pass stick.

But the Slovenian’s lead lasted just a lap as he went down with three laps to go. This was the perfect opportunity for Prado who was keen on getting his first race win of 2022.

Despite Gajser’s best efforts, Prado was able to stay in front and win the race by just 0.500 of a second! Coldenhoff also held of his teammate Seewer, with Fernandez crossing the line in fifth followed by Renaux and Beaton.

With a win and a second, Gajser took to the top step of the podium and now leads the MXGP Championships standings, with Prado second with 43 points and Seewer third with 40.

Tim Gajser: “I just leaned the bike too much and touched the ground with the rear brake, so I went down, and it was a weird crash but anyway I have to be happy. The speed was there, though I didn’t have good starts in both races and that meant I had to work even more for it but I’m happy with my speed and to start the season in this way but it’s one of 20 and still plenty of racing to go. I am looking for to Mantova.”

Jorge Prado: “Today was a great day. To start the season on the podium was perfect. First race I felt a bit rusty, and I knew I would be better in the second race. I took a good start and I had a good pace but Tim was kind of flying, so he passed me, he made a small mistake so I knew that this was my chance and I could not throw it away, I pushed as hard as possible, he was still there on my rear wheel but I won. I am really happy and couldn’t ask for more.”

Jeremy Seewer: “A really positive day, I have never started the season with a podium so that’s pretty good and it shows I’m ready. I’m super happy, except about the first race. I thought I had it in the pocket but I lost the front a bit and my legs weren’t long enough to hold myself but that’s racing, I’m on the podium and I’m ready for more. I feel really good, I’m healthy, I’m fit, I’m happy with the team around me so all positive.”

Team Ship to Cycle Honda rider Stephen Rubini was also looking strong as he was pushing Horgmo for fourth, though was caught out by Monster Energy Yamaha Factory Racing’s Jago Geerts.

Horgmo then went by De Wolf, as the Dutchman looked to respond. And just when Geerts was looking to be moving forward he crashed and re-joined down in ninth.

Hitachi KTM fuelled by Milwaukee’s Isak Gifting was also in the mix as he started to get pressured by Roan Van De Moosdijk of Nestaan Husqvarna Factory Racing and Big Ban World MTX Kawasaki Racing’s Mikkel Haarup. Gifting crashed now too long after.

Horgmo then dropped from third to fifth after making a mistake and going down, while Längenfelder set the fastest lap of the race and was getting comfortable in the lead.

Längenfelder remained the fastest rider on track as he pushed forward and extended his lead over Vialle to 7.618. De Wolf was also looking fast as he started to get closer to Vialle, but in the end it was Längenfelder who won his first ever MX2 race ahead of Vialle, De Wolf, Geerts, Rubini, Moosdijk, Horgmo, Haarup, Adamo and Hakon Fredriksen of Honda 114 Motorsports who was making his debut in MX2.

In race two, we saw Längenfelder put his GasGas machine out in front once again as he claimed the second Fox Holeshot of the day. He was followed by Vialle, Horgmo, Geerts, Van de Moosdijk and Gifting.

A few laps later, Längenfelder made a mistake which allowed Vialle to move closer and not long after, the pair were side-by-side, with Vialle finally making a move for the lead. Vialle then put his head down and clocked the fastest lap of the race. And he followed that up on the next lap too. All was looking good for the Frenchman as he was on track for the race win and overall victory, but a crash jeopardised that. He did however pick himself up quickly to re-join the race in second.

Meanwhile Geerts was ahead on Horgmo, with the Kawasaki rider also being chased down by Van de Moosdijk. Horgmo got cross-rutted and went down and out of fourth place.

Geerts then set the fastest lap of the race as he looked to catch Vialle. At that point Vialle was also within touching distance of Längenfelder. The battle between the German and the Frenchman carried on for a few laps, with Vialle trying the same inside line on the wave section several times.

It looked like Vialle had a chance to go for the win but then crashed again which allowed Geerts through. Geerts then sought his own opportunity for a win but was unable to get it done and Längenfelder went on to win the race, the Grand Prix and claim the red plate.

Längenfelder will head to round two in Mantova with the red plate, as Vialle and Geerts sit second and third in the standings.

Simon Längenfelder: “I didn’t expect it. I was coming into this weekend trying to do my best and didn’t think about any positions but then in the qualifying race I felt good and had a good start. The riding was really good for me and also, I felt really good on the bike, so then today I had two really good starts, in the second race it was really tough to fight with Tom and Jago, they were really fast, and I was just trying to look forward. I’m really happy now to go home with the red plate.”

Tom Vialle: “I started good in race two and passed Simon early on in the race but then I made a small mistake and went down. I didn’t lose so much time and I could catch Simon again, but it was difficult to pass. I really pushed on the last lap but had a small crash just at the end. I really wanted to win but I will be ready for Mantova next week.”

Next up the FIM Motocross World Championship heads to Mantova for the MXGP of Lombardia!