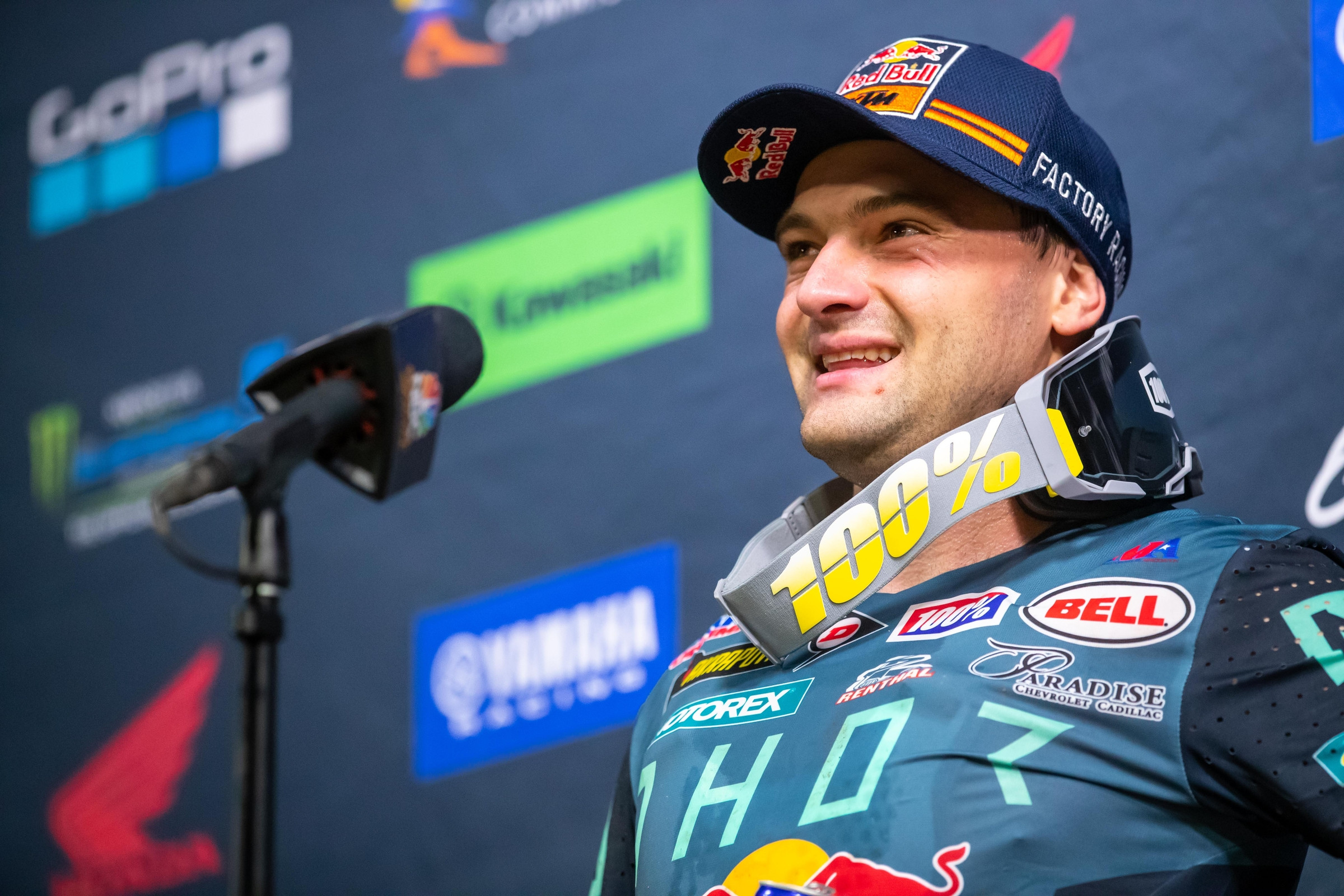 Red Bull KTM’s Cooper Webb saw his title defense on life support after hovering around the eighth-place spot the last few weekends in Monster Energy AMA Supercross. The move to the eastern-style tracks would provide perhaps his last gasp at a turn around, and things indeed moved in a better direction in Minneapolis with a second-place finish, remarkably just his second podium of the year. There’s still work to be done, as Webb could have easily have finished fourth had Malcolm Stewart and Chase Sexton not crashed, but he was closer to the lead pace, overall, regardless.

He talked about his difficult start to the season in the post-race press conference.

Cooper, how much did the switch to East Coast dirt help?
Cooper Webb: Yeah, it was a great night, much better than the last few, no doubt. Big step in the right direction. I liked the track, the ruts earlier in the day and then the main event was kind of a mix with the ruts, but it also hardened up a lot. I definitely gel with the East Coast, and it was good to get back to Florida where it felt more homey. Just cleared my head a bit. I’ve got to give it up to the team, they came up with a package that helped me quite a bit. Nice to be back [on the podium]. Had a few crashes [from others] and what not, but we were in the fight and went all the way which is really nice.

Would you say going east is that impactful on your program?
I wouldn’t say it’s that impactful but being from the East Coast it just feels more homey. Going back after crap results out west, clear head, new tracks, new people, at this level it all makes a difference.

Cooper, you mentioned some things changed this week, can you allude to what that was? Also how hard has it been to get a handle on this new bike than what you thought going into Anaheim 1?
Actually “The Man” came up with it, Roger De Coster. Rog went to work, I didn’t get to try it all week, I tried it today. It worked out a little better for me for sure. I felt better today. Our old bike, I gelled on it so well, I felt like it was built for me in supercross. This one, with a new bike you’re learning nonstop, and the conditions are ever changing. We race on so many soils and dirt. You think you get it right, then you go somewhere that’s different from your test track. It’s not from a lack of effort, but it’s been a struggle for me.

A lot happened out there. You led laps, you got shuffled back, Chase and Malcolm went down. How do you keep track of everything that is going on out there for the 20 minutes?
Yeah, It was a lot. I finally led some laps which felt really good. I could tell Chase was faster and probably getting impatient. Once he got around me, I put in a little fight, but I wanted to try to tuck in behind him, but then Jason was close, and he got me and I kind of got pounced on by all three guys. I just tried to stay cool calm and collected and follow. I feel like I was riding good laps behind Jason and Mookie. I made a push behind Mookie, and he went down. Then Chase went down. I felt solid throughout the whole main event, wish I could push a little harder at the five-to-12-minute mark, but overall, I can’t complain. I know what it’s like to go the distance, so we’ll see where that leads us.

The whoops seem to be a lot bigger this year. Do you think that’s been a factor in your comfort or is it just you searching for new settings with the new bike?
Yeah, the whoops have been tough this year no doubt. Especially the West Coast swing they’ve been built different this year. They’ve been getting tough. Even tonight, I did feel better in them throughout the day, the progress we made with the bike did help a lot, but we got to that survival line, if you will, just getting through it the best we could, so it’s hard to tell. They’ve been tough this year, a lot of laps on them with not a lot of maintenance, so it’s different better to be getting better with the bike and also myself.

And how do you analyze these results during the week? Do you look at yourself or do you just look at the new bike? I’m sure these have been some intense weeks.
Yeah, it’s not great. There’s a lot of pressure to perform, especially with the number-one plate, so when you’re riding around in eighth place, it’s not good. It’s been a battle, mentally, emotionally, it’s been a roller coaster. Just believing in myself and getting back to it and not quitting when things got hard, that’s what I’m pumped on. Round 7, anything can happen. At least I’m back in the front where I need to be.

Is it more of a relief to be back on the podium? How do you deal with the negativity? Does that effect you?
There’s a lot, man. There’s a lot of noise and it can really effect you, maybe it does maybe it doesn’t. You need to not doubt yourself and maybe I started to go down that road and second guess decisions. Like I said, I finally put the noise away and did it for myself this week. It’s tough, our sport is up and down and can throw a lot at you. Just never give up and keep fighting the whole way.

You’ve mentioned multiple times not giving up. We know how hard you push when your back is against the wall. What’s your take on trying to win this championship being 25 points down?
Obviously, it would take a lot for that to happen. But with that being said, just being up here is a lot of confidence and I feel like I’m the kind of guy that once I get that confidence I go pretty quickly to the next step. I believe, again, tonight about being up there and battling with the guys, with the bike we made good progress, my riding I made progress, starts were there. It’s stacked this year and there are a lot of good guys. As we’ve seen, the races have been tight. I still need to get better, but it’s never over. Just fighting to the end. Just get that first win of the season is the next step.