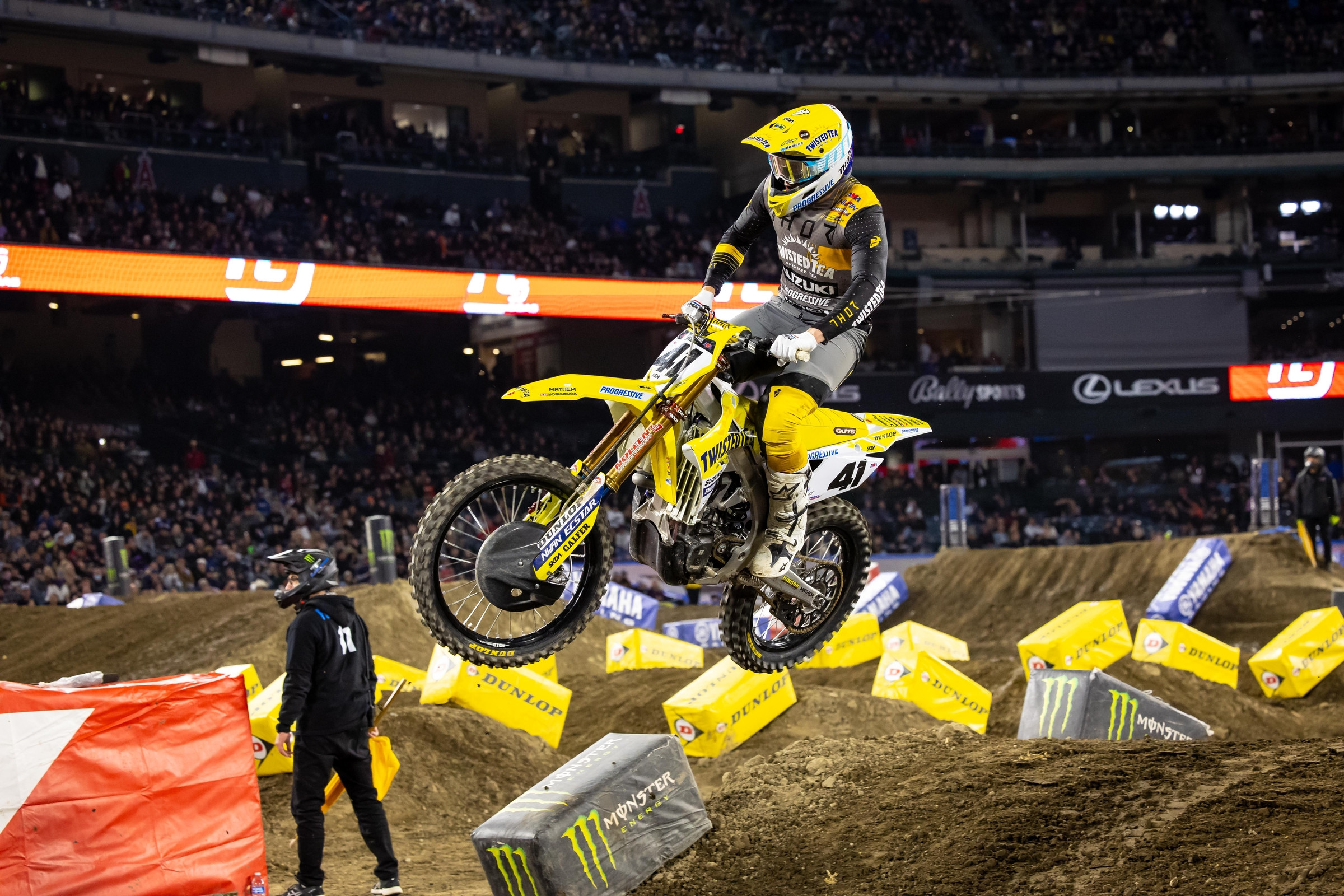 It has been an up and down start to the season for each rider on Twisted Tea/HEP Motorsports Suzuki. Brandon Hartranft has been trending upward since Anaheim 1 where he said he felt the least comfortable, but he’s been solid through four rounds and even added a career best 12th last weekend at Anaheim 2. Justin Bogle did not make the main at Anaheim 1, lost close friend Ryan Fedorow before round two, and then was disqualified at round three for contact with Justin Barcia as a lapper. Despite a very rough start to 2022 for Bogle, he’s keeping his head held high and came home 14th at Anaheim 2. As for Adam Enticknap, a rough block pass from Ryan Breece while in a transfer spot in the LCQ ended his best shot at making a main event in 2022. Despite that, he’s still making improvements and feels the main events are right around the corner. Prior to Anaheim 2 last week, we caught up with all three riders at press day to hear what they each had to say about their 2022 seasons thus far.

Racer X: Just kind of summarize your first three rounds for me. What do you feel like the first three have been like for you and are you happy with where you’re at?
Brandon Hartranft: Every round, I’ve just progressed each round honestly. I’ve finished 17th, 16th, 15th [and now 12th at Anaheim 2] so I guess you can see that I’m progressing. The first round was a little bit of a headache, the second round was much better, and then round three I was really starting to ride like myself. We still have quite a bit of racing left so I’m trying to be there at the end. I feel like I’m riding pretty good, but this class is pretty stacked so it’s tough. You’ve got to be on your A game every time you race with these boys. I’m definitely starting to show my potential and looking forward to each round.

In terms of goals then that you set for yourself coming into the season, do you feel like you’ve already hit some of those marks already?
A little bit, just because last year was such a headache. I mean, I still expect more out of myself, I think the team does too. But I’m just trying to be as good as I can every weekend but safe and make it all the way to round 17. There’s already two guys out so, yeah, I think the next few rounds I’m going to start really getting up there. I guess we’ll see.

Talking about bike setup or maybe even yourself, what kinds of things do you feel you’ve really improved on through these first few rounds?
Just confidence. Really the bike’s been pretty… I haven’t really touched the bike honestly! Maybe a little shock change but the bike has been really good, it’s just more of a mental state. So, every round I’ve been getting more confident and that’s the key to our sport.

Racer X: Let’s just wash away the first three rounds. How do you actually feel right now in terms of riding and everything?
Justin Bogle: I’ve felt better but I’ve damn sure felt worse. I didn’t get a whole lot of riding in pre-season; I was pretty honest about that even in the press conference. I didn’t even really come in prepared, which I hate having to say that stuff all the time but whatever. It is what it is. And then after Anaheim 1, I didn’t qualify and then I didn’t ride or train until this past week. So, it’s just been a roller coaster and a rough time for sure. Coming into Anaheim though, I actually rode this week and made some changes with the bike and the bike is getting better. I’m feeling more comfortable, and I have all the support in the world from my team which is incredible because I’ve done about as bad as you can do all things considered. So that’s keeping my positive and keeping me happy and excited to go racing and man I just know I still got something in there. You know what I mean? Because when I’m riding, I’m like, “I’m not washed up just yet!” [Laughs] I’ve just got to make something happen. It’s going to take a little time, that’s for sure. This class is tough man. At the front end of it, it’s very, very tough. So, you’ve got to be ready and unfortunately right now I’m just not really. But we’ll get there.

Talking about riding this week though, what kind of setting adjustments did you make and are you excited to try them in race conditions and see if you’ve made the right moves?
Yeah, I made some suspension changes and a couple chassis things, mostly with my shock and the rear end of the bike and it made a pretty big difference for me. So, I’m feeling good about that man. I was struggling in places on the track. Like the whoops have been really gnarly and I was just kind of scared going into them the first couple of rounds and now I’m feeling better and better. There’s no such thing as like a “fix all thing” but it is going to gradually get better you know. And trying to learn the bike and the team and everything and not having a full offseason of testing or prep, it’s just going to have to happen throughout the season and that’s fine. That’s just part of the game when you’re coming in behind the eight ball. But it’s good. They’re working hard man, and that’s an incredible thing to feel when they’re working as hard as I am. That’s all you can ask for.

So, moving forward and setting realistic goals, what are you trying to set for yourself? Where do you want to be? What do you want out of your riding?
Dude I just need to ride better and just be better. Get good starts and pretty much everything. I guess I can’t put a number on it because dude I don’t think I’ve scored a point yet! [Bogle did finish 14th at Anaheim 2] DNQ, DNF, DQ is not the start I was hoping for.

Hey but you maybe made history!
One way or another, I will make the history books. Come hell or high water, I’m getting in there! They’re not going to Pete Rose me! [Laughs]

Racer X: Three rounds into the season, I’m sure you would have wanted to make a main or two more, but how are you feeling about it so far this year?
Adam Enticknap: I wish I would have had that weekend back at Oakland. I think that would have made a big difference you know what I mean? But it is what it is, and shit happens. But onto A2, I like being here because it’s so close to home. It’s definitely my home race. This is where I would say my dreams came true racing here in Anaheim. This is where the dream was developed. As a kid, I watched Jeremy McGrath in these stadiums, and this is where it all came to. So, I’m excited for the weekend. I worked on a couple start techniques. Hopefully I can get out of the hole a little better, I think that’s just huge for supercross right now is just getting out front and putting in good laps quick. Everybody’s just so close in pace and they’re all fast and aggressive, it just makes a big difference being in that top five coming into the first corner. So, that’s my main focus for each weekend. Just trying to get better and better and you know I’m a brand-new dad which is just absolutely amazing. I couldn’t be happier. Little Adam’s all healthy and can’t ask for more than that. It was his first day at the track ever with dad this week which was definitely one of those moments I’ll probably never forget. I’m definitely going to be racing for him and hopefully wife and little man get to come this weekend. They’re just going to come for practice. He can’t really be out too much because he’s real fresh. I’ll definitely be racing for him this weekend and making sure he knows he can live his dreams when he gets older just like me.

Talking about being a dad, how has that maybe changed your motivation out there a little bit? Has it pushed you more on the track even?
It’s just different. It definitely gives you motivation to put food on the table, that’s for sure. You want to be home with them more and you want to ride really hard. I think the biggest thing is just managing your time and making sure you’re using every moment to your advantage. I think that’s a huge thing. Ever since we’ve had him, even in these last four weeks, I’ve definitely noticed that I’m picking and choosing and cutting things shorter so I’m just making sure my riding is more efficient. I think it’s just made me a better person to be honest. Trying to have better time management and spend the time where I want it to be spent.

Back to the riding side of it, you’d said you’ve been dialing in starts a little bit and wanting to get out of the hole a little better, is that the one problem area you feel is missing or is there a couple other things you’re still working on as well?
I would say that’s a big box, you know what I mean? That’s at the top of the list. Another problem area is just speed. You know, getting that intensity up quickly. But I think we all work on that. I think that’s a very mutually practiced thing is getting speed quickly. It’s just something that you can’t have enough of. Coming out of the gate and running fast laps fast is huge in our sport. It’s something that’s worked on for the guys in 40th through where I’m at and even Cooper Webb. He’s never been the guy that comes out and sprints real fast and it definitely hurts him. We’re all working on that. I’m trying to get better myself. Trying to get out of the hole, and hopefully we can get a couple of those stars to align.