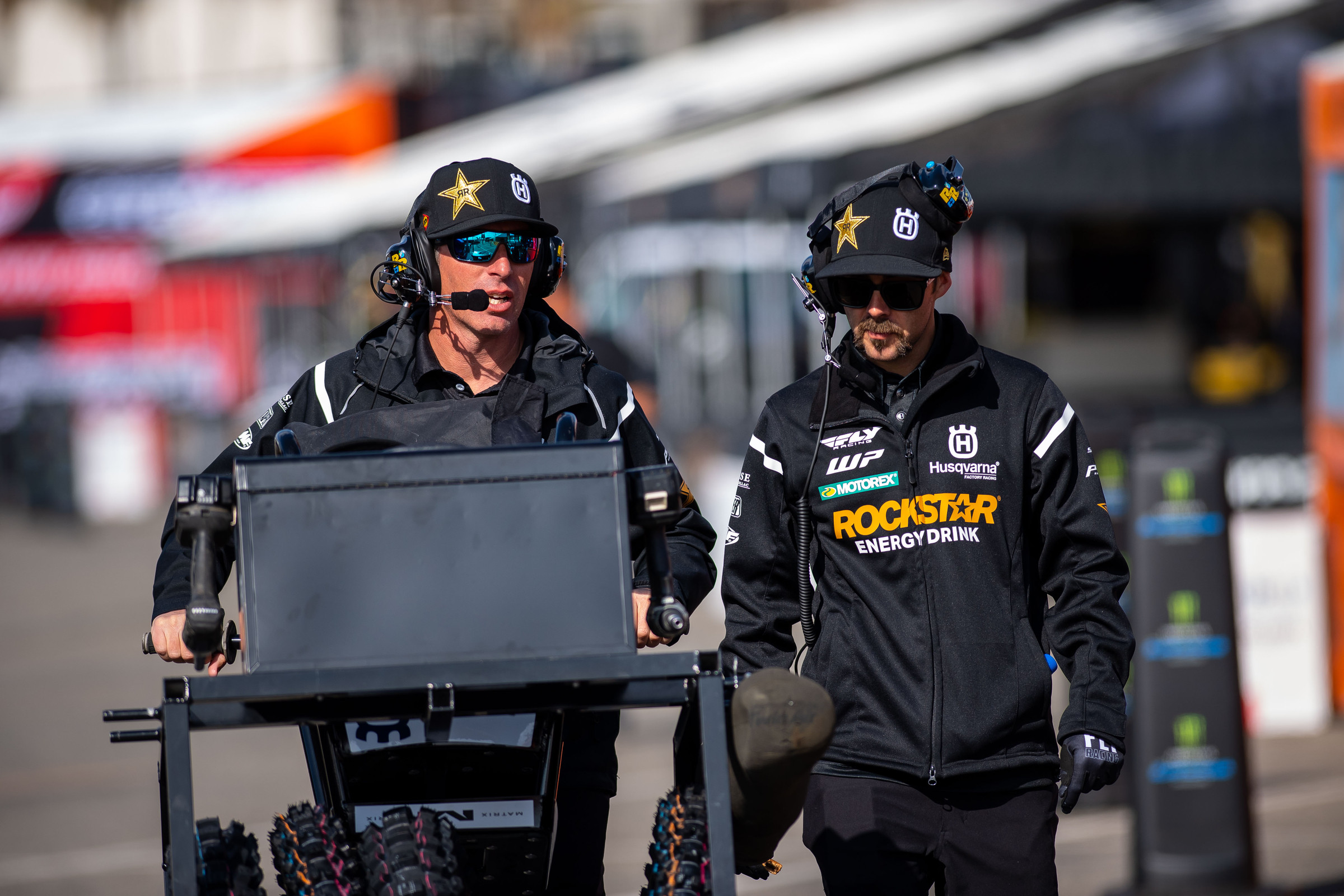 Only days before the season-opening Anaheim 1 Supercross, we got word that the Rockstar Energy Husqvarna team was going to need a new team manager as Steve Westfall announced that he was leaving. He’ll stick with the team for this month but “Scuba” (as he’s known in the pits) is calling it a day after a long career in the sport and a manager with one of the best teams in the pits. Last week on the PulpMX Show we caught up to Scuba to find out what happened, what’s next, and why he decided enough was enough.

Racer X Online: You’ve had a real successful run of championships and race wins over there. You got promoted to team manager a little while ago, and now announced you’re leaving. Take us through this decision. I was a mechanic for 12 years. I certainly understand the workload and everything, but things were rolling for you professionally-wise. What made this decision for you?
Steve Westfall: It was probably one of the toughest decisions I’ve ever had to make, honestly. Just family. I’ve always put everything else first and my kid’s getting older and stuff. It’s a lot of stress on myself. It just wasn’t fair to everybody around and involved. This is what I chose. I’m still going to help the team probably for the first month or so, help that transition over and still be there and still support the guys as much as I can. I’m just always a phone call away, at the end of the day. It was hard. I love the industry. We all started it at one point or another because we rode and raced. It’s hard.

I’m interested in the timing of it. Obviously, you ended the season last year and then this is fairly recent. Were you kind of burnt out at the nationals, but then things got better, and then you got into the grind and then you were like, I've really got to leave? It is sudden, a couple weeks before the first race.  Or were you close to doing it in September?
No. Exactly like you said. I was trying to work thought it. I got bad anxiety. I was trying to get through it and I just couldn’t. I was trying and then… It’s not fair to everybody else involved, honestly. I know the timing isn’t perfect. The timing is never perfect in racing. That’s why I’m trying to, in my mind, do the right thing and still try to help this transition, if that makes sense.

Was there a moment for you? Did something hit you at the shop or at the test track and you’re like, it’s time? Anything like that?
No. I was honestly trying to work through it. Like I said, it just wasn’t fair to everybody else involved. I know the timing wasn’t right, by any means. The overwhelming stuff from Instagram and Facebook and the messages, I’m blown away. I know I can be an asshole and a d***head. [Michael] Lindsey will attest to that one. I have a lot of passion for it. When you kind of lose it a little and you’re not sure and you’re trying to find it… Trust me, it was hard, because I had to call everybody.

You talked about your family. Your team is definitely your second family, especially when I look at your crew. There’s a lot of teams with a lot of staff turnover. You guys have very little. You guys have a real tight-knit group from the outside looking in. I can’t imagine any of those calls are easy when you’ve worked that long with so many of those guys.
No. Not at all. I broke down. I ain’t going to lie. That’s the hardest thing when you’ve got to tell those guys, and then trying to tell the riders and stuff. The older ones kind of understood. They were bummed. The older ones understood the most. The younger ones, it’s hard when a few of them are like your kids. Probably not the right thing to say with all of them that we have, but a couple of them are like my kids. Jalek [Swoll] being one. He’s been with me going on eight years now, a long time. Obviously, Timmy [Ferry] with Evan. I’ve known Evan since he was a little kid, watching him ride.

That’s tough. Again, the timing is not great, but like you said, if it’s not in your heart and you’re getting anxiety and all that, you’ve got to look after yourself.
Yeah. Kids are getting older now and stuff like that, so we’re going to move back east.

So, you’re going to go back to New York?
No, I’m going to go Georgia/Florida area. I haven’t quite figured it out. A buddy of ours passed away this past year and his wife and they have a couple kids and whatnot. Maybe head that way. They live in Georgia. Then Florida… I’ve gotten phone calls for jobs already, but I don't want to commit to anything. You don’t know. We’ll see.

When you say you have anxiety, I can feel it. You have this crew underneath you, these riders. It’s not an overstatement to say you have their lives in your hands. It’s so much work and so much stress that people don’t understand that. It is a great job. You get paid well and you get to do the coolest things, but sometimes it just worth it.
For sure. It’s so hard.

How did Roger [De Coster] and Ian [Harrison] take it? Did they try to talk you out of it?
Everybody was caught off guard with it, which obviously the whole industry was. They understood. Just the way the living is here in California and stuff, obviously being in New York isn’t much greater, but the cost of living is just through the roof and it just keeps going up. My wife stays home to take care of the kids and stuff and it’s just hard.

It wasn’t really known behind the scenes, but there were issues with ignitions and riders and bikes. I’ve been there. Our carburetors were falling off at Yamaha. I can remember the feeling in my stomach sometimes when shit went wrong at the test track for Chad, for Timmy, for Vuillemin. It’s just the worst feeling in the world, isn’t it?
Yeah. It’s gnarly.

You just can’t sleep.
No. Cannot sleep. Don’t understand why. Can’t figure it out. It’s crazy. I was working for [Kyle] Cunningham in amateurs when he was on the Yamaha. I remember racing at Glen Helen and all of a sudden he’s pushing his bike. I’m like, “What the hell?” Then a Yamaha guy comes up and he’s like, “You didn’t wire the carb on?” I’m like, “Wire the carb? What are you talking about?” He’s like, “I told you!” I’m like, “You never told me, because I promise that thing would have been wired on.”

You talked about getting some job offers and you’re going to take your time and sort through it. I understand that. Do you think you’ll be back in the sport on a lesser team, a lesser role, and a little bit less stress? Or do you see yourself kind of not going to supercross and motocross races for a while?
I’d say probably not going for a while. I don't know. There’s a couple things that are kind of up in the air. We’ll see. I’m definitely not going to Star. I have seen the posts that everybody’s thinking I’m going there, and Star’s hiring everybody. I just need to take time to think it through. I love the sport.

You had a really good run there, and before you were team manager, whether it was [Zach] Osborne, Jason Anderson, RJ [Hampshire], Jalek. Is there a couple moments that stand out for you as you’re talking about the team? There’s been a lot of success there. Are there a couple that stand out?
Probably one would be Zach’s first win ever. Comes at the ironic track that kind of eluded his career or ruined it.

Zach came back to America. It was a great story, but he had two so-so years at GEICO. It wasn’t like he was setting the world on fire. He was good but he wasn’t great. When he got on your team, your bike, with Aldon, he came on. It was a really cool story.
It was. It was awesome for him. Jason obviously winning the 450 championship was cool. Zach winning the outdoors. All of them, really. All the championships, those are the hardest to come by. To be able to have every championship in every discipline—East, West, outdoors, 250, supercross 450 and a motocross 450. You got them all.