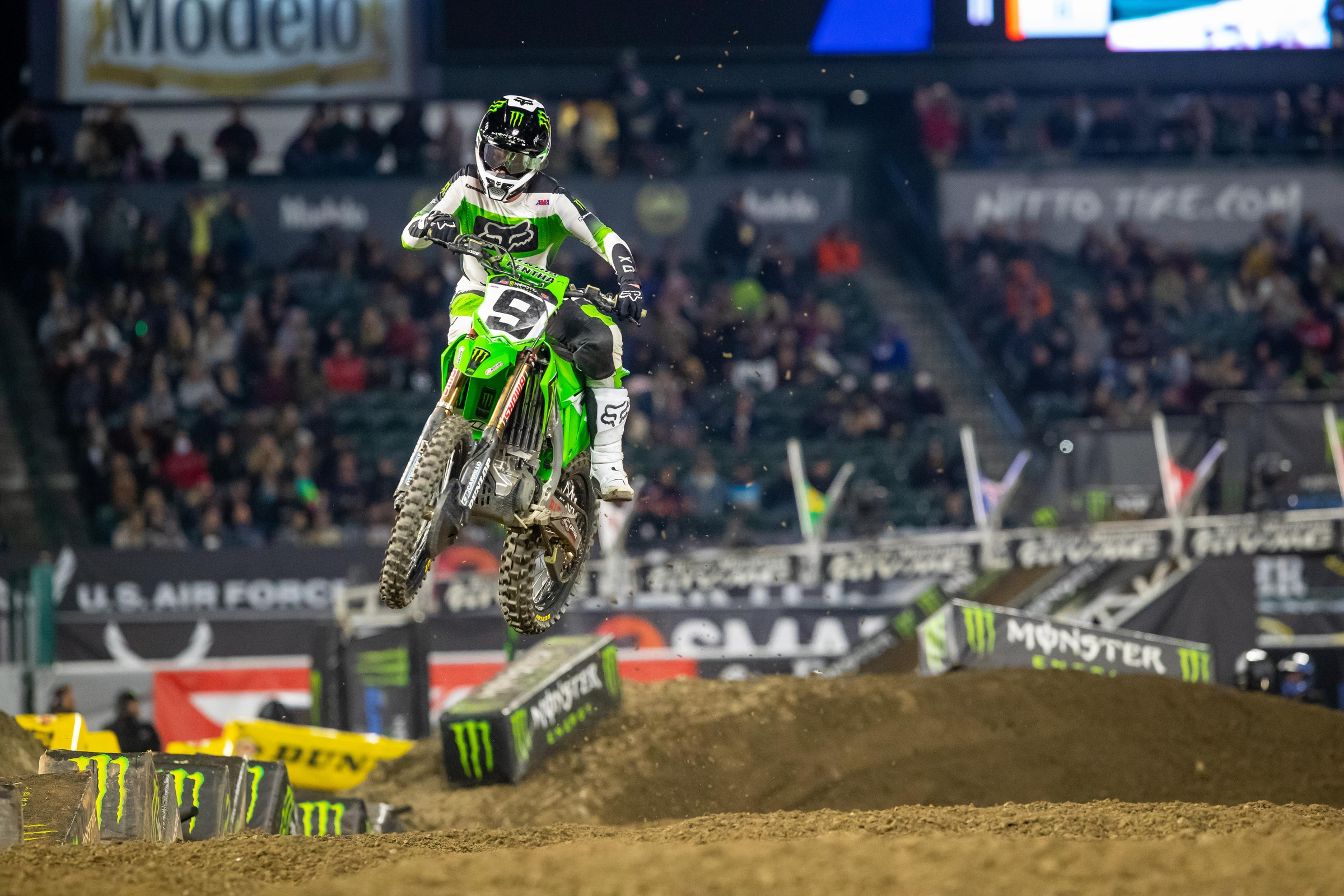 Opening night for Monster Energy Supercross offers up so many storylines. We’ll present three of them here with high-profile riders. Eli Tomac made his debut with Monster Energy/Star Yamaha Racing and took sixth. Adam Cianciarulo of Monster Energy Kawasaki showed up with a separated shoulder but held strong for most of the race before finally fading all the way back to 11th. Aaron Plessinger debuted with Red Bull KTM and struggled throughout practice (19th fastest overall!) but turned it into a ninth-place finish in the main event.

Steve Matthes caught up to Cianciarulo and Tomac after the race.

Adam Cianciarulo: From my perspective this is fantastic. I rode in a field like twice, the week before last week, and I was going about six miles an hour the whole time. I woke up Monday morning to go to the K1 test track and I was like “I don’t know how I’m going to do this.” Yeah. I hit the whoops like twice on Wednesday. Then I came here and the whoops were huge. First practice was a complete disaster. It was spongey, front end was pulling me all over the place, went into the tough blocks…it was a disaster. From then to now, I seriously feel like I won the lottery. Sounds dramatic but I don’t think I’ve ever exceeded my expectations so much. I swear to God! Any points at all, anything respectable…wow. I was running third for a long time and I was doubling the whoops! I was doubling the whoops!

It always is tough, you’re fighting that mental battle, because I love that atmosphere here. It’s electricity. You want to put your best foot forward. So that was the toughest thing, to get past that and just do what I could do. It wasn’t going to be good enough to win. It was tough…but I’m glad it’s over.

Maybe you learn something from this? You were just doing laps and running your pace. You were the tortoise and not the hair. So maybe once you heal up and get your normal Warp 9 speed back, you will know you don’t always have to be this balls out fast guy.
I understand from the outside looking in, I’m making similar mistakes over the course of my career, so maybe it looks like I’m not self-assessing. That couldn’t be further from the truth. You know me! I’m grinding every day trying to figure this stuff out. You’re changing things about you that were doing as a kid every day. People are like “Go see a sports psychologist.” It’s not that easy! I have grinded, especially this off season, every day to try to better myself since Millville. The same can be said all the time. That was where I shifted my mindset. I was struggling to wrap my head around getting 16th place. I was about to fall asleep in here before the night show because I was like, “I don’t work like that.” That’s not the mindset. That’s not someone who is going to win multiple championships. That’s not someone who is going to be consistently at the top of the sport. You have to make the best of it and you have to figure it out at all times. Nick and I talked about that. If you get 17th you get 17th but you learn something.

How long until you feel better?
I’m not sure. A week and a half ago I could not ride supercross. No chance in hell. Tonight I raced. If there was one set of whoops I probably get fifth. I don’t know. I’m probably not going to be up front for a few weeks. I’m just telling you how it is, I’m not making excuses or trying to control a narrative. If I just sucked, I’d tell you.

Eli sixth place, with that start I’ll guess you’ll take it? You rode well, but, that start….
I’d say I rode average. Lets call it average. The starts were not good at all. Gotta figure that out, and of course at the test track I think theyr’e fine. Out here I need to learn some things or do some things differently. So that’s it there. That was tough. It was the hardest Anaheim 1 tack we’ve ever had, by far. Had the two sets of whoops, and it was like East Coast dirt. None of that skating around on the hard pack, it was like little ruts, you land in ruts, that sort of feel. Tough track.

I thought you looked fantastic in the qualifying sessions. No round one rust at all. Did you feel that way?
Yes. Qualifying was awesome, and I feel good riding. Body position, I feel like I’m in a good place. I need to start better and tune up a few other spots, but overall I’ll be fine down the road.

I don’t know how much you were looking around, but guys where on the ground, guys were getting up, guys were going crazy. It was carnage out there. Did you get a sense of that?
Oh yeah! I saw everyone getting nuked in front of me.

You kind of stayed out of it.
[Laughs] Oh yeah. They were yelling at each other in the tunnels all day, it was just chaos. Typical Anaheim 1 drama! (Laughs)

Here’s what Plessinger had to say in a Red Bull KTM press release:

Aaron Plessinger: “It was a pretty rough day for me actually. I started out in Free Practice going down and then I went down in the first qualifying practice as well. I turned it around and ran some decent laps in the second qualifier but it wasn’t a very great position. I got a decent start in the heat race and ran in fourth pretty much the whole time. In the main, I didn't get a good start at all and I was back of the pack battling. About halfway through, I turned it up a little bit and made some passes up to ninth. Overall, I’m pumped to get through the first round healthy and we'll back at it in Oakland!"