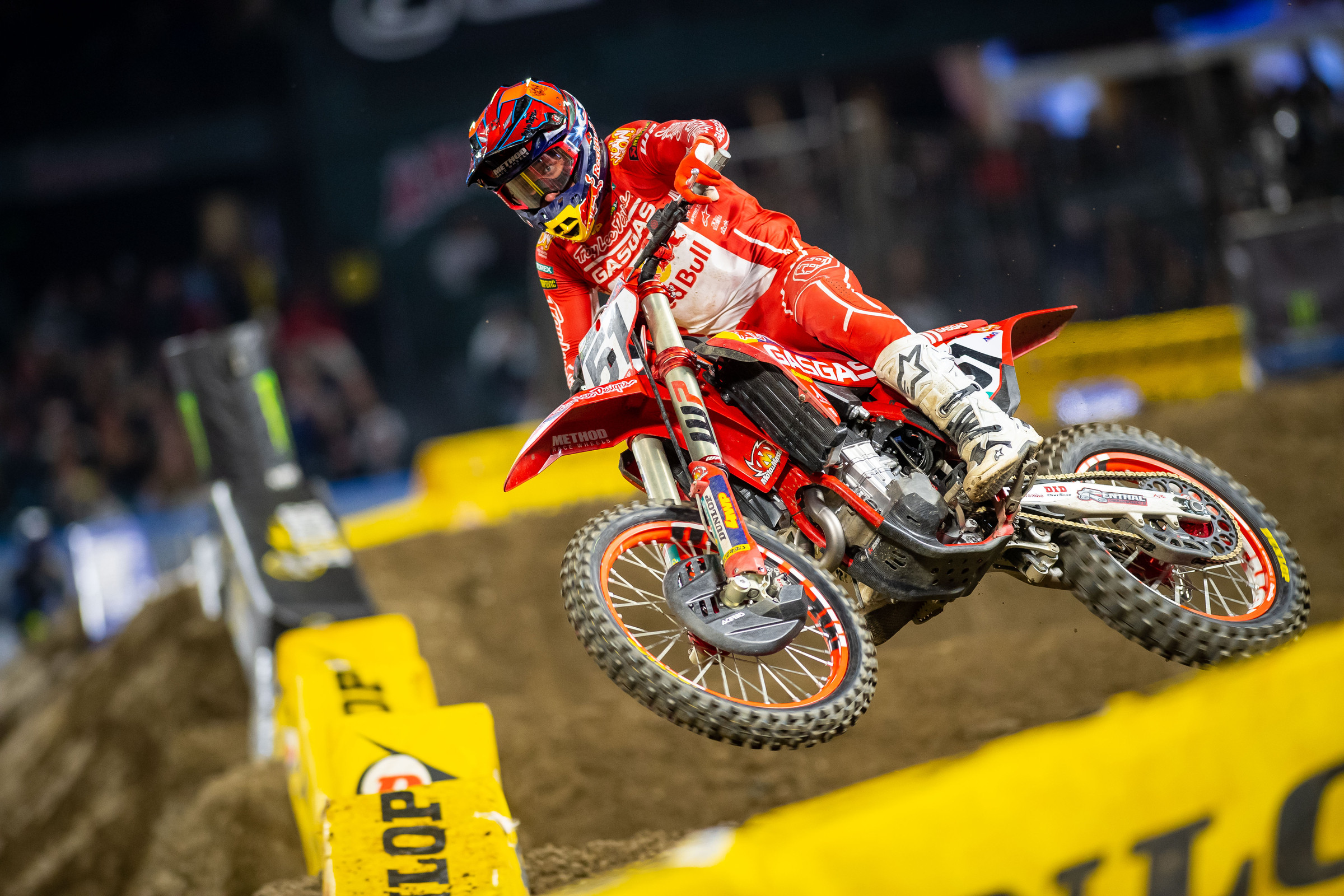 Justin Barcia has been right in the thick of the hype leading into Anaheim 1 given his three-straight opening round victories. He didn’t win this time, but he still found himself right in the battle and logged  a strong podium to kick off the season. Yes, there was some contact with Jason Anderson in a battle for second. After a wild race, Barcia spoke with the media about his day, the chaotic race itself, and his outlook on a 2022 title run.

Justin, you didn’t win the opening round this year, but you got on the podium, so a good result, nonetheless. How do you feel about it? You don’t have the red plate for round two, so a little bit less pressure I suppose at this point of the year.
Justin Barcia: Yeah, definitely. It feels great. I’m very happy where I’m at right now. It was a wild night of racing. It was definitely tricky, like you guys said. Then kind of survival mode toward the end. I wasn’t happy when Cooper got around me, but I was able to catch onto his lines. I was just trying to jump stuff stupid. I needed to tighten the track up a little and do some smarter lines, so that helped a lot. Got a little tight in the middle there. All in all, it feels amazing to be on the podium. Obviously didn’t get the four-peat. Everyone was going on about that, but it feels really good to have that off my shoulders now. I’m just looking forward to the season. The team has done a really good job. I’m enjoying riding with Michael [Mosiman] and Pierce [Brown] and training with Wil [Hahn]. It’s just been really enjoyable and fun. It was a great night. I’m really happy with it.

As we alluded to earlier, it was a very kind of crazy night through the midfield with racing. You at one point were catching guys, and then you had people catching you and crashing in front of you. There was kind of just chaos everywhere. How difficult was it mentally to stay focused on yourself and make sure you’re hitting all of your marks with all the chaos going around?
I’m actually quite happy with myself how I managed the race. I had pressure on me pretty much the whole race. I wasn’t the fastest guy. Jason [Anderson] got around me, and then I was able to get him back, which was good, and just focus on myself. The whole race it was a lot of pressure, but usually I’m able to handle that quite well. I was able to keep my head on straight. With that track, it was definitely one of the more wicked ones for the first one, like the guys said. The whoops were steep. It was slippery. There were tight spots and open spots. They threw it at us, for sure. It made for some great racing. I’m just glad I kept it on two wheels, am healthy, and on the podium. Looking forward to the rest of the season.

The pass on Jason Anderson. Let’s get your side of it, your viewpoint on it. There’s always two sides to every story. I want to hear what you’ve got to say.
It was a great racing pass. I didn’t hit him too hard. We barely touched. I went on with my way. I think obviously he probably would have liked to cover that line better, but the way the ruts were I don't think he was able to do that. I set myself up in that corner where he passed me better for the next section and I was able to stick that. Honestly, he probably would have got me if I didn’t get that spot there because he was riding a lot better than me. So, I had to go for it early. I’m stoked on a good racing pass. All the passes today were great racing passes. I always go for it. I think those were all wicked good passes. I hope the season keeps like that. We all respect each other a lot and I won’t carry anything from this. Hopefully the other guys won’t.

Did [Jason] Anderson talk to you in the pits at all? I’m assuming not.
No. I just came straight here. I would hope he wouldn’t because there’s nothing to talk about. Obviously, you guys are trying to make a story out of it. I respect that. It was a great pass. I don't think he’s the type of the guy that’s going… I don't know where he’s at mentally, but I don't think he is. If he watches it, he’ll know that’s a racing pass. So, no worries there.

I don't know if it’s a story necessarily on that. It’s probably more of a story on just the aggression of the night. It wasn’t just you two. Mookie got it pretty good with another rider. We saw a lot of hard crashes in the 250 class. Was that just the nature of the track, or just the nature of coming back to racing?
It was a technical track as in there were so many ruts and they kept cutting down, cutting down, cutting down. You had to make passes and be fairly aggressive. So, I’m sure that’s why there was a lot of aggressive racing. We’ve all been thinking about racing for a while, so you’ve got a lot of testosterone going and stuff and just want to go out there and send it. It’s going to be a fun year racing with the boys. I look forward to it. It was great racing tonight.

The last few years you came out swinging, got the opening win, but then later on in the season kind of fizzled out. Does getting third tonight kind of set you up a little bit better, less pressure and give you more to work for later on in the season?
Yeah, definitely. I’m stoked on my result tonight. Obviously, you always want to win. That would be sick. Someone’s got to win. Kenny [Roczen] did it tonight. Coop’s [Cooper Webb] second. I was third. I’m racing against the best guys in the world, so I’m super happy with the podium position. I feel like I’m in a great place. Second year on the team. It feels really good. I’m really at home with them. I’m comfortable. We’re just going to keep chipping away at it, shoot for podiums, obviously go for wins and have fun. Definitely my goal is to be in the fight all year long. That was my goal last year and I think I came up a little bit short on that. So, this year the focus is just being smart, having great races, putting myself in good positions, and going for it.