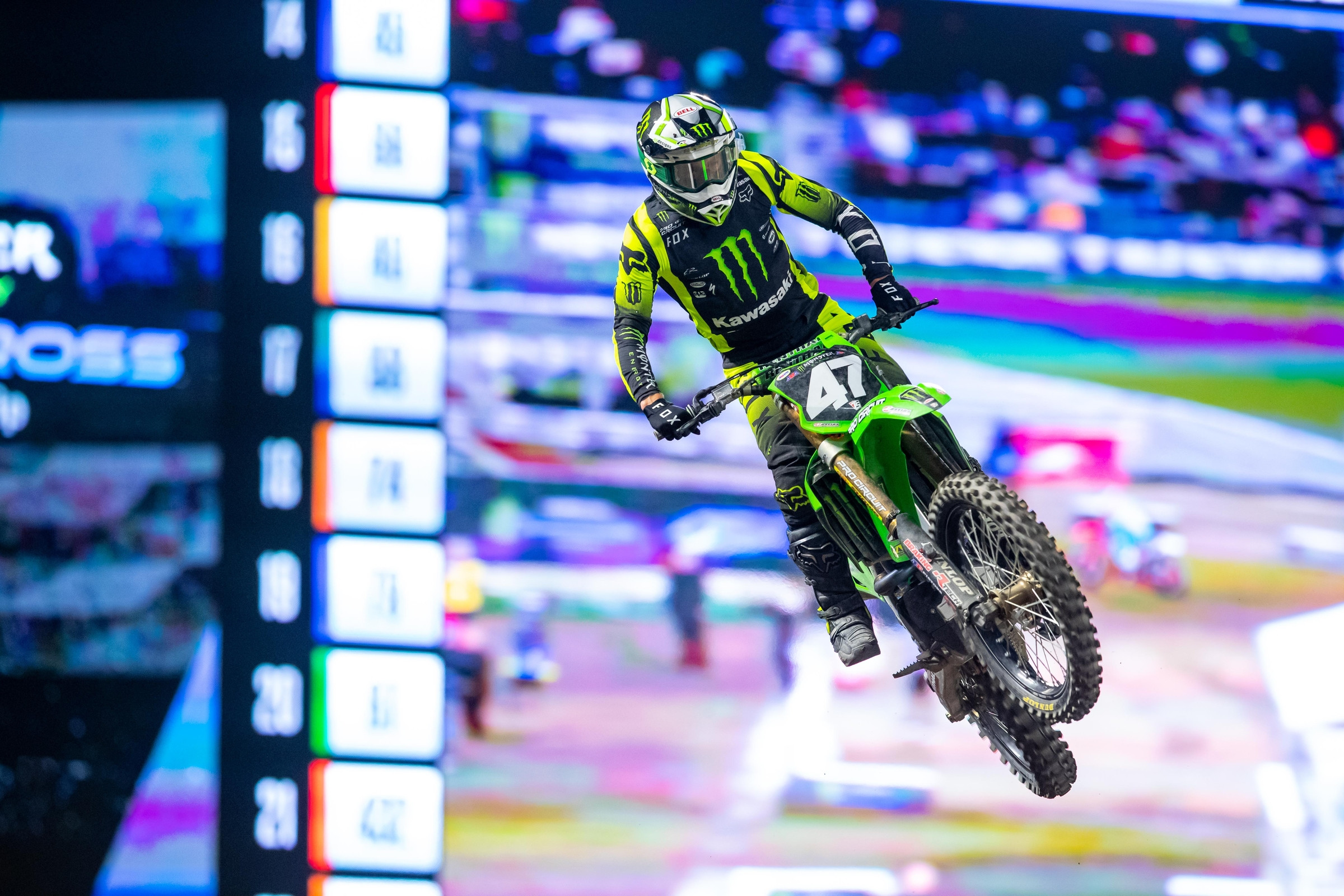 At the 2022 season-opening round of Monster Energy AMA Supercross, Monster Energy/Pro Circuit Kawasaki’s Seth Hammaker and Honda HRC’s Hunter Lawrence found themselves battling over second place in the final turn. How they got to that position was totally different: Hammaker started second behind Vince Friese, although he got passed by eventual race winner Christian Craig. On the other hand, Lawrence did not hit the gate as several riders did, but he was sleeping when it dropped, basically going into the first turn fourth from last. He fought the entire main event, salvaging points and made his way into a podium position when he passed Muc-Off/FXR/ClubMX Yamaha’s Garrett Marchbanks on the last lap. Lawrence then went after Hammaker in the final turn, but the Pennsylvania native held on to claim second as the Australian settled for third. After the race, the duo spoke with the media in the press conference about their respective nights.

Seth, explain that last lap. After you crossed the finish line, it looked like you were in some sort of pain. Were you just tired? What happened there at the final corner and then after the finish?
Seth Hammaker: The final corner, Hunter came in and I kind of got a little cross-rutted coming up that three before the finish. I didn’t even mean to jump the triple, and I over-jumped it. I kind of went nose first into the landing of the triple. Then I hit my chest on the cross bar and knocked the wind out of myself, so I was trying to get my breath back. That was a gnarly finish. Glad I was able to hang onto it.

It looked like in the whoops they were starting to get cupped out and you were having some big moments. Did you ever think about switching to the jump line? There were some points where I think we seen your number plate more than once.
It was a couple sketchy rides through the whoops at the end there. I tried the jump line early, and I just couldn’t get a good rhythm down in the whoops jumping them, so I just kind of stuck to skimming them. Christian [Craig] passed me early while I was trying to jump in the first set after the finish. In the beginning of the race, I was skimming them fairly well for the most part, and then had a few bad runs through the whoops. A couple things to clean up, to work on. Other than that, just kind of work on what we can this week and come back stronger in that area next weekend and for the future rounds.

Hunter, you were a little bit buried in the pack at the start of that 250 main event and the chaos that unfolded. What was it like to sit through that, kind of plot for those 15 minutes and a lap to see where you were going to end up, and then to have things come together in those last few laps the way it did?
Hunter Lawrence: My start was pretty bad. The gate flinched a bunch of times and, like, seven guys hit the gate. So, I thought it was going to be like a restart because it didn’t drop when it first moved. Then it didn’t. So, I thought, let’s go race. It wasn’t easy, but just pretty much just kept passing guys until there’s none in front of you. The case was third tonight, so it’s okay.

With the night that we had with just so many guys having crashes, just the chaos of the LCQ’s where factory guys aren’t even making it in in the 450 class, does that weigh on your mind at all while you’re racing? Or is it just once the gate drops it’s time to send it?
I don't think it’s like send it, in a way. You’ve got to do the best to your ability but try and ride within your limits if you can. obviously, you have to go above sometimes, but it’s never good to see guys get hurt. I’m just focused on myself.

You were the sort of lead Lawrence in GP’s, but whenever you all came to America Jett has kind of taken over that with you getting injuries. I feel like you’ve been a little bit undervalued a little bit. I know you had a solid, good season last year, second and third in the championship. But I feel you have more potential, maybe more potential than others realize, fans and stuff, because they haven’t seen you at your full health. Do you feel that with a ride like tonight coming through the pack that you’re approaching your full potential and America will start to see the full potential of Hunter Lawrence?
Yeah, for sure. It was only third tonight, so nothing to jump up and down about. But I feel good. There’s a lot of rounds to come. We’ll just keep doing my thing and working hard week in and week out and see how we go. It doesn’t really bother me if people think Jett’s better or whatever.

We heard earlier from Seth on that last lap, wish we could have had Garrett do this because this would have been epic to have the three of you talk about it because that was a wild last lap. Let’s hear your perspective. Come two to go, you were three and a half seconds back. So not only did you close that gap and seal a podium spot, but you knocked Garrett off as well and had that tight fight with Seth over that finish jump. Just walk us through that last lap.
It was kind of a “Hail Mary” last lap, to be honest. A little sketchy. I landed on a few Tuff Blox. I didn’t knock Garrett off. I passed him clean. I probably could have dive-bombed Seth a little harder, but I thought that was probably crossing the limits and not necessary. I just gave it my all. In all honesty, I knew I was closing and just really pushed those last laps. I knew I was fitter and stronger. That’s all it was. I was just going with it.

When you say, “Hail Mary,” in your mind, did you just tell yourself podium or nothing? Or was it you wanted to catch those guys and see what happens?
They’re just right there. It’s so close, so why not go for it? it’s not really rolling the dice, because everything we do is a calculated risk. It was so close. You’d be like a p***y to just settle for fourth or whatever. So, go for it.