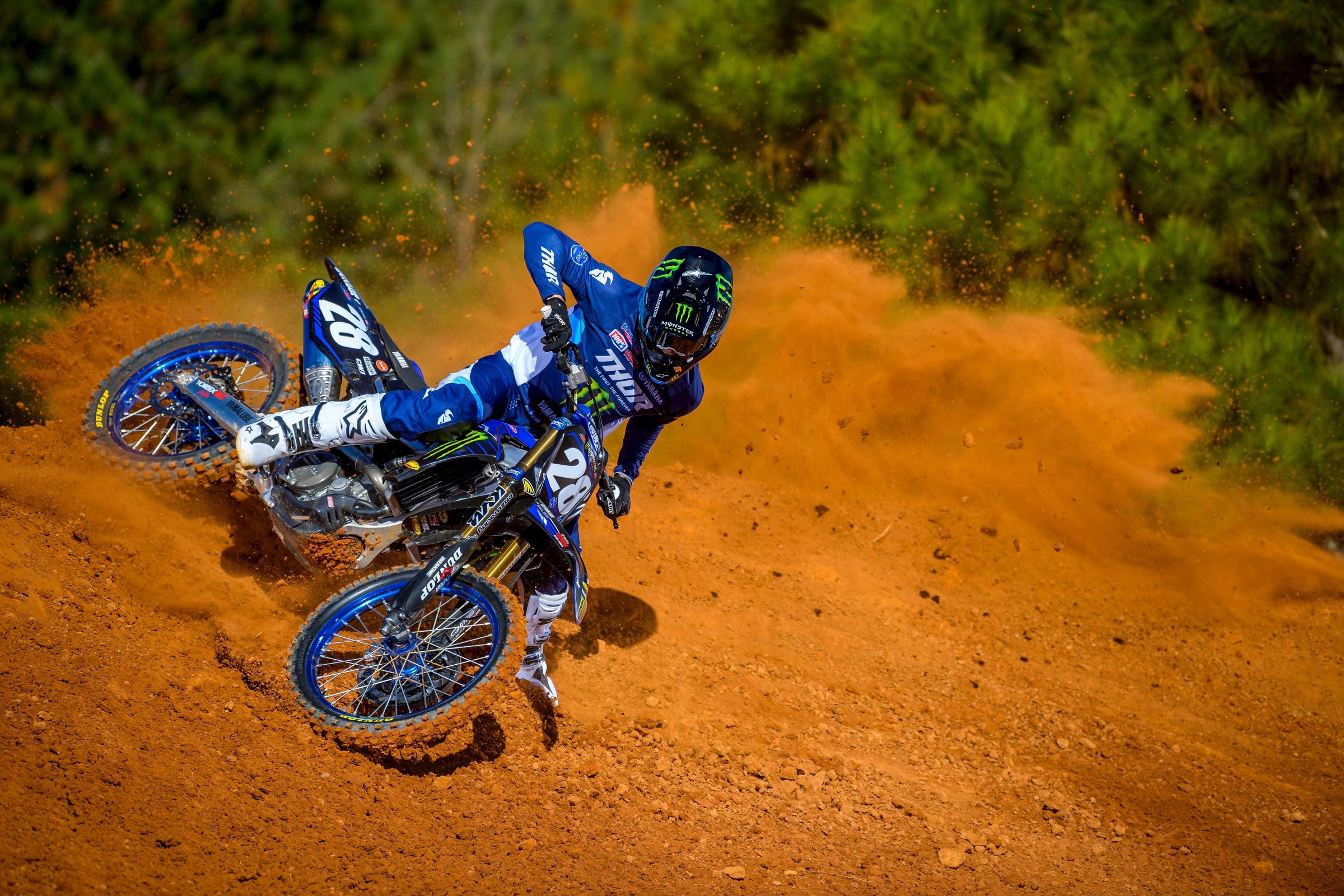 At the opening round of the 2021 Lucas Oil AMA Pro Motocross Championship at the Fox Raceway 1 National in Southern California, the Monster Energy/Star Yamaha Racing team let the world know that team rider Christian Craig would return to the team in 2022. It was announced that, just as he did in 2021, Craig would once again be competing in the 250SX class of the Monster Energy AMA Supercross as well as the 450 Class of Pro Motocross. Having won the opening round of the 2021 250SX East Region in Houston, Craig held steady and displayed excellent consistency in winning again in Indianapolis as well as landing on the podium six total times before suffering a fractured fibula and ankle sprain at the Salt Lake City 1 Supercross. In a desperate attempt to try and fight with teammate Colt Nichols for the 250SX East title, the Southern California native tied to line up at race in Utah, but it just wasn’t meant to be.

Forging onward, Craig hopped on the 450 for the summer’s Pro Motocross championship brawl and wound down the year with an impressive sixth overall in the premier class standings. Now it is December of 2021 and the new Monster Energy AMA Supercross season beckons. Poised to ride the 250cc motorcycle one more season in the football and baseball stadium of this nation, Craig has been back in his new home of Tallahassee, Florida, and bashing out countless laps and motos with his Monster Energy/Star Yamaha Racing teammates. Determined to win an AMA 250cc title before graduating full-time to the 450cc classification, Craig has been a man on a mission and over the weekend, we spoke with him.

Racer X: Hey, Christian. Thanks for taking the time to talk with us this hectic week leading right up to Christmas. You and the family all good?
Christian Craig: Yes. Everything is good. Yes, with the kids we have one that is age seven, one is three and we have a newborn at six weeks old. It’s a lot but it has been fun, and we enjoy it. We just got the kids to bed and we’re chilling now. All good.

You guys are now officially living in Florida, huh?
Yeah, we’re in Florida. We had to move here since the whole team did, so we’re in Tallahassee. It’s been a big, big change for me. I grew up in California. I was born and raised there and that’s pretty much all I’ve known. I’ve traveled around racing, but never been based out of another state, so it’s been a big change for our family. It’s a good change and I think we needed this. It gets me out of my comfort zone and will help get me to that next level that I’m looking for.

I did an interview with you much earlier in the year and you said to me, “I know lining up that I’ll be confident in my bike, my trainer and just everything. I feel like I’m kind of at the later stage of my career, but I still have that fire underneath me and I still feel like I’m learning and growing and getting faster and getting better each year.” All of that really rings true going into 2022?
Yeah, I mean some people are like, “Are you sure you want to pack up everything and take your whole family and move everything to Florida?” I sold my house in California and we bought a house out here in Tallahassee and I’m all-in. I’m with my trainer Gareth Swanepoel and I really want to get a championship before I move up to the 450cc class full-time. I think win or lose, 2022 will be my final year in the 250 class and I want to go out with a bang, for sure.

Through your performance in the 2021 250SX East Region you appeared to up your game with both consistency and podium finishes. You were an absolute contender for that title before you got hurt at Salt Lake. Do you feel like you raised your game last season?
Yeah, for sure. My first year with the team, it went good. I started off with a win in Houston and then a few races later at Indianapolis 3 I won again. I battled to the end with my teammate Colt Nichols and unfortunately it all got cut short with the practice crash I had at Salt Lake. I think I proved to myself and everyone that I can run for a championship and I can have the red plate and be a contender. I think all of that was a huge confidence booster for me to have the red plate and to be able to battle down right to the end. Unfortunately, I got hurt, but yeah, it was a good year and I fully believe that I’m capable of doing it again.

What did you make of your 450cc outdoor season? You paced a fighting sixth overall in the points and closed strong with two top five finishes at the season closing Fox Raceway 2 and Hangtown rounds.
It was good. I got thrown into it after the Salt Lake crash. I came back into it and didn’t have a lot of time until the first round, so at each round I got a little bit better. If you look at my results, they kind of improved over the summer and by the end of the series I reeled off two top five finishes. It helps me hopefully get a full-time 450 ride next year, but it looks like I’ll be doing the same thing. I’ll be doing 250 indoor and 450 outdoor in 2022. I’m excited. Obviously, [Eli] Tomac is on the team now and that’s going to raise up everyone’s level. I’m excited to do all of that over the summertime.

The competition is going to be stiff come this new season, isn’t it?
For sure. I mean you can’t run away from it and here on the team, we all ride at the same place. I’ve done motos with everyone on the team now, you now? Tomac has jumped in on motos with us and it’s been good. It’s fun. It brings me to a new level. It challenges you and that’s what I look for every day. I look for something to challenge me to try and get better.

You really wanted to line-up and to try and race at Salt Lake to keep your title hope alive, didn’t you? I remember one Instagram post in which you posted a photo of your damaged ankle and just wrote, “WE TRIED.”
Yeah, I mean I was eight points down with two rounds left, so I had to give it a shot, you know? I lined up just to see if I could even do it and unfortunately, I couldn’t, but I had to try. It sucks that I had to go out that way. I wanted to see how it would play out. It was eight points with two rounds left and you never know what could have happened. If I could have put a little pressure on Colt it might have come right down to the wire. That stuff happens. Injuries happen and there is always next year.

These races are hard to win. All of you guys, regardless of if it is the 250cc or 450cc classification, have to fight for you lives to try and win these races. Only one guy gets to win, you know?
For sure. My last win before this 2021 season was in 2016, so I kind of went on a dry spell of five years of kind of up-and-down results and finally getting my win this year to start off the season, it was just a big relief. It was a relief knowing that I was capable of still doing it and still able to win and be up front. I mean this sport is full of ups-and-downs. Unfortunately, there are a lot of downs. Like you said, only one guy can win on any given night and all that you can do is put your best foot forward and try to do your best each night.

Hey, how do you like juggling the 450 and 250 during a racing season? Not many professional racers do that.
I don’t mind it. Whenever I do ride the 450, I’m on it full-time. When I’m on the 250, I’m on that bike full-time. It’s never really back-and-forth. I’m doing each season like that, and I spend a lot of time on each bike, so I enjoy doing both. I test a lot on both bikes and the 250 obviously pulls me around with no problem on the supercross track. The 450 is always awesome outdoors. I enjoy doing that stuff.

Big question: Do you have a preference between competing in the East Region or West Region come the start of the 2022 supercross season?
Well, obviously I was born and raised in California, so I think there are three rounds at Anaheim this year. It would be cool for me to do West, but I don’t make the call. That’s the boss’ decision and the end of the day and all I can do is be ready for either coast. I think I am ready as of now and hopefully they tell me I could be at round one. Either way, I think I’m going to be ready.

Man, the Monster Energy/Star Yamaha organization has really turned into a formidable entry at every level of the sport now. On all levels, the race team can win on any given Saturday night in a football stadium or Saturday afternoon on a national track. Power in numbers.
Yeah, I mean it’s awesome. It’s a winning formula. I feel like we’ve had almost every championship this year, so that says something to the program, the bike, and just everything around it all. Everyone believes in the program and what we are doing here, so I’m all-in obviously. I’m here full-time in Florida. I’m at the compound every day and I enjoy it and I love doing this. Hopefully I can earn a 450 ride with this team and stay on here.

How is it doing motos with all of your teammates most every day? Does everyone get along okay?
Yeah, most of the time. I mean there is always going to be some tension with some guys. You always want to be the best at the track every day. Most of the time we joke around and have fun. Me and Justin Cooper have been battling every day at the practice track. We push each other and we respect it. It has been good. Every day you have to bring you’re A game. I think that shows in our program on race day.

To Christian Craig’s masterplan, just what are you hoping to achieve during the 2022 racing season?
Obviously the big goal is to have a championship, but I think just to be at every round and to be up front. I want to put myself in a good spot and let the rest play out. I think all I can do is control that situation and as long as I do that, I think that by the end of the series I can be with the red plate or close to it. I think I proved to a lot of people and myself that I’ve done that and now is the time to close it up.