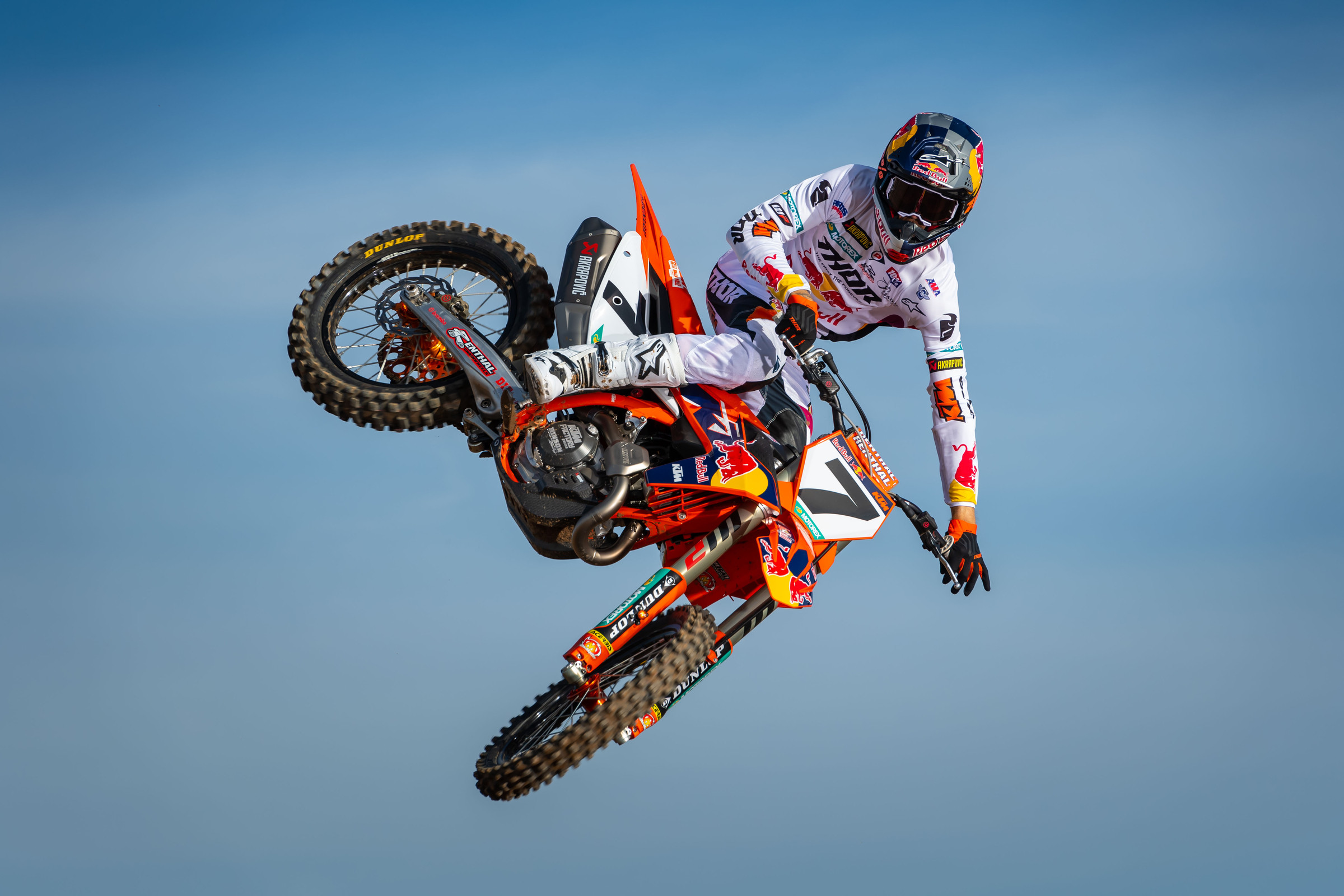 The smile that always lights up Aaron Plessinger’s face seemed a little bit bigger and brighter at the 2022 Red Bull KTM team intro last week. For Plessinger, he jumped from nothing but Yamahas his whole professional career right onto a brand-new Factory Edition KTM this off-season and it sounds like so far, so good. It’s been over two months now that Plessinger has had to learn the new machine, new team, new trainer with Aldon Baker, and new teammates of Cooper Webb, Marvin Musquin, and Max Vohland. The always happy go lucky Plessinger doesn’t look like this massive movement in his career has changed his demeanor at all and now with a fresh program, the former 250 Class champion is hungry for success in 2022.

Racer X: How does it feel? It’s a whole new vibe. It’s a whole new team. It’s a whole new everything for you. But you’ve had a little bit of time to digest it now. You’ve had kind of a few months of it where it’s like just your own thing, too, because you haven’t been publicly riding the bike or on social media or anything like that. So, now that you’ve had these couple months with the team, what do you think?
Aaron Plessinger: Dude, it’s awesome. These guys have welcomed me with open arms, and I can’t be more thankful. They made the transition so, so easy. From having Coop as a teammate again, to having [Roger] De Coster be team manager and Ian Harrison, making everything just mesh together easily. It’s awesome. Not to mention the bike. It’s unbelievable. So easy to ride. I think we’re in for a good season this year. It’s going to be fun, for sure.

Talking about the new bike, was it a little worrisome to you when you signed the deal with the team and they tell you the new bike is coming, that it’s like a whole new thing to learn with the team as they’re learning it as well? Or was it kind of nice to know that you’re coming in basically with a fresh slate and you don’t have to learn an old bike before a new bike comes next year, for example?
I came into it with the mindset of I’m not going to be alone learning this bike. Everybody is going to be with me, and we can kind of grow together and learn everything together. It’s not just me trying to learn one bike and they already know what setting here and there, and me trying to learn it alone. We’re together and we’re learning stuff each day on the bike. I think that was a lot of help, just being with these guys learning it together and not being alone.

Was it a little scary though, too? You had figured it out a little bit with the Yamaha program this past year. In your mind you’re probably thinking you could stay there and keep growing as you were, but then you take this leap here to jump to this new team. How much of that weighed on your mind when you were making this decision? Like, I’m in a groove right now – I don't know if I want to change it.
Yeah. There was long nights thinking about that. It was definitely one of the hardest decisions I’ve ever made. I was definitely nervous just switching bikes, especially because I did come from a really, really good season, one of my best seasons yet. It kind of confused me a little bit, but in the back of my mind, I was looking at Coop and just being like, he came from the same place I was and look what he has done. He’s now two-times supercross champion. It made it a little bit easier on me, just being that he’s here too. He was my teammate. To get to be teammates with him again is a dream come true, for sure.

You are in a weird spot too where you had very similar accolades to what Cooper had when he came to this team. A couple podiums, ran up front, been in the mix but never quite sealed the deal. Obviously, it’s worked out well for him. Is the sky the limit for you? Are you like, “This could take off and I could do what he did,” or are you trying to stay grounded and measured and be one step at a time and just put one foot in front of the other right now?
To say I’m not wishing what happened to him happens to me, I would be lying. I definitely want that to happen. I think I got all the things in order to make it happen. My training schedule is on point. Riding schedule is on point. I got the best team behind me. Everybody is saying I’m looking really, really good so far. Only time will tell. The possibilities are endless. I’m looking to really win a lot of races this year and be up on the podium a lot and hopefully get a taste of that red plate, for sure.

Talk about the training a little bit too because now you’ve worked with Aldon [Baker] a little bit. You’ve got a little taste of what he’s doing and what he’s capable of down there. How does it feel so far?
It feels great. It’s not what I thought it would be as far as I don't know if he has changed anything with me this year, but everybody says it’s super, super gnarly and just a lot, a lot of work. I think it’s going smooth so far. I think it’s going to be a really good season. I think I’m somewhat in better shape than I have been. We’ve got a month left, so I’m looking to be in the best shape I have been in ever to start the season. It’s going to be good.

There’s been some people that thought you’d come here, and they’d change you and you’d cut the hair and the mustache and going to Aldon would be maybe a little bit harder, more intense. Clearly, you do the work. No one thinks that you don’t, but how surprising has it been for you to see you’re coming into this more buttoned-up program, you’re going to a more buttoned-up trainer with Aldon, that so far everything is as smooth as it’s been?
It’s gone the best I could imagine. With these guys really embracing my personality and then Aldon, too. He’s embraced every bit of it. He hasn’t told me once to cut my hair yet. He says I could use a trim every now and then. He’s really embraced it. I think they like my happy-go-lucky personality. I think these guys kind of get looked at as really, really corporate just because they haven’t really had a guy with my kind of personality be a part of the team and they haven’t really been able to show what they’re really about. I’m lucky to have these guys really embrace me. I think it’s going to continue throughout the year and you’re going to see a lot different orange truck, a lot more fun orange truck for sure.

Last one and a more farfetched question, but RedBud is going to host the Motocross of Nations in 2022. You probably want a little bit of redemption from what happened in 2018, I’m sure. You’re kind of RedBud’s mascot. You’re Captain America, in a sense. How much would it mean to you if you have this great season to end up on the U.S. Des Nations and go out there at RedBud again with those USA colors?
Dude. That would put the icing on the cake, for sure. To get to have redemption over there and to get to really race those guys all on this orange machine and to hold nothing back would be unreal. I would love to do that. Who’s to say I don’t dye this mullet red, white, and blue and put some stars on the sides of my head? To get to race that race would be another dream come true. A lot of dreams coming true. I want to do it. I think I’ve got the capability to do it. Hopefully we’ll see some red, white, and blue graphics on the bike at the end of this year.