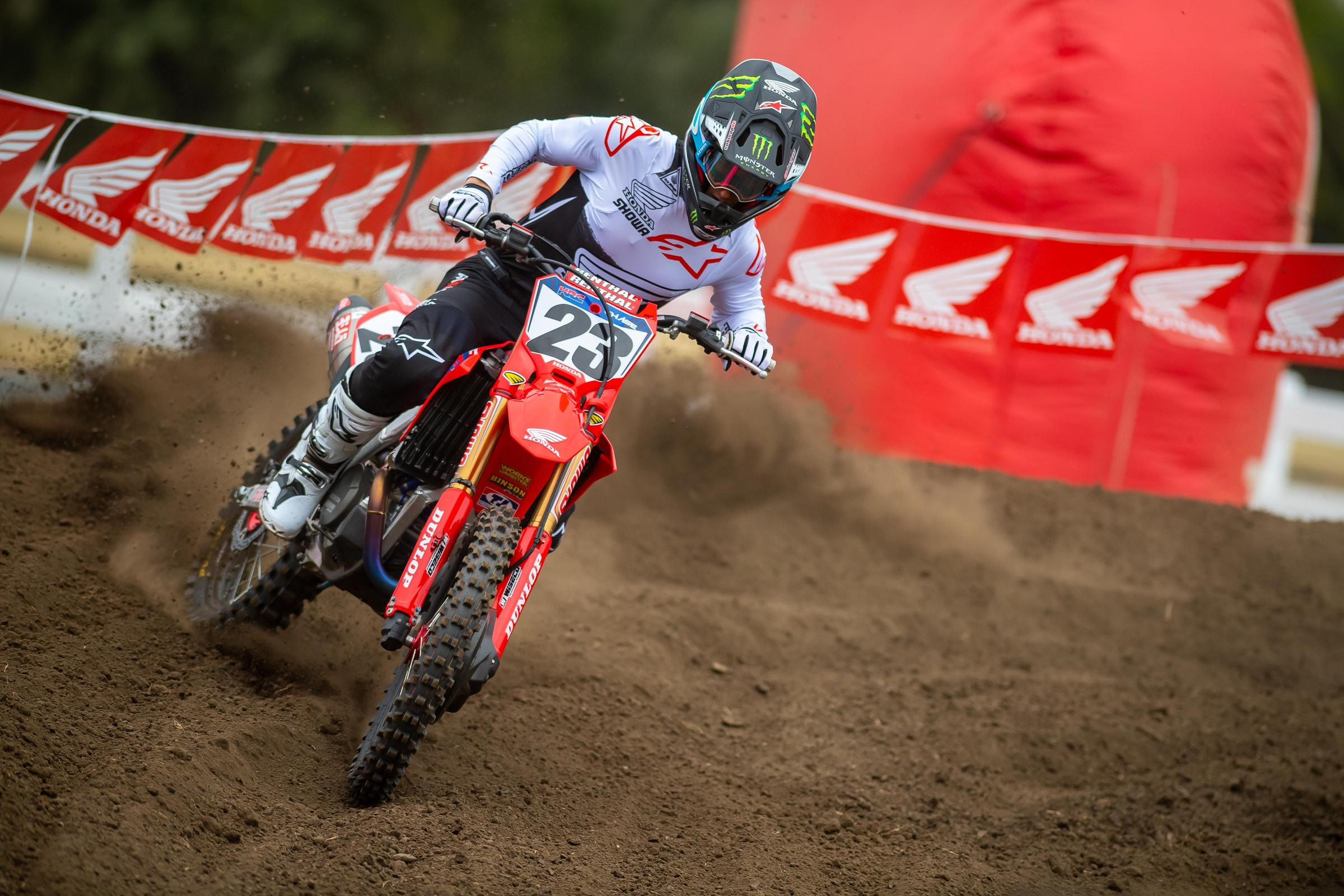 Chase Sexton had about the most stereotypical first full year on a 450 that is commonly expected out of rookies. He was blazing fast at times, but also found the ground a few too many times as well. It’s a weird juxtaposition given that he was known for being one of the smoothest and most calculated 250 Class riders to come through in quite some time. But the 450 Class is a different beast and Sexton quickly learned that in 2021 when he was ejected from his Honda while leading his second ever 450SX main event. But with the rollercoaster of being a rookie now long behind him, there’s a lot of eyes on Sexton coming into this year. But how does Chase himself feel about it all? We caught up with him last week at the Honda HRC intro to find out.

Racer X: Start off by talking about how it all came together with you actually riding and training at Castillo Ranch. That’s kind of a little bit out there for someone like you to end up there this off-season.
Chase Sexton: I train with Peter Park. He’s based out of Santa Barbara. So, I wanted to be out there for at least five weeks with him to kind of be with him and he’d be hands-on with me off the bike training. Obviously, when I’m with him I can’t not ride for five weeks. So, Kenny and them have always done that with Santa Barbara and people in the past, like McGrath and those guys, have always ridden that track. So, I talked to [Dave] Castillo, and he was super cool with it, and I rebuilt the track. It was really good. The dirt was awesome. It’s like you’re not in California up there. It’s really nice and the land is awesome. For me, I had a really good time. I felt like I got away from the SoCal kind of chaos and just everything that goes on here. You never feel like you’re settled in here. I felt like I was at home up there and had my own Airbnb. Was able to just kind of get away and do some training. It worked out really well. I’m excited and hopefully can get to do it again next year.

How cool is it though that, like you said, McGrath trained up there and it’s kind of infamous for his Honda videos and stuff like that? Now you’re a Honda rider, you’re training at Castillo Ranch. Is it kind of surreal to think about that?
Super cool. There’s a lot of nostalgia there. The supercross track, everyone has probably seen the video of Travis [Pastrana] doing that big jump over the fence and endoing. It’s right at the end of the supercross track. So, right when I got there, I’m like, “That looks really familiar.” So, it’s just a lot of history went on there and a lot of free ride jumps out there and whatnot. It was fun. I want to do it again next year. I feel like I’ve learned a lot and gained a lot from being out there.

Did you hit any of the free ride jumps up there?
A few. I didn’t really want to go out there, because once I’m out there I could just get lost. I did the Endurocross track a little bit. A few jumps, but they were pretty overgrown too, so it was kind of hard to find where they were and stuff. But I did hit a few and kind of tried to limit myself to that a little bit.

Talking about the more serious stuff, last season you showed you had the speed. You ran up front. You almost won a couple races. Is it simply that this year you just want to show that I can win these races? I can finish it off? Or is there even a step above that where you already think, I know I have the speed. I think I can run for this title straight up?
Yeah, there’s definitely a part of me that knows the speed is not an issue, but like it’s been proven, there’s a lot more to a championship than just speed. I think Cooper [Webb] has kind of proven that the last however many years. He won last year, not the year before but he won the year before that. So, you’ve got to be smart and strategic, especially with how everyone is so good in this class. Everyone has got speed. Everyone knows how to win, for the most part. Obviously, I’m trying to win my first race, so kind of have to walk before we run, talking about championship and whatnot. I think everyone obviously has that goal and they want to be up there and running for a title. So, for me, I want to win a race. I learned a lot last year from those guys and racing them. I was close a lot. Never got to finish it off. I’ve been watching those races a few times over and seeing the mistakes that I made. Try not to make those again this year.

Talking a little bit about the team this year and going off of last year for you, what was kind of the biggest learning curve or the steps that you’ve made from what you learned in your rookie year that you’re trying to improve on this off-season and get ready for going into 2022?
For me, I worked a lot on just being a little bit more mature. Obviously, it’s hard to work on, but last year I felt like I learned a lot from all those crashes and the mistakes I made. I learned a lot more than I feel like I would have if I had just went out there and done really well off the bat. So, trying to take that and put it into this year and just be more consistent. On the 250 I was really consistent and didn’t have a lot of mistakes, so I’m trying to get back to that and just be there every weekend and try and be up front, get good starts and put myself in the mix every race. That’s the goal.

I feel like we talked about you on a 250 too, that your style fit a 450 very well. Did you feel that now that you’ve got a year behind you, that transition was smoother than you maybe expected?
Definitely. Last year had a lot of bumps and bruises because being on a new bike and then also learning the 450 on a supercross track is a little bit difficult. I was kind of just lost last year a little bit, especially early in the season. So, this year I feel a lot better on the bike. I think the bike is better as well. So, I guess we’ll see coming up here shortly, but it should play into something good. I think Kenny [Roczen] even said too, we’re in a much better spot. We have a good team around us and hopefully year two is a lot better for me. I’m excited. I think it’s going to be a good year for Honda all around. For me personally, I feel like I’m more mature and I’ve had that experience. These guys have been racing for a while in this class and a lot of them have raced each other a lot. I’m new, but I feel like I can take my speed advantage a little bit and put it into something good.