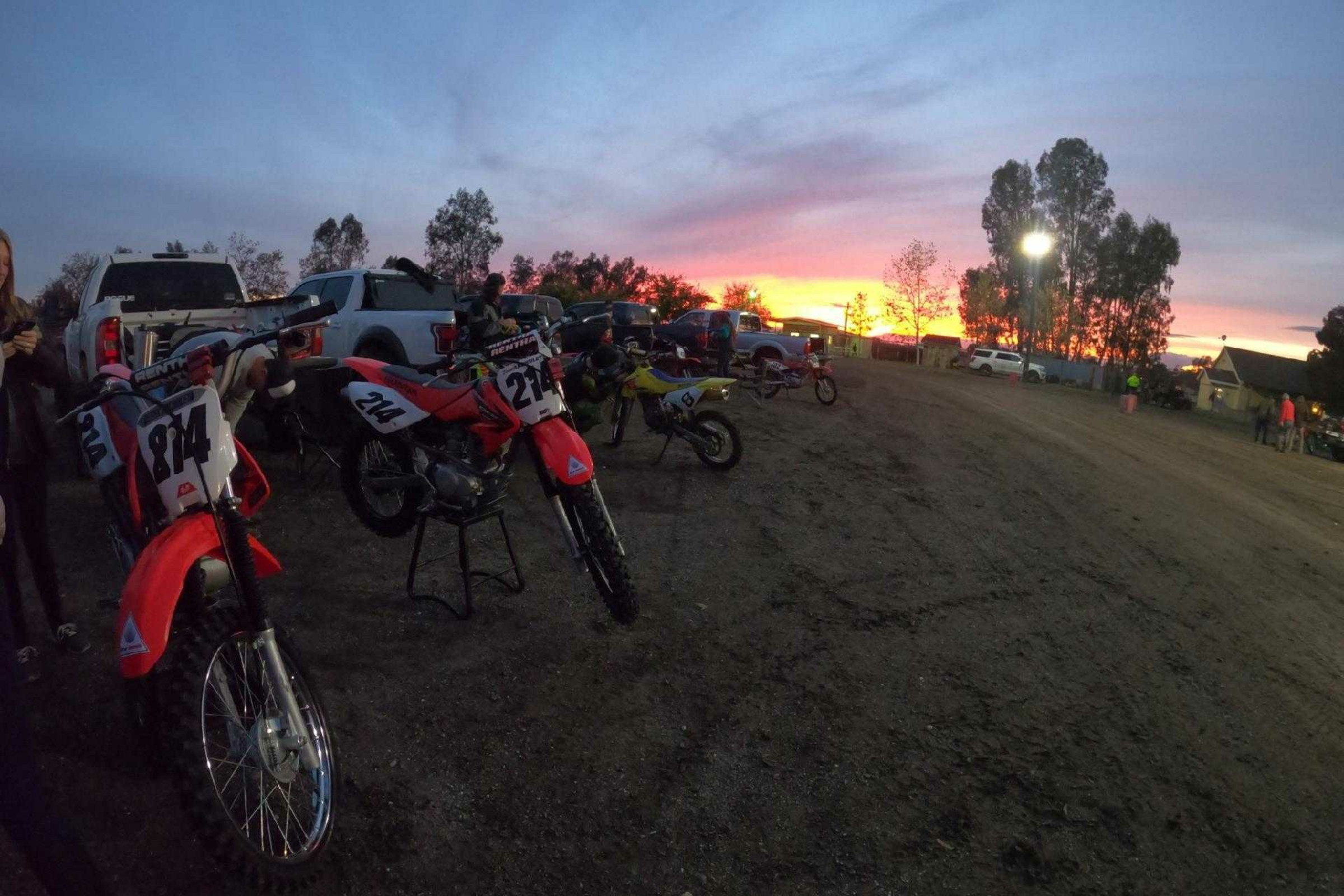 I came to a realization recently. Riding dirt bikes really isn’t about the bike at all. Maybe it’s not even about riding. This notion isn’t new for me, it’s been in the back of my head for a long time, but it was brought to the forefront, in a big way, over the weekend.

It all started when a text from my friend Troy startled me out of my deep state of Friday-night relaxation.

“You ripping minis tomorrow night? Jared is coming too, so you can take that bitch out!”

After an initial moment of confusion my mental clutch started gaining friction and it dawned on me that Troy was referring to the annual 100cc race that was happening the next night at Cycleland Raceway, a local track just outside of Chico, California. The race is in annual celebration of the track’s birthday, and the number of laps are determined by the track’s age. This year Cycleland turned 59 and I’d completely forgotten about it.

I struggled to find an excuse like I was up for jury duty.

“I’ll be hammered long before then, and I’m broke right now.”

“It only costs $10 and I think hammered drunk racing is encouraged.”

Knowing I was on the losing end of this argument, I went dark, hoping the texts would magically stop coming. They didn’t. In fact, they increased, now coming from an additional source—Jared.

“Bust out that old DR-Z and let’s race tomorrow night!”

“Same. It’s all old dudes going out there. I picked up an old XR100 from a tow yard just for this race.”

“I don’t think an Uber will also transport a motorcycle.”

Resistance was futile. I gave in. If the universe wanted me to have a fun time and go bang bars with friends, who was I to protest? I was a little concerned about my endurance—59 laps is no joke, but hey, it’s an oval track designed for mini sprint cars. It couldn’t be that hard, right? I also knew drunk riding wasn’t actually encouraged, as Troy had suggested, and realized I’d have to reign in the Saturday afternoon shenanigans or just be sneaky about it. If you know me, you know which direction I took at that fork in the road.

As I was prepping my wife’s DR-Z125 the next day I was pleased to hear the sound of rain. Finally, I had the excuse I needed to stay home and be lazy. No way they’d run this thing in the rain, right? Unfortunately the clouds gave way to sunshine, and in response to the muddy conditions, the track decided to wave the entry fee for both spectators and riders. The moto gods weren’t letting me off the hook, it seemed.

As promised, Jared, an old riding buddy who I now only get to see once every few years, showed up around four and we loaded up and rolled to the track. When we arrived I was surprised at the number of familiar faces present, many of which I hadn’t seen in a long time. It was like a reunion of hooligans-turned-adults. I dispensed and received more high-fives than a bunch of idiots at a bachelor party.

Following a rider’s meeting, roughly 40 of us rolled to the track. No practice, just a single lap for each rider to ensure transponders were in working order. I wasn’t nervous or anything, this was just for fun, but when it was go-time I’d be lying if I said I didn’t find myself involuntarily leaning over the front fender, elbows and RPMs up, letting the clutch flirt with friction. I couldn’t see myself, but I imagine anyone in that pose on a 2006 DR-Z125 looks about as cool as a hipster wearing pajamas and crocs. I probably looked even dumber on the start when I realized I was in third gear, not second. I dropped the hammer and the bike bogged hard, slowly rolling forward as everyone else zipped by. I’d started on the second row but coming into the first turn I think all six rows were ahead of me.

At this moment the thoughts of taking it easy, this was all just for fun, be careful, all went out the window. I had a ton of spots to make up and I wasn’t going to wait until lap 58 to do it! I downshifted and started bouncing that DR-Z off the rev limiter like a kid on riding a Halloween sugar rush. I was pleasantly surprised at how good the traction turned out to be. The dirt was wet, but it was clay and you could pretty much turn and burn with the throttle wide open for most of the track. I was no match for the top seven or eight guys, who apparently take this race very seriously every year. Their bikes were fast, they were tucked the whole way around. If you got in their way you were going to get banged around and stood up fast. The eventual winner, Marples (I don’t know his first name, but I saw the back of his jersey plenty), moved me out of his way more than once.

Somehow I was still doing pretty well, and might have been running in roughly the top-ten after about ten laps. I couldn’t believe how much fun I was having! Then I tried to cut a turn too tight, clipped a hay bale, and went down. I was just fine, but my bike ended up with some tracks on it thanks to the pack of animals behind me. At that point I regrouped, pulled a tear off, and cruised back into the race. I knew my shot at a good result was done, so I just looked around for Jared or Troy. Those dudes needed to get taken out! After a few laps of cruising I spotted Jared coming up behind me. I let him by and dropped the hammer. Letting him by was a mistake—I could not catch him! Lap after lap after lap I stayed almost exactly 20 feet behind him. I’d gain maybe a length by staying on the gas longer into turn one and he’d take it right back. I gave it everything I had but I just couldn’t get him. After the checkers flew he pulled into the infield and tried to give me a “good race” fist bump, which I declined, instead opting to line up in front of him, dump the clutch, and spray him with turf and mud. I ended up 16th, which didn’t seem too bad, all things considered. And despite the fact that I was on a super slow trail bike, it was easily the most fun I’ve had on a motorcycle in years.

Afterward the bench racing was as wild as the action, with friends laughing and going over what’d just happened. Beverages were consumed, insults were exchanged, and excuses were made. Even Troy, who’d broken his lower fibula when dabbing his foot in a corner, said he was excited to come back in 2022. Over the PA system the track owner’s enthusiasm echoed our own.

“The founders would be smiling if they could see what we just did! Now get those transponders back to the tower, they’re expensive!”

Simple race, simple machinery, huge fun. Little did I know the best part of the weekend wouldn’t happen until the next day. 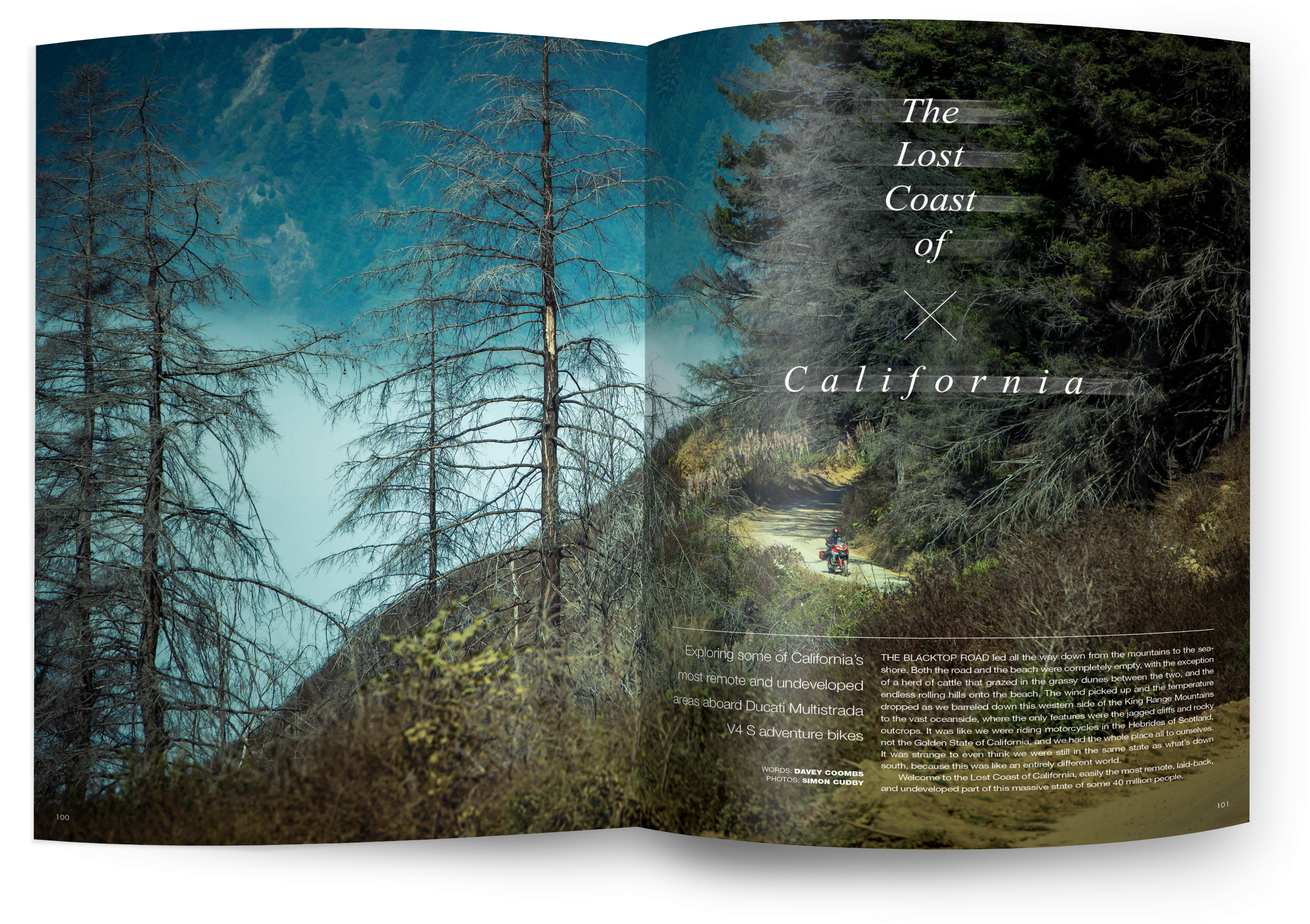 Exploring some of California’s most remote and undeveloped areas aboard Ducati Multistrada V4 S adventure bikes.

On Sunday morning over breakfast, I was telling my kids how awesome their super cool dad had done and my six-year-old son got amped to go riding. So, I loaded up his TT-R50 and my daughter’s KLX110 for me to use as a pit bike and headed back to Cycleland. When we got there, however, his heart sank—they were closed! Turns out there was insufficient time to prep the motocross track properly following the rain. The owner, however, was on the property and came out and took a look in the back of the truck. Seeing kids’ bikes, he waved us in and told us if we wanted to ride the kids track it’d be just fine. He wouldn’t even accept payment. In other words, my son had the track completely to himself and it didn’t cost me a dime!

As much fun as I’d had the night before, it didn’t compare to the joy of watching my little guy spinning laps, gaining confidence, getting bolder, and giving me a big thumbs up every single time he rode by. It was even better when I hopped on the 110 and rode side-by-side with him for what seemed like another 59 laps. Nobody around, no fancy motocross bike underneath me. The outside word did not exist, it was just him and me, bonding through our shared, two-wheeled experience.

Every now and then he’d hit a jump a little faster than intended and catch a whopping four inches of air and I’d hear him shouting with glee inside his helmet.

“Yeah buddy, that was amazing!”

One of the funniest parts of the afternoon was him talking about how stupid he thought the design of a jump was. The 15-foot gap apparently looked like the Grand Canyon to him, and it didn’t dawn on him that it was a double.

“Dad, this jump is stupid. The first one is good, but the second one is so small you can’t get any air at all!”

“The second one is the landing, bub.”

When he wasn’t riding he was running around picking up tear-offs and holding them up to his face and pretending to rip them off. My heart was so full, and every time he rode up to me just to say, “I love you dad,” it got one step closer to bursting. This is what riding has always been about for me. It’s about the shared experiences and bonding with family and friends. I’ve never found anything that brings people closer together and gets the corners of my smile closer to my ears than these experiences, and based on the weekend I just had, I don’t think I ever will. I don’t know what the future holds, but thanks to dirt bikes, I’ve got a hard drive jammed with incredibly rich and powerful memories that will stay with me forever.