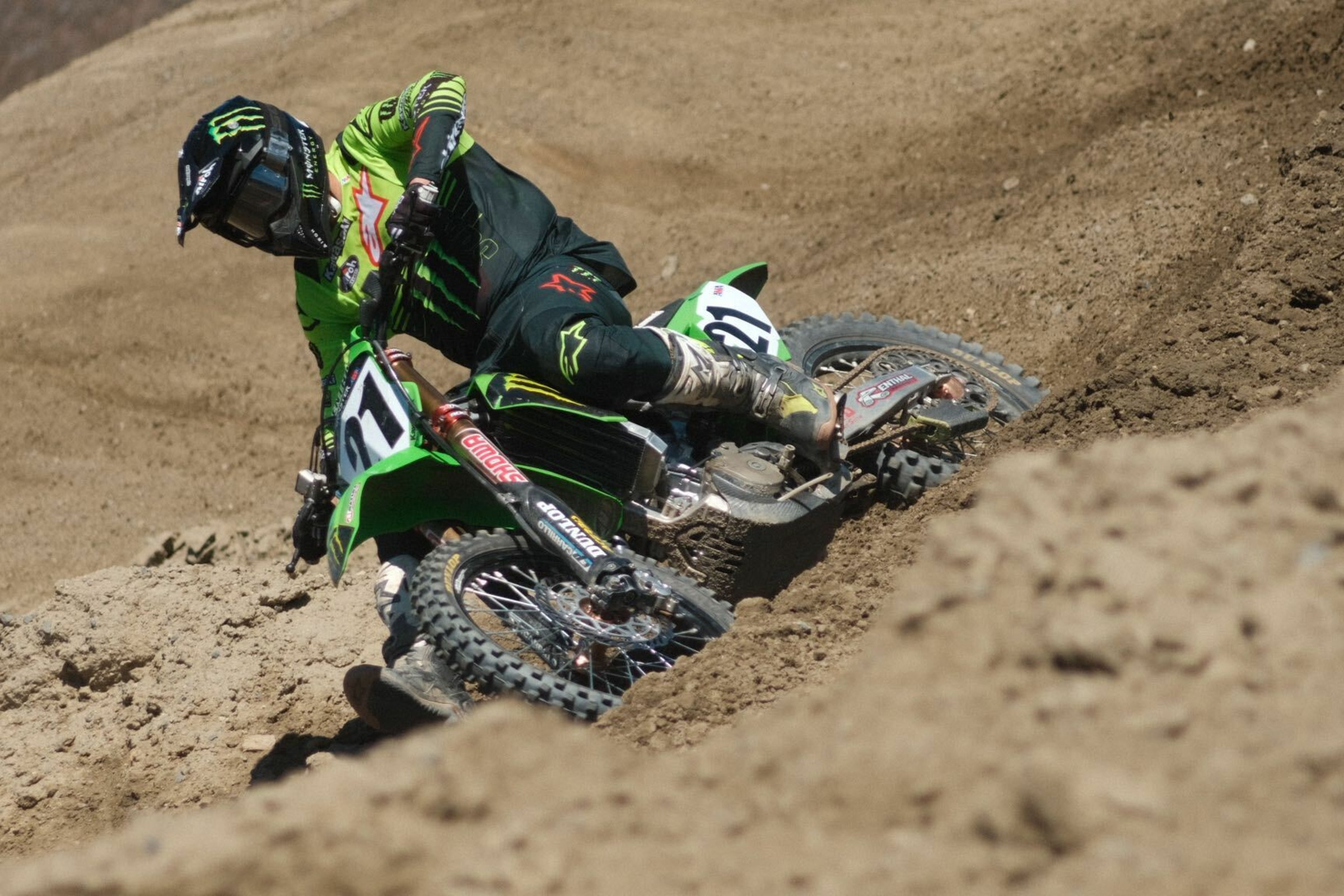 “I want to end it with a banger,” declared Monster Energy Kawasaki rider Jason Anderson when he announced his new deal with Monster Energy Kawasaki. He’s now into the process of putting in the work. Having just finished off a late-morning moto on the supercross circuit and handing his works KX450 off to a small group of engine and suspension technicians, Anderson grabbed a water bottle and set out to catch his breath. Yes, and for the first time in his eleven-year professional career, the 2018 Monster Energy Supercross Champion is now surrounded by people, places and things he’s not absolutely accustomed to (yet!) Having put in some serious time with the Rockstar Energy backed team on Suzukis, KTMs, and Husqvarnas over the last decade, the New Mexico-born competitor caused something of a commotion in the U.S. Supercross community this autumn when he inked his Kawasaki deal. Anderson, who has not won a 450SX main event since 2018 and is quite bent on getting back to the top step of the podium, took a quick hiatus from a test session to talk change and all that has come along with it for the 2022 season.

Okay Jason, thanks for taking a break from your testing and training out here to do this. Man, talk about sweeping and wholesale change when it comes to you and your motocross career, huh? As you’ve mentioned in the motocross media, it’s a whole new life and you’ve had to become accustomed to riding and racing a motorcycle with a green front fender!
Yeah, for me it’s like a whole new everything. Everything from the people I work with to the color of the bike to the energy drink sponsor to the bike sponsors. About the only thing that is the same is my gear. For me, I was Husqvarna for seven years and with the KTM group for about eight years. I’ve been with Bobby Hewitt and that whole team and organization since I started, so that’s 12 years. It’s a new thing and I’m excited and overwhelmed at the same time.

Yeah, but a big change such as the one you just made can totally light a match to a whole host of things, huh? I mean you’re a veteran. Change just might not be bad thing.
It’s not a bad thing. I needed change. I think it’s kind of the spark that I need to kind of get back at it and kind of try and reinvent myself. I kind of want to be an older good guy, you know what I’m saying? I really want to be able to be that guy who is going into his 30s and is still able to win races, you know? I feel like I get that spark here. And to be honest, it’s not like every day here has been really easy because I’ve been on a Husqvarna and a steel frame for so many years. Coming here to Kawasaki and working with the guys, I have great days and then I have days where I’m kind of floundering. But that’s fine. That’s the nature of the game and that’s what makes it so hard and that’s also what makes it so gratifying when you have success.

When the Monster Energy Kawasaki opportunity for 2022 first presented itself to you, were you thinking change can be good?
Yes, well, luckily Kawasaki made it happen where I could get two years. That was good. Once I knew that I was able to go for two years, I was real good. It was kind of hard for me to be able to say yes to a one-year deal because it would make me feel real temporary within the organization. I feel like I want to be able to have two years here and grow. For me, it was all weird. It’s like I had the opportunity to go here, but at the same time, I knew how late in my career I am and I knew how overwhelming of a feeling all of this would be to completely change. Still, I realized that I’m still hungry and I still want to do good and I need to challenge myself in every aspect of life. I think you need to do that. You know, the hardest thing for me here is that you go through learning to be an adult while having to have so much responsibility and for a while there, I think you have that “missing out” feeling of normal life and stuff like that. To be honest, we dedicate our lives to this. Now I’m 28 and you kind of see the end a little bit and I’m like, “Hell with that! I want to keep going as long as I can! I don’t want to give it up!” For me, I’m being selfish and I just want to do well. I’ve got to put up the numbers to be able to keep this ride going and I’m going to keep it going as long as I can. You get that burnout feeling but once you feel it and kind of feel that end coming, you’re like, “Oh man…” That’s a different feeling. I’m now at a point where I am thankful to be a professional motocross racer and I want to be able to put my best foot forward to be able to keep the ride going. This is that new spark that I needed to be able to have my mindset be fresh and be able to keep this my office.

It's pretty easy for me to see that you still totally love the sport.
Oh yeah. I’d say the hardest part for me is doing the media and stuff like that. I just like riding and racing and training and hanging out with my buddies. Then you have the other responsibilities that kind of make it harder for me personally. I don’t really thrive off the attention or anything like that. I just really love being at the track and trying my best. Some days I’ll leave the track and be like, “Hell with this.” Then there are days where you have a good day and you leave the track and say to yourself, “This is excellent. This is why I do this.” Those good days make those harder days so much more bearable. You know that if you keep pushing, those days will come. That trial and error and that challenge in life makes retirement seem so boring. It’s like if you get older and then you have kids, then there is your next trial and error section. I kind of feel like how life is and right now I’m not near that point. I’m at the point to where I want to keep my career-side of things going. I just want to keep it going.

In the motocross media you’ve very recently spoken about wanting to end your motocross and supercross career on a banger. You want people to remember you, huh?
Dude, I’m trying to be in that Tim Ferry mode [laughs].

You’ve certainly got your own way of doing things. You have fun with all of this. You’re much different than the other racers you compete against. You go your own way.
Yeah, I do. Right now I’ve got my friends that have lived with me for about the last five years. We all coexist pretty well. They’re there for me and I’m there for them. To be honest, in my house right now it’s me, my two friends Matt [Rice] and Tom [Journet] and we do our thing together and we do stuff that we enjoy. Matt does his art and he draws. Tom does videography. We are truly fans of the sport. We are even spending money for Tom to go film [Antonio] Cairoli’s last race in Italy. That’s just because we think it’s bad ass, you know? As far as the fans go, I really feel bad sometimes because I feel like I want to be able to just shoot the shit with them. We both have the same interests. We like to ride motocross bikes. Sometimes it’s hard for me to do that whenever we are working. That balance is tough, but at the end of the day, I truly am a fan of the sport. We watch all the races. We know all the races. We watch GPs. All the stuff. Between me, Tom and Matt, we just really enjoy it and we hope it comes across that way. And we want to show a brighter side of the sport. I work hard. I don’t really show people that I do. But I also like to mess around mess around and enjoy myself with my friends and we have the same interests.

It's almost as if you guys have your own little creative agency.
Yeah, we do. We have our garage right now and we just sit around and draw and watch videos and just come up with ideas. We have white boards all around the room we work in. My whole goal is that I would love to be able to take out an army of camera film guys and have us just travel to the races when I’m done. I want us to go out there and do whatever they think is cool. So instead of having any sort of marketing strategy, I just want the guys to be like, “Hey, this music is cool right now.” Right now we are putting together stuff with Willie Nelson or even rap music. I feel like we are very diverse and that we appreciate everything.

Okay, we’re all looking over to nearby Angel Stadium and Anaheim I come January 8, 2020. What can you do this year? You going to win? That’s a dumb question, but I want to hear what you have to say.
Yeah, I would really like to win again. I’m getting old and these guys coming in are hungry, but I’m not willing to let go, so we’ll see how it goes. This is all really cool. I don’t want it to end. For the first time I feel like I’m living in the moment. Sometimes you can get tunnel vision and I feel like I’m just kind of checking everything out now. At the same time, I want to work hard and I really want to go out there and win some races this year.