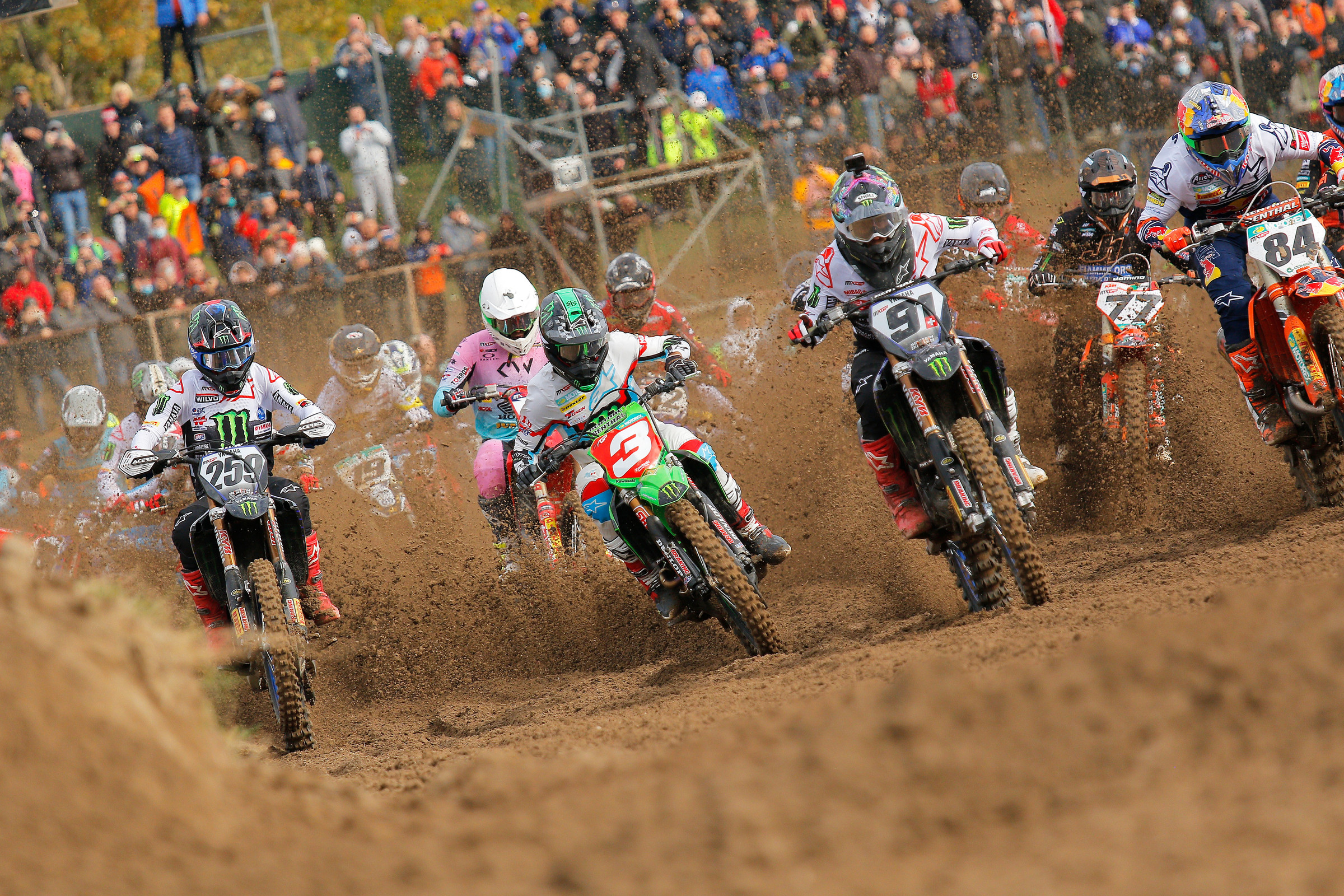 GP Report Views and Notes From the Penultimate MXGP of 2021

It was back to the Tazio Nuvolari Mantova sand for round 17 of 18, a track as narrow and twisty as the Pietramurata hardpack that had staged rounds 14, 15, and 16 in seven days last week.

“Back” for some. Those that took part in the 2021 Monster Energy FIM Motocross of Nations six weeks previously (Jeffrey Herlings, Tony Cairoli, Glenn Coldenhoff, and Ben Watson among those in the top half of the MXGP standings) already had a feel for the terrain and the layout. Compared to Pietramurata, Mantova was mostly flat and the sandy bumps were more profound. Jeffrey Herlings had run riot at the Nations for Red Bull KTM (and Team Netherlands) in a display of dominance he has been unable to show in a fierce MXGP contest this year. The Dutchman, most people’s tip for the 2021 title despite the outrageous situation of having three riders split by just three points for the championship entering the last two Grands Prix, was perhaps the most confident arriving to Mantova.

Herlings had relied on his teammates—Cairoli and Jorge Prado—to rescue points the previous Sunday after two uncharacteristic errors in the second moto further north in Italy, but the 27-year-old’s speed is undisputed, as evidenced by his seven victories, 12 moto wins, twelve podiums and eleven Pole Positions: all quantities higher than any other competitor and columns that he would increase on Sunday at Mantova. He bumped up the Pole Positions tally with a lap only half a second quicker than Monster Energy Kawasaki’s Romain Febvre. The Frenchman might have carried the red plate, but Herlings was the rider most on the prowl.

An expectant crowd were rewarded in the first moto with another gripping MXGP show. It’s been a vintage year for battles and unexpected incidents. Even if most of the noisy public where there to show their appreciation for Tony Cairoli in his last Grand Prix bow and wave flags for Tim Gajser they were given another captivating offering. Why? Herlings set the tone with a crash on the first lap while in second behind Febvre. The spill was a replica of the tumble he’d had in morning timed practice. He caught his left footpeg on the exit of a chicane section before the rollers and his KTM was then pinned under the pursuing Monster Energy Yamaha of the unfortunate Jeremy Seewer. Febvre was clear and Herlings then started a breath-taking trawl from the nether regions of the pack all the way back to second. He captured the ranking by using backmarkers and overtaking Cairoli; the Italian was less explicit about offering his teammate a position and track space to move through compared to the previous Sunday.

Febvre prevailed with the first moto win, pumping his fists and showing the emotion of the moment, stretching his points lead slightly at this most critical juncture of the season.

With the championship so closely split it was clear that a moment of drama would have big repercussions for one of the protagonists and it was Gajser, the reigning world champion, who drew the short straw. The Honda man was on the outside of the pack going into the troublesome first turn and was punted off the course into the notorious ‘Lupino Line’; named after the Italian rider that used the same trajectory to re-enter the race at the Nations, received a penalty, and almost cost his country the win. Gasjer re-joined the fray on the exit of turn two and HRC nervously waited details of the punishment for the full moto.

At the end of the 30 minutes and 2 laps the top four: Febvre, Herlings, Cairoli, and Gajser were bunching considerably. With one more circulation Herlings could have been in with a shout of victory. By the flag less than four seconds divided the quartet. Only a few minutes later and Gajser’s judgement arrived: the Slovenian was penalized five spots, and slid from third and eighth for a sizeable points-loss.

“Because of the way the track is designed, the safest place to get back on is where I went,” he lamented. “I believed I was just outside the top five when I went out, and tried to re-join in the similar position, so as not to gain an advantage, but when I finished the race in third, I was told that I had a five-position penalty. It is not nice to have to try and come back from that when the championship points are so tight but I tried my best to regroup for race two.”

No mistakes from Herlings in race two as he scarpered away from an effective Febvre. Gajser showed character to take third, even if he did lose the last overall podium spot to Cairoli. Herlings was trying to manipulate the action behind him at one stage to try and bring his capable KTM ‘wingmen’ into play with Jorge Prado also running in the top five. “I had a little bit of a gap and was looking to see where Tony was but in the end the gap was a bit too big to Romain,” he said.

The second race was less tense, less seismic but the identical scorecards for Herlings (his 98th career win and 130th podium appearance) and Febvre kept the championship contest at just three points. Gajser now has more work to do with a 15-point deficit with only 50 remaining.

“It will be all out war on Wednesday, there is a lot on the line,” Herlings admitted. “I think we both deserve it. Even Tim. It will be a good one. I will not crack under pressure.”

-Is Romain Febvre the dark horse? The Kawasaki racer took ownership of the red plate at a crucial time and will bear the weight for the final two motos of the year. Febvre has led the most laps of any rider in 2021 but has only one Grand Prix win. He has ruled six motos compared to Herlings’ 13 but has applied a high rate of consistency to his campaign.

“It may sound strange that I still don’t feel any pressure,” the Frenchman claimed. “We have really good starts with our KX450-SR here in the sand so I’m confident for Wednesday. We are really close and the best man will win. It’s game on!“

-Tony Cairoli’s third place was the popular result among the Mantova masses. It was a seventh rostrum appearance of 2021 for the 36-year-old in his penultimate Grand Prix and his competitiveness is still staggeringly good. It’s hard to believe that he will end his 18th season and his full-time career in just a few days and hours. With Jeremy Seewer fifth overall and Jorge Prado in seventh, Cairoli is fourth in the standings but just two points down from his young Spanish teammate who is still convalescing from his fractured lumbar spinous process. Wednesday will see the last appearance by the #222 in MXGP and Cairoli insists he wants to go out with more silverware.

“I don’t really care about fourth or fifth or sixth [in the championship],” he said. “My goal was to be champion again this year, but something went wrong…so now I just ride for the [individual] GP. The conditions are difficult at the moment because the other guys are going for the title and I don’t really want to get involved. Just being on the podium is good enough.”

-Winner last time out, Monster Energy Yamaha’s Jeremy Seewer, was lucky to escape a big crash in timed practice after over-jumping the finish line leap. The Swiss was unhurt but it dented his confidence ahead of the motos where he was still the nearest rider to the title dispute. His 5-5 delivered fifth overall and keeps the double championship runner-up also in the fight for fourth in the final MXGP rankings.

-MXGP featured a ‘new’ face in the form of 22-year-old Spaniard Ruben Fernandez. The 114 Motorsports rider had been promoted out of MX2 to the long-vacant second HRC factory bike next to Gajser with the brief to help the Slovenian in Mantova. Fernandez rose to the task despite only having limited minutes on the CRF450R. He went 4-7 for sixth overall and into the unlikely scenario of classifying ahead of countryman Prado on his ‘big bike’ debut. It was encouraging stuff by Fernandez, whose tall frame means he is often riding with a slight handicap in MX2 (combined with the fact that the CRF250R is not the fastest or most competitive motorcycle in the category) even if he had taken consecutive trophies in the last three MX2 races. He was steering Mitch Evans’ motorcycle and the Australian is expected to return to Europe after a complicated wrist injury that has seen him miss the entire championship. Nevertheless, Fernandez has duly placed himself in a prime position for the sought after HRC berth for 2023. On this evidence he could still have a small say in the 2021 MXGP story.

-MX2 was reduced to a sideshow, especially with new world champion Maxime Renaux looking comfortably in control with his Monster Energy Yamaha. The Frenchman ultimately shared identical scorecards with teammate Jago Geerts and the Belgian grabbed his third win of the year after increasing his performance to match and better Renaux in the second moto: the champion had escaped free with the first race. Behind the Yamahas came a disgruntled Tom Vialle. The Red Bull KTM man secured both holeshots to continue his status as the best starter in Grand Prix in 2021 but admitted that he lacked flow and could do no better than a 3-4 for third. The result keeps the Frenchman second in the standings, but Vialle will need to focus to thwart old 2020 rival Geerts on Wednesday: only seven points separate the pair in the quest for the silver medal.

-Just 72 hours until MXGP goes again and expect 2022 press releases to start appearing online in the aftermath of ‘Mantova 2’ and when the season draws the curtain on yet another heavily COVID-19 influenced campaign. We’ll see the extent of the KTM Group’s re-organisation, Kawasaki’s re-alignment with the IceOne squad (Husqvarna moves to the custody of the Standing Construct crew) and if HRC will take the unprecedented step of fielding three riders for ’22.

-Mantova 2 will not see the crowning of a ‘new’ champion. Febvre ruled MXGP as a rookie in the 450 class in 2015, Gasjer repeated the feat in 2016 and Herlings was a sophomore #1 in 2018. Gajser arguably has the most experience of delivering a gold plate thanks to his efforts in ’16, 2019, and 2020 but knows his fate is only partially in his hands. The meeting is likely to be the last one-day format in this turbulent mini-era for MXGP.