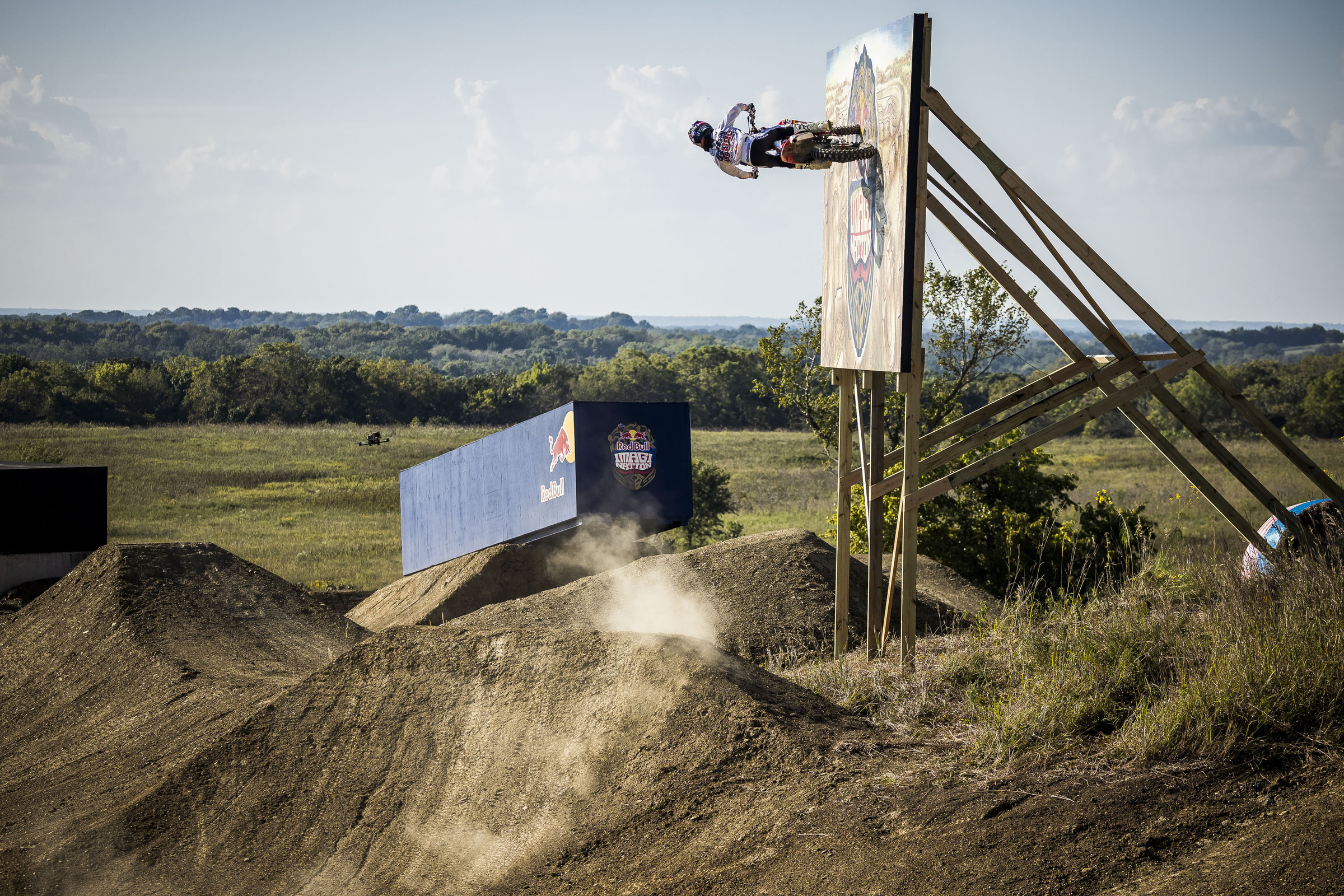 Open Mic Ryan Sipes Does It All

Ryan Sipes has done—and still does—it all. From AMA Supercross and Motocross to American Flat Track to the Grand National Cross Country (GNCC) Series to International Six Days of Enduro (ISDE), the veteran of the sport is still extremely capable—even at almost 37 years old. Sipes just got back from the 95th ISDE, where Team USA (consisting of Johnny Girroir, Taylor Robert, Layne Michael, and Sipes), took third overall in the World Trophy standings. Then, Sipes hopped onto his GasGas and took on Tyler Bereman’s Red Bull Imagination event that combines some of the biggest jump lines you have ever seen one after another. So, Sipes went from racing American Flat Track TT (barely any jumps) to the ISDE (barely any jumps) to a free ride event that is all about jumps.

Afterwards, we caught up to Sipes to see how it all played out.

Racer X: What is free riding to you?
Ryan Sipes: Free riding is being able to express yourself on a dirt bike, I think. Probably have the most of anything you can do on a dirt bike, but also show who you are as a rider and what your style, because everybody’s is different. That’s the cool part of this, especially with the course the way it is and all these different people, their different personalities. Everybody is a little different. I think it’s just awesome to be able to do this with all these guys.

How does it differ from moto and freestyle?
I’ve never done freestyle, so I don't know if it’s closer to that than moto, but it’s definitely a lot different than moto. Moto is so serious. There’s one goal, to win. Here, it’s like we want to win but we’re not that worried about it if we don’t. In moto you can psych yourself out because you’re scared to lose. Like, I got to win. Here, we’re going to have the most fun we’ve ever had and hang out with super cool people and hit the biggest jumps we’ve ever hit. So, I don't know. It just takes that edge away where if we were racing, we wouldn’t be hanging out and having fun like we are, but we care a little bit less about it than we would if we were racing.

How did you prepare for this?
My preparation for this was just the same as it would be for anything else. I just rode my bike as much as I could. I just got back from Italy for ISDE and I rode plenty there. So, I rode one time before we came here. But, the reason I say that is, because you can’t replicate this. There’s one place on earth like this, and it’s here. There’s nothing else like it. Axell [Hodges] has the closest thing to this and it’s nowhere close to what this actually is. I definitely don’t have anything like it. So, my preparation is show up and watch everybody else and just figure it out as we go.

We saw you learning the quarter pipe with Bereman… that’s BIG.
I did prepare a little on the quarter pipe. I couldn’t live with myself if… I came here last year and I didn’t hit it. I got a pass last year from the guys. They were like, “Yeah, you’re a moto guy.” But I can’t come back for year two and not hit it. That’s just on me that I don't want to come back again and not be able to do it. So, I went to Tyler [Bereman]. Tyler was awesome. He walked me through the whole thing. We learned it, filmed it. I hit it 30 times. Only crashed twice and no big ones, and I did it really good a handful of times. So, it’s more preparation than I did last year. I’m still nervous about it, obviously. It’s a really big, scary thing to hit, but I’ve done it and I plan on doing it again.

So being “The General,” you are coming off of ISDE to this, how did that go?
ISDE this year wasn’t as good for me as it has been in years past. I just struggled a little bit with the terrain. It was super dry and rough. I was on a two-stroke, which the two-stroke is a great bike and it was really good when the tracks are good, when there’s moisture, when it’s not just a warzone. But they were warzones pretty quick. So then the two-stroke was tough for me. I don't think it’s incapable. The bike’s not incapable of doing it. I just wasn’t riding it like I needed to for it to be capable. I’ve not spent enough time on it. I grew up two-stroke, but it wasn’t on stuff like that. I’ve been on a four-stroke for 15 years. It was just harder than I thought it would be to go back and then adapt to that bike on that terrain. As a team, it was still pretty good. We got third. But it’s different than it was in years past. Now anything but a win is kind of a letdown. Which is crazy that it’s flip-flopped that quick, because five, six years ago we were stoked to get second or third or whatever. Now it’s like, it was okay. It’s cool, be we were holding ourselves to a higher standard, but it’s just motivation to be better next time.

Check out The Imagination Competition below and go to 9:40 to see Sipes and Josh Hill have some fun, until it nearly turns very serious for Sipes. The risks are real!

And before that you were at the Peoria TT doing American Flat Track?
Yeah. I did Peoria TT on Saturday, the 21st. I flew to Italy Sunday the 22nd and was there for two weeks. Flew home and then five days later came here. Like I said, I rode plenty over there. We were on the bike eight hours a day, seven to eight hours a day. So, when I got home it was kind of like, take a little break. I knew I had this to get ready for so I rode once, but it came back pretty quick. This is more fun. It’s easier. It’s more dangerous, but this is way easier than racing a supercross or an outdoor. Physically it’s easier. It’s so much fun that once we get rolling and start hitting stuff, it’s just like there’s this vibe and you just start rolling with it. It’s like, yeah, this is dirt bikes. This is super fun. We’ve been having a good time. It’s fun just hanging out with this group.

I feel like people look at flat track and think it’s the easiest thing you do.
Flat track is gnarly. Physical-wise, it’s not that bad. If it’s rough, there’s three bumps, compared to an outdoor when there’s a million. But just the skill part of it to find traction where there isn’t any is kind of what it comes down to. I kind of struggled at Peoria. Ended up with a fifth. I got fortunate with some things. It’s definitely one of the harder things that I do, coming from moto and then trying to adapt and learn the technique to do the flat track. If it weren’t a TT, I’m getting smoked, because those guys are so good in left-hand corners. I just can’t compete with them. I feel like it’s one of them things you’d have to grow up racing it. It’s hard to be as good as they are. They’re awesome at what they do. But, that’s totally different. Obviously, that’s pretty flat. This is not flat by any stretch of the imagination. So, it’s cool to have been able to do that and then come here and do this. It’s fun to just try to go and fit in with whatever’s going on. Like, I can do that. Yeah, let’s go.

Yeah, you’ve been pushing everyone out here to go bigger! Did you free ride much during the earlier days of your racing career?
Free ride… Back when supercross riders still went to the hills, I went to the hills and I loved it. It’s not that I did it often, but when it rained… My first year pro I moved to California in December and it rained the whole month. Nobody could ride supercross, so we went to Beaumont. I was like, "This is awesome! There’s nothing like this back east!" I pretty much hit everything that all the other free ride guys were doing. That was super cool. Then all of a sudden it turned way too serious. If you go to the hills, you’re not serious about your career. You’re never going to be good. It’s like, what happened to all the fun? Now we just have to pound laps on the supercross track. So, to now come back, this is a whole other level than going to Beaumont when I was 18, but this is one of the most fun things that I do on a dirt bike, I think. One the scale it’s so much higher than anything I’ve ever seen. Then to go out there and be able to hit it, it's awesome. We’re doing some big stuff and some little stuff, and some tech stuff. I love it.