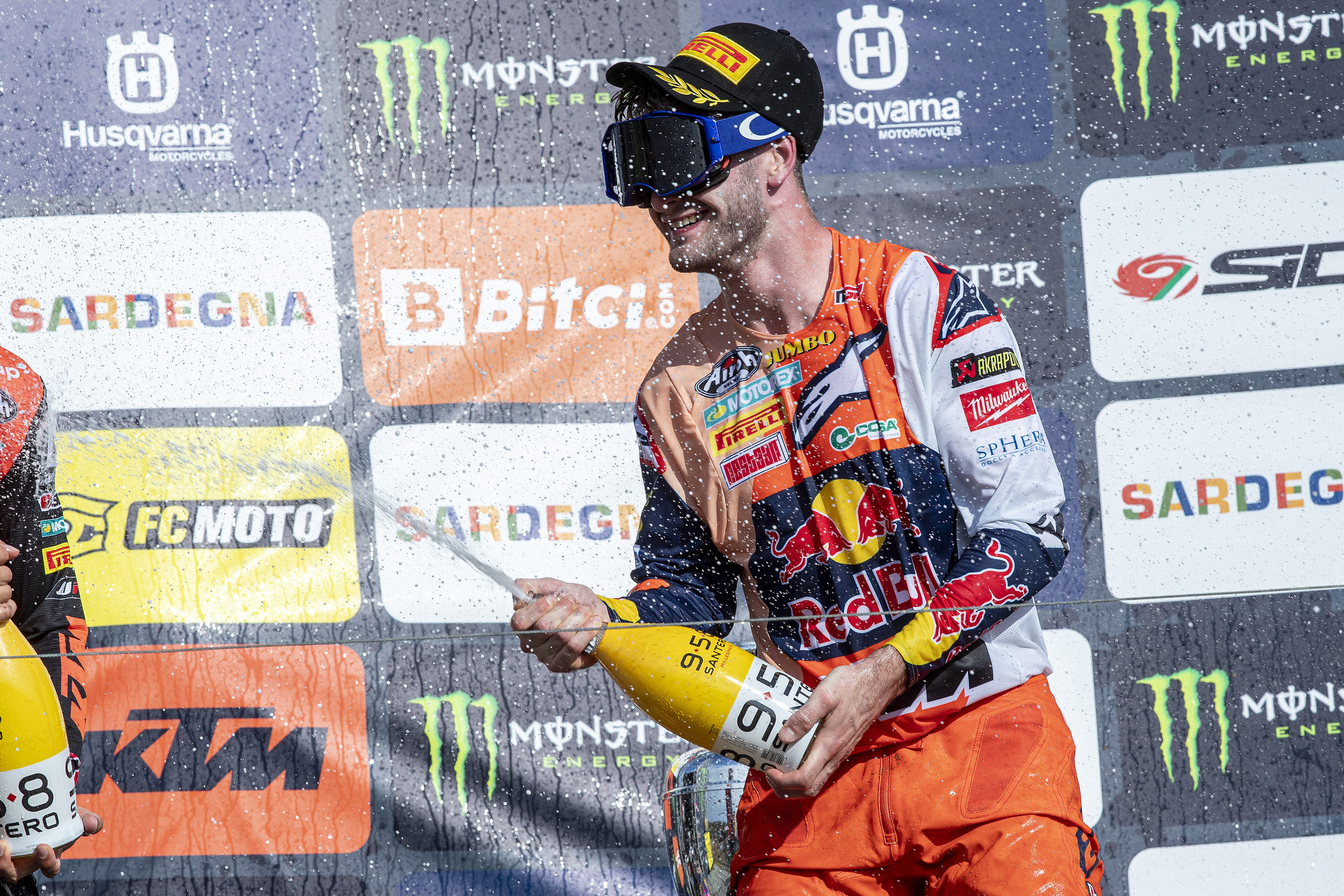 Somehow, only two months after being landed on two turns into the first lap in the Netherlands and fracturing his shoulder, Jeffrey Herlings finds himself leading the MXGP championship. The tenth round of the FIM Motocross World Championship took place over the weekend in Sardinia, Italy, at the sandy Riola Sardo circuit where championship leader Tim Gajser (who entered with a rumored broken collarbone that he had surgically repaired during the week) struggled, going down in the first turn. Insert sand expert Herlings, who holeshot and ran away with the race win, lapping the #243 as he took the checkered flag. When the second moto began, Herlings tracked down his brand mate Jorge Prado in order to take the race win, going 1-1 as he claimed the overall and the points lead as Gajser struggled to 19-8 finishes and Antonio Cairoli did not race following a crash in qualifying. MX Vice’s Lewis Phillips caught up to the #84 following the action.

MX Vice: Jeffrey Herlings, 1-1, pole position in qualifying and the red plate. Perfect doesn’t even cover it, really.
Jeffrey Herlings: Could it be any better for today? Maybe we could have had a better start in the second moto, but we started second. If we would have been first it would have been easy going, but we had to work for the second one. Practice was good, timed practice was good, so I was able to get a good gate pick. Then first moto I pulled a holie. I was pretty surprised with that one. Then I just felt comfortable the whole moto and I was leading and pulling away every lap almost, so I was happy with that one and it was super good. Second moto I had a good start, with second, but yeah, you know Jorge when he’s leading, he’s hard to pass. He’s not doing anything dirty whatsoever, he just rides defensive, he uses the right lines on the inside. He’s really good with that. Then I saw the countdown clock counting down and I was like, “We’ve got to put the hammer down.” So, I passed him with like five laps to go and then I managed to pull a little gap. So, 1-1, and I went from minutes 34 points to plus one or tied, I don’t even know.

You were much, much faster than Prado in the second half of the track, but the first sector he could eek out a little bit of a gap and that made it harder for you to pass him.
Yeah because in that part there were a lot of 180 turns, and he kept roosting me. At one point I was starting to run out of tears offs. At some point I had to give him a little bit of a gap. I still was able to fight as hard as I could, and I was able to pass him.

What did you think of this track as a GP? I would have liked to have seen them water it a lot more, and maybe not flatten it, but they had 65s and 85s. What did you think?
Yeah, 65s and 85s were yesterday but only the beginning of the day. Yeah, there was so much wind, so the track dries out so quick, you have to water more. I think that’s why it was so one-lined; you just go inside, inside, inside everywhere, you just defend. I think with more water the track would get more rough, and you get more options. That’s the only thing I would advise for the future. Water the shit out of the track! [Laughs]

You have the red plate now, one point up. Lot of guys are going into a weekend off, but you’re hammering down at the ‘Nations. No regrets over that? You’re happy to go into Mantova and give it your all?
Yeah, I mean some of them are not there for the risk. But it can happen at anytime. But it [risks and injuries] can happen at any time. It happened before for me, many times in practice I’ve had a crash, with Tim [Gajser] it also happened in practice, so if it needs to happen it might happen. If you’re thinking about that you shouldn’t even go to the toilet at night because you could also crash! So, yeah it’s a shame a lot of the guys won’t be there, I hope Tony [Cairoli] will be there because he’s one of the top five in MXGP, he’s the only one of them that’s supposed to be there, let’s hope he’s fit enough [after the injury suffered in practice] to race there. For the rest, there’s Glenn [Coldenhoff], but we’re divided into two different classes.

The open class, you may just dominate.
Actually Glenn requested me a month ago if we wanted to swap classes.

That came from him!? Did he just want to run the #1 plate?
No he asked me if he could have the longer break between motos. For me I’m a team player and for me it didn’t matter if I have to race MXGP or Open Class, because I race the same guys every weekend, and no matter what class you race, you only have to race half of them. For me it doesn’t really matter, I’ll do it for the team to make Glenn feel better. He requested it so I’m happy to do it. For me I just have a shorter between motos, but I can sleep in a little longer on Saturday so that’s good.