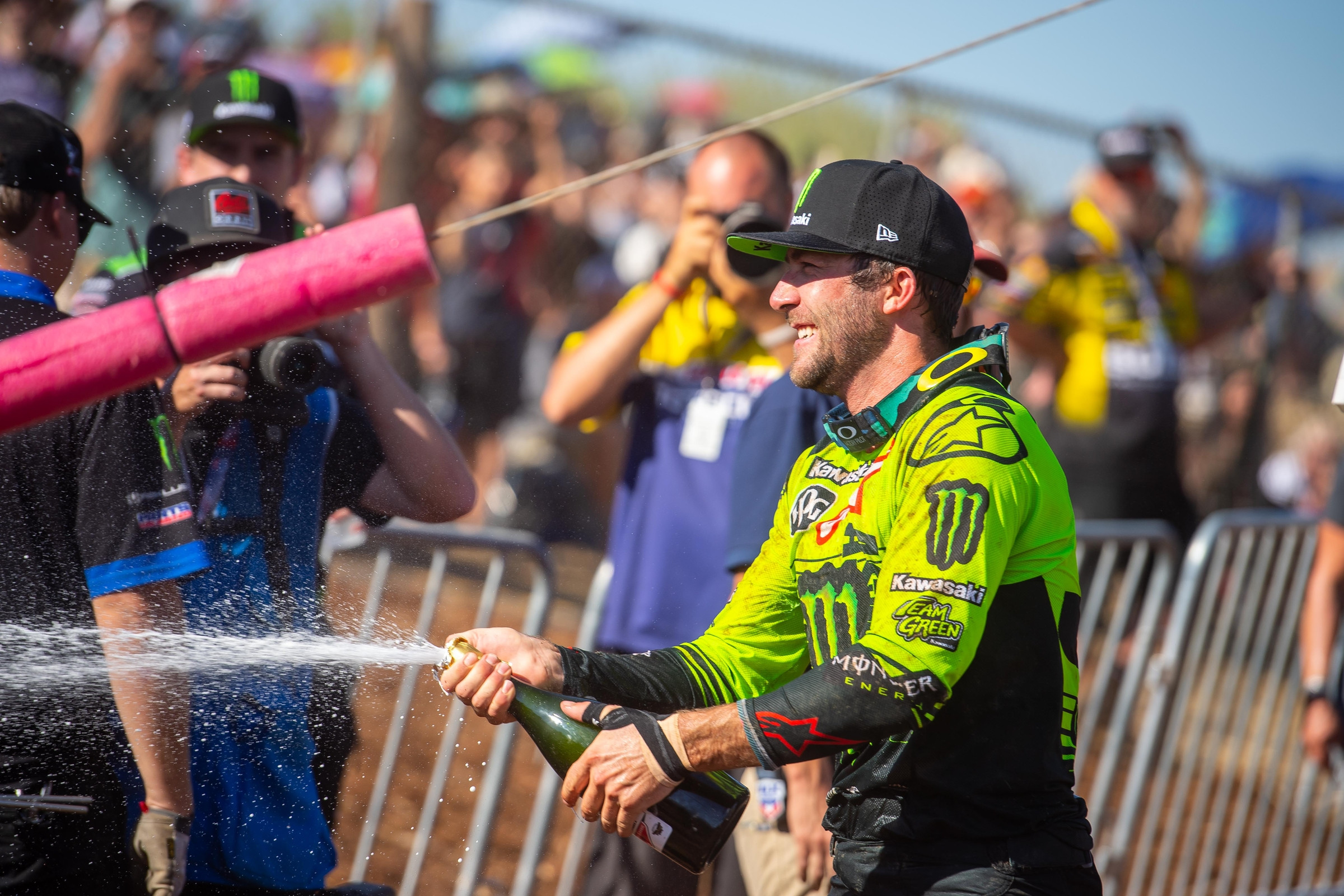 Saturday’s Hangtown Motocross Classic marked the final time in a six-year run that Eli Tomac would hop aboard his Monster Energy Kawasaki. In his time with the brand, Tomac amassed four championships in the 450 Class with three Lucas Oil AMA Pro Motocross Championship titles and one Monster Energy AMA Supercross title. He also claimed 62 wins with the brand and had one of the most successful runs of a rider/brand combo in motocross history. The Colorado native was able to say farewell on top as he won the final moto at Hangtown on Saturday to claim second overall on the day. As Tomac says goodbye to Kawasaki and to long-time mechanic Brian Kranz, he spoke with the media via Zoom at the end of the day to discuss it all.

It sure looked like we were going to be talking to you as the overall race winner. Just got edged out by Dylan Ferrandis, but you did win the final moto of the year. Are you still satisfied with the way it turned out, even though it ended up being a very close second overall?
Eli Tomac: Yeah. It was close. It was disheartening from moto one because I had a really good pace going. I felt like I was going to be able to catch those guys, and of course just missed my one main line there, the line that I was taking by a couple inches. I washed my front end out on that pretty gnarly off-camber there. Ended up crashing. I actually tweaked my thumb pretty good. That’s why once I got up and going, my speed was kind of mediocre. Thankfully, I was able to tape it and get some strength back into it for moto two. Rode pretty good in moto two and made my way to the front, and that was it. Once again, Dylan was strong for those two motos.

Did you know actually where it all stood? At one point did you think you had the overall? Or did you not know how that was all going to play out?
I was watching it, and I was marking [Christian] Craig. I believe [Max] Anstie was there. Then I saw the red plate and I knew he was coming. Then I kind of knew my chances were gone. But I was pumped, and then whenever it was, five to go, Dylan came through and that was it. You can only control what you’ve got for yourself.

Obviously, a big day for you being the last day out with Kawasaki after a long relationship, but how excited are you for what’s to come? I know nothing is announced yet, but just for you, it must be a pretty exciting time to look ahead.
Yes. I obviously can’t say where I’m going or what my future holds that way, but really, I’m pretty emotional today, up and down that day. We had so much success with Kawasaki and with my mechanic, Brian Kranz. So, that’s what’s hard to swallow. You kind of become family as a team. We didn’t end, speaking about Kawasaki now, on any bad terms that way, to where you’re not speaking to each other, you’re not working with each other. We worked totally on good terms throughout this motocross season, and that was it. It was tough that way today leaving the track, but it’s just a life goes on kind of thing. That’s all you can do.

Just going back to that, and congratulations on such a long career at Monster Energy Kawasaki, are you able to tell us about any contributing factors of why you chose to leave Monster Energy Kawasaki and not continue the rest of your career there?
No, I can’t. Just out of respect of my past success with Kawasaki, I can’t. It's just a decision that I had to make on my own that way. Like I said, we ended on good terms so I’m not going to say exactly why or some specific reason why I left.

Going back over the years that you’ve been there, is there a moment that stands out as a memory that’s going to be with you forever and one of your highest moments at Monster Energy Kawasaki?
Yeah. That’s the fight for the supercross 450 title, and obviously the 450 motocross title was first. That is huge, too. But that supercross title was pretty dang elusive to us for some time. So that’s one season I look back on, and during the COVID[-19] thing. We had a lot going on in 2020. It’s recent memories. Twenty-twenty is a special year.

We know Hangtown usually opens the season, or it’s at least towards the front, so what was the track like today and how was it to finish off the season at Hangtown for 2021?
It started out more of a hard base. Actually, the whole day the track was more hard base than what we’ve had in the past. Then it had pretty good character at the end of the day, but for sure it was one of the more hard-packed tracks we’ve been to. To be honest, I think that’s fine. I don't think every track needs to be exactly the same and ripped deep and watered to perfect conditions. So, I did enjoy some hard-packed conditions, even though it did bite me going down that off-camber. Overall, it was a pretty hot day. Comparing it to end of May, it kind of felt the same. All the fields were still brown around us, that way the same. So, to be honest, it wasn’t totally different than May.

Like you mentioned, this is your last hoorah with Kawi but also with your mechanic there, Brian Kranz. I’m just wondering what that relationship has meant to you over the years and working with him for the 11 years that you’ve had, and almost how difficult or strange it’s going to be next year not working with him.
It’s going to be strange. You basically become family that way. When you show up to the race and race weekends, it’s like you’re a team. So, that’s what’s going to be different about it, is not having him there. We’ve had a long, long-standing relationship. It’s 11 years. I don't know if many guys have beaten that as a combination. Kranz was bulletproof. I could trust the bike every single weekend. You never have questions about what the guy is doing. Bolts are tight, things are going to stay together. He had a gnarly track record that way. It’s tough to think about not having him there.

This track has had some milestones for you. You won your first race here and now it’s going to mark your very last race with Kawasaki. You had that ride on the Honda a few years ago. Do you happen to have a special relationship with this track, or is it just another track to you?
It’s not a track I look forward to going to ride. I don't know why. Two-thousand-ten was very special. ...2015… Nothing against the track, it’s not like, “I can’t wait to get to Hangtown.” It’s not one of those for me. But for some reason I normally do have good success there.

You turned pro in 2010. You’re going to go into the ’22 season, and you’ve reached the highest of heights and you’re still battling to get those titles. A lot of riders have chosen to go another route and just walk away from it. What is it that keeps your motivation going to want to keep coming back, when other riders don’t do that?
For me, I still have the itch for chasing green flags and checkered flags and being on the start line. I’m not checked out yet. I still like to do it. I still enjoy trying to win races and trying to be the best guy. That’s why I’m still around.

Watch the full interview with Tomac from the 450 Class post-race press conference below: