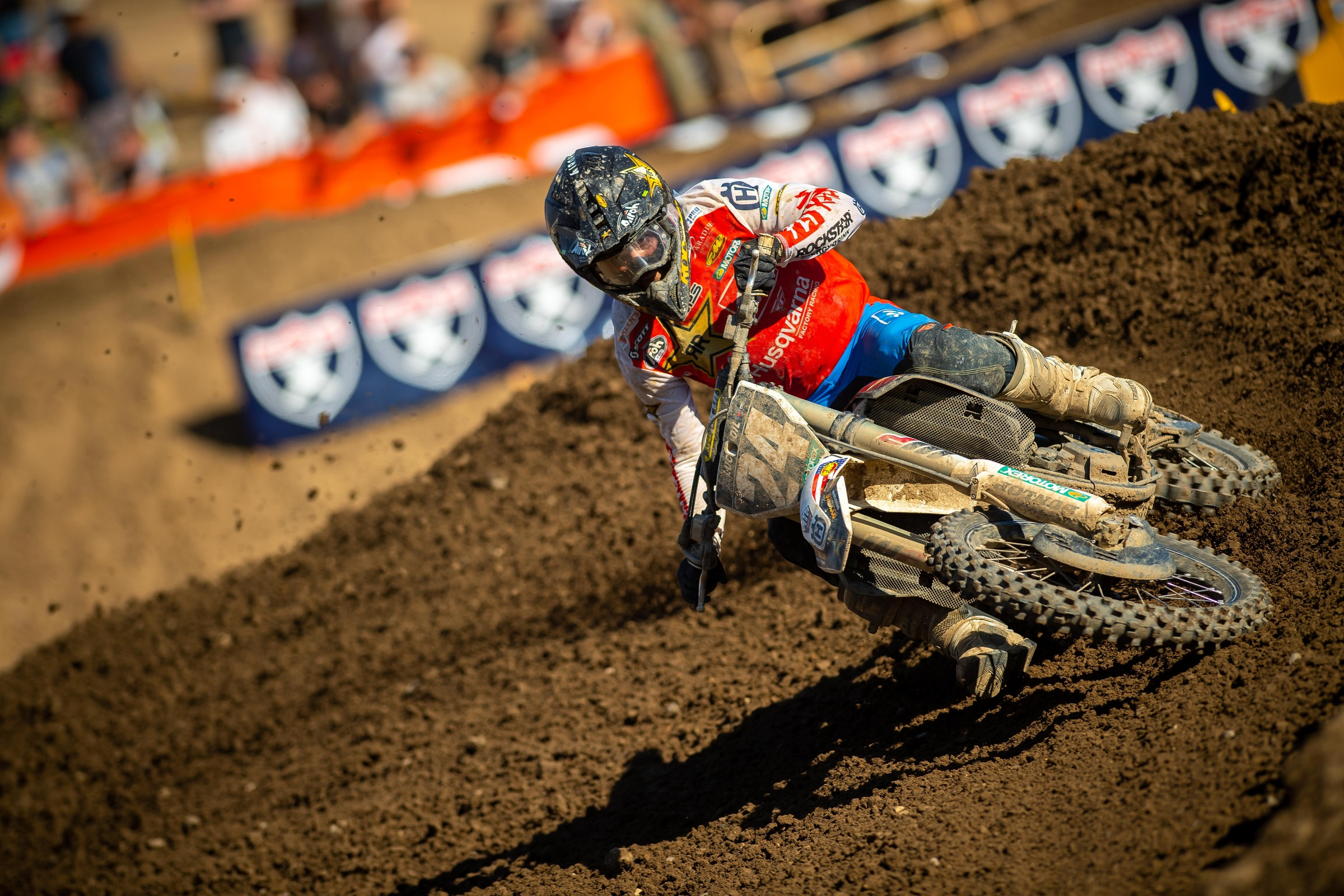 Between the Motos Hampshire Digs Deep

Rockstar Energy Husqvarna’s RJ Hampshire has been struggling for over a month with an illness, but he keeps testing negative for COVID-19, so he keeps on racing. Despite the struggles he’s still able to put in decent motos. He shadowed race leader Justin Cooper for much of moto one at the Hangtown Motocross Classic before dropping off late to save energy. He managed another overall podium at the end of the day. He spoke about it all in the post-race press conference.

RJ, how are you able to do it week in and week out? The last couple events it looks like it has been rough on you physically, and yet you’re up on the podium again. What has the experience been like here in the back half of the season?
RJ Hampshire: Yeah, it’s been brutal. I honestly kind of struggled at Unadilla if you remember. I kind of faded both motos and that’s out of the ordinary for me. Just really kind of was searching. I didn’t really know what was going on. The Tuesday after Unadilla was the last practice day, I’ve actually had that I did legit motos, and I felt like I was dying after that. So, it’s been a long three weeks of just trying to recover. It seems like Friday is my lowest heart rate day and I feel the best I do, and then Saturday race day comes and I’m right back in the same situation. If I would have timed the sickness a little bit better to have it during the break, that would have been easier on me. It’s just kind of been a hurt locker the last three weeks. It’s been brutal. I’m used to suffering, but it’s been tough.

I saw you after that last moto. You looked like you were really struggling. What is it when you’re on the track that you’re dealing with? What are you fighting against?
If you thought that was bad, you should have seen the last two weekends. That was nothing compared to Indy second moto and then Pala last weekend. I’ll just be honest. I thought for sure I had COVID. I went and got tested three times and they all came back negative. It was rough for I’d say two weeks where I had no energy. I would just come home and pass out. I was on all the meds to try to cure it or whatever, but I was still testing negative so that’s why I was still racing. Didn’t really know what was going on. It just attacked my lungs pretty bad. I couldn’t breathe. I’m struggling to get deep breaths. I would go out to practice, and I would do two laps and I would come in and I’m like, I’m smoked. That’s it. It was literally just adrenaline for the motos. That’s how I was able to even finish one moto. It just kind of kept me going. Pala, I puked in my helmet with like four laps to go. That one was gnarly. I’ve had a lot of suffers, but that one was brutal. Today I puked the last lap, but it was all from lack of oxygen getting in. I just don’t feel like I can breathe fully. It’s been tough. I felt like I should have been back to normal after the first week but having to race on the weekends you just keep drilling yourself. I tested negative again. So, there’s really not much to say. I think the tests may have been wrong or something along those lines. But we made it, so that’s kind of all that matters.

In the first moto, you were kind of slowly creeping up on Justin for a long time, and then I think 20 minutes in you made a big mistake at the bottom of the hill before the rollers. That seemed like it maybe took it out of you. Did you think you had it in you towards the end there to maybe catch him and actually pass him for the lead?
To be honest with you, we were coming in with the plan, because I didn’t do anything all week, Doc G [Rey Gubernick] called me Monday and he saw how bad I was last weekend. He was like, “Look, I think if you want to race this weekend, we plan on going out and trying to win one moto, and then kind of reevaluate everything.” That second moto, I didn’t even know if I was going to have anything left. That’s kind of where I was at in the mindset where I was going to go as hard as I could for as long as I could, and then I think it was right around twenty minutes I made another push. Like you said, I made a mistake. I bit my tongue pretty bad at the bottom. Then I was like, if we’re going to try to fight for an overall podium, we need to kind of save myself a little bit. I was definitely hurting, but that was more just kind of saving myself for the second moto. I saw Hunter was coming there at the end, so I kind of had to pick my heart rate back up, which didn’t end up too well! [Laughs]

Your team has been kind of decimated by sickness and injuries. I’m just wondering if that has played a role in your decision to continue to race through your illness? If you had a full squad, do you think you would have raced through it?
Man, I’m paid to race. If I can race, I’m going to be out there. That’s just kind of how I look at it. Me going out and giving all, I have for one moto, and if I can land on the box, that’s getting more for my sponsors than me not showing up on the weekends or me rolling around in eighth place. So, I don’t regret it. I would do the same if we had a full lineup. I presented the team with negative tests, so I’m not just going to miss a race for being sick. Indy I was completely by myself all day even just in case I did have it. But I’m a racer, so if I can race, I’ll be there.

We believe that you probably would have been on the des Nations team if the team would have been announced, but they’re not going to race. What is your reaction first of all to not being able to go? You had said earlier you would have liked to have done it. Then also with the sickness, did that complicate things a little bit?
Yeah. They had the three guys picked and we had a big meeting about it right before Pala. I’m born and raised American, and I would love to represent my country. So, if I got the call, 100 percent I was in. Yes, let’s do it. I thought the sickness would be gone by now and the other two guys that were on the team were also struggling with their own deals, and then when the restrictions came up, there was just no way we were going to be at our best or it’s going to be safe or for it to make sense for us to go. I would want my family to be part of that and I just straight up said, if we test positive and we’re stuck in a hotel room for twelve days or whatever it is, that’s just not fair for any of us. For the team, the day that we announced we weren’t going, the next day all of the hotels, all of our bikes, everything had to be sent out. Even the paddock, the restrictions over there weren’t even for sure until the following week. It was a full-on deal. None of us thought it was a good idea. I hope I have a shot to do it again next year. Like I said, I’d love to represent the country.

Were you getting a little nervous with feeling so sick? If the team had raced, you really would have had only two weeks to recover. Would it have been a struggle fest there too?
[Laughs] I don't know! I was better this weekend than what I have been, so I think I’m just kind of blindfolded by the whole thing. I feel like if I didn’t race one weekend it might have been better, but then also the guys that did have it, they didn’t race and they’re still not better. So, I did what I could. Honestly, after the first moto at Pala, we had a goal, we’ve had such an up-and-down season, but I really wanted to get third in the series. It doesn’t really change much for me, but just to say I got third. We were close there that first moto in Pala and then gave it right back the second moto. So, I knew coming into this weekend we didn’t really have much of a shot, but I definitely wanted to end it on a high note for the team. We were able to do that. Stoked to finish the whole season off with a podium.

The graphics you guys used today, you seemed pretty happy with. They looked really, really cool. Was that influenced by you guys on the team, or was that the team’s decision to run something like that? It must have been pretty special to have a graphics kit like that for today.
Yeah. I think we had a big plan coming in for the 9/11 race to do something special like that. That was actually my Des Nations setup with the 17. So, we had it and after the meeting went down and I was like, I want to represent this bike and the country, so can we try to do something for the last round? I was stoked on that. We actually had some custom Fly gear made that I wasn’t able to run today, but we had a sick setup for that. There were a lot of things coming together that would have been cool to show off, but we didn’t really have the shot. Just to have that bike this weekend was sweet.

Looking back over the course of this season, there’s no doubt you’ve had the speed to run up front, a lot of podium results. How would you rate the season for you, considering your sickness and that sort of thing? It’s been a pretty good one. You’ve had a lot of airtime.
I came into the season a little bit behind, just from my injury from supercross. The plan all along was get through those first couple rounds out west and get it going there when we come east to High Point. That was exactly what we were doing. We set ourselves up for a moto win. I had two laps left at High Point. That was very deflating to have the chain snap with two laps to go after one of my best motos that I’ve had. Then of course you have Red Bud, but it wasn’t great. I broke my thumb there. But like you said, I had 11 or 12 moto podiums this year and scored my most points, so can’t be disappointed too much. Just stoked on what we showed and was able to finish it off. That was a big one to finish the whole season and we did that, so I was happy with that.

Watch the full interview from the 250 Class post-race press conference below: