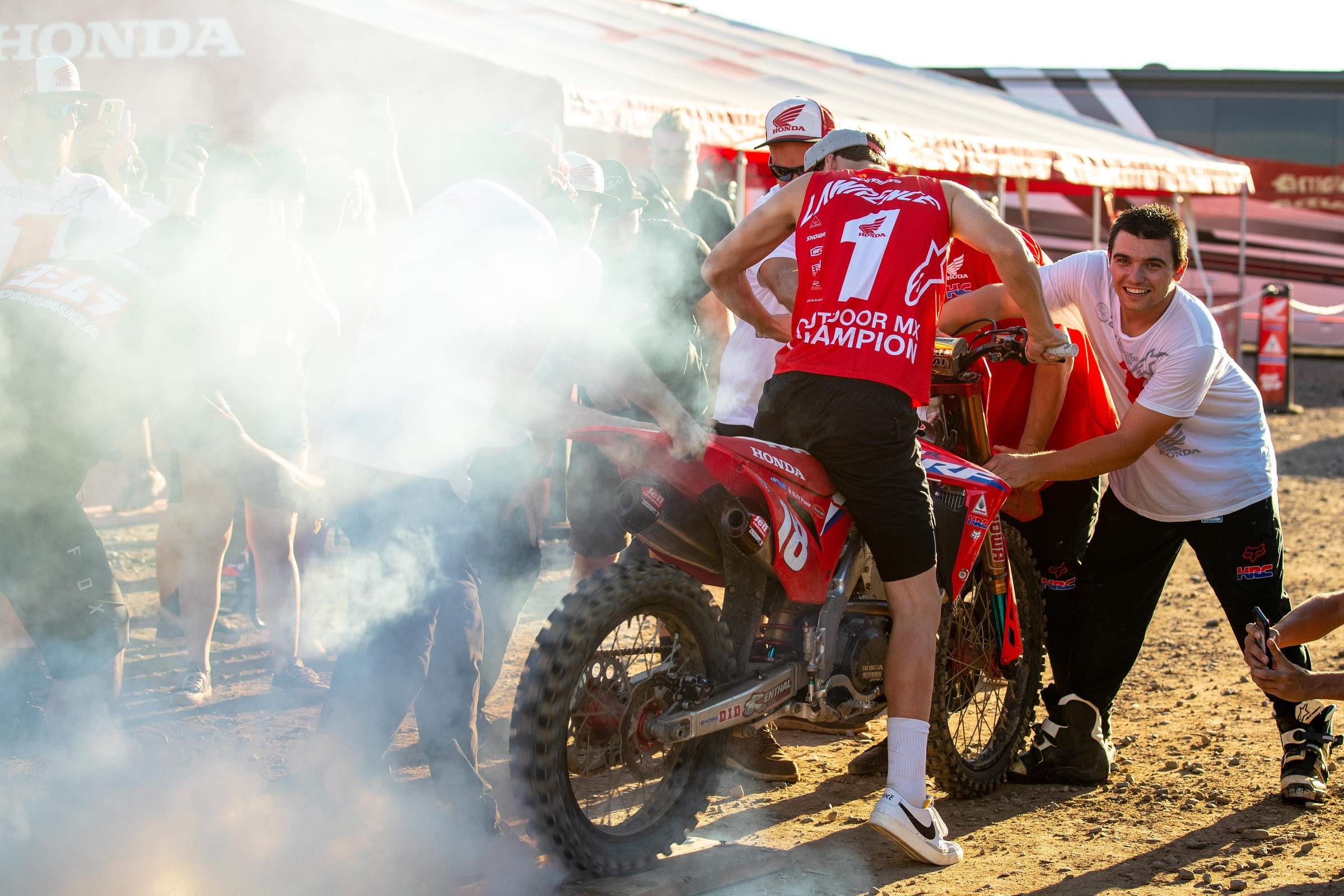 The Conversation Jett Does It

Honda HRC’ s Jett Lawrence entered the final round of the Lucas Oil AMA Pro Motocross Championship with a 23-point gap over Monster Energy/Star Yamaha Racing’s Justin Cooper. Lawrence had the opportunity to wrap up the title by the end of the first moto as long as he finished ahead of Cooper. Well, when the gate dropped, Lawrence made the finale a little more exciting than he would have liked. While Cooper started in the top three and quickly got to the lead and did what he needed to do—focus on himself and win—Jett ran into issues, crashing twice and finding himself outside of the 25 early. Eventually, he managed to make a last-lap pass on Cooper’s teammate Jarrett Frye in order to finish the moto eighth. It all came down to the final moto as Lawrence had an 11-point lead.

Jett had to get a seventh or better in the second moto but once again Cooper got a great start and then ran away with the moto win as Lawrence found himself on the ground early. However, the 18-year-old Honda rider was able to regroup from the mistake and pull of a third-place finish, claiming the title by six points over Cooper. Lawrence claiming the title means he became the first Australian to win the 250 Class Lucas Oil AMA Pro Motocross Championship title. After the race, Lawrence spoke with the media via Zoom.

Jett, what didn’t happen today? Was it nerves or was it just bad circumstances and things going wrong? What was the problem? It obviously didn’t go as smoothly, I’m sure, as you were hoping it would go?
Jett Lawrence: I’ll tell you what didn’t happen. I didn’t ride good at all. I sucked today. Practices were good. First moto start I was sleeping. Riding way too fast for the track and rushing stuff. Just being stupid, really. But, thankfully got a bit of a blessing of coming up to eighth and then obviously finishing third in the second one which thankfully wrapped it up. It was not looking pretty after that first one.

Congratulations, first of all. Can you take us through the feeling, the emotion and everything when you crossed the line and knew that you had the championship?
The feeling when I went across the finish line was my body was dying. That’s the actual feeling. It was cool. I don't think it’s actually really sunk in yet, realistically. I think tomorrow once I wake up and kind of actually process everything… I’m still trying to process everything right now. Once it really sinks in, I think I’ll actually believe it but I’m still dreaming right now. it was really cool to wrap it up and finally get to have a break after this weekend.

I wanted to ask you about in that second moto when you had the little tip-over up the back of [Max] Vohland, and then you picked it up and instead of panicking it seemed like you almost immediately settled into a pace you were comfortable with. What was your mindset at that time and how difficult was it to almost settle down?
My mindset when I crashed is going, "You’re really sucking today on dirt bikes." But normally I’m like, just get up as quick as you can and put on a charge. Thankfully I just made sure I didn’t over-ride the track, because the track was pretty rough. So I just had to make sure I don’t overdo the track and make any other stupid mistakes. I kind of got a flow and just relaxed. Just made my way through up to third. It was a lot better than the first moto. That’s for sure.

Moto two on the start, you decide to start next to Justin Cooper. Was that an idea you guys had? Was that deliberately? Why did you start right next to Justin in moto two?
It was kind of like it was a decent gate and everyone knows he’s a great start. So, why not? If I get not a bad jump just go in behind him. Starts definitely didn’t really work. Just thinking if something happens. Have a go-to plan.

I would like to know a little bit about what the mood was like at the truck in-between motos and what kind of strategizing you guys did and what was talked about and that kind of thing.
After the first moto I was definitely pissed. I was not happy at all. Was not a happy chap. Going into the second one, the mental thing was just go out there and do my job. I’ve been putting in a lot of work and I felt like I definitely deserve what I’ve done so far.

Is there anything that stands out to you that you might have taken away as a learning lesson from this season, anything specific that jumps out at you?
I think mainly just the mistakes. That’s the main thing, I feel like learning is taking away those silly mistakes that are uncalled for really and definitely don’t want. So, obviously there’s always room to improve. So, we’re going to probably go back and study up. Johnny’s probably going to find out what I sucked at and crack the whip on me in the off-season to get me back to my top shape and good for next year.

Looking back on the season in terms of just some time for reflection, any stand-out moments for you on the path to this championship? Or have you thought much about that?
No. I haven’t really processed the season quite yet, but I’ll probably go down and watch some races and see what I wasn’t good at and see what other riders are good at, and kind of process everything with Johnny, my trainer, and the rest of them.

Congratulations. Big money for winning the championship, bud. What are you spending it on? What are you going to splash out on?
Luckily, I have a really good group around me. I’m probably going to buy a house because I really need to get a house. If not, the prices in the stock market right now are super high, like a hundred grand over actual pricing. So, who knows? We might go invest in a car wash or invest in something else that will eventually give money back to me. So far, probably just investing with all the bonuses.

I want to talk about those Australia roots. I was going deep into your archives on Instagram from six, seven years ago. I even saw pictures of you I think when you were first leaving Australia. I know a lot of that was led by your brother, who was a couple years older than you. When you left to go to Europe did you think, Eventually, I’ll be a champion at the highest level? Did you even have a clue that that would be in the cards, or were you just going to do whatever your family said you should do?
Since the time we moved over, it’s like I didn’t come over here for nothing. I’m going to come here to do one job and that’s win a championship and hopefully put in the work. Since then I’ve just really been working my ass off to get to where I am today. Thankfully, it has all paid off. There were a lot of years we put into this. Just like last off-season I’m like, I’m going to train hard now. It’s been a long, upcoming trail to this.

Watch the post-race coverage from Saturday.

What kind of sacrifices? You have to have a lot of mates, I’m assuming, that you had to unfortunately not get to see anymore, because you had to leave your home behind.
Yeah. For a young kid, that was really hard. I had my best mate in Aus, and we were like brothers. We did everything together. It was hard to leave. Luckily, we have technology so we can FaceTime each other now. They come over every now and then to visit. We were planning on going back to Australia this year for the AUS-X Open and seeing them again, but with all the pandemic and stuff and them locking down, I don't think it’s looking like it’s going to be possible right now. But it was definitely hard as a kid being that young, but we wanted to succeed and if that’s a thing we have to take it away, we’ll take it away.

You’re the first Australian 250 champion in this series. I think you’re the youngest to win it since Ryan Villopoto since 2006 as well. I’m just kind of curious how almost surreal it is to look back and see some of these boxes that you’re ticking at such a young age in your career already.
It’s obviously cool to have my name out with RV in the same sentence. He’s obviously a legend and a sick lad. But, like I said before, I don't think it’s really sunk in quite yet. Once it does I might be like a little schoolgirl excited and that stuff. It’s definitely cool to be the youngest Australian to get it. You said the only Australian? To be an Australian to win a championship over here in the 250 class is obviously awesome. Hopefully I can keep this going for the rest of my career here.

We spent a lot of time back here in Australia at a lot of these series that you grew up and dominated at, and we just find ourselves surrounded by kids who want to grow up and follow the footsteps of what you’ve done. If there was three things that you could tell these kids back here in Australia that are rooting for you every day, what are three things you’d give them?
One would be work hard. That’s obviously number one, the main thing. Put in training. Two would be don’t click faster than the clock ticks. I learned that from Stefan Everts. He would always tell Hunter because you want to go fast now. It’s a very smart thing to say because actually it’s pretty true. Don’t rush your time. Just take it step by step and learn. I think three is just listen and learn. You can get the best guy telling you what to do, but if you don’t listen it’s not going to work. So, just listen when someone gives you information that knows what they’re doing.