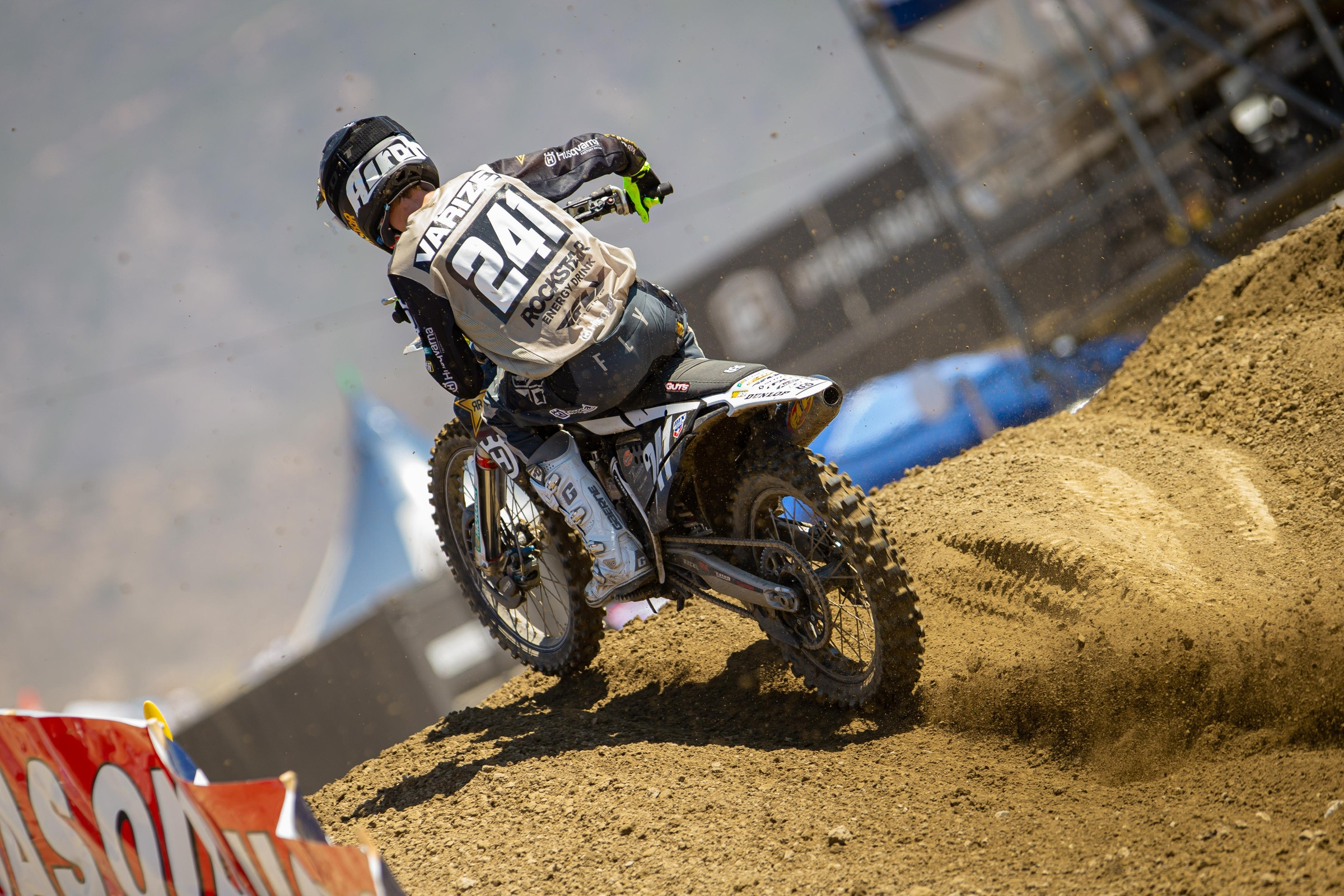 Long-time pro Jason Thomas was dialed in during Saturday’s Fox Raceway 2 National to catch all the action from round 11 of the Lucas Oil AMA Pro Motocross Championship. We fired off some questions and here’s what he saw.

Justin Cooper was better this weekend—but Jett Lawrence was just unstoppable. Jett has claimed eight moto wins this season, but more importantly, the last four motos in a row. Talk about his performance down the stretch here when it really mattered.

Jett has certainly upped his game, but it seems like Justin Cooper has also lost a step. They have gone in opposite directions down the stretch and the championship is being decided accordingly. If you look at Justin Cooper’s first motos at both Unadilla and Budds Creek, everything seemed great. His second motos were a bit of foreshadowing for what was to come, though. Ironman was a rough day all around and he backed that up last Saturday with another underwhelming day at a track he should be better on. Pala is a regular practice track for Monster Energy/Star Yamaha Racing so one would think JC32 would be good there. Jett Lawrence is just better.

What makes Jett so good at this track? (I’ll spare the name for you)

It’s difficult to define but I believe Jett shines when conditions are difficult. On easier tracks with great traction, I don’t feel Jett’s elite skill set is as lethal. He finds ways to go fast when most can’t. Pala is a very difficult track, especially in conditions like Saturday brought. When the difficulty level ramps, Jett does, too.

Will Jett wrap up the title early next weekend?

He certainly could but it depends on how he handles the day. If he puts it in total cruise mode, I could see Cooper or Michael Mosiman running away with a win, pushing it to the second moto. If he is able to put the pressure out of his mind and ride to his ability, he will wrap this thing by 2 p.m. local time.

What was it that made Michael Mosiman so good Saturday? (Leading, crashing, but catching fire again afterwards)

I think Mosiman is one of the best riders in the class. That’s just where he’s at in his maturation process. Further, he rides these California tracks very well. I also believe his confidence level is the highest it’s ever been. He believes he should be winning. That’s half the battle.

Josh Varize has his best day as a pro finishing 9-9 for eighth overall in the first of his two races with the Rockstar Energy Husqvarna team. We also hear Varize was making strides in his nutrition recently, which could help his results. How much is the bike and team (having an actual mechanic) and how much is Varize improving himself?

I was very impressed with Varize. When a rider gets an opportunity like Varize did, seizing it is everything. Make the most of that chance. It sounds easy but not everyone can do it. When you look at Varize’s day, 9-9 is great but the riding was much better than the results indicate. He was battling inside the top five for a long while in both motos. He didn’t give an inch to riders like Jo Shimoda, RJ Hampshire, and Austin Forkner. He wasn’t intimidated and looked the part. Great job all around and I hope someone gives him a real shot in 2022.

Eli Tomac went full beast-mode again. At one point in moto two his lap time was seven seconds faster than the remainder of the field’s fastest laps and he won by over 44 seconds (yes, Dylan Ferrandis was in championship celebration mode already but still). How?!

When conditions are difficult and Eli Tomac is clicking, everyone else is in big trouble. A tough track also widens the gap between the elite and middling riders. If you watched Tomac closely, he wasn’t hesitating on corner entry. He was allowing the motorcycle to flow into and through the corners and then attacking the following straightaways. Most of the riders looked like they were riding a treacherous track very cautiously. Tomac was attacking it without much regard for how difficult it was. That was vintage Tomac.

Although later than expected, how big are these two overall wins for Tomac to finish the year—and his time with Kawasaki—strong as he starts to look ahead to 2022?

I think these rides are important for Tomac mentally. Going into the off-season with momentum and confidence makes for a much more productive break. He will believe he’s “back” and ready to win in 2022. The questions that he may have been asking himself at Thunder Valley will seem like a distant memory. His confidence will likely be fully restored.

For Monster Energy Kawasaki, I don’t think it’s a big deal. They won a bunch of races and both titles. They accomplished the goals they set out to conquer. I highly doubt they are happy about losing their multi-time champion, but worrying about things you can’t change is a huge waste of energy. They will turn their focus to getting AC9 on top in 2022 and welcoming Jason Anderson to the fold.

Dylan Ferrandis was able to wrap up the 450 Class title in his rookie season through pure domination but also consistency on his bad days. How impressed were you by the #14 this year? Did you see this coming at all?

Impressed isn’t really a fair description. He was so much better than anyone would have guessed. He had it all this summer: speed, fitness, consistency, confidence, and resiliency. He won the series with a race to go! It wasn’t a season where everyone was hurt, and he backed into it. He beat the best America has to offer. He deserves a ton of praise for this performance.

Ken Roczen and Eli Tomac skipped their podium interviews to recover for the second moto. It was pretty hot last weekend in Indiana, but it was over 100 degrees in California. How much of a difference is riding in the humidity of Indiana compared to just straight heat in California?

They are both taxing but in different ways. The humidity is a matter of hydration, avoiding cramping, and staying out of the heat (to avoid sweating even more). If you are properly hydrated, a humid day can be managed. Difficult? Of course. But these guys ride in the humidity every day in Florida (most of them, anyway). I think it’s more about preparation for humid days. If you have practiced in humidity and are serious about hydration, you will shine on days like that.

For a day over 100 degrees, it’s very challenging to not overheat. Your body temperature naturally rises because of the temperature you’re subjecting it to. You can prepare all you want but how your body responds to that boiling sun is anyone’s guess. I think the incredibly high temperatures are more challenging because it’s not something that riders face daily. Rider bodies are not typically subjected to extreme heat so the reaction to it is less predictable. High temps in Florida are usually in the low 90’s, even if the humidity is much higher. Adding 10+ degrees to that can have undesired effects.

The most brutal days come when you get both variables. I have raced a few nationals in the past that I will always remember. Troy 1998, Hangtown 2000, Southwick 2005, and Freestone 2007 were all scorchers. Temperatures were approaching 100 (Hangtown was around 110) and humidity was through the roof. Several riders had heat strokes on those days, proving just how difficult it was. At Troy, I can remember riding past riders laying face down in the dirt because they had simply passed out mid-moto. At Southwick, New Mexico’s Keith Johnson had a medical emergency in the middle of the race. Chad Reed also went so far as to shave his head in between motos. I had my own issues, too. I was so overheated after the first moto, I laid under a water hose for 15 minutes trying to regain my balance.

When you think about what you’re asking of your body, it’s not surprising. Put on socks, knee braces, a long sleeve jersey, long pants, heavy duty gloves, boots, a chest protector, a helmet, and goggles. Now that you have next to zero air flow on your skin, go exert yourself at 100 percent effort for 35 minutes straight. Further, do that while atop a motorcycle putting out crazy amounts of heat. You’re also not allowed to stop for water during that torture test. That doesn’t seem problematic. At all.