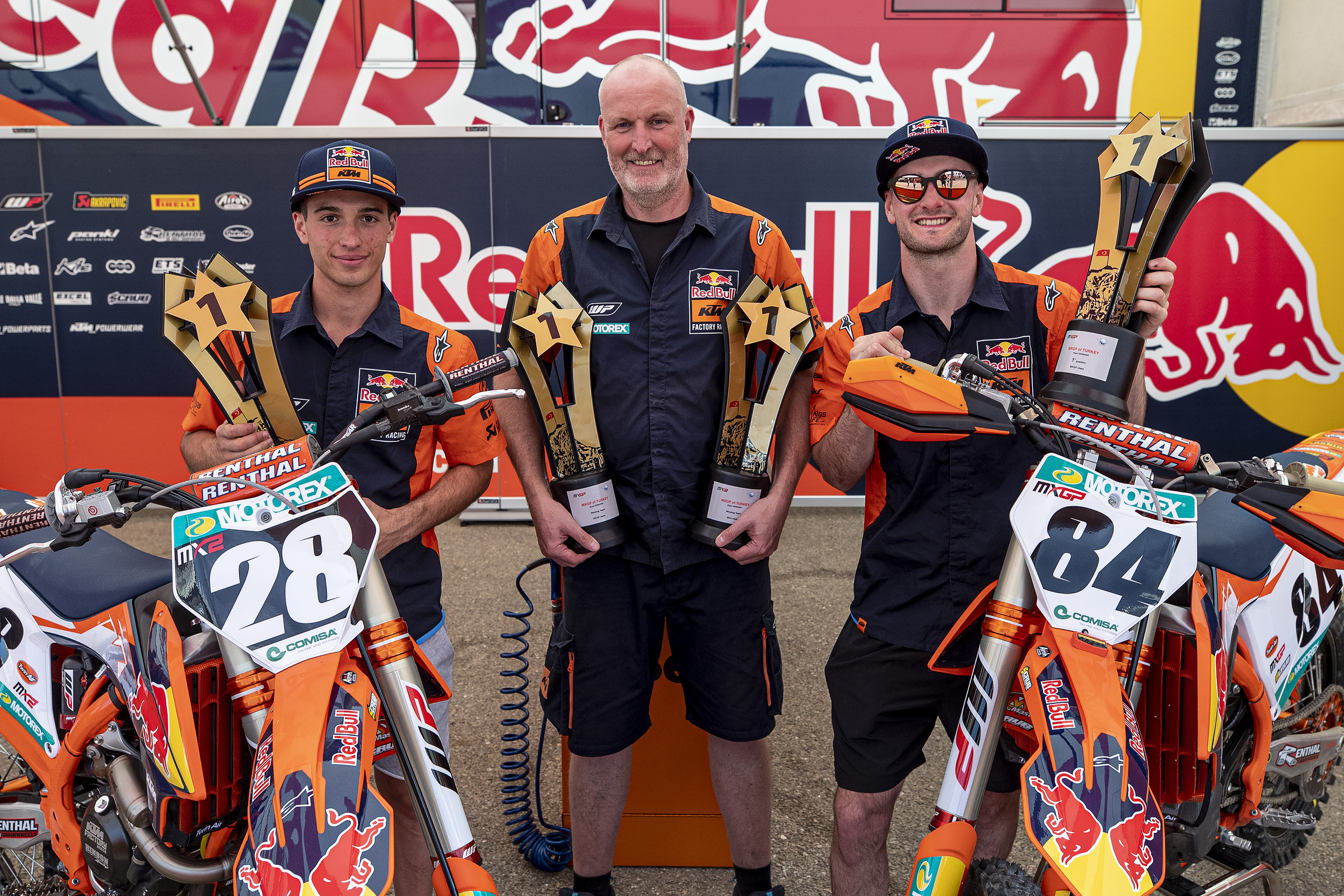 GP Report Viewpoints From the MXGP of Turkey

MXGP already feels very late. On the first weekend of September in Turkey the championship reached round eight of an 18-round calendar that is expected to change once more and see the overseas events in Argentina and Indonesia postponed to 2022. Whether the series can make those 18 dates by the time winter draws close-in is up for debate, and more double and triple-headers—such as the schedule alteration that saw the expansive circuit of Afyonkarahisar in Turkey stage the first Sunday/Wednesday double of 2021—are on the horizon.

The Bitci Grand Prix of Turkey brought MXGP back to action after almost a month. The gap arrived because of the late cancellation of the Finnish and Swedish events and displayed just how temperamental international sport remains during the European embers of the pandemic’s delta wave. It’s the ongoing instability around travel, quarantines and restrictions that meant the recent news around Team USA’s withdrawal from the forthcoming Monster Energy FIM Motocross of Nations was no great surprise to the MXGP paddock and those people having to deal with cross-border hassles and administration on a near-weekly basis.

The MXGP hiatus allowed another mini ‘reset’ with certain riders benefitting from time to allow injuries to heal and issues to rectify. A case in point was Red Bull KTM’s Tom Vialle. The defending MX2 World Champion vanquished the opening round in Russia, broke his right hand in a freak training collision with Roan Van De Moosdijk and was then playing catch-up through a period of six GPs in seven weeks. His 1-2 in Turkey was very much along the lines of the ‘Vialle’ seen at Orlyonok in June.

Others struggled as a consequence of the break. The fast and rippled Afyonkarahisar hard-pack caused more than one case of arm-pump.

The last time Afyonkarahisar welcomed Grand Prix was in 2019 where it was the penultimate race of the season. The combination of that memory and the approaching autumn made it easy to forget that MXGP has yet to touch the halfway point. The over-riding feeling from round eight of 2021 was how wonderfully open and close the championship currently is. However, the campaign is not on the home straight and—as the riders like to continually remind us—there are plenty of laps left to run.

In contrast to the 450 Class Lucas Oil AMA Pro Motocross Championship contest and the final ebbs of a long year of SX and MX, MXGP is still relatively fresh and that is helping with the parity, and the inability for a single athlete to fix a steely grip on the competition. Double World Champion Tim Gajser has held the red plate from round one, but four other riders have won from the eight Grands Prix and the points gap down to Jeffrey Herlings in fifth is a paltry 36. The top five from the last event in Latvia was the same top five that filled the standings in Turkey, but with a different order (only Monster Energy Yamaha and Rockstar Energy Husqvarna have to do better and get their riders into the mix). In contrast to 2020 where Gajser was the standout racer, his second moto success at Afyonkarahisar on Sunday was his first checkered flag since round two in the UK. The HRC man was 6-1 in Turkey and where mistakes and misfortune for the likes of Tony Cairoli, Romain Febvre, and Pauls Jonass keep churning the tombola of points.

Attrition is bound to whittle away at the breakaway quintet, those being: Gajser, Jorge Prado, Febvre, Cairoli, and Herlings, but the Dutchman is arguably the danger-man among the gaggle. The GP winner (his second of 2021) said after the race that he has already used his “joker card” with the blameless shoulder fracture sustained at his home GP in July that cause him to miss three motos, but he has not wasted any time in recouping points and chipped another seven away from Gajser on Sunday afternoon. Herlings has more podiums and moto wins than anyone else so far and his ability to post a 1-2 despite mediocre starts hints at his competitiveness. The big ‘if’ for the Dutchman involves avoiding more physical problems and the kind of fragility that has seen two incomplete seasons in the wake of his peerless 2018 domination.

- Afyonkarahisar, aside from being a mouthful, has not always been easy for Red Bull KTM management’s blood pressure. It was here in 2018 when the collision between teammates Pauls Jonass and Jorge Prado ultimately decided the MX2 championship as the Latvian suffered a knee injury. In 2019 Jeffrey Herlings pursued Glenn Coldenhoff with such vigor on his return from a second broken foot that more than a few fingernails were chewed and tears shed as “The Bullet” won once more after a year of trauma and self-doubt. Last Sunday both Herlings and Prado were part of a three-way dispute that also included Tony Cairoli for second place in the second moto. Cairoli and Prado came close to contact before Cairoli then committed to a jump into a lefthanded corner where some haybales had been knocked into the line. The veteran crashed but picked up to finish fifth for fifth overall. “It was pretty sketchy watching Tony and Jorge…but I was able to pick up the pieces,” said Herlings who had kept a distance but then moved past Prado on the last lap for second. Cairoli was disappointed to extend his run of races to three without a trophy but was luckily to escape unhurt from an impact to his head and shoulder.

Watch the Cairoli vs Prado battle (and AC222's eventual crash) below.

- Watch out for Prado. The 20-year-old now has seven top-three moto finishes from the last ten and is the rider who has led the most race laps in 2021. He also acquired two more holeshots in Turkey to improve his total to seven for the season. The Spaniard only has two moto wins but if he can stretch the laps all the way to the flag in what is only his second term on a 450 then MXGP will have a new clear favorite.

- Afyonkarahisar was an edgy prospect that invited high speed, limited line choice, and punished small mistakes. One of the most spectacular sights was Pauls Jonass. The Standing Construct GasGas rider was fantastically fast in the first moto to secure third position. He then got out of shape in the right-hander past the pits in the second, unwillingly grabbed a handful of throttle and disappeared through the Alpinestars advertising boards. The 24-year-old was banged-up but thankfully unhurt. “It was a wild one,” he said.

- The long trek to Afyon involved a 250-mile drive east from Istanbul airport but the trip was given more validity thanks to the added ‘Grand Prix of Afyon’ on Wednesday. The extra date didn’t lower the costs of the journey or ease the inconvenience of facts like Turkey’s status on the UK’s ‘red list’ (meaning a compulsory hotel-based quarantine upon return to the value of several thousand dollars). The entry list took a hit as a result and just 25 runners made the MXGP gate and two less in MX2. A similar figure made WMX where world champion Courtney Duncan seized a narrow win over Kiara Fontanesi.

- In MX2 Tom Vialle announced his comeback to race-winning pedigree. The champion is 134 points away from countryman, Monster Energy Yamaha’s Maxime Renaux, at the top of the standings but could have a big say in the remainder of the moto wins in 2021 and is 82 points from third place in the table. Vialle’s absence from Grands Prix in Britain, Italy and Holland punched an irreparable hole in his title defense.

- Maxime Renaux’s recovery from an error-strewn run to fourth in the first moto was corrected by a much more accomplished display in the second. Aside from this unshakeable form that has seen him present on all but two of the podiums in 2021, Renaux’s strength and confidence means he has been the exceptional athlete of MX2 so far and looks the most likely to fit into MXGP for 2022. Renaux’s emergence through the past two-and-a-half seasons is yet another luxury for his country and on a weekend where another Frenchman ruled the AMA 450 Class, as Dylan Ferrandis clinched the Pro Motocross title one round early.

- In terms of nationalities, Australia might lack presence in the MXGP class (HRC’s Mitch Evans is still not fit to return after a lengthy wrist problem) but they are strong in the 250s, on both sides of the Atlantic. In MX2 Jed Beaton combined reasonable starts—something which has been an Achilles heel in his final term in the class—with regularity for his second podium of 2021 on the Rockstar Energy Husqvarna. Beaton was being fiercely hunted by impressive rookie Mattia Guadagnini, but the Italian made a mistake with two laps to go, and the Aussie’s third place was enough for the same overall rank. Bike-It Dixon KRT’s Wilson Todd was also prominent in the top ten.