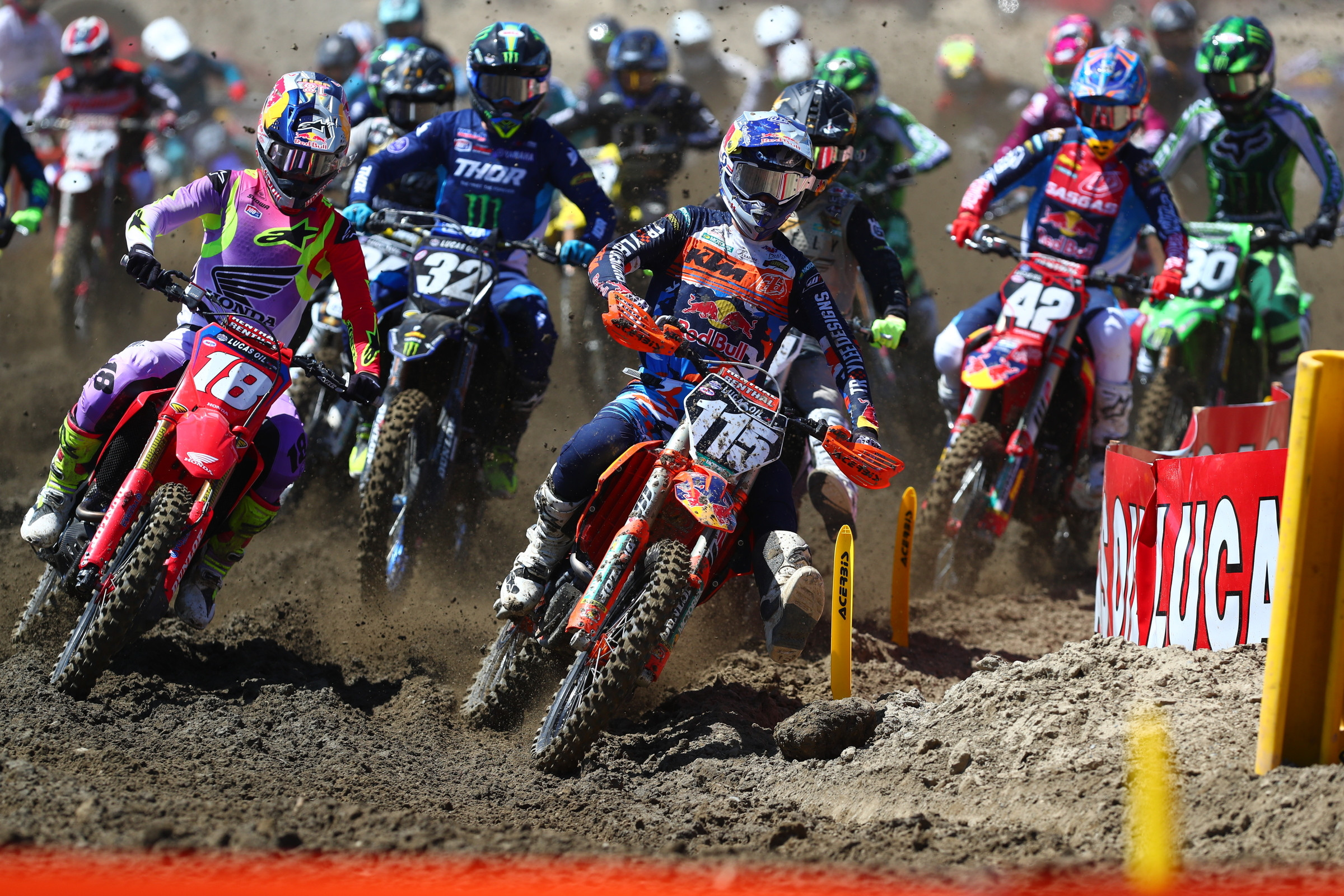 As the first gate drop of the day commenced at Fox Raceway, temperatures were pushing 100 degrees at Pala and the riders were going to be laboring without question. The metal hit the dirt and we were off with 250 Moto 1 which saw Red Bull KTM’s Max Vohland jump out to the early race lead. It wouldn’t last long though as Troy Lee Designs/Red Bull GasGas rider Michael Mosiman passed him in the third corner and took off with the lead.

Vohland had to deal with pressure from Jett Lawrence right away as the Australian caught him immediately for second place. Lawrence spent three laps behind Vohland but found a way through a couple corners after the finish line jump to set sail after Mosiman out front.

Justin Cooper sat just inside of the top 10 as his starts have seemingly disappeared late in the season. With Cooper now sitting 11 points down on Lawrence, he needed a huge effort to ride through the field and get to Lawrence who was working on catching Mosiman for the lead.

Lawrence caught Mosiman near the halfway point of the moto and started to put a little pressure on the #42 machine. Mosiman handled his well though and kept Lawrence at bay for a while, until an untimely mistake before the mechanics area sent him to the ground and back to fifth place.

From there, Lawrence took off with the lead over new second-place man RJ Hampshire who sat over 10 seconds behind him. Mosiman recovered very well and quickly too as he worked around Jo Shimoda and Max Vohland quickly and found himself on Hampshire for second with five minutes to go. He then passed Hampshire and ran away from second from there.

Cooper did make some amends throughout the moto as he was initially passed for seventh by Hunter Lawrence but would eventually re-pass him, Joshua Varize, and Max Vohland to work his way up to fifth in the end. It was enough to only lose nine points when it could have been much worse, but it still was not what he needed in the midst of a championship fight.

Jett Lawrence out front cruised it home in the final few laps to put a bow on a first moto victory. The win now provisionally extends his championship lead out to 20 points over Justin Cooper with just three motos left in this championship. Behind him was Mosiman and Hampshire to round out the championship.

Next up was the first 450 Class moto of the day which saw Ken Roczen do exactly what he needed to do off the start by grabbing the holeshot. In tow with him early was Cooper Webb and then a good start out of Dylan Ferrandis saw him in third.

Eli Tomac found himself a little further back in the early runnings, but it wasn’t long until the three-time champion worked up to Max Anstie for fourth. After a good battle between the two for several laps, Tomac made it into fourth place but had already lost about eight seconds to the leader by that point.

Meanwhile, up front, Dylan Ferrandis found his way through on Cooper Webb to get into second place and set his sights on Roczen out front. Seemingly in no time at all, Ferrandis was on Roczen for the lead and through at the halfway point. With the simmering heat, Roczen appeared to be struggling a bit with the temperatures, but he settled in behind Ferrandis and tried to keep the Frenchman close.

The battle for third then wicked back up as Cooper Webb slipped into the grasp of Eli Tomac catching him from behind. Tomac was running similar pace to Ferrandis while Roczen and Webb fell off a bit and caught Webb within a few laps of passing Anstie. Once Tomac caught up to Webb though, Webb seemed to find a second wind and held Tomac behind him for a while.

Finally, Tomac made his way around Webb into third with about four minutes left in the race after Webb got caught out behind some lapped riders. The towel might have been about to wave from Webb anyway as he immediately fell five seconds off Tomac on the very next lap.

Tomac continued to charge hard throughout though and caught Ken Roczen for second place with two minutes to go. Within an instant, Tomac was through and into second place. He still sat 10 seconds down of Ferrandis with time about to expire though, but it didn’t seem to matter to Tomac who laid down the fastest lap of the moto right as he passed Roczen.

Roczen tried to stay with Tomac but then appeared to be laboring badly with two laps to go and Cooper Webb instantly caught him as Kenny just cruised around for a couple of corners.

Dylan Ferrandis claimed the first moto win out front as he took a massive step towards clinching the title today. Tomac finished second ahead of Roczen but both riders rode straight back to the truck and skipped the podium. The heat today is certainly getting to guys out there.