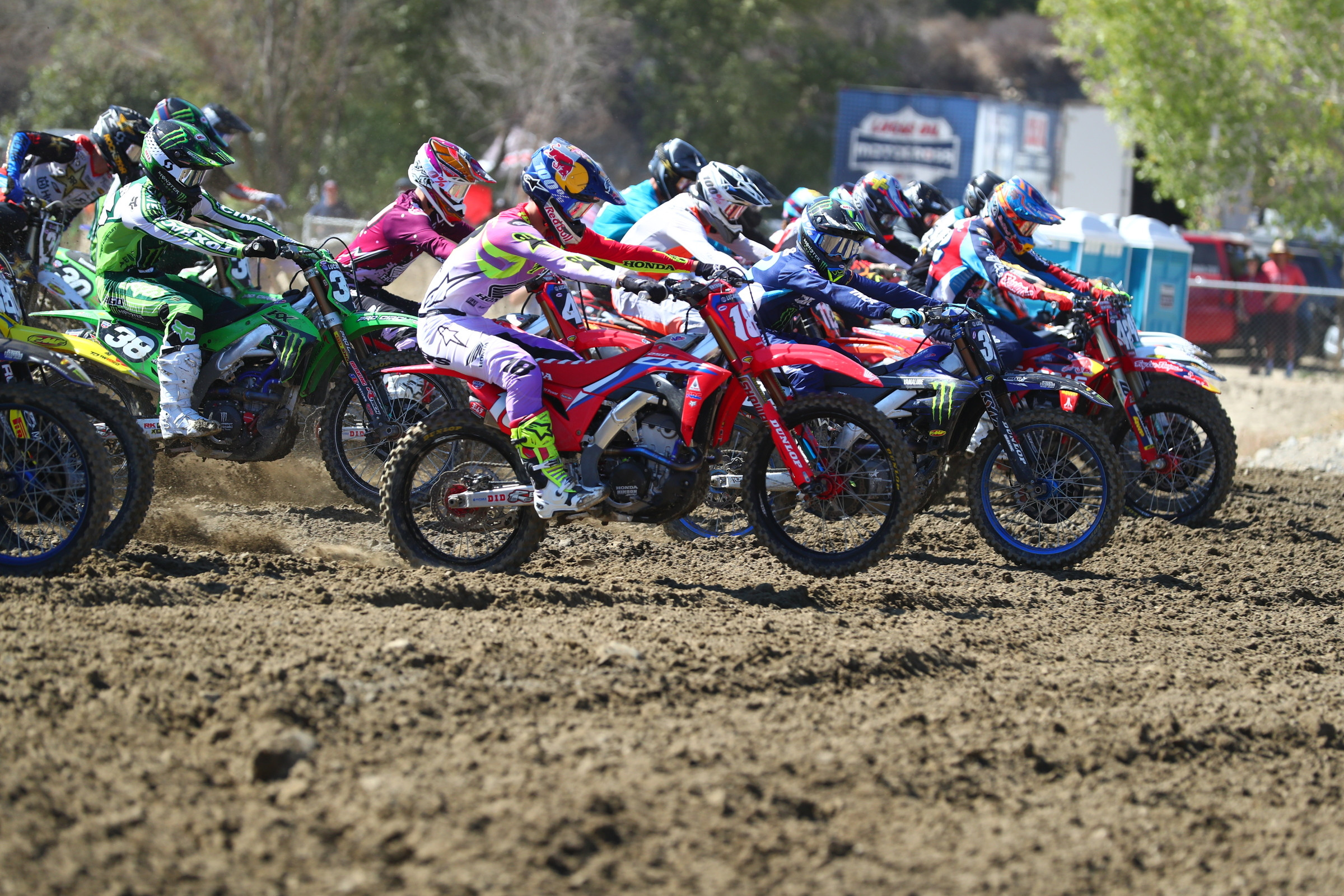 Things got a little strange right as the second 250 Class moto was set to get underway at Fox Raceway as the 30-second board went sideways and the gate refused to drop. It slightly flinched which caused half the gate to hit it and then never fell. The gate had malfunctioned, and everyone backed off the gate as crews ran in to fix it. Eventually it was fixed, and we were ready to race in the second moto.

This time, the gate fell like normal, and it was Jett Lawrence who shot out to the early lead. Behind him early one was Michael Mosiman with a better start from Justin Cooper putting him up in third early on. Cooper was giving Mosiman a lot of pressure early on in the moto, but Mosiman surged ahead and put a decent gap on Cooper by the halfway point.

Lawrence was out front just pulling away with relative ease from the field. For Lawrence, a win in this moto would be his second 1-1 performance on the trot and these results have come at a crucial stage in this championship. With half the moto left, Lawrence was fully in control out front.

His brother Hunter Lawrence was having a better moto the second time around as he was up in fourth place through the entire first half of the moto. Coming from behind him was Jo Shimoda and Austin Forkner who had battled around Joshua Varize early on to get into fifth and sixth, respectively.

Cooper found a second wind with about 12 minutes remaining in the race as he started to reel in Mosiman ahead of him for second place again. Both riders were still running similar pace to what they were doing early in the race, but Cooper was just a bit better, and he found a quick way around Mosiman to get back into second place with 10 minutes to go.

With a 10 second deficit to Lawrence ahead of him, Cooper had quite a challenge ahead of him if he were going to run Lawrence down for the lead. The points he could get away from Lawrence in this moto would be crucial as he would go from provisionally 23 points down to 17 down with two motos left. The reigning 250SX West Champion put the hammer down and tried to make it happen.

It didn’t seem to matter that Cooper had upped his pace though as Lawrence just slightly upped his pace to maintain the gap. This track has always suited Lawrence well and it seems like it was suiting him quite well today as he did well to conserve energy with the lead and ride smooth the rest of the race.

Jett Lawrence cruised to his fourth straight moto win and his third overall win in as many tries at Fox Raceway. The win pushes him to 23 points ahead of Cooper who still came home second ahead of Jo Shimoda in third.

The second 450 Class moto saw almost a repeat off the start but the front two were swapped this time. Cooper Webb snagged the holeshot from Ken Roczen with Dylan Ferrandis right there in third. Webb officially led the first lap, but Roczen got around Webb before they were even halfway around the track.

Dylan Ferrandis appeared like he knew Roczen getting into the lead that quickly was going to allow him to sneak away so Ferrandis quickly passed Webb and suddenly found a way through on Roczen as well just a few corners later. The Frenchman then immediately pulled out a three second advantage on Roczen.

Behind them, Eli Tomac was also on an early charge, and he quickly moved around Cooper Webb to get into third, but he was far from done. Within two laps, he was on Roczen for second and a small mistake from the German allowed Tomac through before even 10 minutes of the moto were done.

Right away, the focus turned to whether Eli Tomac could run down Dylan Ferrandis for the win. If Tomac could get Ferrandis, he would win the overall, but Ferrandis would claim the title even with a second-place finish. So, would Ferrandis fight to win the race or would he back off to think more about the championship in this scenario?

That question was answered moments later as Tomac caught and passed Ferrandis just before halfway through the second moto. Ferrandis didn’t put up much of a fight and it was clear where his mind was as Tomac sprinted away ahead of him.

Meanwhile, Ken Roczen was fading back, and Cooper Webb snuck around him right around the same time that Tomac went to the lead. It appeared very likely that a championship was headed to Dylan Ferrandis when the checkered flag waved.

Tomac continued to pull away out front while Ferrandis managed his effort from second place. Roczen’s downward slide continued as Christian Craig then caught and passed Ken Roczen for fourth place. Craig was in line for his best result of the season as he also seems to gel well with the Southern California soil.

In the end, Eli Tomac won the battle at Fox Raceway going 2-1 for the overall, but Dylan Ferrandis won the war. Dylan Ferrandis captures the 2021 Lucas Oil Pro Motocross Championship to become the second Frenchman ever to do so in the premier class, joining Jean-Michel Bayle in 1991. It was a monumental occasion for Ferrandis and for Monster Energy/Star Yamaha Racing who took over the Factory Yamaha 450 Class effort for the first time this year. Ferrandis also claimed this championship in his rookie year in the 450 Class along with clinching it a round early. An incredible season for Ferrandis, and a deserving champion.