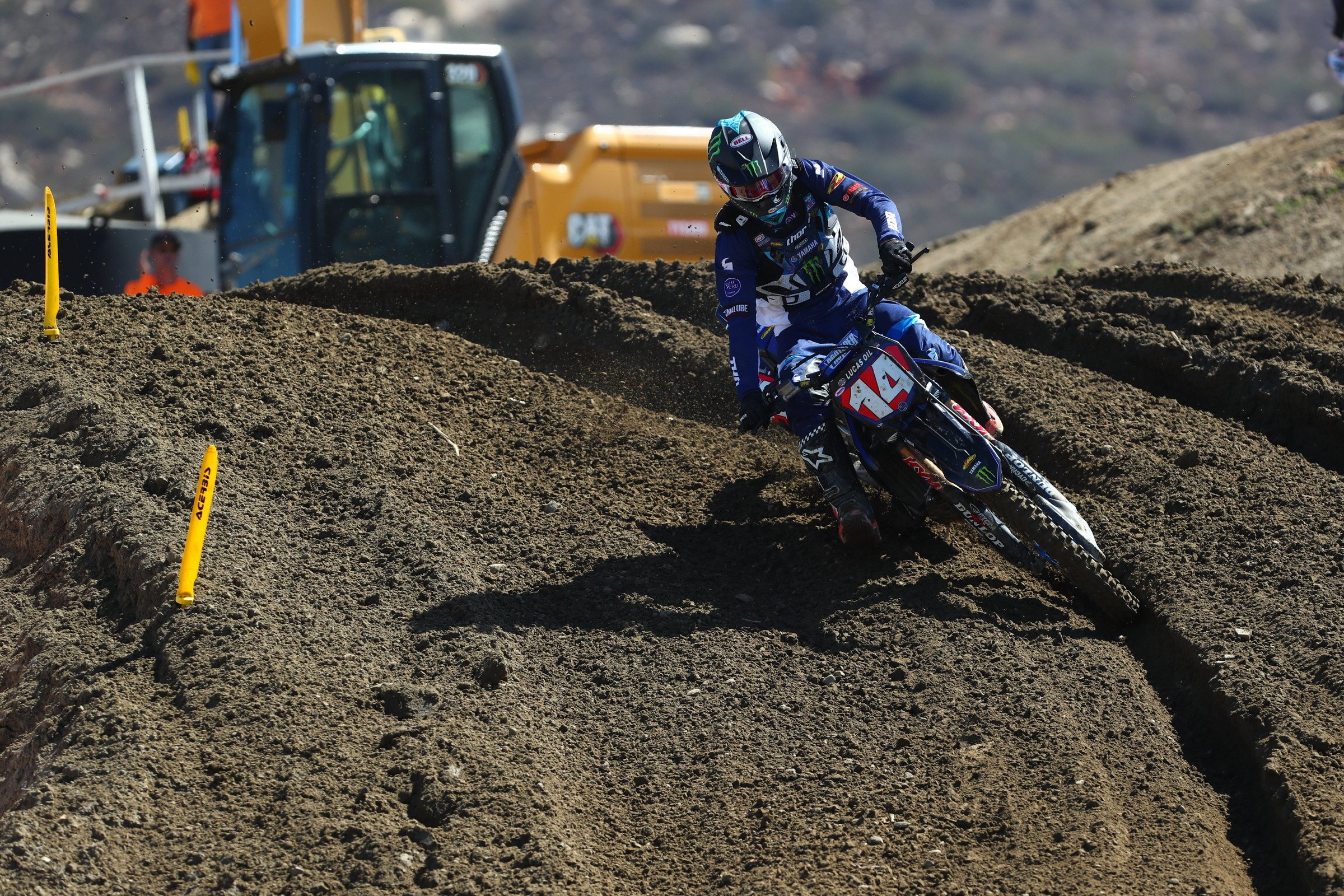 It’s heating up at Fox Raceway both literally and figuratively as the sun beats down on Pala and the riders in both the 250 and 450 Class laid down better times in the second qualifying sessions. With the track developing into a dryer surface and the track crew taking the time to fix some of the deeper sections, the lap times dropped significantly from Q1 to Q2.

The 250B group showed the biggest improvements as Rick Elzinga’s 2:20 from the first session was replaced by his own 2:10.452 in the second session. Until the A group went out, Elzinga was actually second fastest overall in qualifying, but he really didn’t drop too much from there.

As the A group in the 250 Class hit the track, it was clear Justin Cooper and Jett Lawrence were going to battle for pole position. Jo Shimoda was fastest early on, but Lawrence quickly eclipsed the Monster Energy/Pro Circuit Kawasaki rider’s time to lay down a 2:07.296. Cooper followed immediately behind and put down a 2:07.390 as the times continued to drop.

Then Cooper actually ran into some trouble in the form of Derek Drake crashing in a deep inside rut at the top of the hill. Drake was trying to get his Suzuki re-fired when Cooper jumped into the rut behind him, and perhaps shocked to see Drake, grabbed too much front brake and the front end dug in sending Cooper over the bars. His bike remained stuck in a tough position for nearly two minutes before finally he was able to get it pulled out and continue.

Perhaps the mishap lit a fire under him though as he then laid down a massive 2:06.989 with just under a minute remaining. The time was too much for Lawrence to have a response to and he remained second overall as Cooper qualifies P1 for the Fox Raceway 2 National.

In the 450 Class, once again Christian Craig and Eli Tomac both got out front right away and put instant hot laps down. While riders like Dylan Ferrandis, Ken Roczen, and Cooper Webb waited for a lot of the field to go through before heading out, Tomac was on a mission early.

The big #3 put in a 2:07.895 right away but Roczen wasted little time to eclipse that in the form of the fastest lap of the day at a 2:05.207. Roczen’s time remained the mark for much of the session from there on as Ferrandis put in a 2:06.793 but wasn’t anywhere near Roczen’s blistering lap.

But Ferrandis had one final lap to connect the dots and he did so in a big way. The championship leader crossed the line with the checkered flag waving having laid down a 2:04.861 right at the end of the session. It was enough to capture P1 in qualifying on the day as he relegated Roczen back to second with Cooper Webb sneaking in late to get third.

So, qualifying is now done from Fox Raceway and the motos will commence in about an hour and a half. Be sure to check out listings to find out where you can watch the Fox Raceway 2 National below: