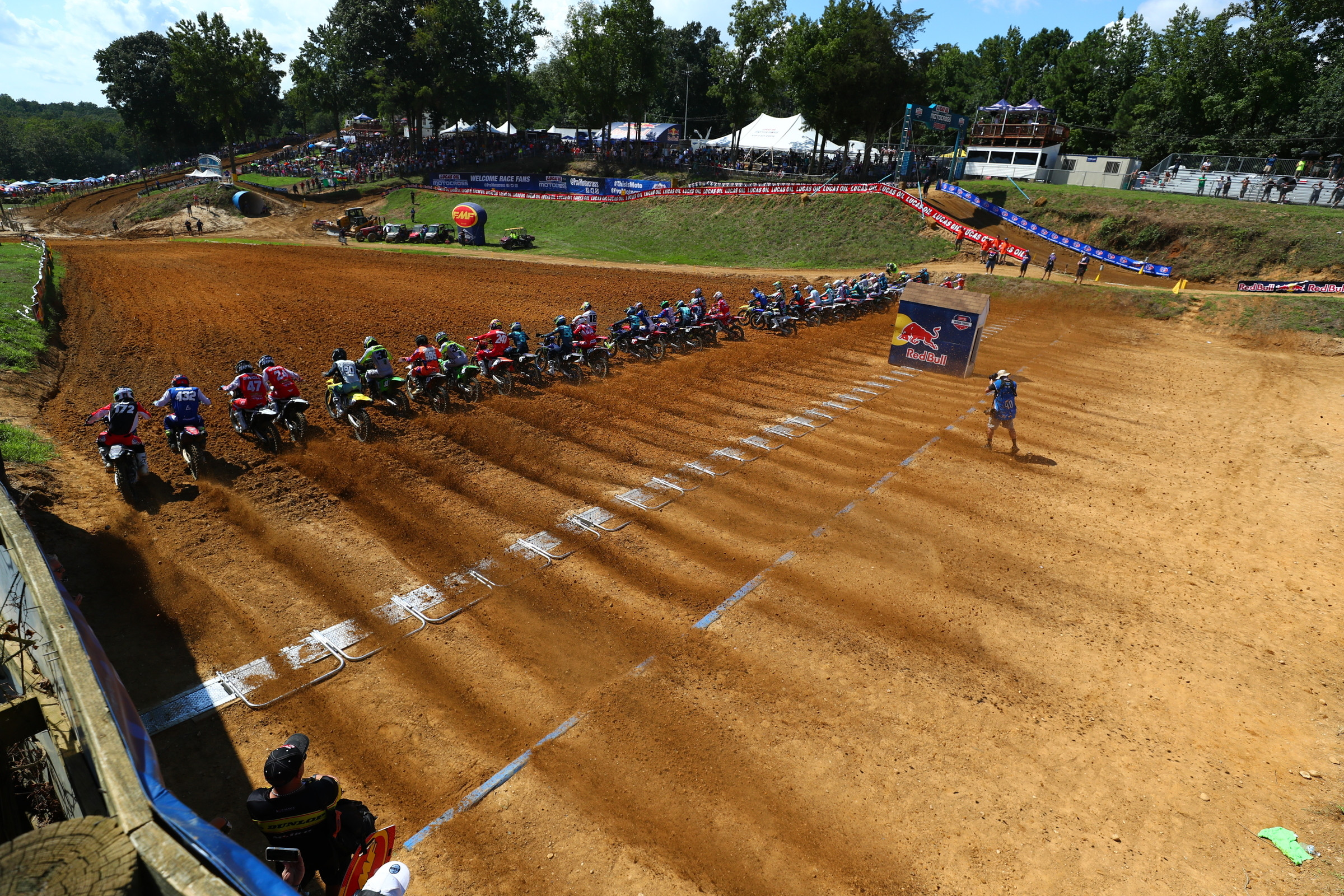 The second go round saw a Monster Energy/Star Yamaha Racing YZ250F grab the holeshot line but this time it was Jeremy Martin. Behind Martin, Jett Lawrence shuffled into second place just ahead of Ty Masterpool. Levi Kitchen and Jalek Swoll collided together on the backside of the huge hill by the announcers’ tower. Both had to wait Masterpool was putting in a great ride but dropped back a few positions when he went down in the same spot that Kitchen and Swoll had gone down. Right behind him was Hunter Lawrence, who managed to sneak around Masterpool without getting caught up on the #75 GasGas MC 250F. Out front, Martin was untouchable. Jett Lawrence tied to keep up with his former teammate, but J-Mart just laid a whooping down. He finished with an 8.846 second gap over Jett Lawrence. J-Mart’s 3-1 gave him the overall ahead of Jett Lawrence (2-2 for second overall) and Cooper (1-4 for third overall). The win was the 20th overall 250 Class win of Martin’s career, tying him with Steve Lamson for fourth on the all-time 250 Class wins list. Hunter Lawrence put in a solid ride to finish third, giving him 6-3 finishes for fourth overall. Now, with three rounds remaining, only three points separate Cooper and Jett Lawrence in the standings.

Coming off of a huge first-moto win (his third straight moto win in a row) Ken Roczen grabbed the holeshot and started to run away early. Cooper Webb, Dylan Ferrandis, Chase Sexton, and Eli Tomac. Sexton cut to the outside then inside of the turn leading up the big hill by the announcer’s tower and was able to sneak to the inside of Ferrandis. Ferrandis looked back over a tabletop and saw Tomac, who was pushing hard. Roczen had a 1.927-second lead over Webb but then Sexton made a pass for second and the two Honda HRC teammates started to pull away. Roczen opened up a three-second gap on his teammate, who responded by putting in a 1:48.787—the fastest lap of the race to that point. Tomac started going at Webb over the massive Big Gulp jump but it took ET3 about a lap until one of his passes stuck. In typical, ET3 fashion, Tomac went wide going over the roller after the finish line and blasted the outside of the turn to blow past Webb. Out front, Sexton began to reel in his teammate. Roczen navigated lappers—which seemed to be extra tricky throughout the entire day—which allowed the #23 to close up. At one point, Roczen, Sexton, Ferrandis, and Tomac were each going over one of the rollers in the turn before the finish line as the group tightened up significantly around the halfway point. A lap later in the same formation, Sexton had a mistake that he managed to save on the last roller, but it did slow him enough for Ferrandis to take over second place. In opposite fashion of the first moto when he went from fourth to second in a matter of turns, Sexton was quickly passed by Tomac to drop from second to fourth in about half a lap. Then, the lead trio tightened up even more so as all three were in the same turn with about eight minutes still left on the clock. Ferrandis managed to close up enough on Roczen for a successful pass attempt. As they came down the hill leading back to the bottom of the track that merges into the first turn, Ferrandis made an inside line work as he stood up Roczen, cutting off the #94’s line. Roczen held onto the rear fender of Ferrandis for as long as he could but eventually the Frenchman came through with the moto—and overall—win. Roczen claimed second just over four seconds back as Tomac came through another four seconds back. Sexton was dropped by the lead group but came through fourth, 32.708 seconds behind Ferrandis.

Ferrandis said on the podium after the race that he made a big change during the week that he is very happy with, saying it’s fun to race but it’s the most fun when you win. As for Roczen, he was content on his day, pushing his limits but just was not able to hold off Ferrandis in the second moto.

“I’m satisfied with a second place, I gave it all I had,” Roczen said.

With three rounds remaining, the gap between Ferrandis and Roczen remains the same since they traded moto scores both earning 47 points on the day. There are still 150 points available, but Ferrandis is inching closer to that Eddison Dye Trophy as time (and points) begin to run out.

“I was close that time,” Tomac said on his third-place second moto. “I felt much better that time than moto one. It was tough. It was tough, I did everything I could.”

As for Sexton, he said that his takeaway from the day was that he has the speed to run up with the lead group, but he is being ridden by his Honda CRF450R more than he is riding it. He said he’ll continue to work his butt off to try and get better.

Aaron Plessinger did not lineup for the moto as he deals with soreness following his crash at the Unadilla National last weakened.