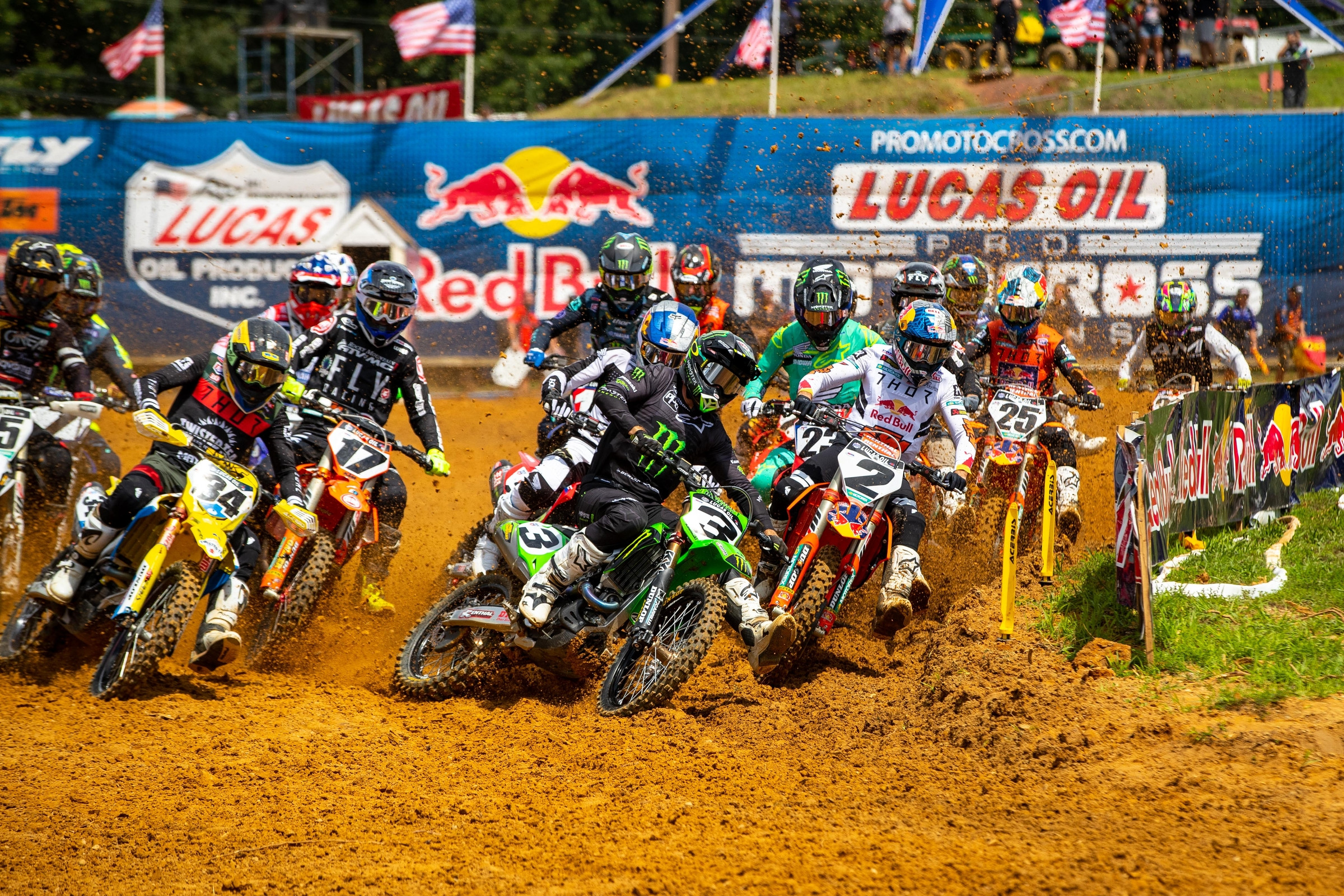 Our own Align Media and Mitch Kendra were at Unadilla MX for the ninth round of the 2021 Lucas Oil AMA Pro Motocross Championship. Simon Cudby, Rich Shepherd, Mike Emery, and Cole Beach all contribute here at Racer X and have created Align Media, a collective media group. Make sure to check back after each race for their best photos from race day and follow them on Instagram @align.with.us. Mitch works on the website during the week and sometimes runs around with a camera during race day.

Here is the action-packed racing from Mechanicsville, Maryland, explained through their lenses, with several post-race quotes and results added in.

For the seventh time this season, Justin Cooper was the fastest 250 Class qualifier. For the third week in a row, the #32 topped qualifying, dominated moto one...and then finished off the podium in the second moto to give up the overall.

“Tough day, I kind of struggled all week with energy and just didn’t feel well coming in,” Hampshire said. “I tried to do my best today – I had good speed but a few crashes ended up costing me pretty bad. We battled hard and had a big effort for the results, so I’m kind of bummed on that but I’ll move on and be ready for Indy.”

Hampshire was battling his teammate Jalek Swoll for third place when he crashed. After a great start, Swoll had a solid first moto. Unfortunately, a first-turn crash with Levi Kitchen caused the two to both fight from the back of the field. Swoll made it to 15th in the moto to finish 5-15 for tenth overall.

“The day started off pretty good and I felt really good on the bike, so I was pretty pleased heading into the racing portion,” said Swoll. “I was running in second for a while in Moto 1 and that’s obviously where we want to stay but we’re learning every time on the track and we’ll take a top-five. Second moto, I tangled off the start with another rider and that put me really deep in the pack and I was only able to come back to 15th. It’s a bummer, I feel like my riding has been pretty good and I’m ready to fight for these podiums but things just aren’t going my way and that’s racing, so we’ll take what we got and be ready for the next few rounds.”

When the gate dropped on the second 250 Class moto, a Monster Energy/Star Yamaha Racing YZ250F dominated the field. But this time it wasn't the #32, it was the #6 of Jeremy Martin. The Minnesota native led the race wire-to-wire, gapping second-lace finisher Jett Lawrence by 8.846 seconds, although he was really uncontested for a majority of the moto. After finishing 3-1, the #6 earned his third overall win in 2021. Unfortunately, after early season injuries, he is essentially out of the title fight.

“Today was alright. It was okay,” Hunter Lawrence said on his day. “The first moto was kinda tough. There were a few things out of my control, with the clutch breaking, and I ended up running out of tear offs, which was my control. But yeah, just another bad start, I spun straight away, so I had to bring it home the best I could, which was difficult without the clutch. It was tough. ...Second moto was better. I am happy to get that one under the belt...”The second moto was good, a moto podium. We’re content with that.”

In the post-race press conference, the Lawrence brothers addressed the rumor that has been spreading about their status for the Monster Energy FIM Motocross of Nations.

"Yeah, I'm definitely out. I can speak for both Hunter and I, we wanted to do it. But people higher than us we’re allowing us. ...Unfortunately, it's out of their control."

“Yeah, I guess that cat is out of the bag,” said Hunter Lawrence. “Yeah, it sucks. If it were completely up to Jett and myself, we were ready and completely want to race it. With everything going on, it’s not really up to us to decide. It’s such a cool event. It’s cool to represent your country. ...It’s a bummer to miss it. ...With both of us racing together we were looking at a really good team. Hopefully next year it can be a little more normal and we can be there.”

After engaging in a hot-lap battle with Ken Roczen during qualifying, Dylan Ferrandis broke his chain completely off in the last session but was lucky to walk away without even crashing. He went on to claim his fifth overall win of the season, even after Roczen held him off in the first moto.

Then in both motos, Ferrandis and Roczen battled to the checkered flag. Both times Roczen had a better start and tried to hold off the #14: it worked in the second moto as Roczen claimed the win by 0.328 seconds but Ferrandis overcame his title rival in the second moto to win by just over four seconds.

At one point during the second moto, it appeared Eli Tomac was going to charge forward and into the lead. He had the fastest lap of the race (a 1:48.376) and was gaining on Roczen and Ferrandis but was not able to move higher than third. He finished 4-3 for third overall.

"It’s good to be at the front of the race," Tomac said on his day in the post-race press conference. "I'm happy with riding. Good second moto. We're close, right, we're so close. Just still getting beat. ...We’ve been so close. We want to do it [get an overall win this season]. It's very well possible. Need to get that first moto dialed in."

Chase Sexton finished 3-4 for fourth overall. He put in solid rides but was beat by experienced veterans, and knows he needs to continue to improve.

“It was pretty mediocre,” Sexton said on his day. “I qualified fourth, which was okay. I just didn’t, I don’t know, I wasn’t riding that great in practice. First moto came around and I started off slow and I got on a good one and made a few passes and got onto the back of Kenny. I made a few mistakes and Dylan got around me and then, so I ended up third. Second moto, I did the same thing, got to the back of Ken, made a big mistake, almost crashed, and that was pretty much all she wrote. I was giving it my all but that was definitely not good enough today. So, we’ll go back to work. I look forward to Ironman, that’s on my home races and I like that terrain. So yeah, just keep going and plugging away.”

“Today was a step in the right direction," Webb said. "I got a great start in Moto 1, pulled the holeshot and ran up front for a little bit, ending up fifth. Second moto, I was running with those guys up front and they were really riding fast, I tried hanging in there as long as I could. I had a good battle with Marvin at the end and we were able to catch Chase Sexton there but ended up sixth in the moto and fifth overall, which is the best result so far this year. I’m looking forward to going to Ironman next, it’s my favorite race of the year!”

Two hometown(ish) boys showed out in the 450 Class. Justin Rodbell finished in a season-best 12th overall and Coty Schock put in a career-day, earning both a new career-best moto finish (seventh in moto one) and a career-best overall finish (ninth overall) on his #72 CRF450R.

“Qualified ninth in the first qualifying," Rodbell said. "Pretty sure I was 15th in the second one. It was a great day. I went 12-14 for 12th, I think. Best day I’ve had this year. Great track, great crew here. Made some changes to the bike this week, actually. Tried a different shock. So, we’re trying things. Getting better. So yeah, it was a great day. I’m thankful to have the SGB crew helping me and with what happened out there. And just everyone, man, it was a great day. Seeing all the locals here cheering me on, that was badass. I don’t think I’ve ever had that much support in my life. For being a kid like me, it feels pretty cool to have a day like today. I’m just blessed to have the day. Man, I can’t complain, it was a great day. Rode dirt bikes and had fun.

“Can’t complain with all the support I’m getting, dude it’s badass," he continued. "We’ll keep it going. We’ll try and get some better results at ironman.”

“Today was pretty good for me,” Schock said. “Another step in the right direction. Went 7-11 for ninth overall. first moto, got a good start and just kinda kept it there. ...I was like, ‘Heck ya, that’s pretty cool!’ Second moto, the jump was okay. And then a few of us went down in the first turn, it was kinda a domino effect. [Dean] Wilson and I literally both came from last. I’m not sure what he got second moto, but I came from 40th to 11th. And for me to do that type of ride, it goes to show that I belong up there. It was a really good ride for me. I gave it 110 percent, everything I had. To get tenth overall last weekend and to get ninth overall this weekend, I’m like, “That’s pretty cool!’ So we’ll just keep building and enjoy riding our dirt bike honestly.”

“It goes to show that hard work does pay off. And just trying to be patient, and it’s been good. ... To do it in front of the home crowd, that was awesome,” Schock said on his career-best day. “It’s cool. Having the people yell my name out on the track when I’m tired, definitely gives you a little boost of energy. So, I’m very fortunate for them. The fans were awesome. It’s sick to see. The track was amazing, the crew crushed it, we got lucky with the weather. It was good for us.”