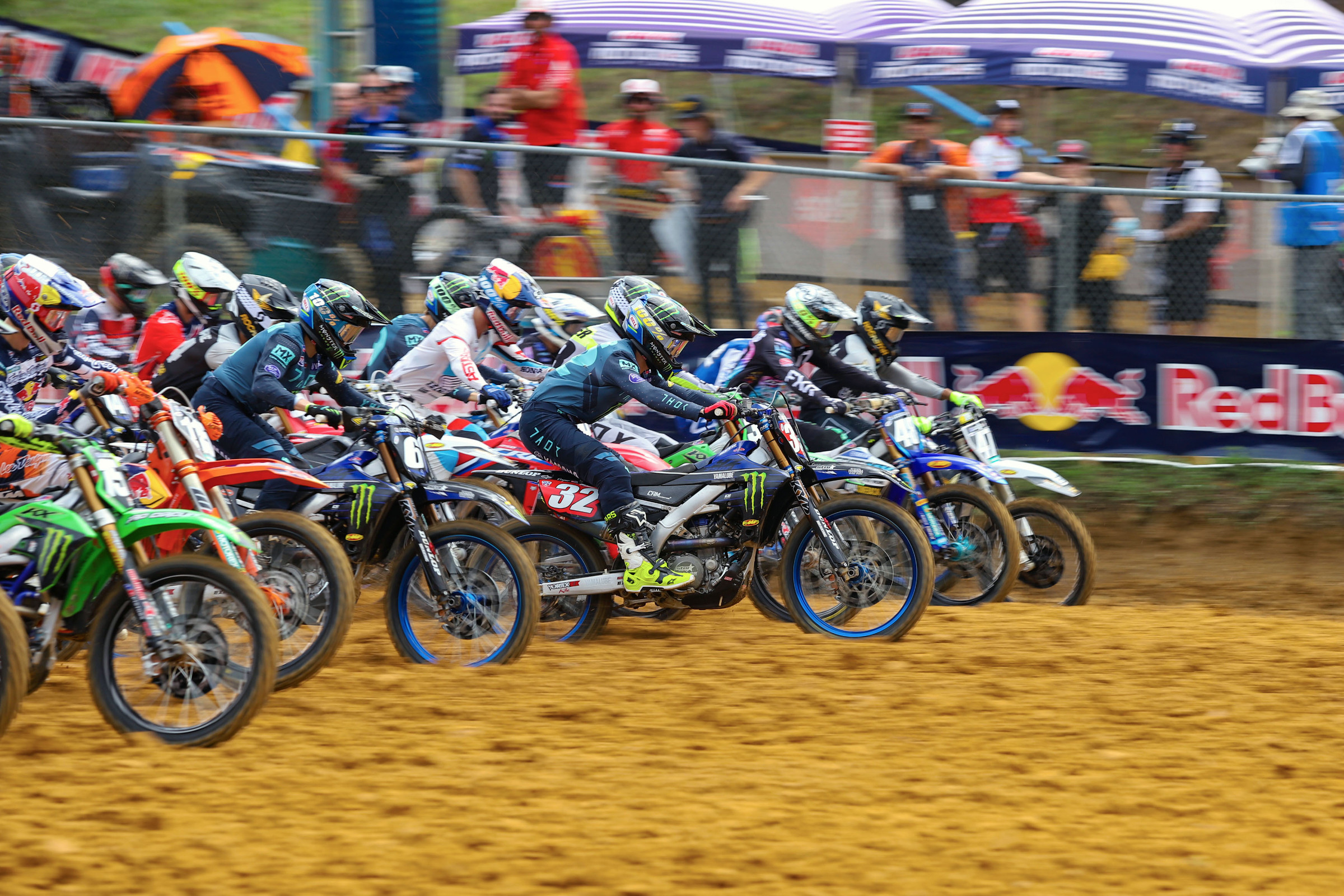 If you missed our morning report for everything leading into today’s race, make sure to check it out, and view our qualifying report as well.

As the gate dropped here in Maryland, Justin Cooper grabbed the holeshot ahead of Jalek Swoll and Austin Forkner. While trackside, I heard a big “Let’s go!” from Mike Brown, who helps trains Swoll and others as a part of the Baker’s Factory. Cooper led Swoll, Forkner, Garrett Marchbanks, RJ Hampshire, Jeremy Martin, Jett Lawrence, Ty Masterpool, Max Vohland, and Jo Shimoda. Forkner managed to get around Swoll quickly as he shuffled into second place.

The turn coming back onto the bottom part of the track that goes past the mechanics’ area knabbed a few riders—including Levi Kitchen and Hampshire, who both went down in separate tip overs. Kitchen dropped his Yamaha there early and lost several positions. Hampshire had just made it around Marchbanks and his Husqvarna teammate Jalek Swoll to take over third place when he tipped over, dropping back to eighth place. Hunter Lawrence had to fight through a battle of Masterpool, Vohland, Shimoda, and Seth Hammaker. Marchbanks had a crash that dropped him out of the top 15 and then had to pull into the pits after 13 laps. His moto was done as he rode back to the pits with his mechanic. Jett Lawrence made a charge from outside the top five into second place. Late in the race, Shimoda and Hunter Lawrence were battling for sixth when the Honda HRC just barely bested Monster Energy/Pro Circuit Kawasaki’s Shimoda as the two went into the rollers in the final turn before the finish line. Cooper took the race with 5.335 seconds back to Jett Lawrence.

The gate dropped on the first premier class moto of the day and it was Cooper Webb and Eli Tomac who went into the first turn ahead of the field. Webb quickly got to the holeshot stripe and lead as Tomac slid wide in the first turn. Christian Craig and Justin Bogle went down in turn one as the field shuffled into position. Ken Roczen snuck into second ahead of Tomac, and just as quick as fast, the #94 snuck to the lead! Roczen got around Webb as they went up the big hill by the announcer’s tower. Craig had another get-off as he was thrown from his Yamaha on the last roller before the finish line. The #29 eventually finished only five laps before pulling off the track. His teammate Aaron Plessinger, banged up from last weekend, had to pull off himself after 11 laps, recording 36th. As Tomac sat third behind Roczen and Webb, Chase Sexton put on a push. Tomac snuck around Webb but suddenly, the #23 went from fourth to second as he passed both Webb and Tomac in a matter of about two turns! Sexton and Webb were side-by-side going over Henry Hill. Sexton pushed hard to the inside and then blasted in the following turn to get around Tomac. Dylan Ferrandis starting to make his way to the top group. Ferrandis got around Webb in the same spot that Tomac got around the #2 (in the turn before the big uphill Fly Racing Triple) and then he went after Sexton. Ferrandis went after Tomac and pulled off a pass for third in the roller section turn before the finish line. Out front, Roczen had a seven-second lead, but Sexton started to keep Roczen honest, cutting into the #94’s lead slightly. Sexton eventually cut the gap to 2.9 seconds as he was running 1:51s compared to Roczen’s 1:53-1:54s with about eight minutes still on the clock. Roczen started lapping into the 20s and would eventually lap up to 11th place (Kyle Chisholm). Ferrandis kept pushing though, catching up to Sexton. Then those two went over Henry Hill side by side. On the outside, Sexton was about to land on a lapper when he had to slightly checkup. But Ferrandis made a clean pass on the inside as he pushed hard deep into the inside of the corner. With three seconds to go, Ferrandis pushed towards Roczen. The Monster Energy/Star Yamaha Racing rider made it up to the rear fender of Roczen as the two were then in the same turns together as they came around the last half a lap! Roczen lost drive in the turn by the mechanics’ area as he looked back, while Ferrandis continued to push. Roczen shut the door on the landing of the jump at the holeshot stripe and he held on for the moto win! At the checkered flag, only 0.384 seconds separated the two at the finish.

“It was really difficult with the lappers. ...It was diffuclt for sure. A win is a win, as long as we get full points,” Roczen said after claiming his third straight moto win in a row.