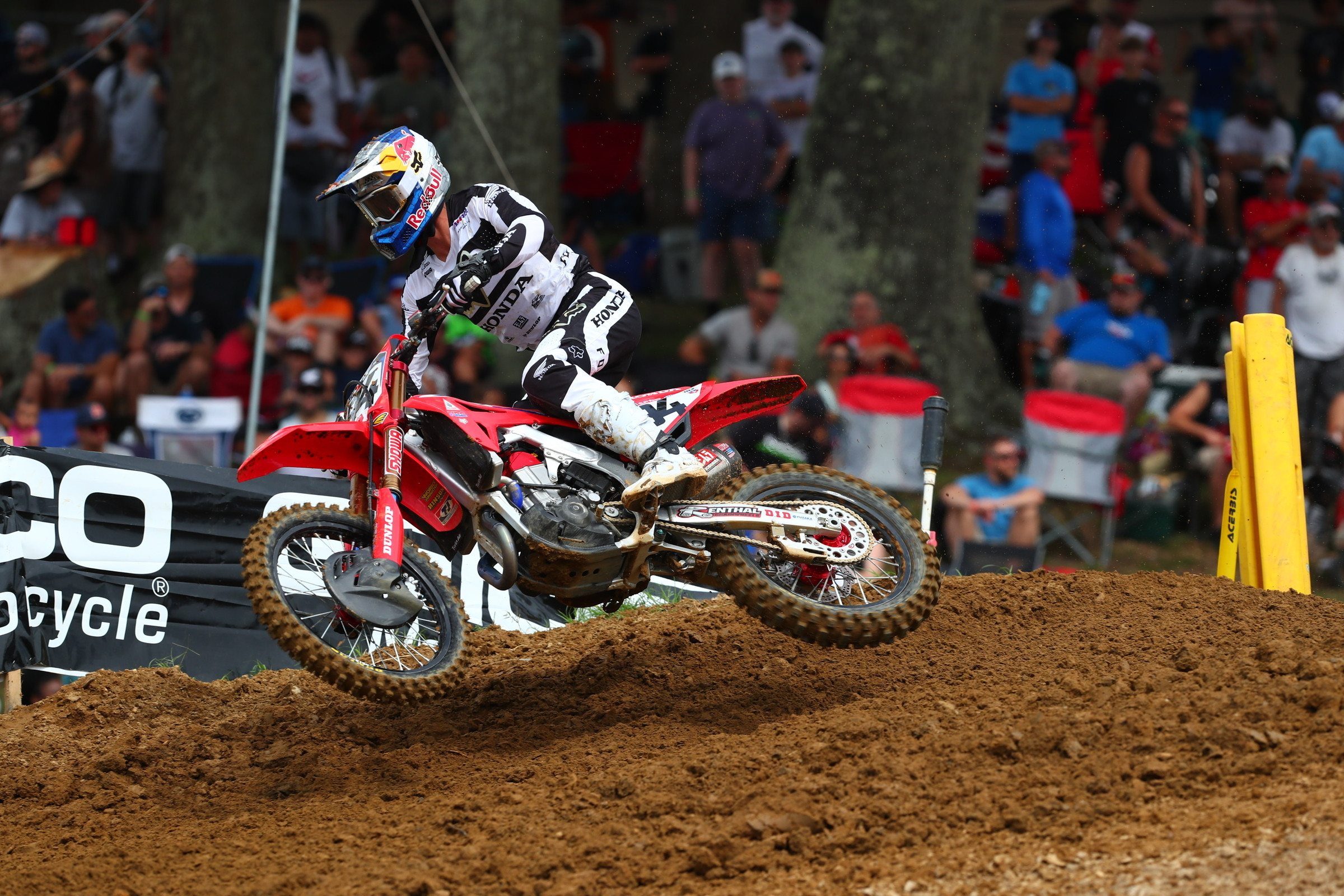 If you missed our morning report for everything leading into today’s race, make sure to check it out.

During the first 250 Class group B qualifying session, it was Devin Simonson who topped the field. Brandon Scharer, Jack Rogers, Jared Lesher, and Kaeden Amerine (in his pro debut) rounded out the top five.

In the first 450 Class B group, Dawson Ryker led the field by over two seconds. Behind him was Tristan Lane, James Harrington, Bryce Backaus, and Nathan Augustin rounding out the top five.

In the second session of the day, Kaeden Amerine once again topped the field early on. ClubMX Yamaha’s Brandon Scharer had a big get-off right after the finish line. He slammed down hard and took a few minutes to get back and going. Scharer was racing at the Monster Energy AMA Amateur National Motocross Championship at Loretta Lynn’s Ranch in early August and broke his sternum, so he took about two weeks off in order to recover from today. Another hard slam to the ground was probably the last thing he wanted. (I checked in with the #307 after the session and he said he’s banged up and is sore from the crash that knocked the wind out of him but he’ll be ready when the motos come later this afternoon.) With a few minutes left on the clock, the session was red flagged when Andrew Rossi, who crashed on the uphill triple going up before the off camber. Rossi was taken off the track on a stretcher. The group resumed the last bit before the checkered flag waved but Amerine’s time stood at the top.

When the top 250 Class riders took to the track for the final time, it became a hot-lap battle between Justin Cooper and Jett Lawrence. The two battle back and forth for the top spot. Seth Hammaker, who was third in the first session, had bike issues that kept him from putting in a hot lap for a majority of the session. But with the times getting faster in the second sessions of the day as the track continued to dry and develop, the #150 was finding himself dropping in the overall standings. Fortunately for the Kawasaki rider, he was able to get out onto the track at the very end of the session and put in a hot lap that got him into 19th.

When the checkered flag waved, Cooper took the top time of the day. This was the seventh time that Cooper stood atop the 250 Class overall qualifying.

The green flag waved on the final 450 Class group A qualifier, Brandon Hartranft and Chase Sexton led the group around. Sexton started his first heater lap and then tipped over only a few turns later in the rutted, off-camber turn up at the top of the track near the announcers tower. He landed face first but got up and going again no problem. When the times started rolling in, Cooper Webb momentarily led with a 1:51.621 before he was passed by a trio of Eli Tomac (1:50.604), Christian Craig (1:51.404), and Dylan Ferrandis (1:51.201). Then, Ferrandis dropped the hammer with a 1:49.800, skipping right over anything in the 1:50s. But immediately after Ferrandis’ time registered, Roczen bested it with a 1:49.277. Then again, Ferrandis dropped another heater 1:49.075 that was once again followed by an impressive 1:48.983 from the #94! Suddenly, Ferrandis was off the track standing next to his bike, pushing it todays the mechanics’ area. He was missing his chain! He had already secured a top spot in the overall qualifying and the clock was winding down, so he took his helmet off as he was greeted by his mechanic. He hitched a ride back to the pits on a Rockstar Energy Husqvarna cart as his Yamaha employees pushed his bike to the pits. A late push from Tomac (1:49.511) and Sexton (1:49.602) made four riders under the 1:50 mark. Roczen’s incredible fast lap gave him the fastest qualifier for the fifth time this season.